In the first of our series recalling unbuilt projects Philip Goad introduces Robin Boyd’s proposal for the 1972 World Exposition.

In November 1964, Robin Boyd was invited to formulate concepts for a World Exposition to be held in Melbourne in 1972. Boyd produced a diagrammatic sketch in 1965 embodying one of the Expo sub-themes, Living Together. He drew a 250-acre urban plan, with a series of concentric circles representing the rings of social organization that surround the individual, and radial lines representing man’s ideas and activities. Overlaid onto this system of concentric circles was a landscape of rivers, lakes and a sports oval.

Boyd argued that the Melbourne fair needed “something so new, so bold, so unprecedented as to set it apart from all previous expositions and to put it into the “Eighth Wonder of the World class … This means essentially, a structure of some breathtaking quality or magnitude.” His idea was a “space envelope”, an enormous translucent canopy enclosing the whole exposition, possibly a giant geodesic dome of light framing and plastic as developed by Buckminster Fuller. The idea of enclosing an entire precinct in a controlled environment was Boyd’s way of describing urban unity at Expo 72. It was also a recurrent theme in his built work: encapsulating an ideal world within a single structure.

Residual uses for the site after the exposition were also explored, with the retention of Boyd’s model suburb, an intrinsic part of his original proposal, favoured. For Boyd, this suburb of around 50 houses would be “an idealistic projection of Australia’s characteristic suburban way of life.”

Philip Goad is professor of architecture at the University of Melbourne.

The AA Prize for Unbuilt Work – an opportunity to recognize the unbuilt gems of today. Entry details available soon.

The 1979 competition for the design of the New Parliament House in Canberra attracted 329 entries from Australia and overseas. The winning scheme by architects Mitchell/Giurgola and Thorp was ultimately built and opened amid much fanfare in 1988. The other 328 schemes received little publicity and remain in relative obscurity. Architects invested large amounts of time and money on the submissions and in today’s terms the combined effort required to submit these entries would be over ten million dollars.

A number of the schemes reflect the architectural avant-garde of the late 70s, the submission by Swetik Korzeniewski being a case in point. Inspired by the work of Louis Kahn, it offered an antipodean interpretation of Kahn’s formal concerns that we see embodied in his National Assembly Building at Dhaka in Bangladesh (1962–1974). Korzeniewski’s project reflected Kahn’s planning strategies at Dhaka, where the main assembly chamber was enclosed within a circular ambulatory passage, on the outside of which were arranged monumental forms. The Korzeniewski scheme established a separate circulation element to which monumental abstracted forms were both embraced and connected. The baroque-inspired forecourt enclosed by this colonnade was open to the public and contained the two houses of parliament and public galleries. The real and symbolic transparency of this arrangement reflected the democratic entreaties of the competition brief in aligning public access with government accountability through the scheme’s primary urban gesture. The project demonstrated a clarity of expression and powerful response to the egalitarian mood of the 70s (we mourn its passing) without compromising the status of the seat of government.

Andrew Hutson is a senior lecturer in architecture at the University of Melbourne.

The AA Prize for Unbuilt Work – an opportunity to recognize the unbuilt gems of today. Entry details available soon. 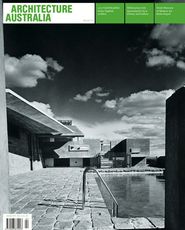