Clever geometry, attention to detail and a subtly handled, robust material palette work to humanize the notoriously lean typology of student housing in this new project by Bates Smart.

Based on a cloister model, the taller blocks step north to south, while transverse blocks are lower to limit overshadowing to the courtyards.

The current boom in the provision of student housing is being felt across almost every university in Australia. The traditional model was one based on the pastoral care of religious organizations. They were places where country folk could send their sons and daughters to the city and be confident that they were being cared for: food, cleaning and tutoring were provided as part of a fully catered experience. Many people remember their time at university colleges with great fondness – not just for the friendship and the camaraderie, but also because these were the places where young eighteen-year-olds could finally escape the yoke of parental control and seek out the youthful rites of passage of booze, sex and dangerous ideas.

The Kensington Colleges (TKC) at the University of New South Wales (UNSW) is a part of this tradition, though it never had the backing of a church nor quite the history of the sandstone colleges at the University of Sydney – the traditions of which hark back to the colleges of the Universities of Oxford and Cambridge in Britain, which first started around the thirteenth century.

TKC was originally three colleges: Basser (built 1959), Goldstein (built 1964) and Philip Baxter (built 1966). Basser, Philip Baxter and the two residential halls of Goldstein have been totally rebuilt, and two new colleges added: Colombo House, designed as self-catering seniors accommodation with ensuites and use of a common kitchen; and Fig Tree Hall, with male- and female-only floors, ensuites and a no-alcohol policy, which caters for Islamic students. The new development also contains new teaching spaces under the Colombo courtyard and some unallocated ground-level spaces that are being taken up and fitted out by other university services. While these colleges still provide accommodation for regional Australian students, increasingly they are catering for foreign students, particularly those from South-East Asia.

The original Goldstein College was designed by then New South Wales Government Architect E. H. Farmer and project architect Peter Hall and received the Australian Institute of Architects’ Sir John Sulman Medal in 1964. It included two halls of residence dedicated mainly to female students and the Goldstein Dining Hall, which served all three colleges. Only the dining hall and courtyard – containing a bronze sculpture by Bert Flugelman – remain, and these have been restored under the guidance of Tanner Kibble Denton Architects.

Richard Crookes Constructions teamed up with Bates Smart and Aspect Studios on the successful proposal for the design and construct competition. However, this does not feel like a project procured through a design and construct process. There are no obvious shortcuts in the completed building and there is an attention to details that is normally “value-managed” out of such a process – for instance, the use of cut-down precast wheel stops to provide a base course to external brickwork supported by expressed edge concrete slabs. This neatly deals with the expression of weep holes, cavity flashing, drip edge and consistent shadow line – always difficult along the bottom course of brickwork.

Located at a level change within the UNSW campus, the stepping topography of the site generates a series of terraced forms that becomes a device for decreasing the apparent scale of the buildings along High Street. Over nine hundred students are accommodated across the five colleges, but the expression is one of a series of smaller buildings – giving the neighbourhood the community feel necessary for a successful college.

Loosely modelled on a cloister typology, the project features a permeable ground plane, with cross-site links integrating the colleges into the tidal movement of students around the campus. The massing diagram is simple and rational. The taller blocks (ranging from five to eight storeys) run north–south and step up the site, while the lower, transverse blocks (which step from four to six storeys) complete and frame the courtyards with limited overshadowing.

Courtyards, lounges and dining spaces concentrate the life of the colleges and provide spaces for shared college functions. The courtyard designs subtly assist in negotiating the level changes and incorporate an intelligent mix of intimate and group activity spaces.

The upper-level accommodation sits on a one- to two-storey base that contains the communal areas, deans’ apartments, public spaces and teaching areas. Rooms are arranged in floor-by-floor cohorts of between thirty and forty rooms, and then further divided into four-room clusters. These clusters aim to mix junior and senior students as well as students sharing similar courses, continuing the tradition of pastoral care.

The facilities and character of each room do vary: some have ensuites, some single balconies, shared balconies or no balconies. However, the rooms themselves are designed to a very strict space formula that leaves little for the architect to play with.

Balconies have been used cleverly to modulate the elevations and vary shadows and projections. Some mimic the original Goldstein and Philip Baxter balconies as tiny pushed-out cubes of space. Facing into the courtyards, zigzagging facades help to make a variety of balcony shapes – from small triangles to larger diamonds that are shared by four adjoining rooms. The zigzag also allows the internal corridor to widen, creating a small ante-space outside each four-room cluster and dissipating the long narrow corridors that traditionally plague colleges.

Brick is the language of the project. The dappled effect created by different coloured bricks most closely references the multi-toned clinker bricks of the original Goldstein and Philip Baxter colleges, which portrayed the raw warmth of 1960s Sydney School architecture. While the new glazed brick is laid as a flat plane, a smattering of darker bricks appears to imitate the shadows cast by the random protrusions typical of clinker bricks. With the glazed bricks, colour has been used both to reinforce the identity of each college and to introduce a more playful, less dour palette than that of the previous buildings.

This is the most successful of the recently completed colleges on the UNSW campus and sets a new benchmark. The sheer scale of accommodating over nine hundred students has been achieved without the institutional sameness of the UNSW Village just down the road, which caters for a similar number.

That two-thirds of UNSW’s first Sulman Medal-winning building has been demolished is a blemish on an otherwise exemplary project. Bates Smart has responded to the contextual clues from the original buildings – particularly Goldstein College – and, within the constraints of the required yield, designed a precinct of urban forms that modulate scale successfully. However, the remaining Goldstein Dining Hall is somewhat overwhelmed by the scale of the new development and really needed the existing halls of residence – or at least one of them – preserved. 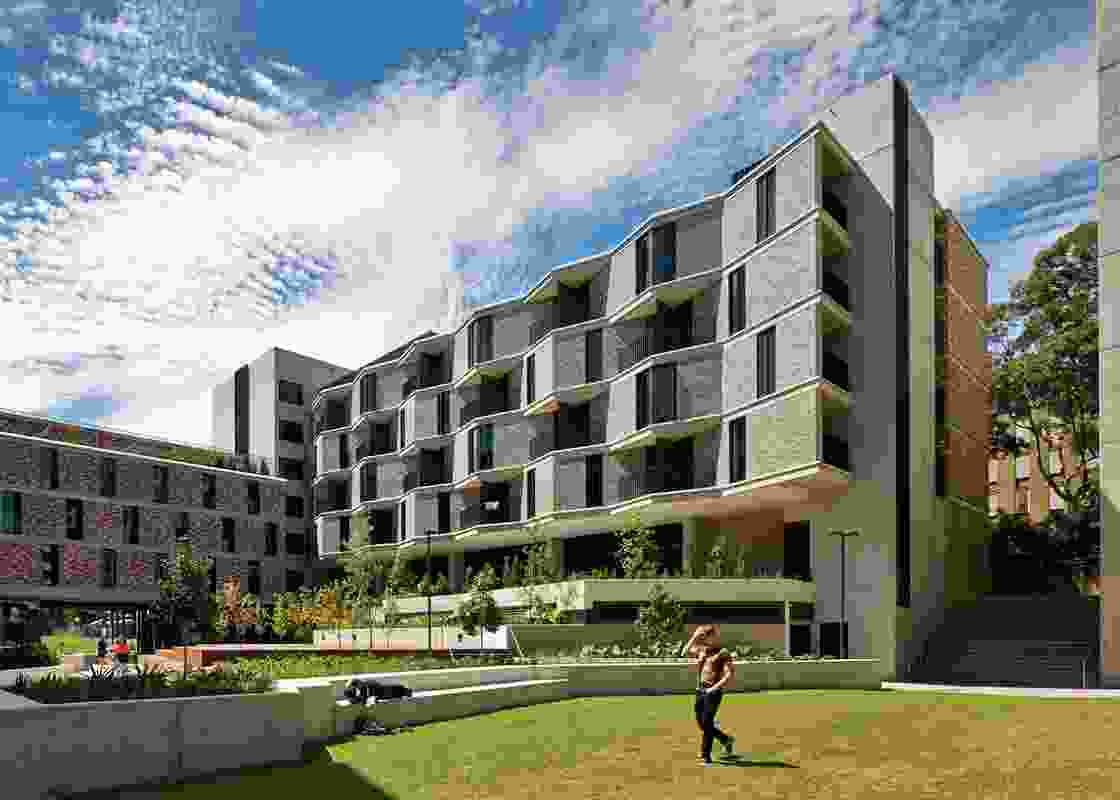 Based on a cloister model, the taller blocks step north to south, while transverse blocks are lower to limit overshadowing to the courtyards. 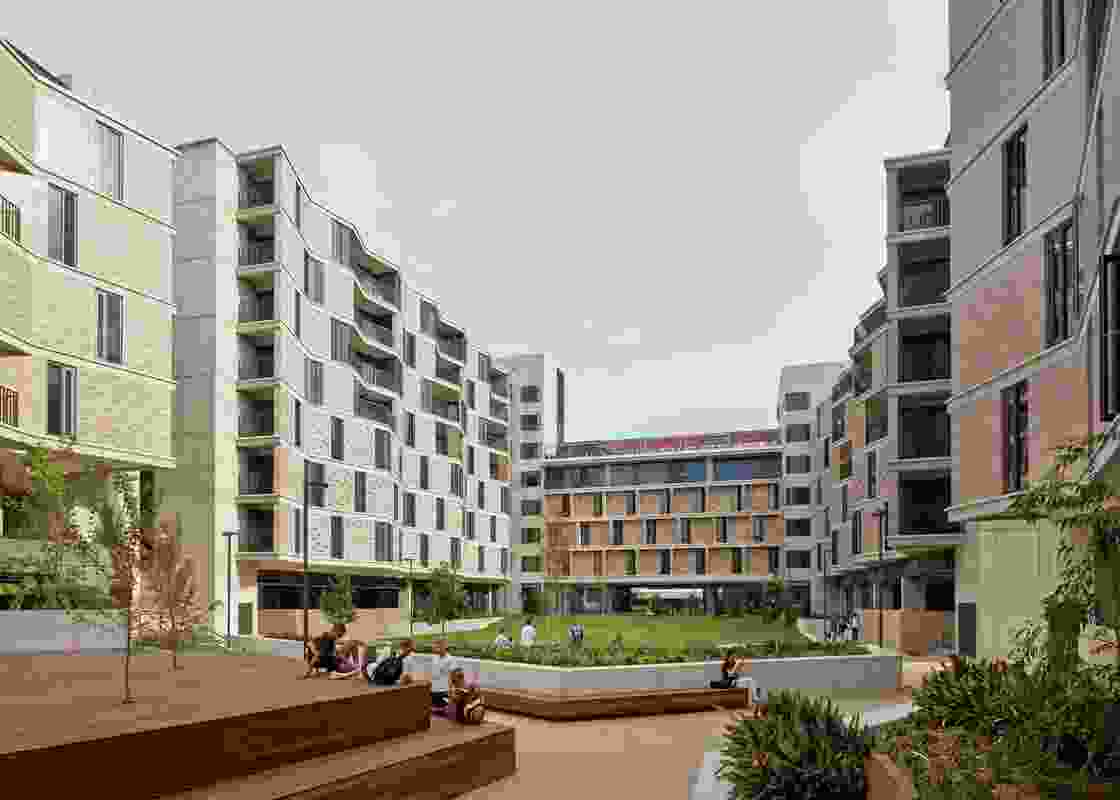 Over nine hundred students are accommodated by the project, yet it reads as a series of medium-scale buildings, giving the complex the neighbourhood feel necessary for a successful college. 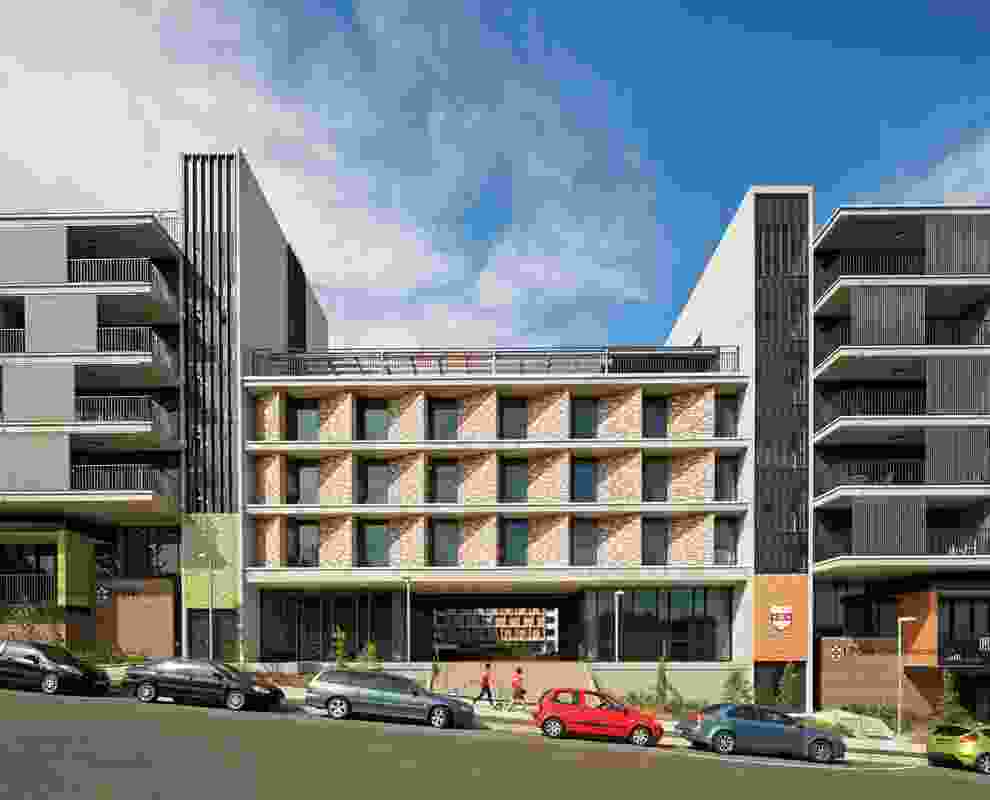 The stepping topography of the site generates a series of terraced forms that becomes a device for decreasing the apparent scale of the buildings along High Street. 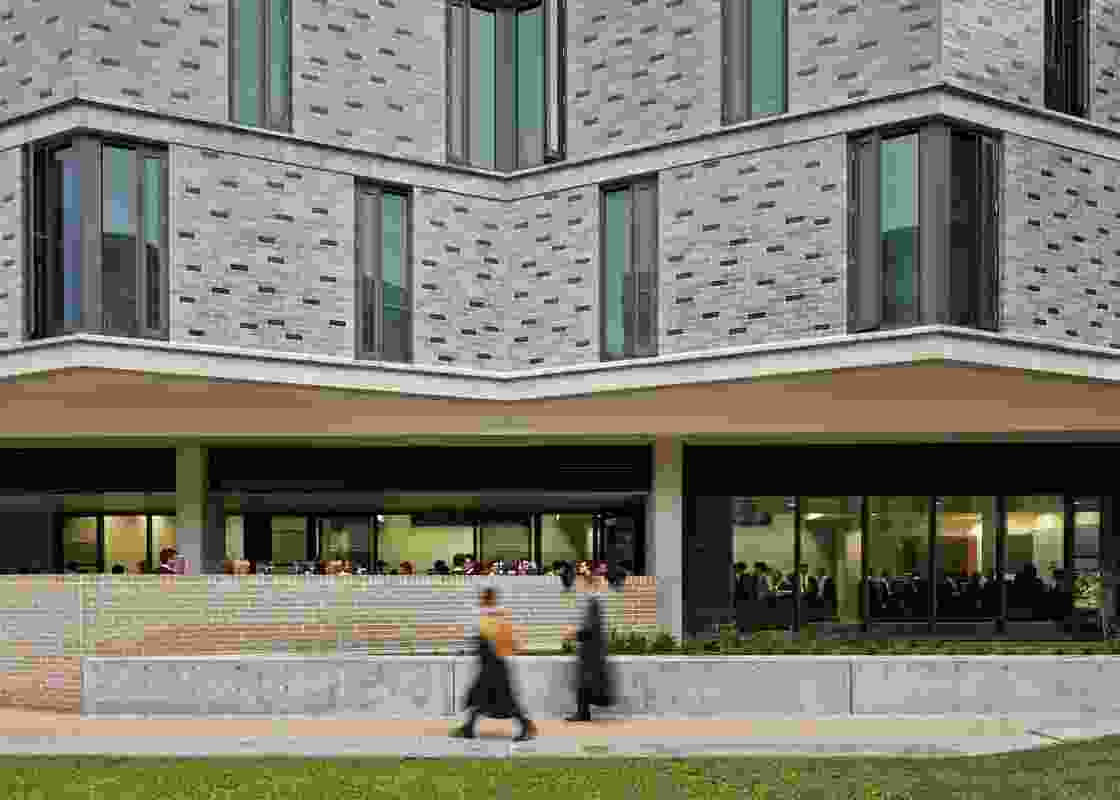 Darker bricks appear to imitate the shadows cast by the random protrusions typical of clinker bricks, adding texture and variation to what is in actuality a flat plane. 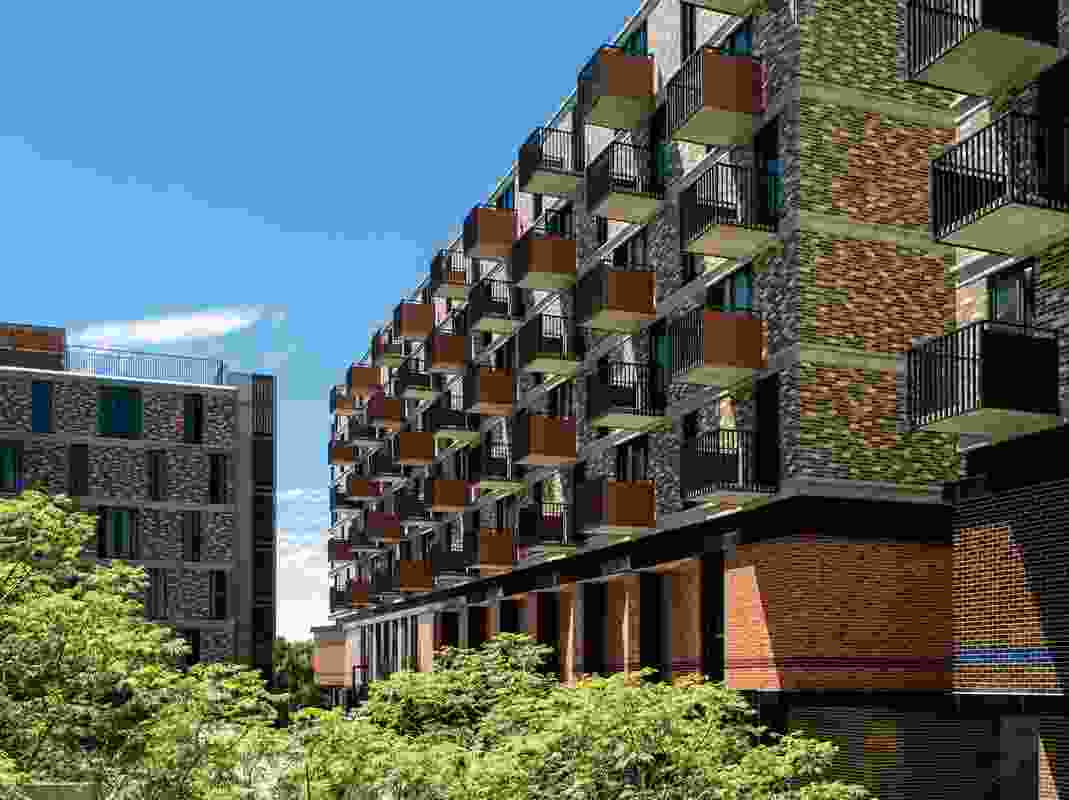 Some balconies mimic the balconies of the mid-century modernist Goldstein and Philip Baxter Colleges that were previously on the site. 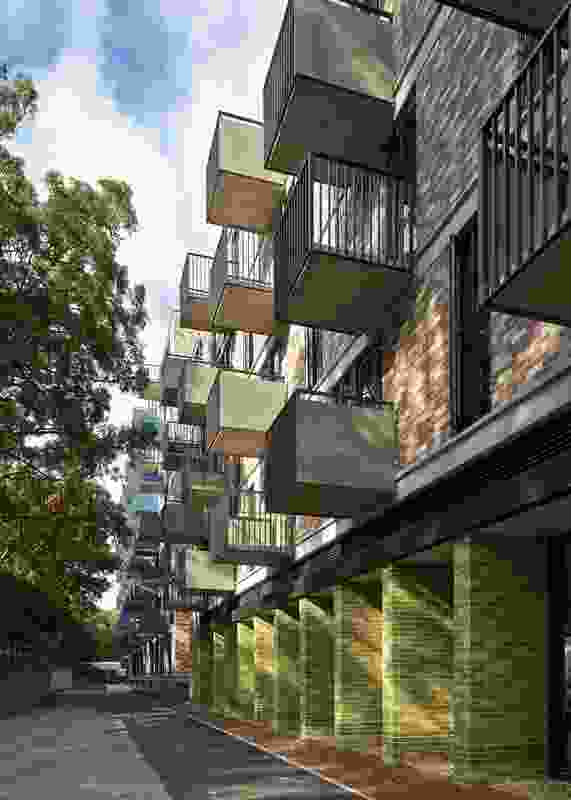 Colour has been used judiciously to enliven the buildings’ repetitious elements. 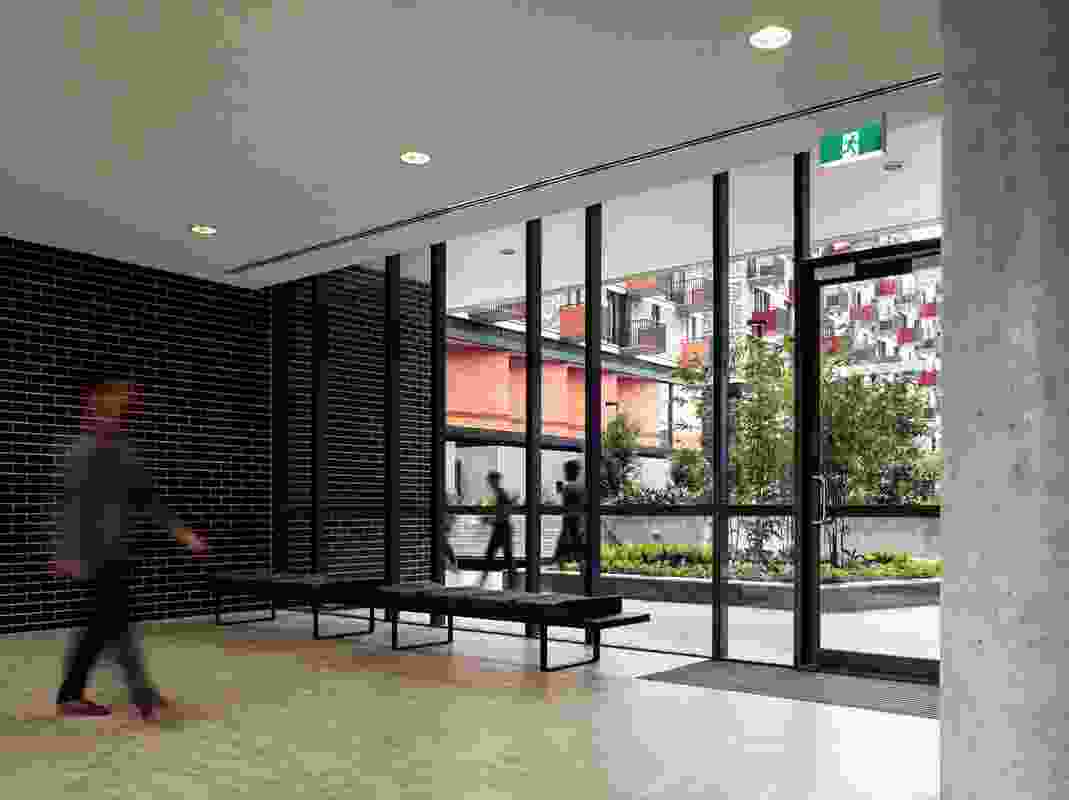 A permeable ground plane allows cross-site links, integrating the colleges into the movement of students around the campus. 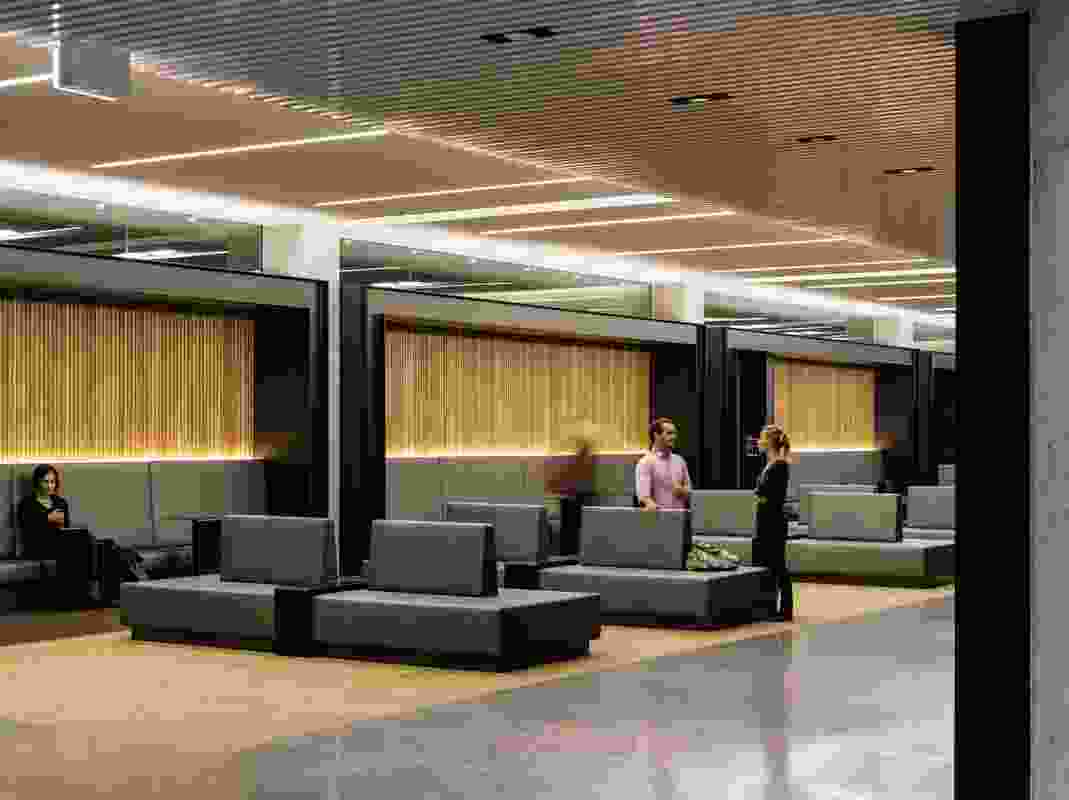 Materials in shared interior spaces are robust, but a selection of natural hues adds warmth. 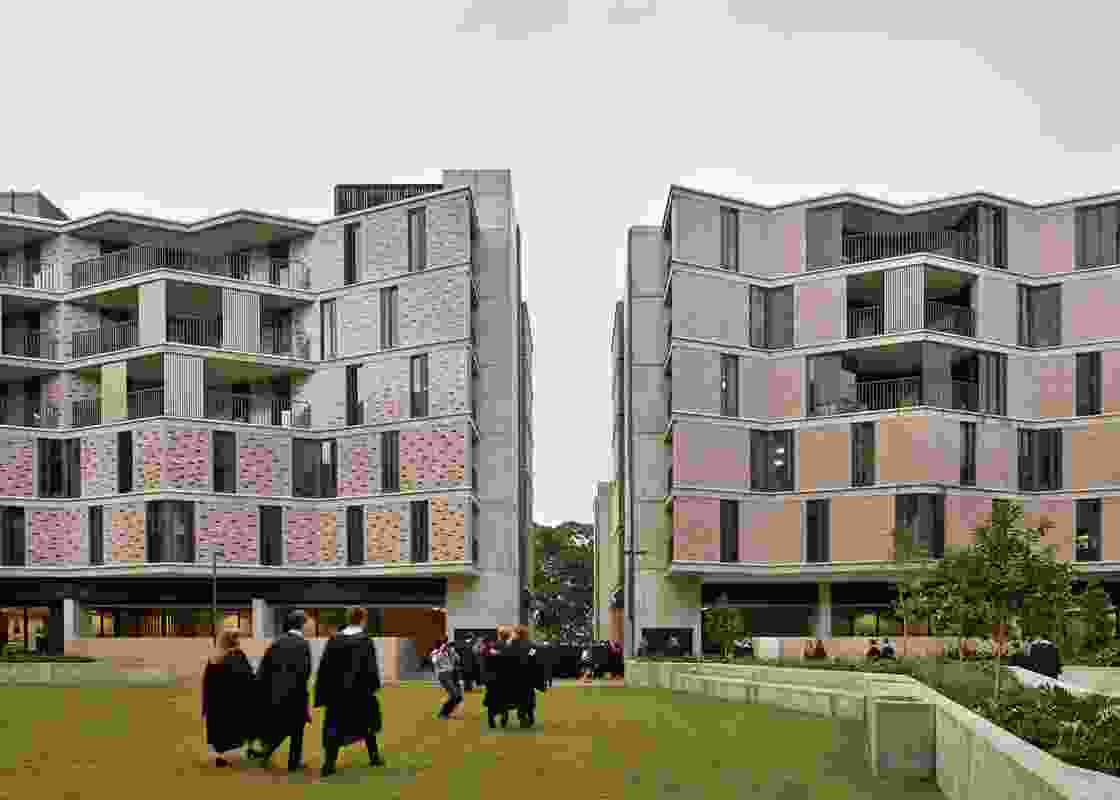 The zigzagging facades help to make a variety of balcony shapes – from small triangles to larger diamonds that are shared by four adjoining rooms. 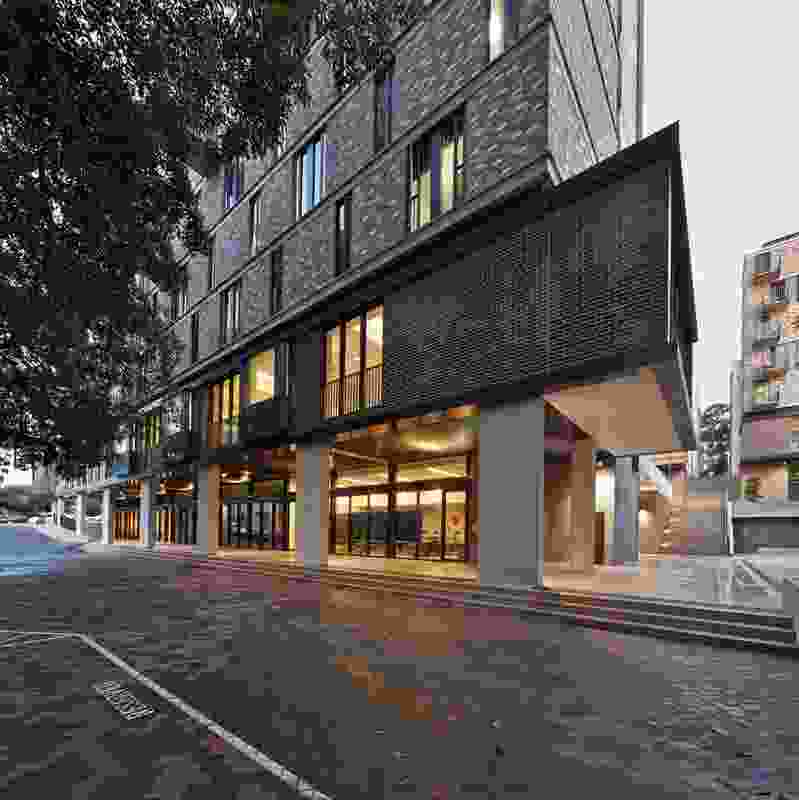