Is Melbourne’s Federation Square project destined to parallel the disappointments of the Sydney Opera House? With a major deletion from the scheme after a change of state government, comparisons are inevitable. Philip Goad reports on a tense situation.

Northerly view from the Federation Square plaza, with St Paul’s framed by the two proposed shards. The western (glazed) shard is at left.

The Victorian Labor government’s decision to abandon the western shard of Federation Square has created a debacle. Although the Lab + Bates Smart scheme for the cultural and commercial complex is well into construction beside the Yarra, the shard has suddenly been erased from the development by Premier Steve Bracks, citing an eight-page report he commissioned from Professor Evan Walker.

The report dated January 2000 used the term ‘brilliance’ to describe the LAB + Bates Smart scheme. However, the report’s three recommendations: 1) that the heritage vista of St Paul’s should be preserved in perpetuity; 2) that the western shard be deleted, and 3) that LAB + Bates Smart be invited to ‘adjust, rework and resolve their design for this area under an amended brief incorporating the changes under recommendations 1 and 2’ effectively negated such praise. Instead, the report reads as a criticism of the 1996 competition brief which had omitted to protect the so-called ‘heritage view’. Walker’s report therefore is an attempt to rewrite the terms of the competition – but three years too late. The report goes on to say that ‘With careful management, it’s not too late to correct that early oversight.’ This statement not only raises questions about the report’s timing but also its logic.

In Walker’s opinion, the offending shard (a three-level building of steel and glass on the corner of Flinders and Swanston Streets) would block a ‘much-loved’ ‘heritage vista’ of St. Paul’s Cathedral. However, his interpretation relies on the specious idea that people must be able to see the cathedral ‘in perpetuity’ while being run down by a tram in the exact centre of the Princes Bridge. This prospect had been denied to Melburnians by earlier developments on the site, most lately the 1960s Gas and Fuel Buildings demolished by Jeff Kennett’s government in 1998.

Lab + Bates Smart had intended their western and eastern shards to frame the St Paul’s facade when seen from the Federation Square plaza and from the south side of the Yarra. Their latest computer-modelled perspectives (produced to try to reverse the government’s decision), also show most of the cathedral facade visible beyond the western shard, from the central bridge viewpoint that Walker specified.

View of the cathedral from the first floor of Federation Square.

Many architects and urbanists are aghast that Walker – as an architect, a former Dean of the Faculty of Architecture, Building and Planning at the University of Melbourne, and a former Labor Planning Minister – accepted the politically tainted chalice of reviewing the project’s design halfway through construction – and that he then recommended deletion of a vital component of the design.

The connotations of political sabotage after a change of government are so obviously comparable to the saga surrounding the abortion of Jørn Utzon’s design for Sydney Opera House – and Walker’s role here challenges the wide respect held for his achievements as a senior member of the Cain Labor government of the 1980s.

Another extraordinary aspect of the affair is that a single individual was allowed to decide the fate of the shard without wide consultation with the urban design community. Walker received written reports from only four entities: the project architects, the National Trust, Heritage Victoria and The Office of Major Projects. He held discussions with representatives of St Paul’s Cathedral and the Federation Square Management Company but it appears that no-one else was consulted.

North-south cross section of the complex.

The government of Steve Bracks appears to have done a Jeff Kennett (on Daryl Jackson’s museum design) – already. But ruining Federation Square for cheap political mileage surely was unnecessary after Labor’s convincing win over the Liberals at the recent state elections.

Walker’s flawed arguments for abandoning the shard would be emphatically answered if the architects were given the opportunity to erect a one-to-one scale prototype on site. Such an obvious public test would attract much popular debate.

It would also sweep aside the National Trust’s idea of a ‘heritage view’ of St Paul’s. Such a view has never existed. Buildings have always been located on the Federation Square site – from a mortuary to a police station, to Princes Bridge Station through most of the 20th century, to the elevated plaza of the Gas and Fuel Buildings since the early 1960s.

Adding to the Trust’s inconsistent position is its deafening silence on the recently constructed Westin Hotel behind St Paul’s, which has now spoiled the silhouette of its spires. The bulk of the western shard would be nothing in comparison to that ballooning volume, which destroys the cathedral’s visual integrity from the north and south. More extraordinary still is the fact that the City of Melbourne gave its approval for the shards to remain, on the morning that the Walker report was released. As a financial partner in the project (to the tune of $64 million), surely this should have counted for something? But no. 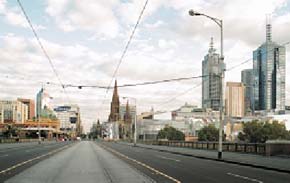 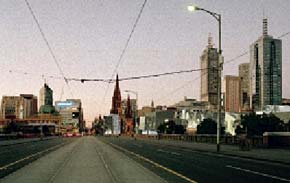 Federation Square is not merely about providing a special photo opportunity for St Paul’s Cathedral. Although it would do that for occupants of its plaza, more importantly, it is primarily about creating a new square that symbolises the coming together of the nation in 1901. What we are now witnessing is the Australian tradition of political meddling in projects of national significance.

The shard also had a function and this too has been forgotten. It was to be Melbourne’s new information centre, a function venue at its upper level and a grand ground floor entrance to the underground Melbourne and Victoria exhibition space. Its western facade was to be a digital information wall.

Walker’s report recommended that, despite the deletion of the western shard, perhaps ‘an opportunity exists for some sculptural element or artwork to be considered in this area, designed not to have the effect of obscuring the vista and perhaps symbolising Australia’s Federation in 1901 in some way.’ This was a direct misreading of the scheme’s original design intent. The shards relate directly to the designing of buildings and open space in a gridded 19th century city that is long advanced in transforming from its European origins into a thoroughly modern metropolis with a hierarchy of skylines and views that are totally different from the nostalgic postage stamp perspectives of the 1950s.

Our 19th century architects celebrated street corners with the GPO, Town Hall and Magistrates Court. Twentieth century architects continued this tradition with the Manchester Unity and T&G Buildings; structures that held their corners and emphasised their streets as major civic spaces. The western shard would have done exactly that – defined and completed the intersection and provided much needed containment and shade for the plaza. No sculpture could ever do that for a plaza which must now expand to a vast scale. This has been an unforgettably cruel cut. The outrage in Melbourne amongst the architectural community has been significant. Assuming ‘the Walker position’ has become a ribald joke. There have been fold-your own shard leaflets, numerous letters to the papers, interviews on talkback radio and television. In the corridors of academe, there is disbelief that such a report could have been penned. Peter Davidson and Donald Bates of LAB have been active throughout, gathering support and being extremely vocal in defence of their design.

But all this, it seems, has been to no avail. The helplessness in the face of such a decision has meant that the shard risks disappearing entirely from view. How to put it back is the main problem. For the Bracks government to overturn the Walker report will require extraordinary grace – a quality for which governments are not known.

Apologies, as we all well know, are hard to come by from politicians, especially when the offending decisions have been populist, expedient and point-scoring. 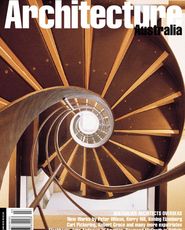