Graham Crist considers work by NHArchitecture at the ground plane of Melbourne’s Freshwater Place, which skilfully negotiates between two conceptions of the city – the city of passers-by and that of resorts.

Two ideas about the city collide at Freshwater Place, on the edge of Melbourne’s CBD. In one, an open public square fronts the Yarra River. This is a junction of many shortcuts, a place populated by passers-by. From here, pedestrians can now cross Sandridge Bridge to Flinders Street Station, and, as they do, read stories about the migrants who have come to Victoria. Just across the river is the Immigration Museum, fleshing out those same stories of those who have come and gone. In the corner of Queensbridge Square, a strange red stage set is ready for an audience. Various buskers already use the place – Bernadette with her piano accordion is often here. This is a city filled with the endless foot traffic of ordinary people.

This ordinariness contrasts with the other city: the city as private resort, best described by a towering billboard for the Skyline Club on Level 40: “Heavens above”.

This is a city of feet dangling in the pool.

Queensbridge Square faces westward to the chic end of Crown Towers – Burberry, Versace, prestige cars idling at the porte-cochère. Behind that red stage set, cars disappear down to the vast underbelly of the casino car park.

Freshwater Place, rather than being a square, is really a pair of relatively suave towers by Bates Smart, with Melbourne City Council’s Queensbridge Square acting as their forecourt. Retail tenancies and terraces front the development, facing the square. Designed by NHArchitecture, this space negotiates between the two.

The second city lands discretely on the ground with two elegantly furnished foyer addresses: 1 Queensbridge Square and 1 Freshwater Place. At the base of these towers, around the foyers and next to the square, is a retail zone called the Urban Retail Village. This zone tries to reconcile the two cities I have described. An arcade which splits the ground level forms a little shopping mall: at the front are cool bars and bistros; further along a newsagent/ drycleaner/shoe repairer, a hairdresser, and around the corner there is even a Post shop (formerly known as a post office). These are interspersed between the foyers with their ceaseless revolving doors, and the Freshwater Place marketing suite. On the other side of the arcade are a gelati shop, a noodle shop, Leroy’s juice bar, Kenny’s bakery and a bagel shop – all the essentials.

The arcade runs from Queensbridge Square and terminates in the gap between the towers. This gap is as much a hole in the ground (an “exit only” ramp from the basement carpark) as an open space. Its roof is like a gigantic carport, with its driveway facing Southbank Boulevard (itself a road that struggles to be a street, let alone a boulevard). It leaves the arcade with nowhere to go. Behind this is the second space – Freshwater Place – adjacent to tower 2. This contains an IGA Express supermarket, a cafe and a corner foyer, with some well-placed seats, trees and lights.

It may well become a “Place” when it faces a future tower; at the moment, it faces a long mural of European-looking forest.

Coming back to the “front”, an architectural line joins the retail zone to Queensbridge Square. NHArchitecture’s bent line of stainless steel, about a metre thick and square, forms a canopy edge.

But, more than this, it is an abstract gesture which lends monumentality to the interface.

Its gestural nature is revealed where we see the thin and prosaic steel supporting it – the stainless line is gigantic by comparison.

Its cantilevers make it almost an abstract expressionist sculpture. The line forms an entry to the arcade and makes sense of the edge of the retail zone – that area between the two cities. And, although it is massive and orthogonal, the line wanders. It doesn’t really conclude anywhere, and nor should it.

The junction between the two cities is particularly sudden here, and their relationship is like an open question.

I hope this arcade will work. I like the thick line and the red stage as architectural gestures, and I imagine the space behind will work with a good building on its western edge. There is a genuine attempt here to link the city of passers-by with the city of private resorts, in a place where we might not expect it. And those two cities seem increasingly difficult to join. 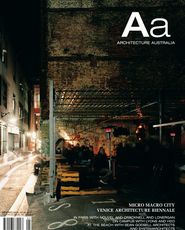