UTAS and Cave Urban join forces to create the Hothouse

In February the School of Architecture and Design at the University of Tasmania (UTAS) Launceston campus partnered with Sydney-based design practice Cave Urban to create the Hothouse, a temporary bamboo pavilion, as part of Tasmania’s Museum of Old and New Art’s (MONA) Dark Mofo annual winter festival in Hobart.

“I saw two problems,” recalls Helen Norrie, lecturer in the School of Architecture and Design, UTAS, when approached with the commission. “They wanted a bamboo structure that would be used for small, intimate conversations and as a space for a huge feast. And the space needed to be warm and dry in the middle of the Tasmanian winter. There seemed to be inherent contradictions in the brief.”

But in the end, through an intensive process of learning and making that is part of the School of Architecture and Design’s Advanced Design Research selective, “the design mediated those things,” Norrie says. She knew her team of ten graduate students was in good hands when partnering with Cave Urban, who, according to Norrie, “has done things for years with bamboo.” A glance at Cave Urban’s website suggests more than a fleeting interest in this highly sustainable resource.

Two UTAS students travelled to Crystal Waters, an eco-community in Queensland, and, under the tutelage of Jed Long, harvested bamboo for the project. Pinto thinks it’s important that young architects experience the “full circle” of the project’s material – from harvesting it in the forest, to loading it on the truck, receiving the goods on site and, later, recycling the bamboo. “They see all the implications and the energy use,” Pinto said. “Transferring it on the truck uses energy; otherwise, it’s a low footprint.”

Rather than the Tasmanian weather or a snowballing project deadline, it was the building material that proved to be the project’s most challenging element. “You just have to do what bamboo wants you to do,” Norrie says.

After students spent three weeks on development and design research, Cave Urban led a three-day intensive workshop with the graduate students. They made 1:20 models and 1:3 models using bamboo to see how connections and components would come together.

The Hothouse project was built on the grounds of Salamanca Place, the site of a well-established public market in Hobart, over a twenty-three-day period. The architecture students worked with more than a dozen students from the Tasmanian College of the Arts. With several architects and construction crew on site, the master to apprentice ratio was approximately one-to-one, allowing each student access to expert knowledge and mentoring.

Rather than the Tasmanian weather or a snowballing project deadline, it was the building material that proved to be the project’s most challenging element.

“You just have to do what bamboo wants you to do,” Norrie says as she explains that the original pavilion plan, consisting of triangular bays constructed from a series of arches, got scrapped when the bamboo didn’t bend as much as they had anticipated. Instead, a series of columns and curved beams proved to be the most suitable structure for the bamboo. “It was very exciting because it brought a different aesthetic. It looked very appealing,” Pinto said about the structural change and resultant design.

The project team designed and created a large conversation pit from timber pallets and split bamboo underneath the central dome. Pinto’s sister, sculptor Carolina Pinto, flew in from Chile to design and construct the fire pit/furnace, starting with an existing potbelly stove that MONA had on hand. She adapted the stove with metal obtained for free from the local metal scrapyard. Large plastic sheets attached to waterproofed aluminium tracks over the pavilion domes provided further protection from the weather.

To meet the brief, the pavilions needed to have spaces for intimate gatherings for a 72-hour session of think-tank-style meetings. The team made spherical bamboo pods that participants used for breakout spaces. Each pod housed a forty-four gallon, beeswax-lined drum containing a heater, which emitted the faint smell of beeswax when in use. The hanging lights were made by Hammer Lighting and designed in collaboration with Cave Urban.

Over 1-3 June, advertising agency Clemenger Tasmania/OMD facilitated the Hothouse think-tank sessions that were hosted in partnership with Dark Mofo, UTAS, Cave Urban and the City of Hobart. Three groups of sixteen participants met to brainstorm on the topic of education, with the results of the sessions shared in an exhibition on June 13-15 and on thehothouse.net.au.

On 17 June, with just minor shifting of the spherical breakout pods, the space was ready to accommodate more than 30,000 people over the course of five nights for the Dark Mofo Winter Feast.

Directly after the festival, what took 23 days to construct was broken down in just three days, with an emphasis on recycling the majority of the pavilion’s components, including bamboo, wire tires and rope. The students, with the help of a rigger and engineer, were also able to conduct experiments on the bamboo to test its resilience.

Both Norrie and Juan Pablo Pinto were pleased with the Hothouse process and results; they especially liked that the project gave students the often-elusive experience of making and implementing design decisions on the spot.

UTAS and Cave Urban join forces to create the Hothouse 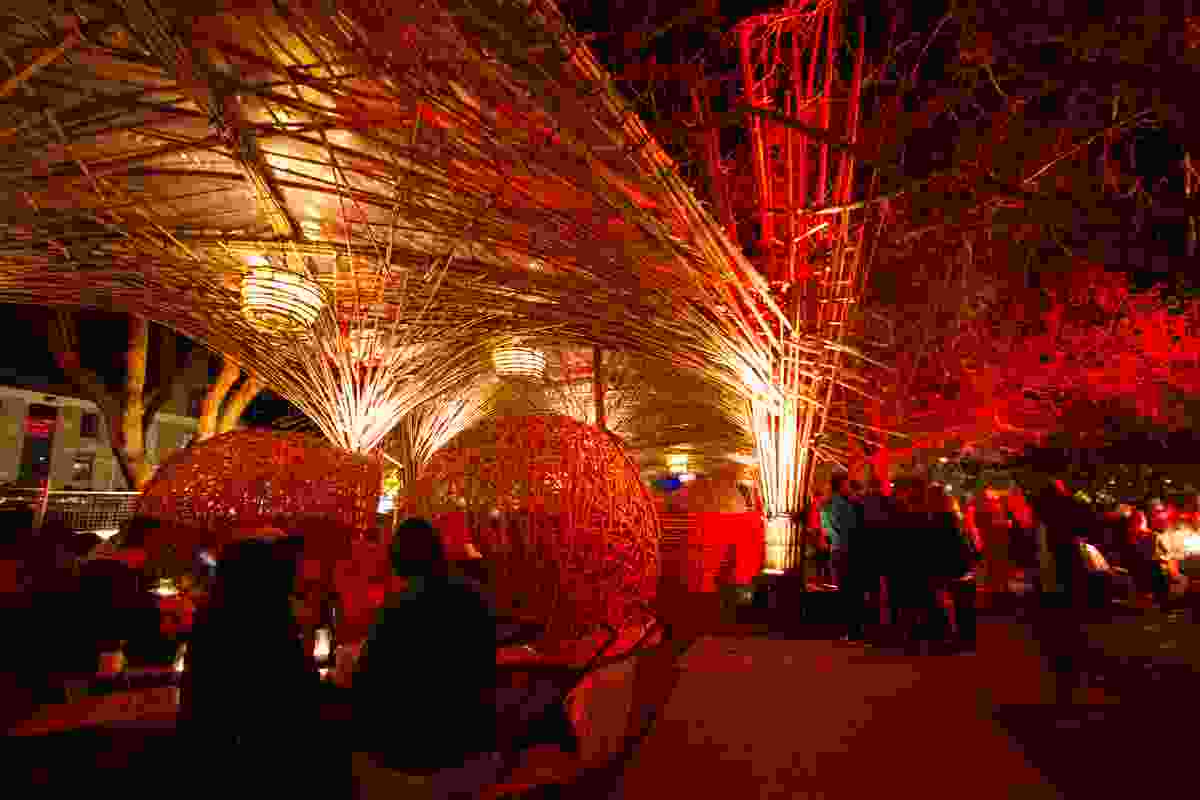 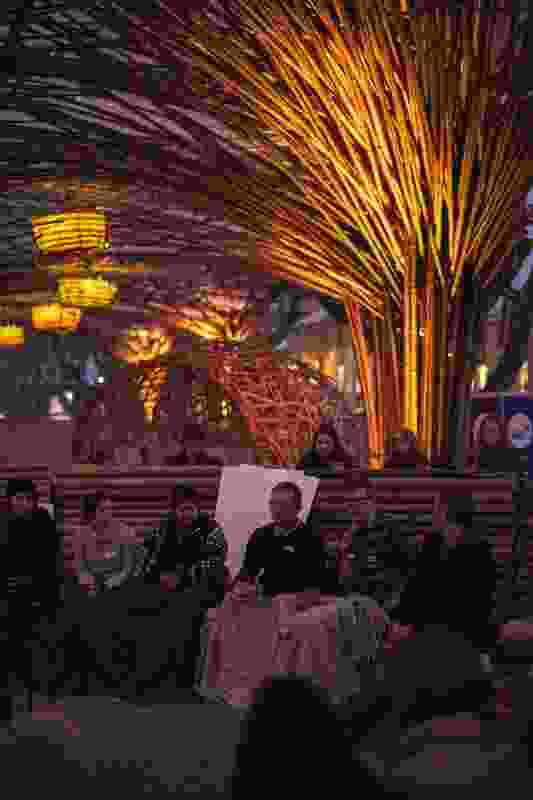 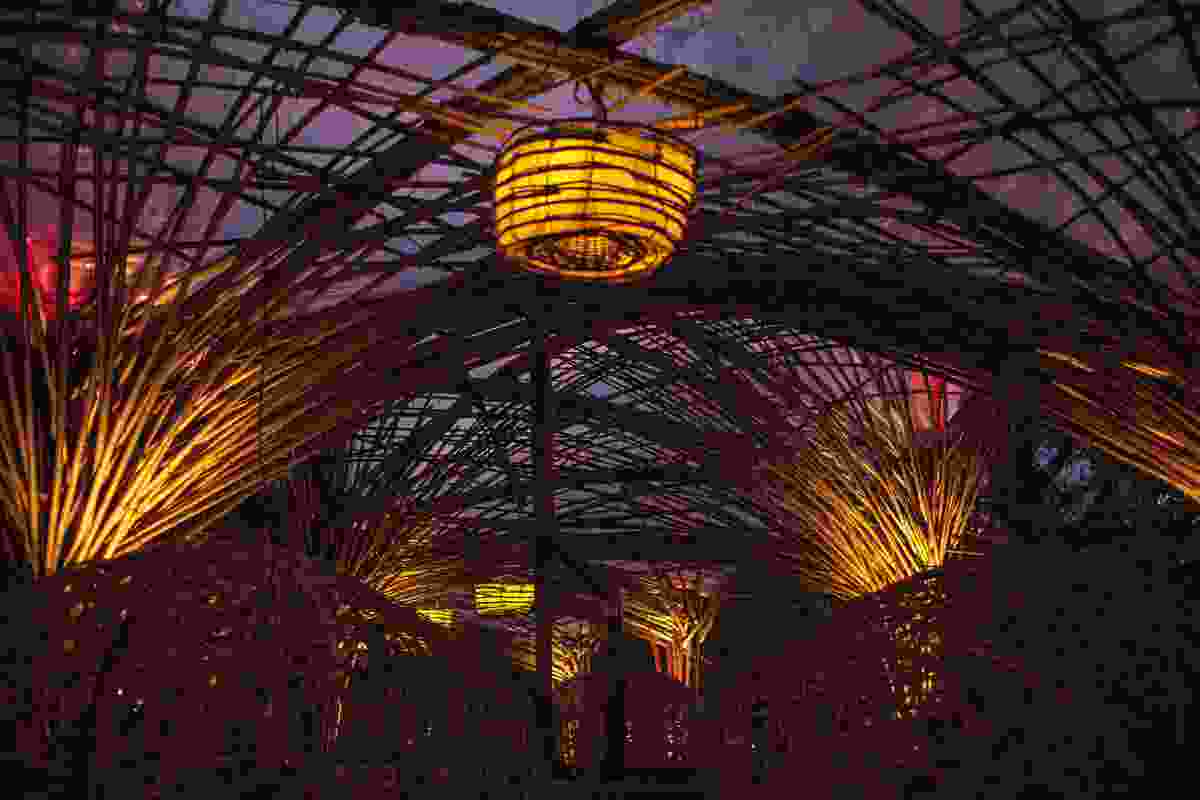 The Hothouse hanging lights were made by Hammer Lighting and designed in collaboration with Cave Urban. 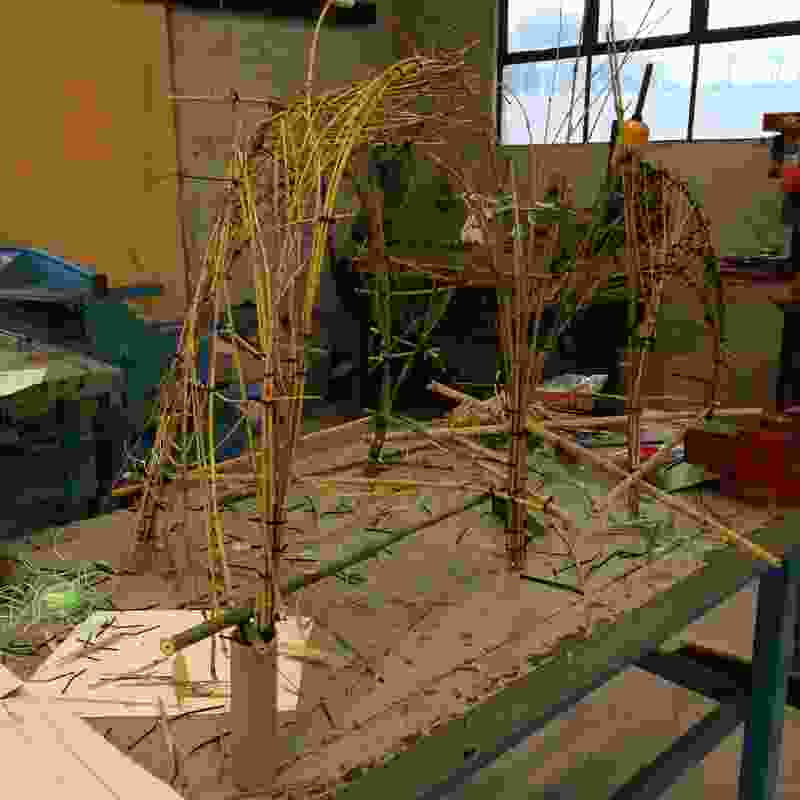 Prototype for the Hothouse project. 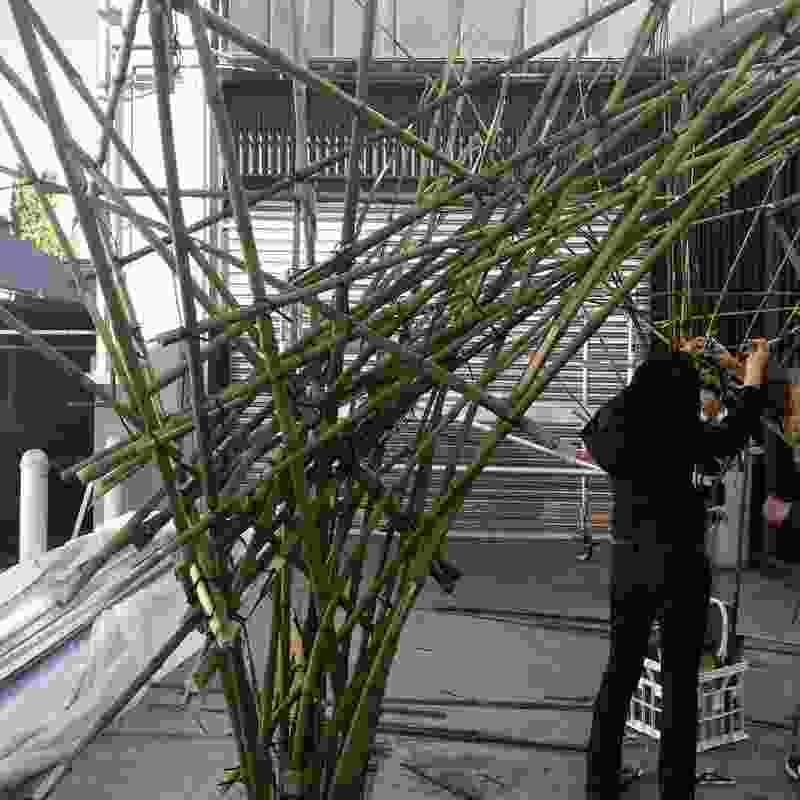 Student building a prototype for the Hothouse project. 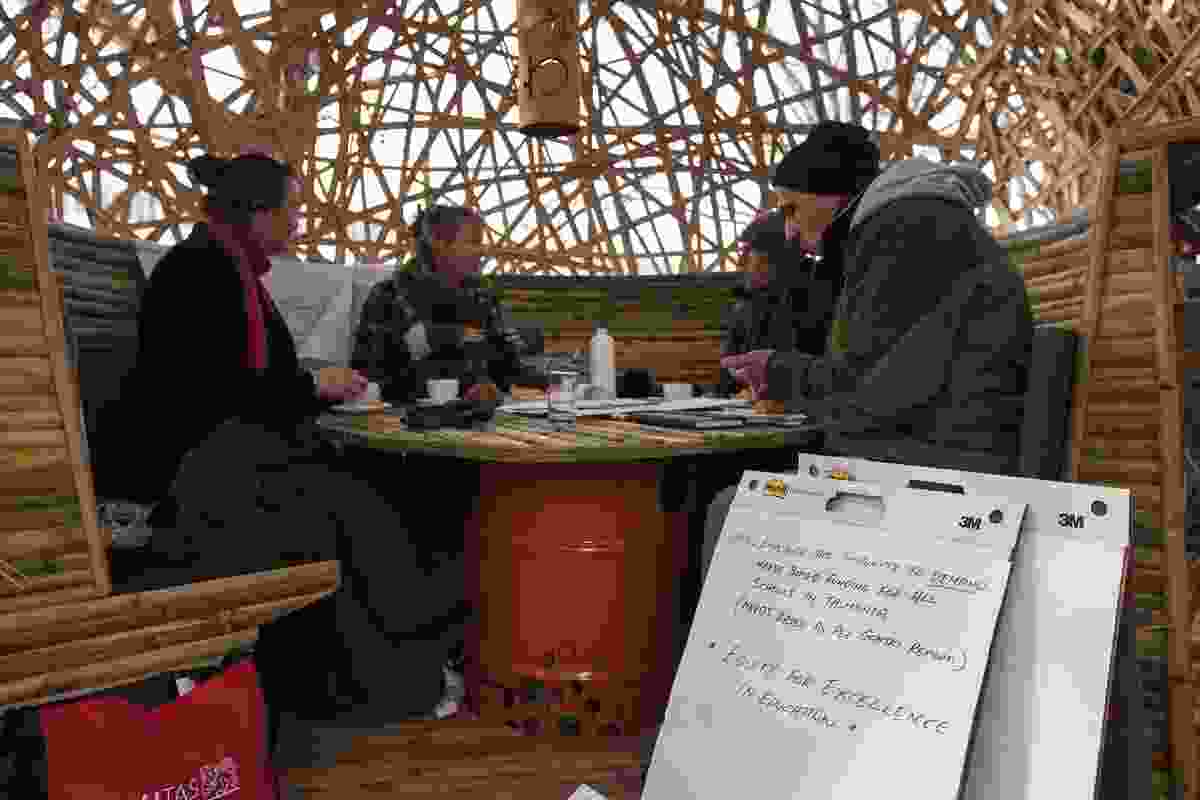 Advertising agency Clemenger Tasmania/OMD facilitated the Hothouse think-tank sessions that were hosted in partnership with Dark Mofo, UTAS, Cave Urban and the City of Hobart. 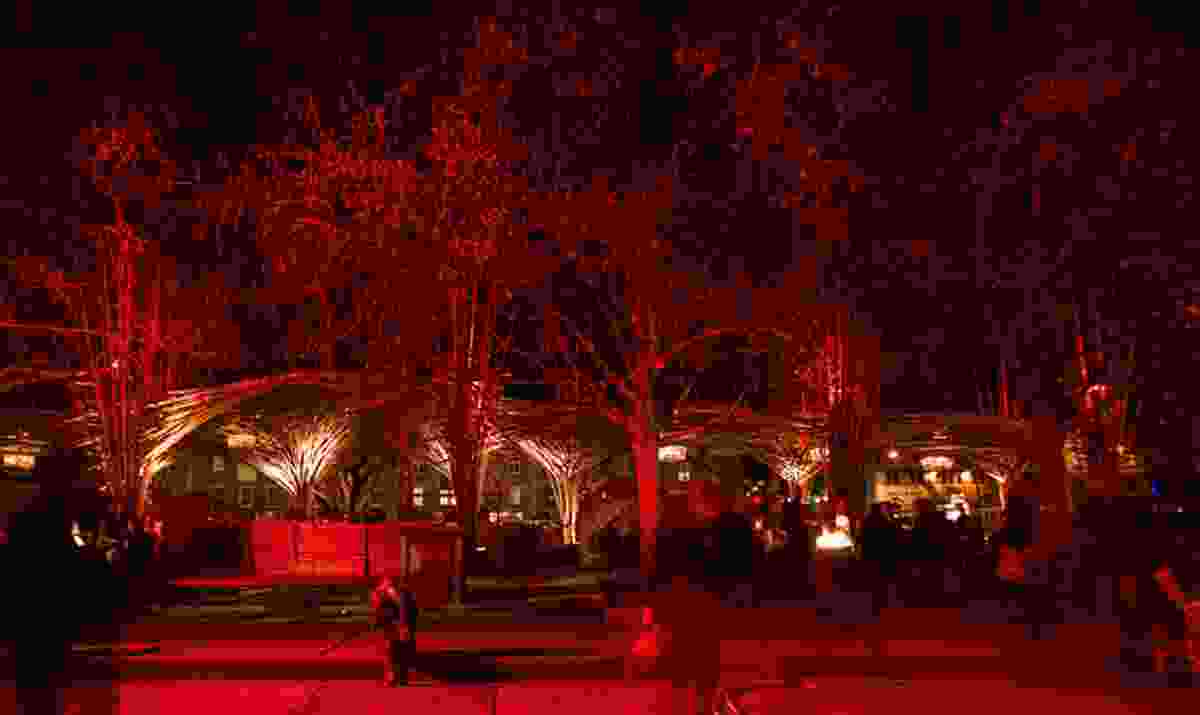