Annabelle Pegrum gives an overview of the short-listed proposals for the Australian exhibition at the 2012 Venice Architecture Biennale.

SuperSeed presented a recipe for a new way of living.

The Australian Institute of Architects decided in 2005 that it would support Australia’s representation at the Venice Architecture Biennale with vigour, money and good management. This leap of confidence has taken Australian architecture onto the biggest international stage of its type.

Three successful biennales and some 178,000 visitors later, Australia’s exhibitions have reached out to the world and are in hot demand as travelling shows here and overseas. Former biennale directors have done the nation proud and each has raised the creative bar for the next show.

The Venice Biennale Committee received twenty-seven submissions for the role of creative director for the 2012 event. For the committee it was like dipping into a wonderful bikkie jar of homemade architectural considerations, causes for celebration and just plain and interesting rumination and musing. Five proposals were short-listed – it was quite a challenge to whittle it down to that number given the gamut of topics and quality and depth of talent evident.

The short-listed teams were invited to scope out their proposals and to make a presentation to the committee. As expected, creative buzz was the order of the day. The competition was stiff, with thoughtful exposés of thematic intent, curatorial content, ambitious exhibition and event strategies and, from some, fun mock-ups of exhibition accessories.

Jan van Schaik, Cameron Bruhn and Andy Sargent presented SuperSeed as a bold exploration of “new ways of living with food and energy.” Demonstrating leadership in urban farming, the exhibition would reveal the socio-cultural connections between food, architecture, everyday life and the challenges of production. The pavilion exterior would become “an excursion in a new architectural language written in solar ivy,” with the interior transformed into a sensory urban garden with renewable produce for the visitor – a place of wonder and experimentation. A large trout aquarium would provide nutrients for the plants, with much of the exhibition power self-generating. Produce would be brought from a farm on the outskirts of Venice, where it would be grown using “aquaponic technology.” Visitors would be immersed “in the interior topiary of a productive terrarium,” enjoy celebrity-chef culinary treats and venture into the intricate relationships of food, humanity and the built environment.

Robert Grace and two of his team members, Denise Neri and Esther Charlesworth, presented Rising Inflection – from here to there to here to here to there, on the eternal theme of national identity. In this instance the curatorial vehicle would be a survey of our finest expatriate architects. Venice would be a “fitting locus” for these practitioners, whose “Australian-ness manifests implicitly and explicitly through their architecture … allowing the voice of the new world to continue to enrich the old world.” Clever wayfinding interventions harking back to a sense of the foreign juxtaposed with the familiar “black stump” would begin the discovery journey to the pavilion. Inside, the visitor would glimpse the spirit of Australian architects working overseas, with exhibits illustrating the way in which they exchange, embrace and engage with other cultures. A competition for young architects, to be placed in the international offices of those exhibited, would be a post-Venice benefit as would the legacy record of dialogue reflecting on the theme with participants from the other pavilions.

Andrew Maynard and Amelia McPhee presented The Voyage / Voyeur, a concept described as emerging “from an idea to map Australian thinking on architecture” and to show “the intimacies of small decisions, the incongruous accumulation of things, the lulls and the momentums.” Thinking big, the exhibition content would be collected and catalogued from a national call for all Australian architects to contribute personal items, objects, works, sketches or musings that were of meaning to them – what the team called “mental snapshots.” This engaging and compelling display would be augmented with visual/audio footage of selected workplaces to demonstrate something of the “exotic and unknown” Australian office culture. Magical design elements proposed range from large-scale book-clouds and bookend machines to small object and image containers with places for interaction and personal creative pursuit. The pavilion would become a sort of open-diary collage of Australian architecture, a production house that would physically extend and wrap around the entry and external spaces.

The Office for Opportunistic Architecture by Kate Rhodes, Rory Hyde and Justine Clark was presented as an “ooh ahh” proposal to wow the visitor. Respecting the integrity of the soon-to-be-replaced pavilion, the built form and spaces would be enriched as a temporary and unique “office as exhibition” laboratory. Changing teams of Australian architects from diverse backgrounds would collaborate in addressing a swag of tough social challenges, the “opportunities” sourced by the curators. Visitors could watch or participate in the detail of process and investigate the product as it is layered onto the pavilion itself and the exhibition components, the walls becoming “opportunity banks” to inform the future. The team describes the OOA as reflecting “an architecture that (is) entrepreneurial, participatory and politicized … there is a delicious double edge in ‘opportunistic’ – it is both optimistic and slightly scurrilous.” This provocative proposal would demonstrate to the world and those back home an alternative, temporary and strategic method of practice.

Each of these proposals is intelligent and alive with promise and each has elements of brilliance. Each submission feted Australian architecture, dealt with themes pertinent to the pursuit of knowledge in our field and included outreach through discourse and virtual engagement. Some would be more high risk in delivery, while others demand complex operational logistics for success.

A recurring theme in the proposals relates to the very nature of Australian practice, what drives and defines it and what could make it of greater value to Australia and the world. The proposal selected by the committee for the 2012 Biennale, Formations: New Practices in Australian Architecture, concentrates on this very theme and has a keen eye on the future.

The creative directors of Formations are Anthony Burke and Gerard Reinmuth, who have worked in close collaboration with TOKO Concept Design. Their proposal pursues the concept and role of the architect and the capability of the discipline to influence the contemporary built environment. It examines associations with other creative fields and stakeholders and the chameleon potential of architects, not just as the makers of buildings but also as policy makers, educators, critics, advocates and strategists. The creative team has nominated key questions; typically, “how are creative architects restructuring their ideas of what it is to practise through designing new forms of practice itself?” Such questions underpin and inform the concept and selection of “formations” – the practitioners and educators central to the exhibition. The pavilion will be organized within an immersive physical matrix of dots, slots and holes with identifiable “light points” drawing the visitor to prescribed points of engagement, be it object, people or discourse. Described as “a system which provides a context for disparate pieces while visually and spatially tying the show together,” it will establish a strong visual identity and make for a stimulating visitor experience. Comprehensive event infrastructure includes “verandah amphitheatres” outside the pavilion, the use of smartphones, pop-up debates and conversation formations throughout Venice. Playfully identifiable in the evenings, these events will extend the “light point” motif, with people wearing smart-light clip badges appearing to dance through the city.

The committee thanks all those who submitted and especially the short-listed teams for their commitment and enthusiasm. Congratulations to Anthony Burke, Gerard Reinmuth and Toko. Formations promises to be an outstanding exhibition. 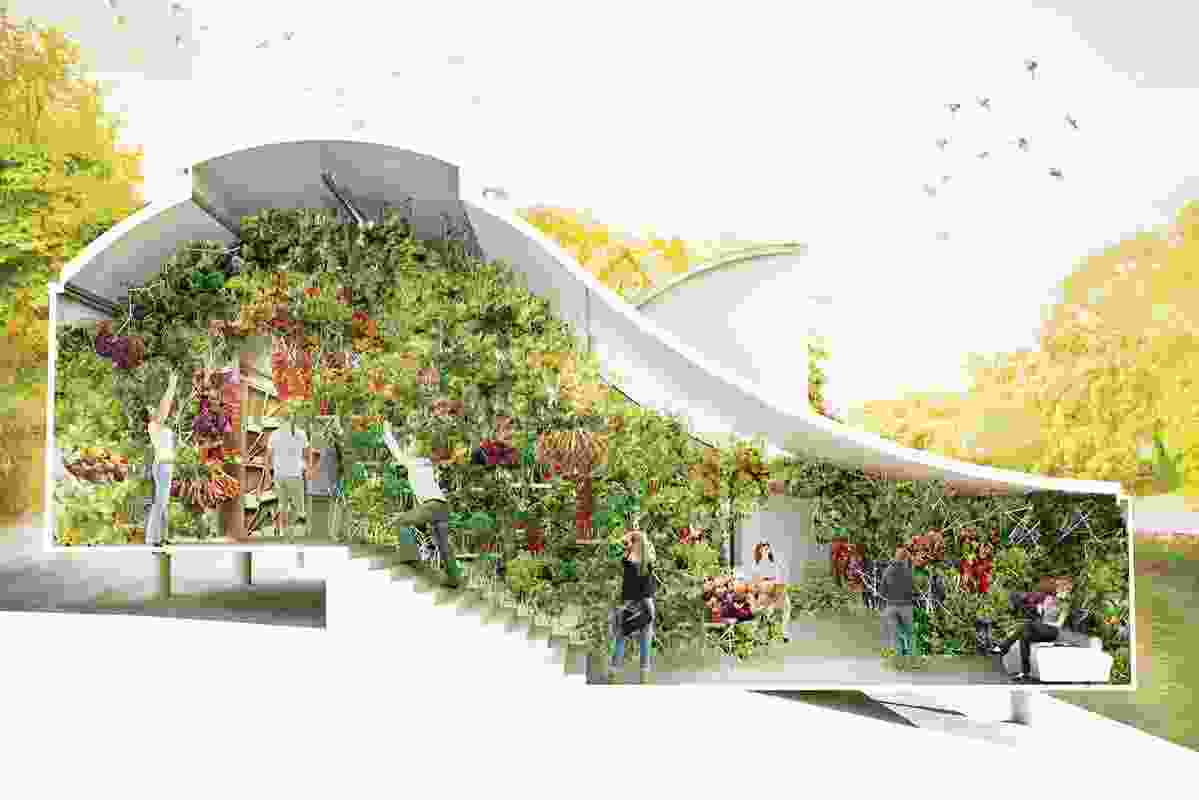 SuperSeed presented a recipe for a new way of living. 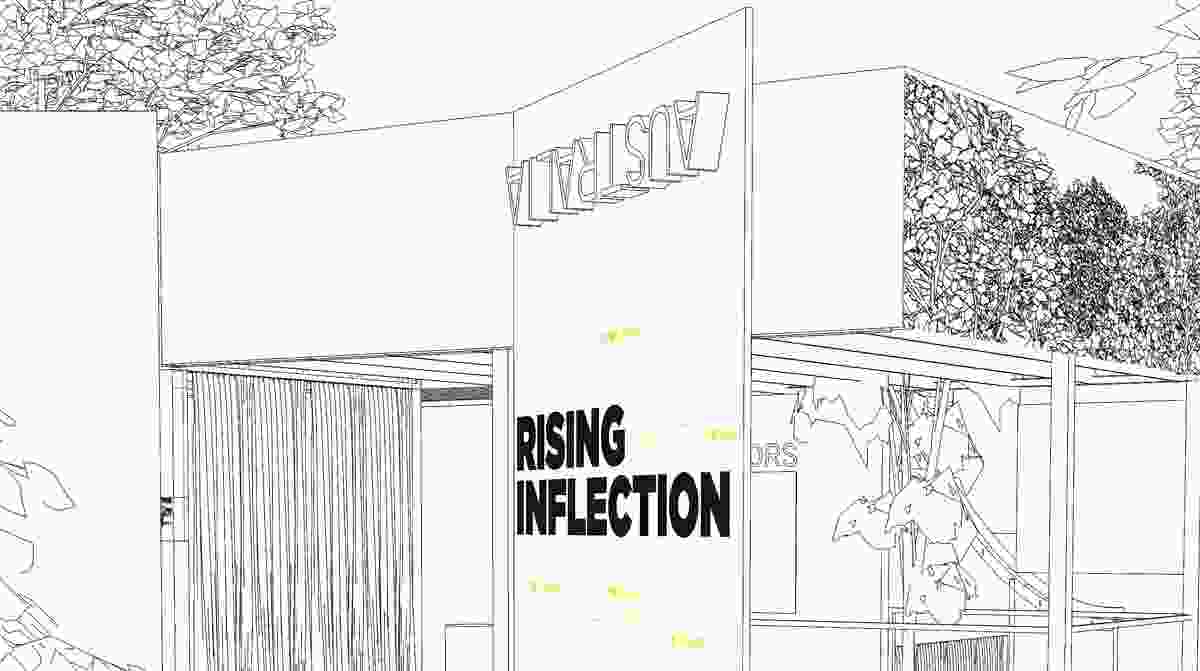 Rising Inflection proposed a survey of the Australian diaspora.

Rising Inflection proposed a survey of the Australian diaspora. 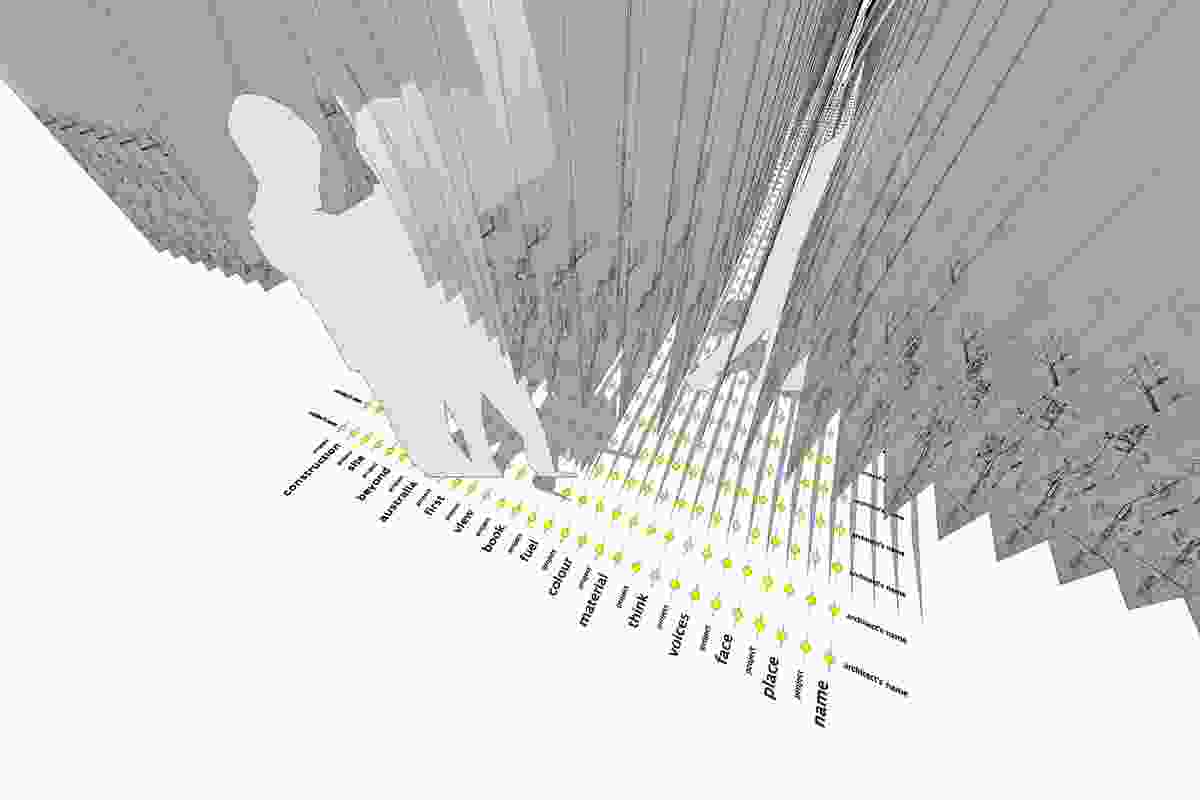 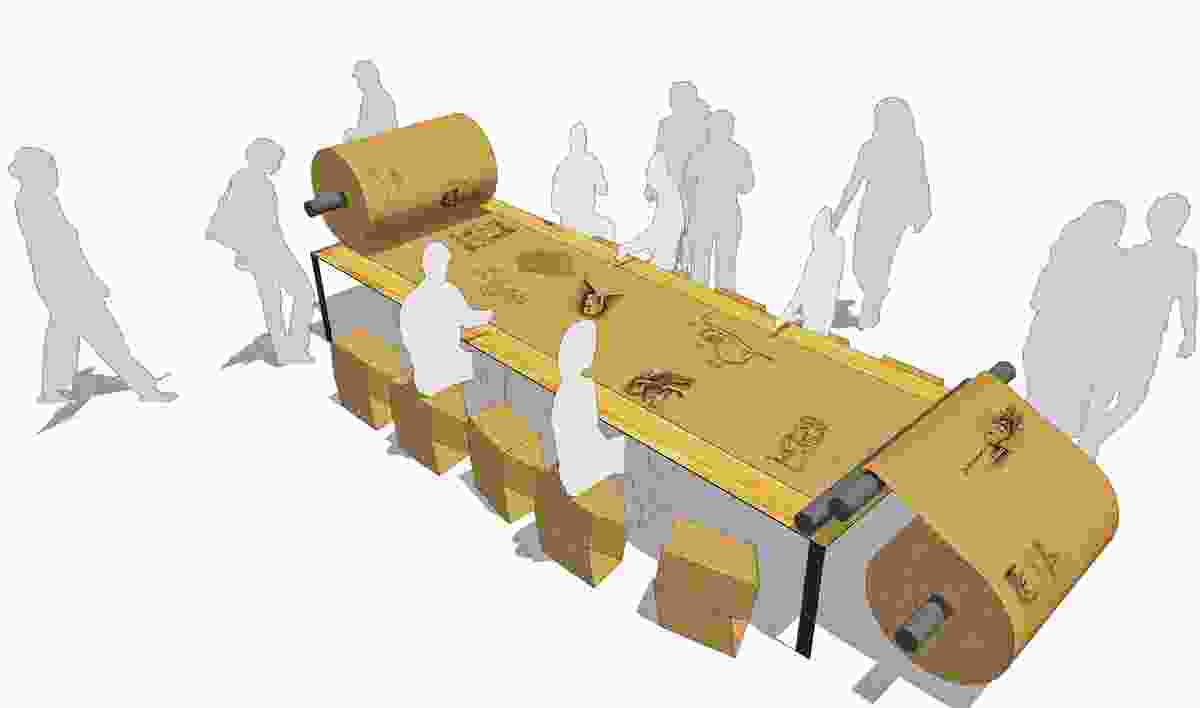 The Voyage/Voyeur outlined an open-diary collage of Australian architectural cultures. 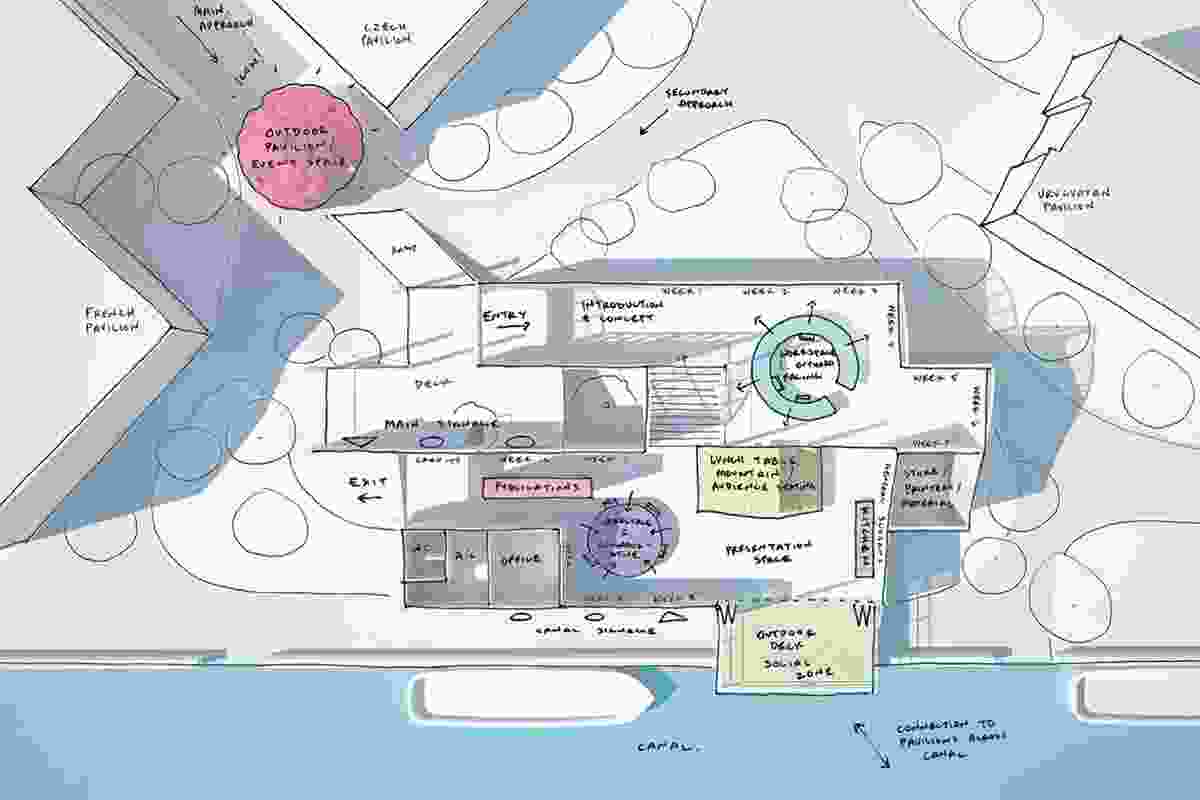 The Office for Opportunistic Architecture set out to turn the pavilion into an experimental laboratory for practice. 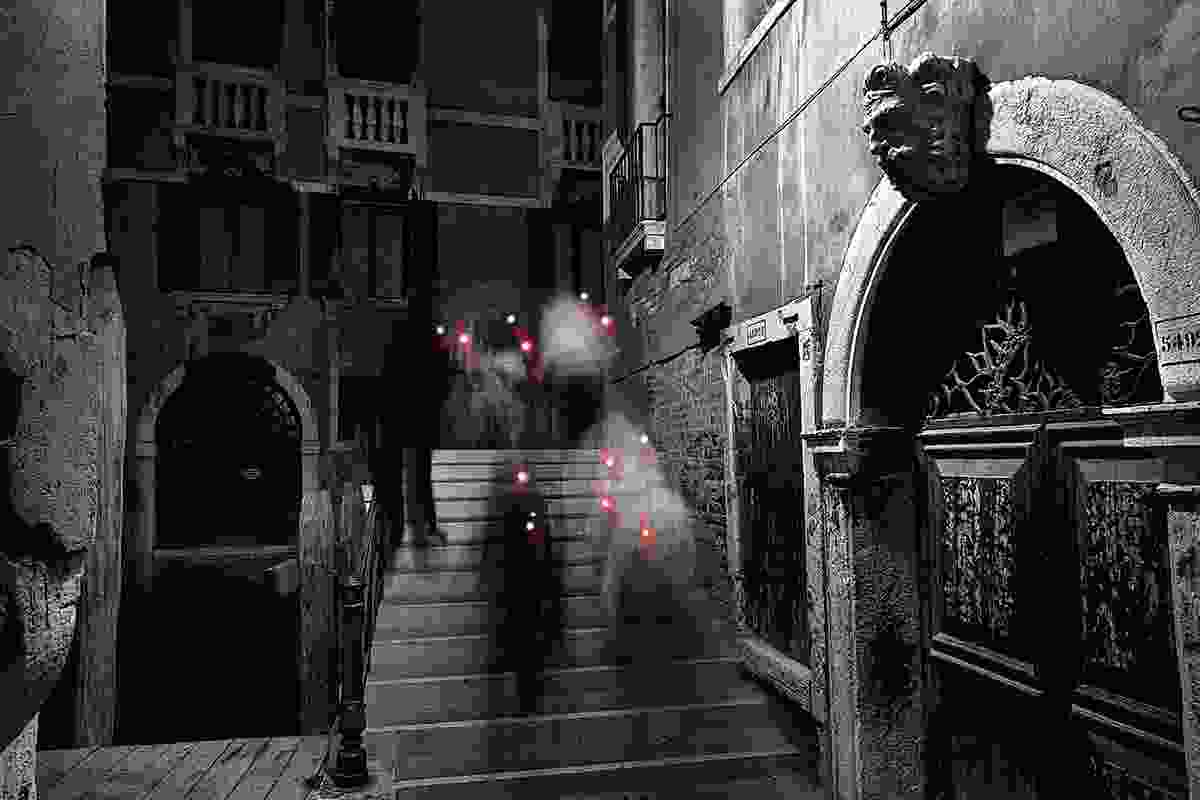 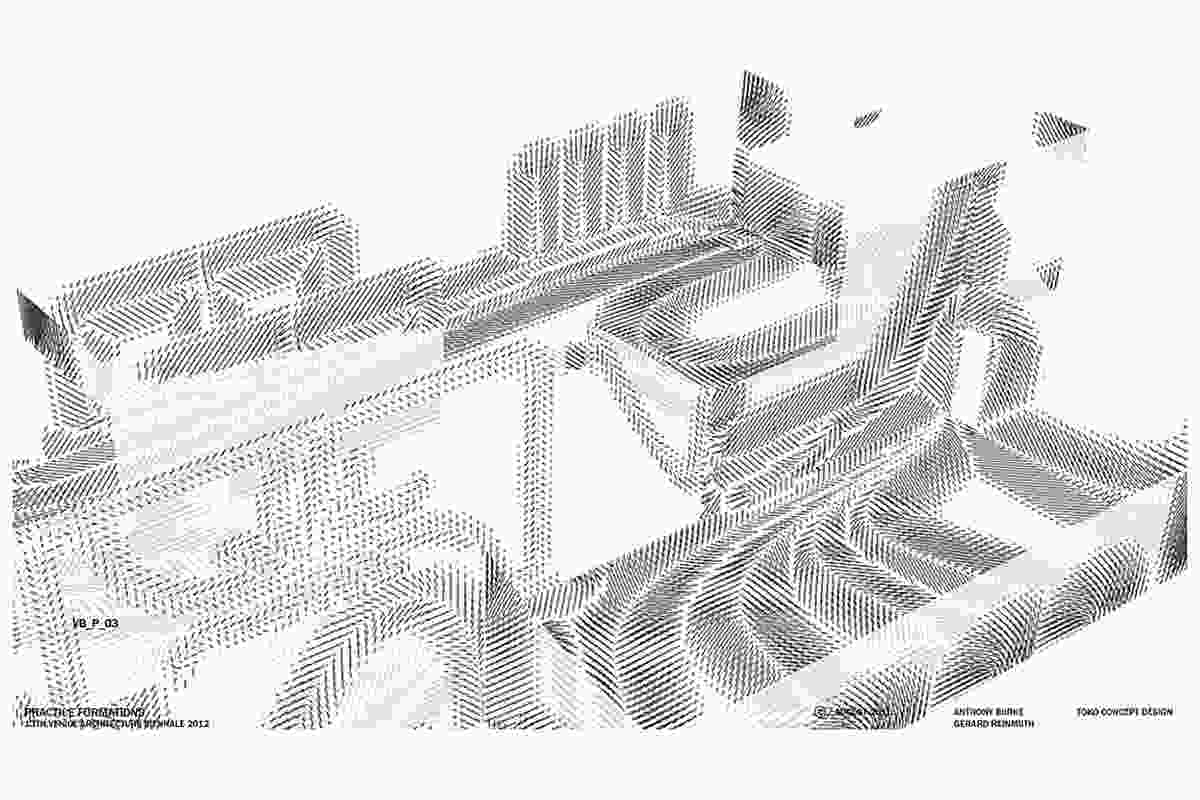 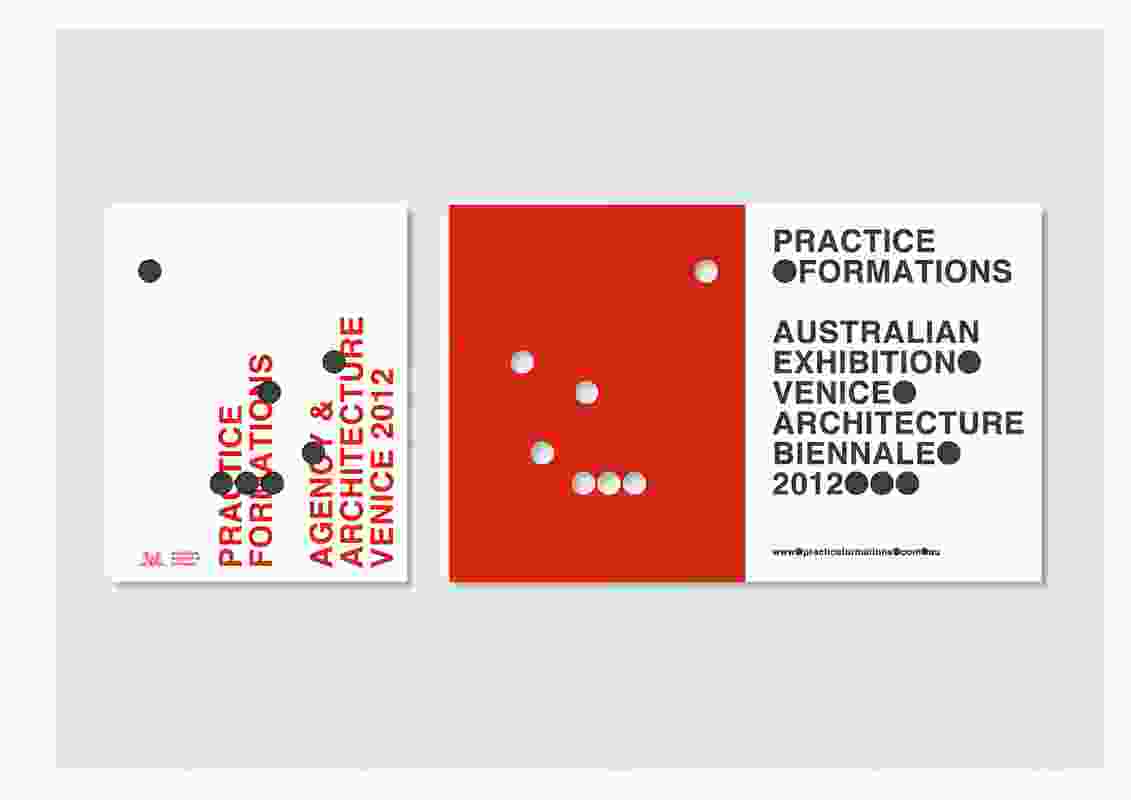