Seven shortlisted teams vying for the role of creative director of Australia’s pavilion at the 2014 Venice Architecture Biennale unveil their visions.

Final submissions were presented this week to the Australian Institute of Architects’ Venice Biennale Commission, from the seven teams vying for the coveted role of creative director of of Australia’s pavilion at the 2014 Venice Architecture Biennale.

From a flatpack pavilion to a floating stage on the canal, the shortlisted visions address ideas of impermanence, history and culture, in what will be a unique Biennale for Australia, in the midst of transition from the old Philip Cox pavilion to the new design by Denton Corker Marshall.

With no physical building to house the exhibition, the Australian teams have developed a range of temporary platforms for their interactive expositions. The seven teams responded to Biennale curator Rem Koolhaas’s theme of Fundamentals, focusing on the history of architecture over the past 100 years, and the sacrifice of national identity in the face of modernity. Each has constructed strong Australian presences for the national pavilion, drawing on our architectural history and culture. Below is a snapshot of each team’s vision, with more images in the gallery above.

Under Construction explores the history, present and future of eight major Australian cities, delving into the radical differences and subtle variations that define our architectural subcultures. This focus on cities avoids a reductive, singular representation of Australian architecture, providing instead an expansive, inclusive and nationwide overview.

Occurring at the historic junction between pavilions, the 2014 exhibition becomes both a swan song for the Cox pavilion, itself a potent modern icon, and an overture to the new Denton Corker Marshall pavilion, which will take form over the course of the Biennale. Our National Pavilion, like Australia’s architectural identity itself, remains ‘under construction.’

The ‘leftover’ site dictated by this construction activity suggests three aspects: a linear aspect (the hoarding), a point aspect (the clearing by the canal) and a planar aspect (the surface of the canal itself). Under Construction, in response to Koolhaas’ overarching ‘Fundamentals’ theme, abstracts these site aspects as the fundamental elements of composition – the LINE, the DOT and the PLANE. These elements in turn provide a chronological basis for examining Australian Modernity. Embedded in the earth, the LINE represents past (a timeline). Rising from the ground, the DOT describes the present (a viewing point). Transitory and mobile, the PLANE symbolises the future.

The LINE, the DOT and the PLANE therefore represent Australian modernism as it was, as it is, and as it might be.

Augmented Australia 1914–2014 embraces the freedom that the pavilion-less site lends to 2014. Providing a mooring for the work, the team has conceived an open array, a field of possibilities and a way of intriguing and directing people to the site from its two armatures. The work is also rich with the possibility of opening a cupboard of history, and in this way make the hidden great works real.

The site, with a high gloss, black kiosk and technology hub, provides the ‘origin’ point, a marker in time from which to see the previous 100 years of Australian architecture, and to describe and exhibit these public buildings simultaneously.

The exhibit will stretch out across both arms of the landscape – one along the canal, the other along the main entry path adjacent to the hoarding – and will look at the unrealized architectures of Australian modernism; a reflection on a series of memories.

Viewers will be able to locate and revisit these unrealized buildings at a scale of 1:1. By moving between the marker poles displayed and using hand-held devices, viewers will have the exhibition content augmented in front of them through the various trigger images mounted on the poles. The content will consist of three-dimensional information – images, voice-overs and animation.

“Each building has to be beautiful, cheap and fast, but it lasts forever. That is already an incredible battery of seemingly contradictory demands … but I operate in very contradictory times,” Rem Koolhaas, 2014 Venice Architecture Biennale curator.

The Flatpack Pavilion will take the good looks and muscular spirit that defined modernist architecture but downsize these attributes for a more precarious age of ecological uncertainty. Prefabricated offsite, shipped in and assembled on site, the Flatpack Pavilion will not be a temporary structure, but a prototype for a nomadic venue that can be assembled, disassembled and reassembled as the need arises.

It will synthesize the optimism of the early modernists with the realism of ecological urgency by treading lightly, and momentarily, on any given location, while maintaining porous relationships with changing climates.

For the Flatpak team, Fundamentals invites a return to the spirit of optimism that inspired an earlier generation of architects to dream of ways of building a better world adn challenges the current generation to test today’s dreams against the rigors of social and ecological necessity.

Modernism was a broad movement, but some of the salient elements that are important to reflect upon are: its spirit of DIY; its enthusiasm for technological innovation; and its egalitarian ethos. The team will produce a film that revisits formalist modernist experimentation to engage with the legacies of the modernist movement in Australia and globally.

Internationally, Australian architecture is considered, perhaps romantically, as a collection of dwellings set in rural locations, opening to the landscape. Openings will both validate and challenge this identity by showcasing well-known residential projects, such as the Bingie Bingie and Robin Boyd Houses, as well as public, commercial and lesser-known projects, in urban and rural locations.

The apparently narrow focus on ‘openings’ becomes a precise lens through which to reveal the breadth of Australian architecture. A series of three films will be captured for each building: a view from inside the opening looking out, showing the diverse landscapes of Australia, urban to natural; a view from the outside looking in, showing the interior and the many ways we live and work, and a detail view, illustrating the materiality and mechanism. Shown simultaneously, the three films illustrate context, inhabitation and the interface between the two.

This year – paradoxically – the Institute is without its pavilion at the Venice Biennale of Architecture. In keeping with the idea that the fundamental of architecture is to provide for the basic human need of shelter, it is our proposition to embrace this ‘homeless’ transition and relate the curatorial rationale to Australia’s residential architecture.

The house and by extension ‘The Australian Dream’ is deeply entrenched in the Australian psyche: the popular obsession with house design is evidenced in both the plethora of television shows and magazines devoted to the topic. Our premise is to select 100 houses for 100 years. These will comprise the catalogue and 10 of these (representing a decade each) will be featured in short documentary films.

Unique to Australia’s involvement in 2014 is that, as the Phillip Cox pavilion that housed the previous four exhibitions is being superseded by Denton Corker Marshall’s replacement, the exhibition will be venueless. The team has embraced this constraint as an enabling aspect of Between.

Between stems partially from the absence of actual built architecture to house the exhibit in 2014 and proposes a virtual, augmented reality experience in addition to a physical presence. Between architecturally conceptualizes presence as being characterized by aspects that are consciously aural, virtual and real. The exhibition will comprise an aural inhabitation of the proposed site coupled with a kiosk-based armature, that is, in effect, an augmented reality portal into a virtual exhibition, housed within a virtual architecture.

While Koolhaas’ theme, Fundamentals, suggests that architecture, in terms of national identity, has become global and interchangeable, the team contends that there exists an Australian ‘character’ or ‘disposition’ to the built environment in Australia, and the team will invite submissions from practitioners, academics and pre-career architects of Australia to help trace the fundamentals of what Australian architecture might be.

The installation will explore ideas of experiencing architectural spaces and ideas within/without a constructed environment. This will primarily be a virtual, visual and audio world experienced through portable devices with a kiosk housing a virtual exhibition and a soundscape conceived as a number of layers that inhabit conceptually adjacent spaces.

Rem Koolhaas asks, “why has the past century of encounters between cultures, technological inventions and imperceptible ways of remaining ‘national’, made our cities and buildings look the same the world over?” This arouses issues around architecture and national identity where architecture either affects or reflects the national ethos.

In Australia, this is illustrated by the recurring question ‘What is Australian architecture?’ and its accompanying lack of a widespread, coherent and definitive answer. At the same time our nuanced and thoughtful local architectures are achieving worldwide recognition, and our cities consistently outrank global urban paragons. We have absorbed, engineered and we export the global modern. Is it time for a new approach? Is that what the new Australian pavilion is doing?

Right in the middle of building this sleek, black box, a hoarding erected around the construction site conceals Australia’s future pavilion. The crowds at Venice will be curious to peek through the hoarding and see what Australia is constructing there, so the team wants to exploit this curiosity by using the hoarding as an engaging encounter point, making the hoarding a space, rather than a barrier – one that re-visions, rather than just retrospects. A layered reality, a space between the symbolic and the real. 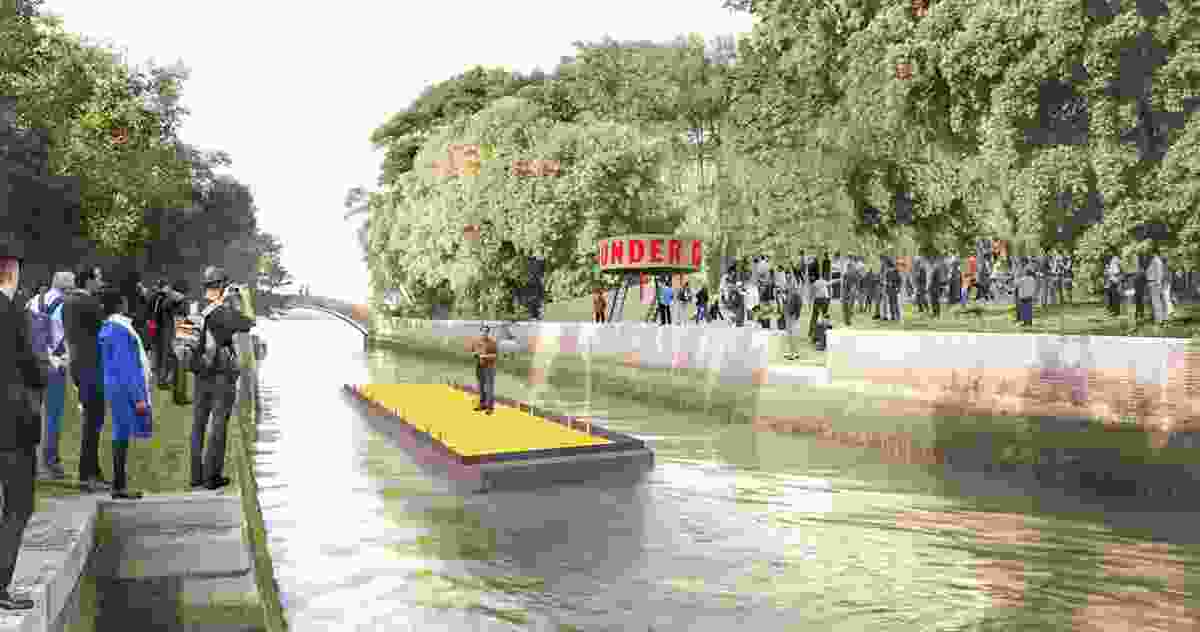 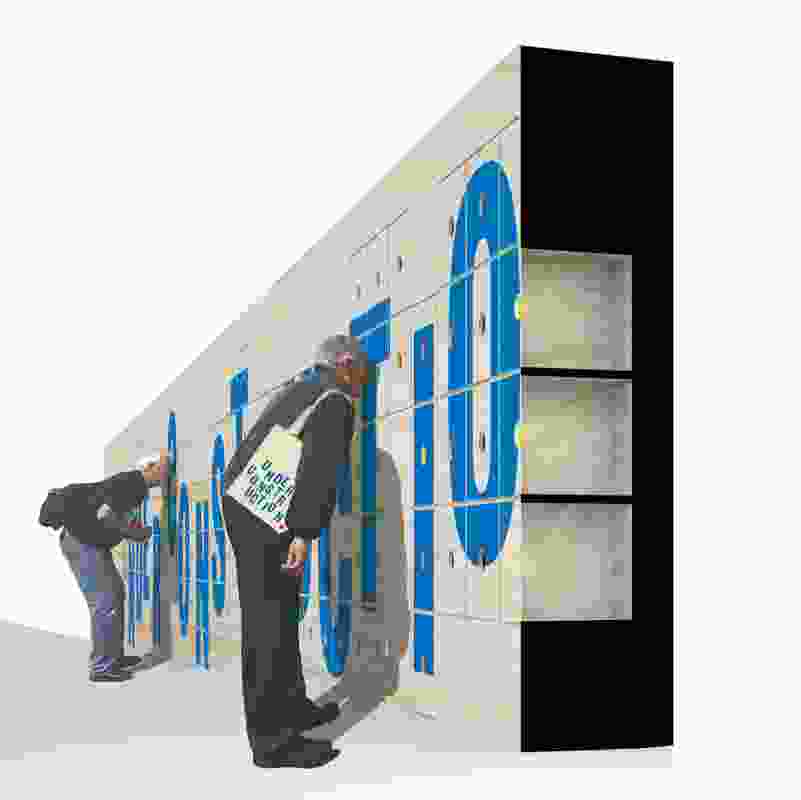 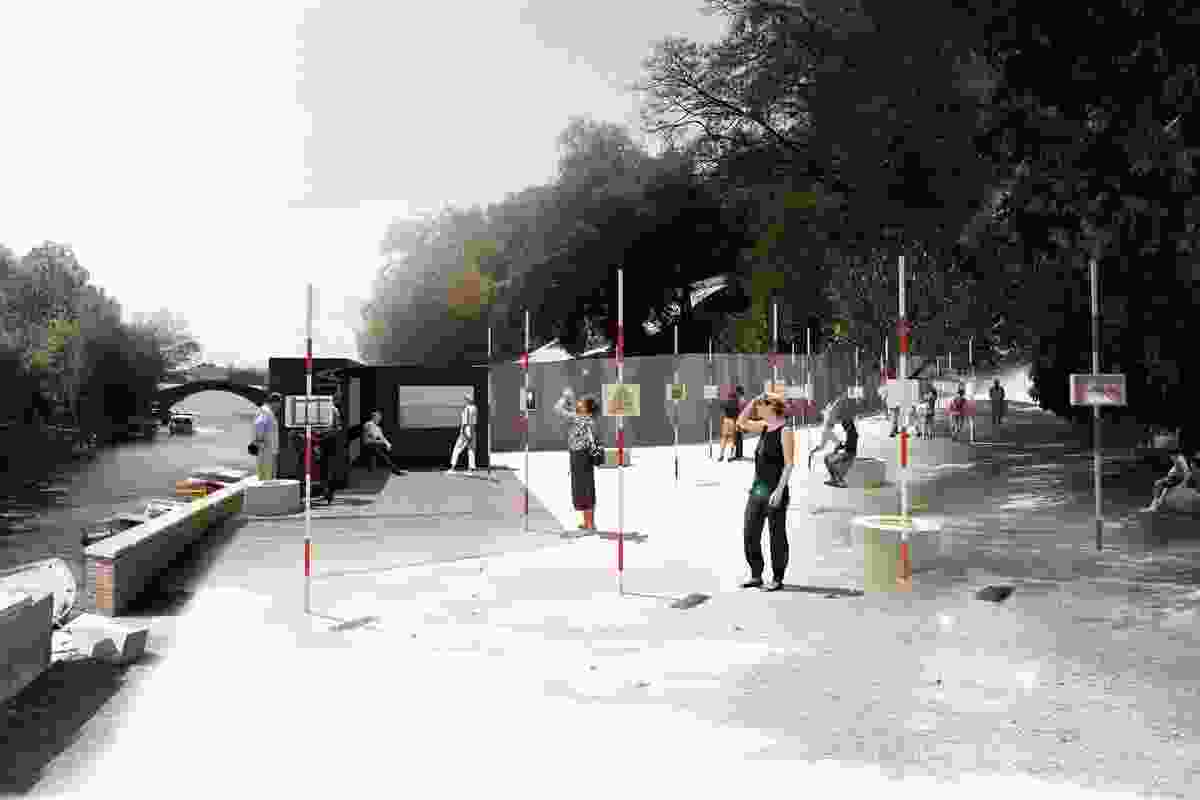 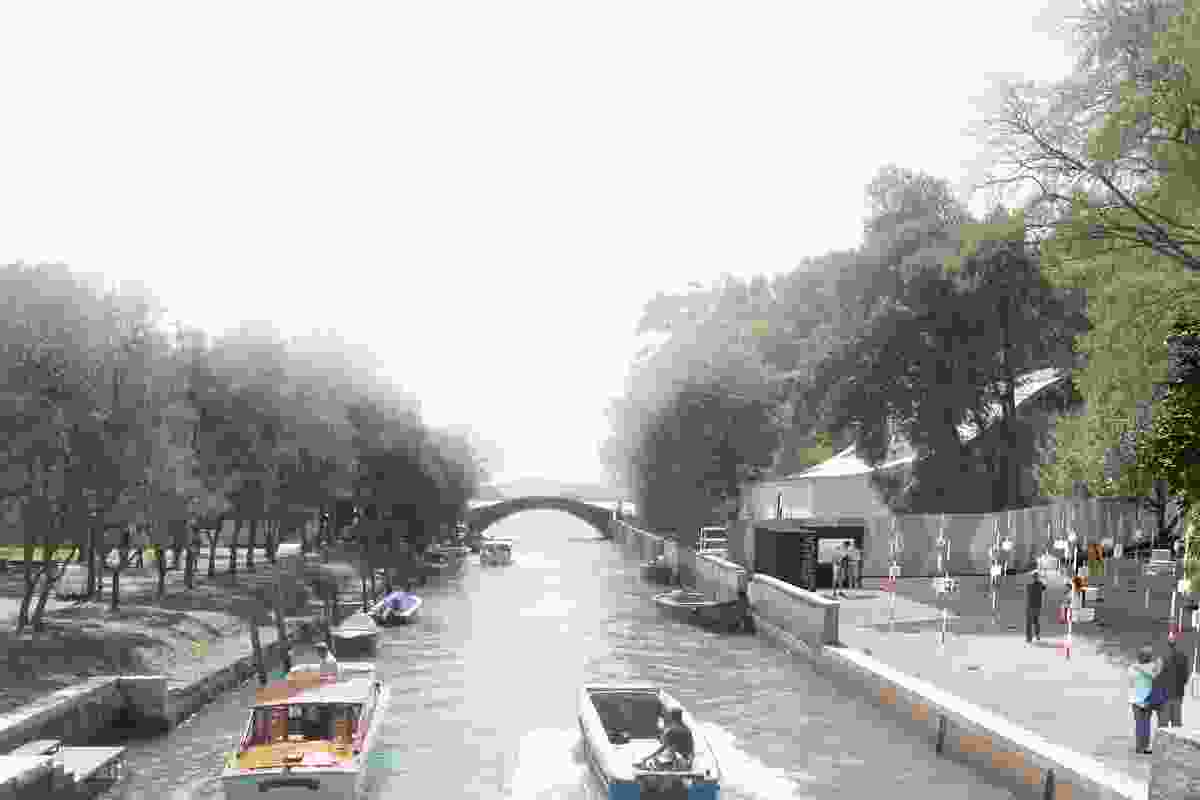 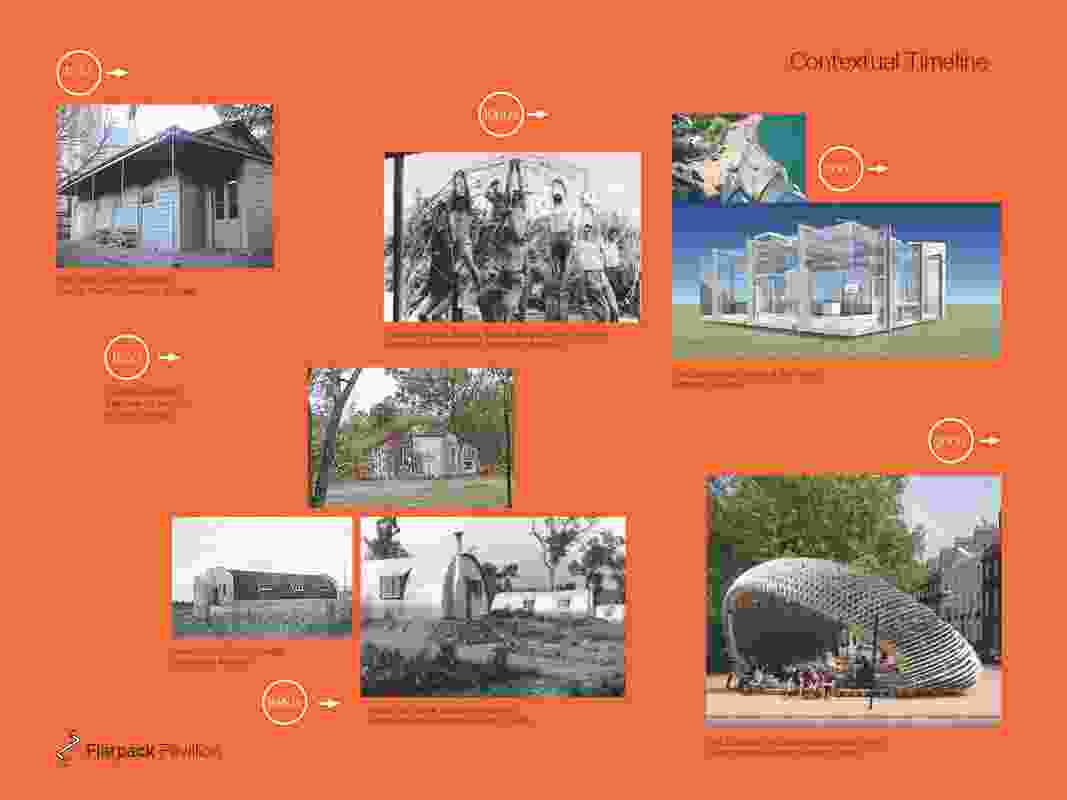 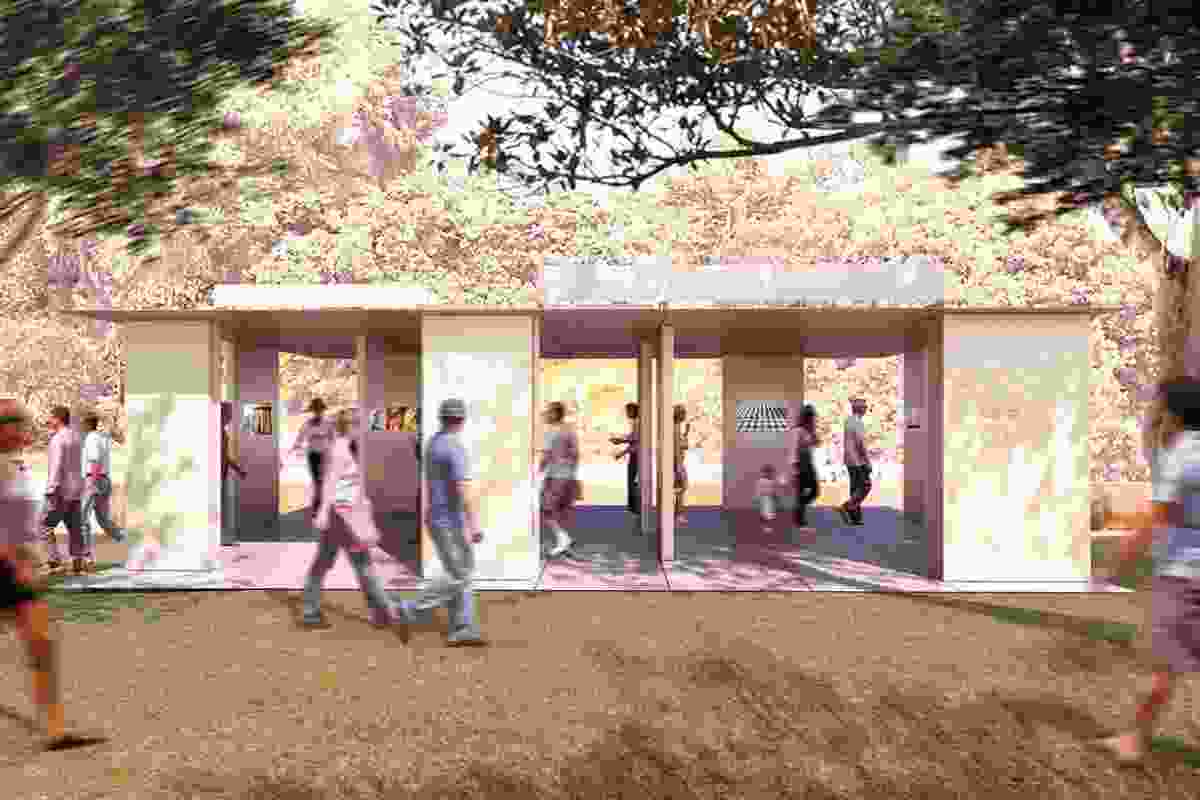 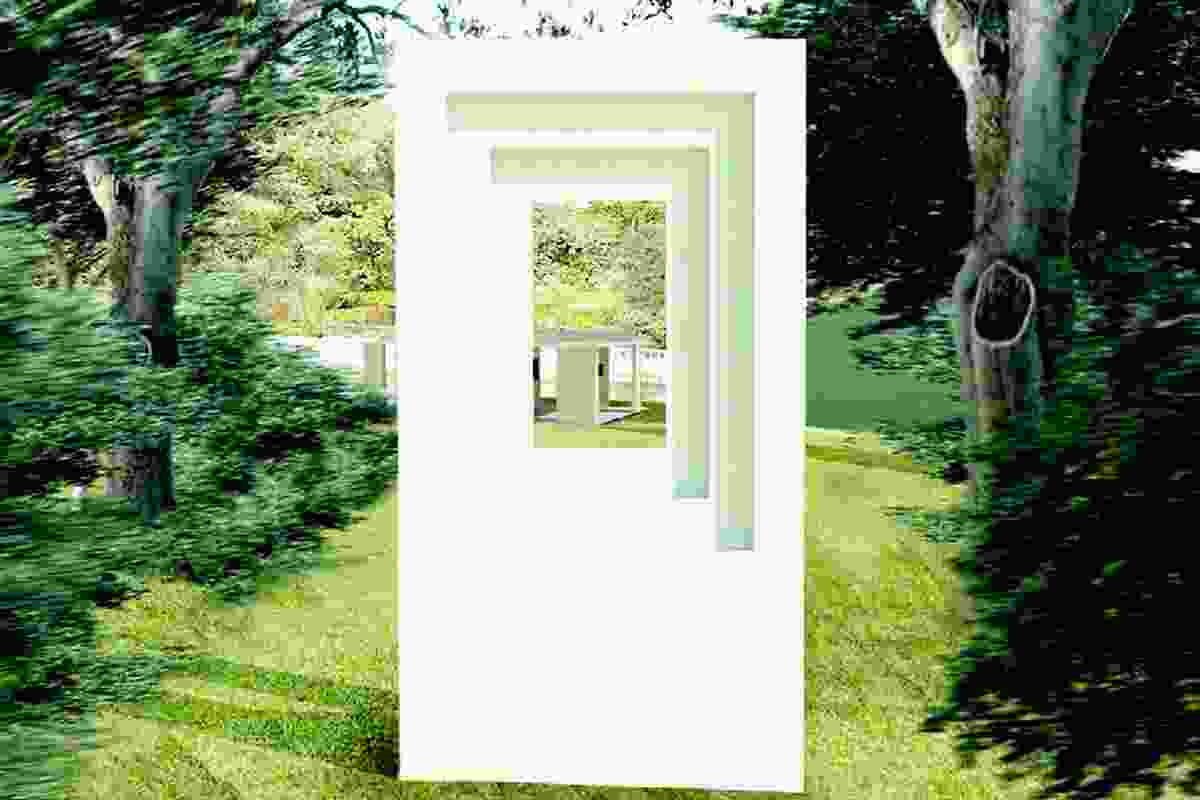 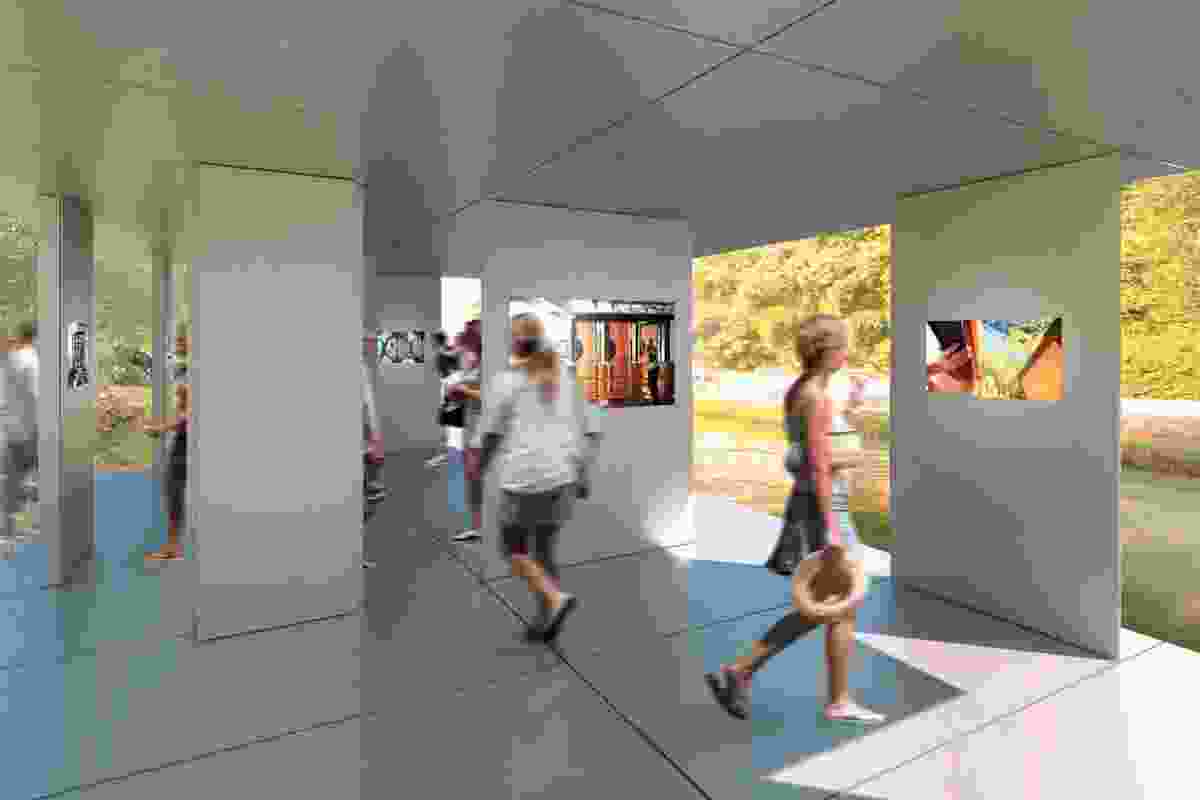 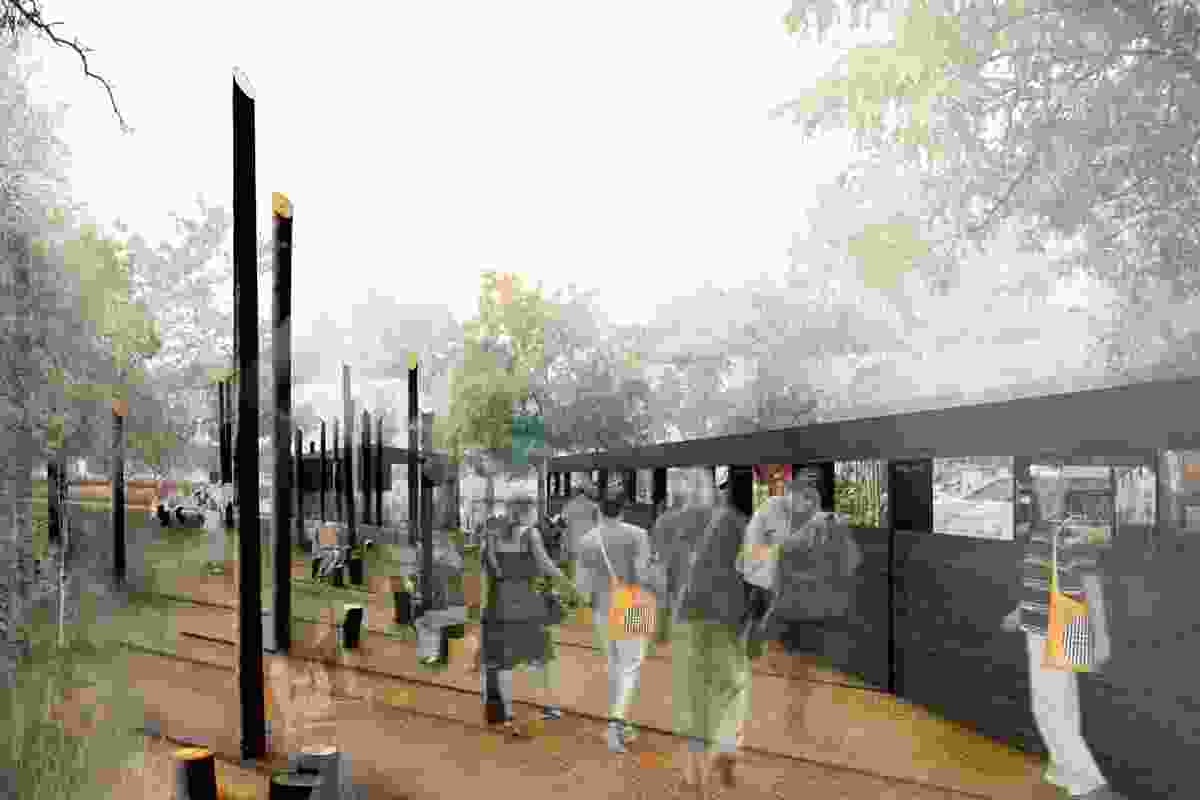 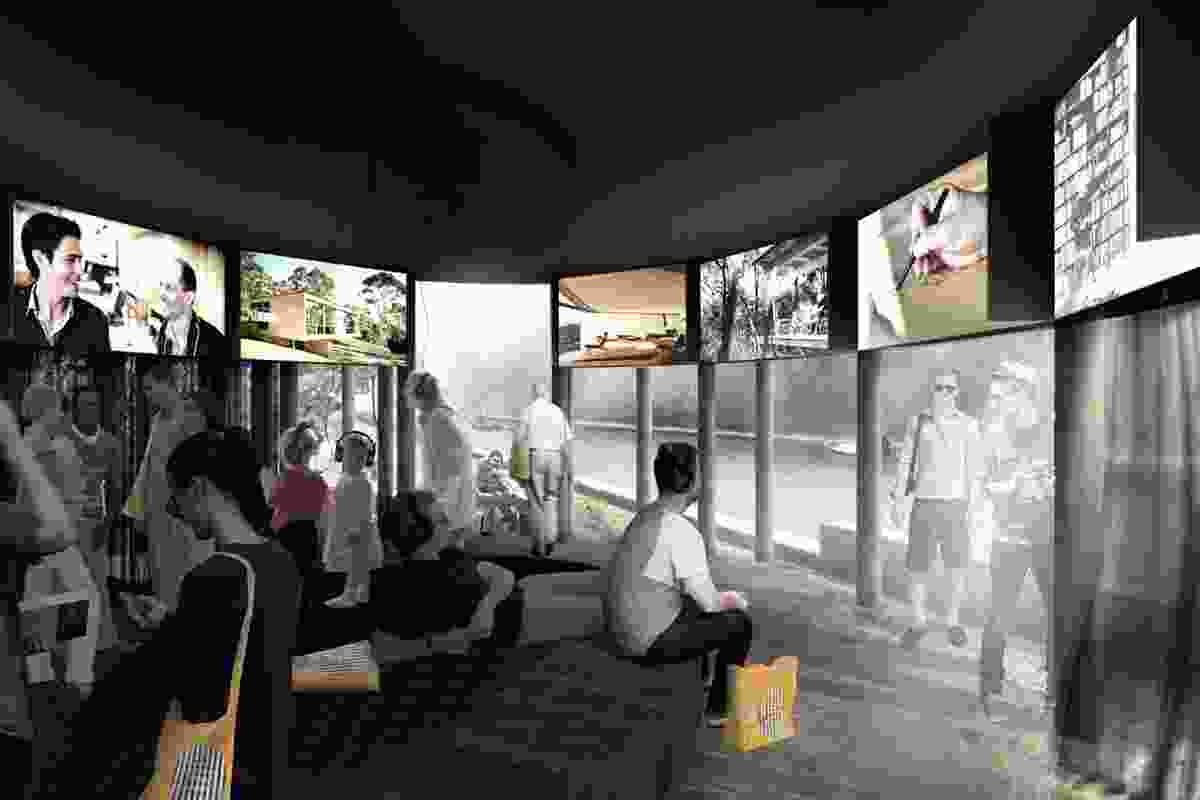 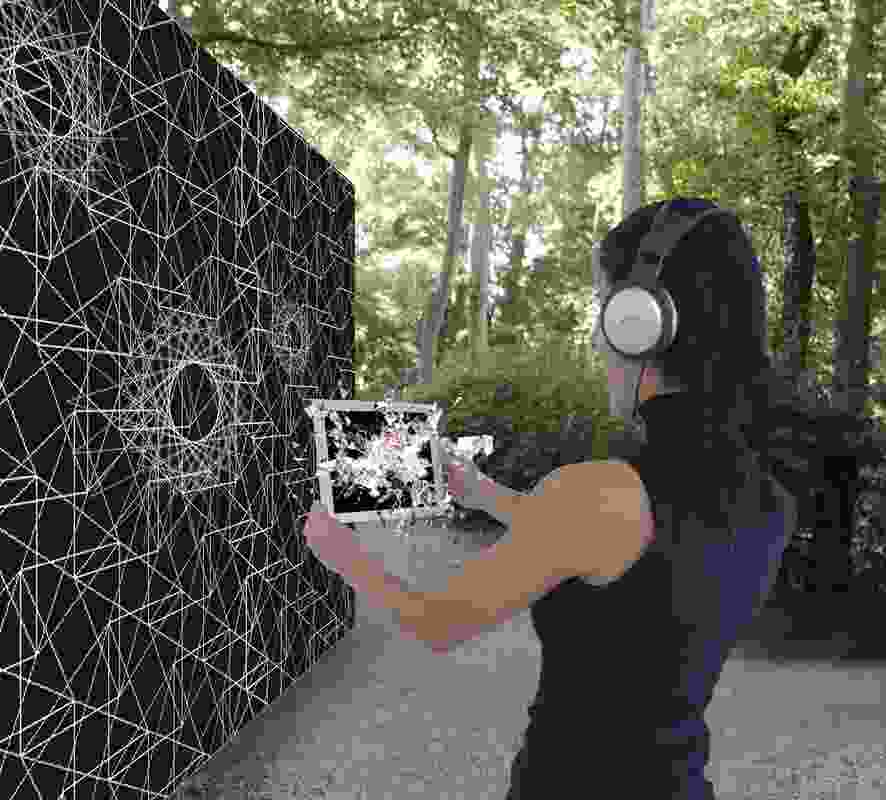 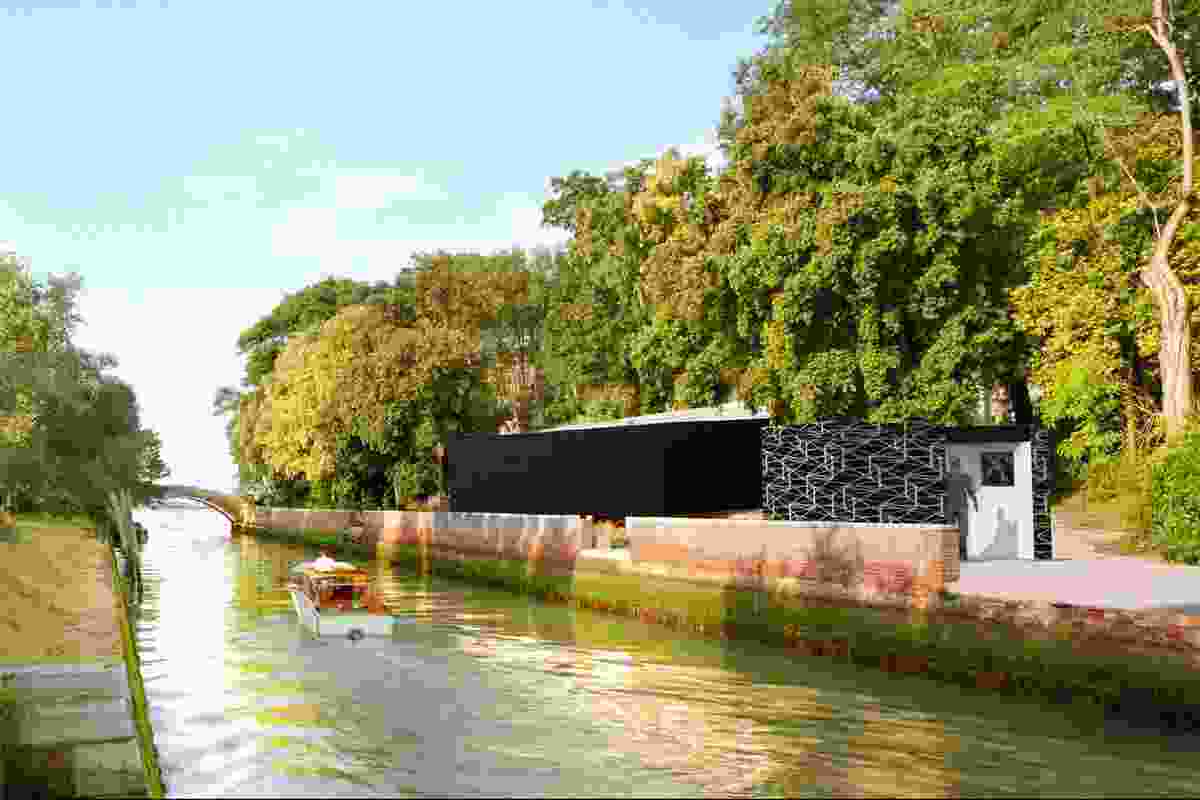 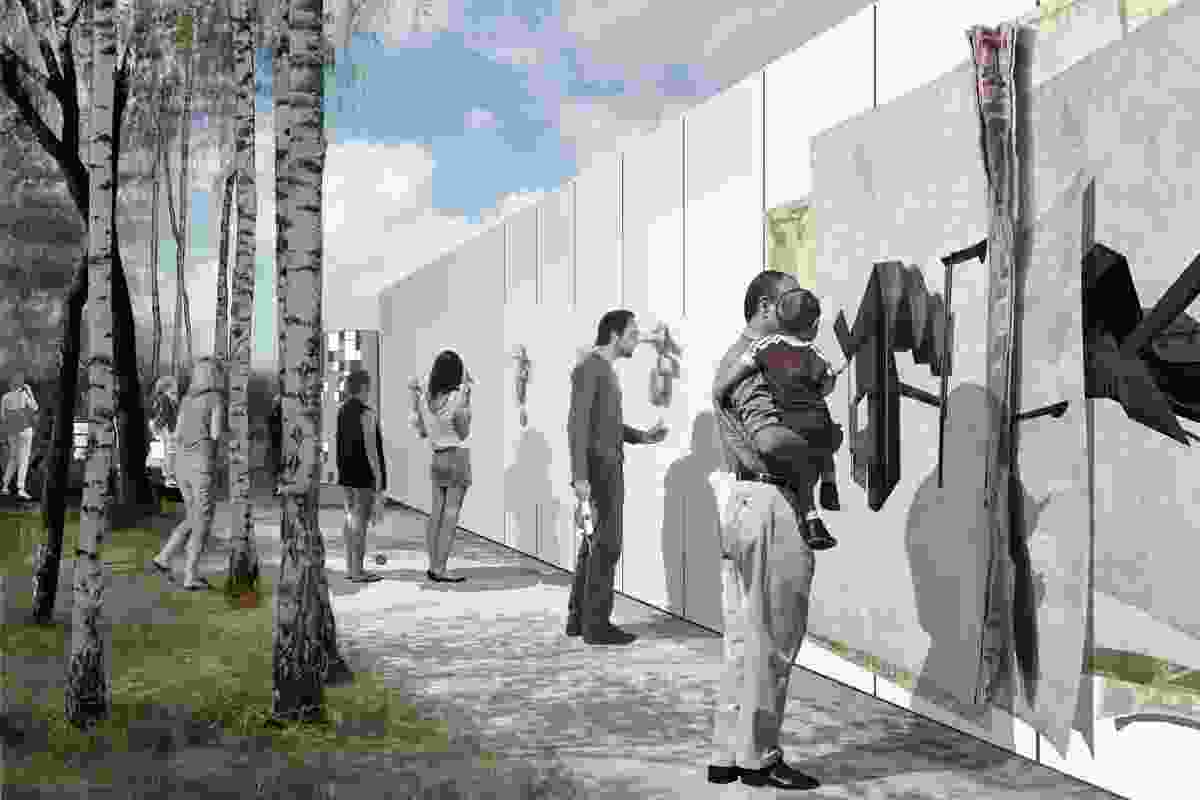