Experienced like a piece of immersive installation art, this new beachside home by Robin Williams Architect encourages its inhabitants to engage all their senses.

The main living space or salon can be opened to views of water at either end – a pool to the north-east and the ocean to the south-west.

As architectural photographs often do, the images of Villa Marittima present a bold dwelling with very few signs of inhabitation. What is surprising is that the home appears the same in the flesh. Minimalist living takes commitment, and commitment is what architect Robin Williams does best – both to his ideas and to the way he prefers to live.

When Robin designed Villa Marittima he had owned an old fibro beach shack on the site in St Andrews Beach, on Victoria’s Mornington Peninsula, for twenty-six years. He was already in tune with its climate, seasonal changes and context. The site is located down the road from houses by Sean Godsell and Fender Katsalidis, and Robin, like his architectural peers, saw the opportunity in the location. Inspired by the simplicity and subtlety of Japanese architecture, he wanted his project to be about light, outlook and space.

Villa Marittima, or “house by the sea,” was designed by Robin for himself and his partner Donald. It is both a beach house and a permanent home. Visiting the dwelling is like experiencing an interactive piece of artwork. As you travel down the narrow driveway through the tunnel of tea-trees, a blank wall of polycarbonate appears. The approach is important; it’s about arrival at the beach. Robin refers to his childhood memories on the Sunshine Coast, where he and his brothers would arrive at the coast by car and run up the sand dune towards their first glimpse of the ocean. Arrival at Villa Marittima is a reasonably literal translation of this idea: as the large polycarbonate front door slides open, you are faced with an inclining concrete floor that leads the way to an unobstructed view of the St Andrews Beach coastline.

According to Robin, this house is not a house. Rather, it’s a “building comprising a series of flexible spaces that connect to each other. It’s a bare form, a simple idea, a villa.” The sloping entryway is also used as a bedroom, a study and a living room – but then any of the other spaces can be used in these ways, too. The connecting element is the central spine that contains the toilet, shower, laundry, television, clothes storage, office, library, fireplace and kitchen. All these amenities, including the kitchen sink, are hidden behind the polycarbonate surfaces and are only revealed as required. This means that everything needs to be packed away once you are finished with a particular activity. This isn’t an ideal way of life for everyone, but it suits Robin and Donald perfectly.

The salon of the villa frames water at either end of the double-height space. Large glazed panels open to the ocean and to the contained pool, using a detachable doorhandle that suctions onto the glass as required, avoiding any unnecessary detail. The pool is an integral component of the experience of the villa – it not only adds drama to the salon, it is also visible through an aquarium-like window on the level below. Like a James Turrell artwork, it is open to the sky and changes as the light does throughout the day. A submerged yellow bridge leads the way across the water to a hidden door to the roof terrace. In a similar configuration to the entry sequence, the turf roof deck inclines up to a view of the ocean and the endless sky.

Material choice was paramount in the execution of this project. Semitranslucent polycarbonate walls wrap the interior spaces, allowing diffuse light to fill the interior during daylight hours. After visiting the Laban Dance Centre in London, Robin was convinced to specify the particular type of polycarbonate that was used by Herzog and de Meuron in the centre’s design. The photographs accompanying this article show how the colour of these panels changes from white to blue, to grey and to purple. Although there is no insulation material in these walls, a rating of 2.5–2.9 R is achieved for the external walls due to the layering of airspace and panels – just like double glazing.

The lower-level space is another multifunctional zone and with its own kitchenette and separate entryway, it can be used independently from the upper levels. The undercroft sits adjacent to a pond that marks on site where the main entry/living wing is lifted from and cantilevered above. On clear nights the pond reflects the night sky, adding another layer to the experience of the space as an artwork.

This intriguing building was a labour of love for Robin and he is now enjoying the fruits of his hard work. Each evening, he and Donald can watch the sun set across the expansive view of the horizon to the west. It’s at this time that drinks and nibbles come out. Villa Marittima is the setting for Robin and Donald’s daily life, but easily adapts to visitors, whether a single family member, a handful of dinner guests or a pool party. The minimalist interior seen in the photographs is often joyously full of people. 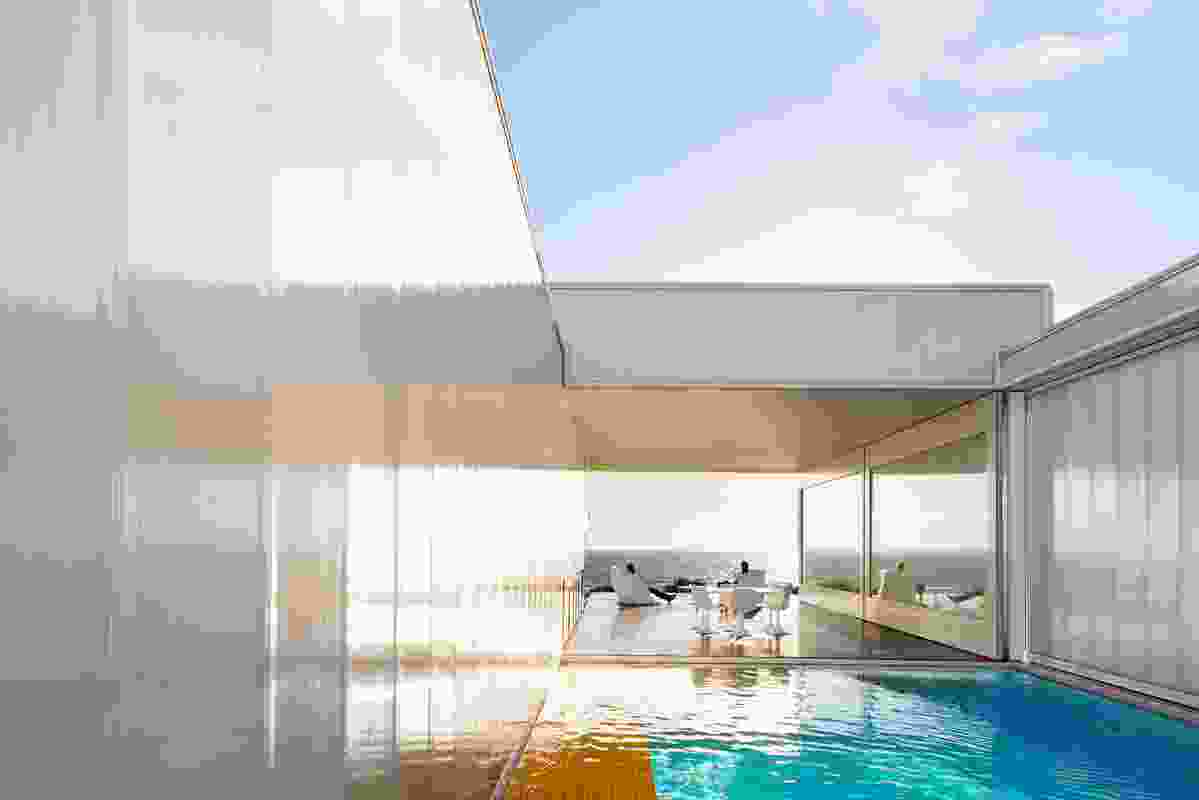 The main living space or salon can be opened to views of water at either end – a pool to the north-east and the ocean to the south-west. 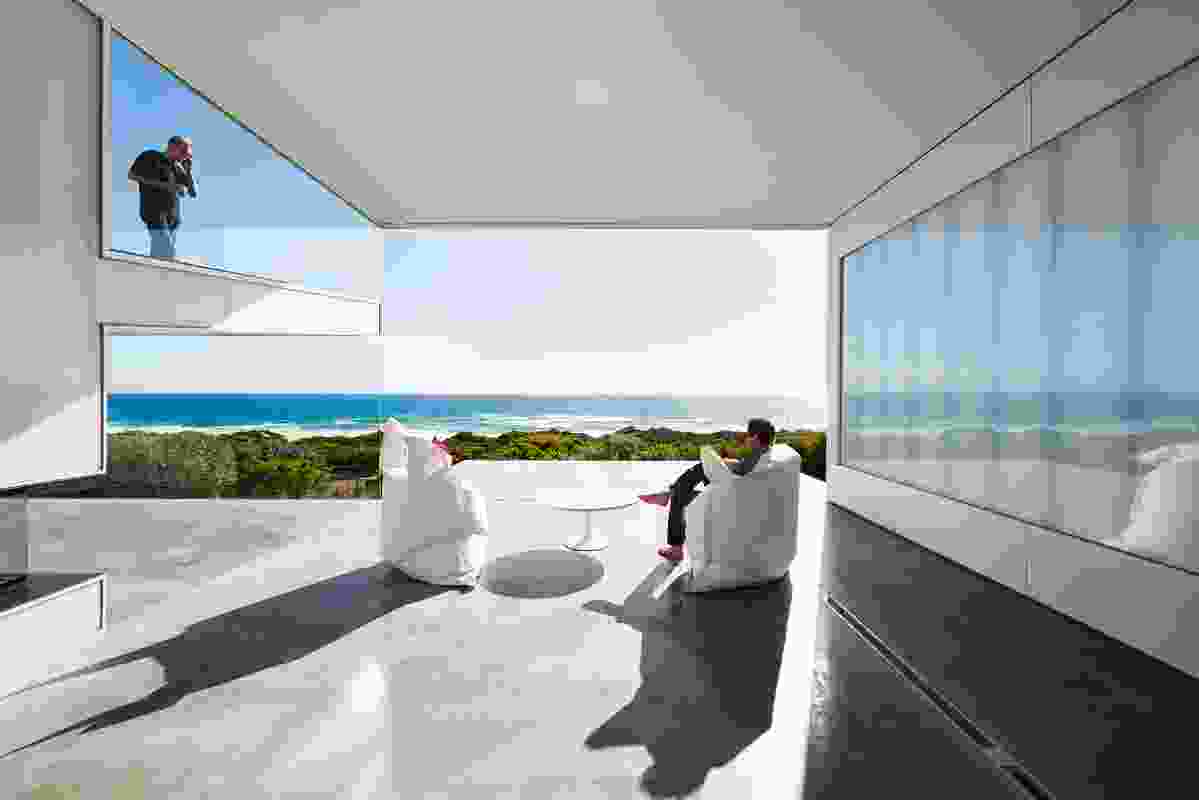 Strip lighting is set into the concrete floors so that the ceiling is free from any detail. 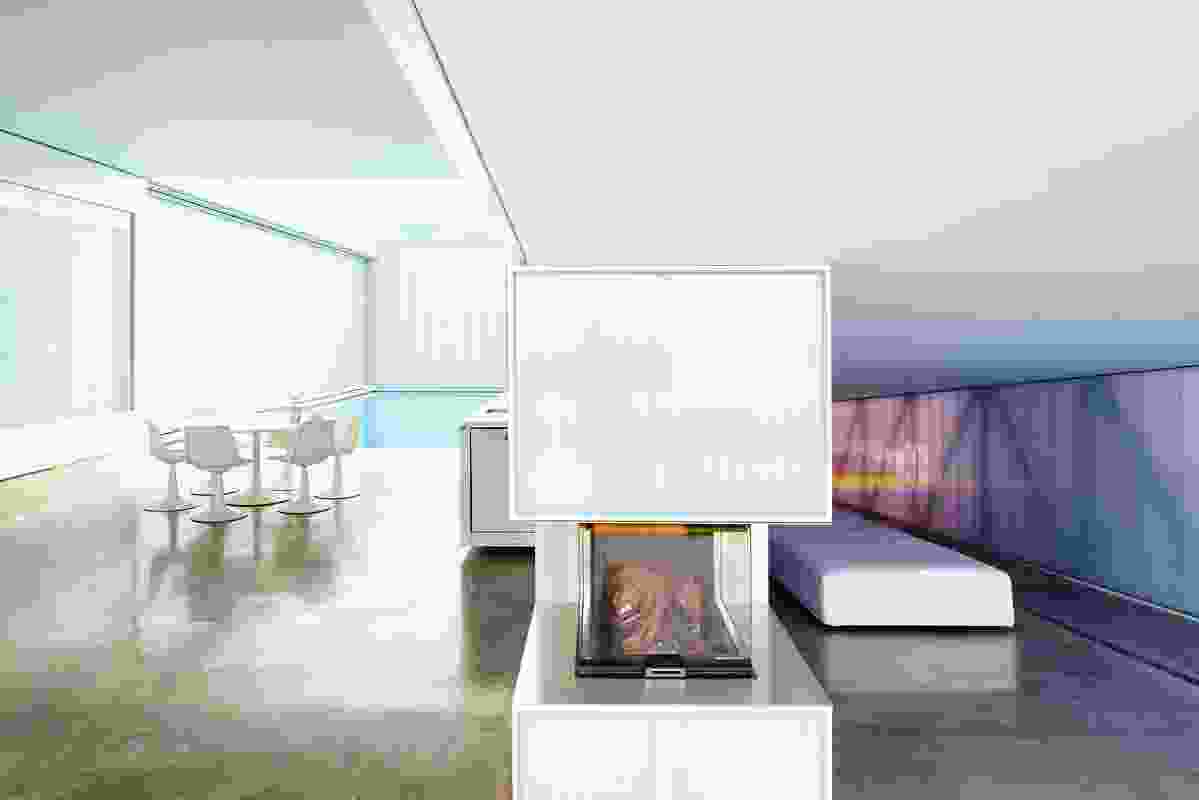 A glazed fireplace within the central spine connects the salon to the inclined entrance. 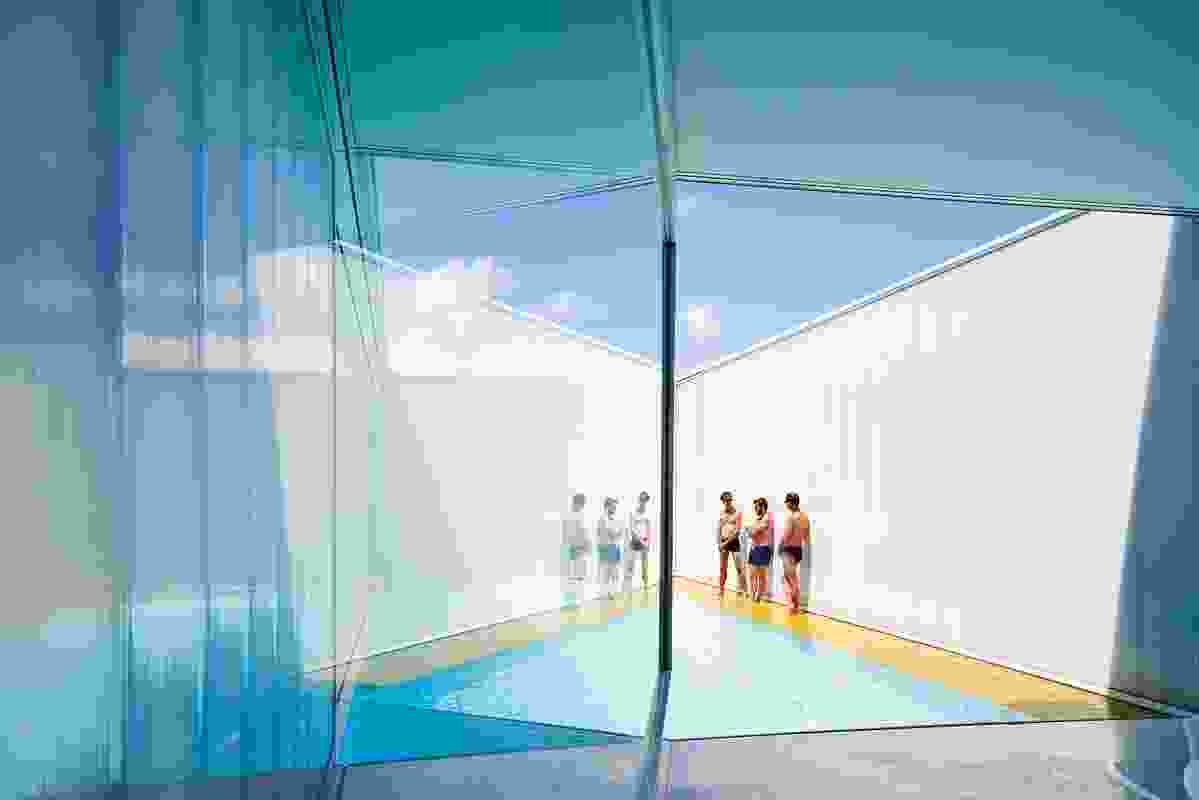 Like a James Turrell artwork, the pool is open to the sky and changes as the light does throughout the day. 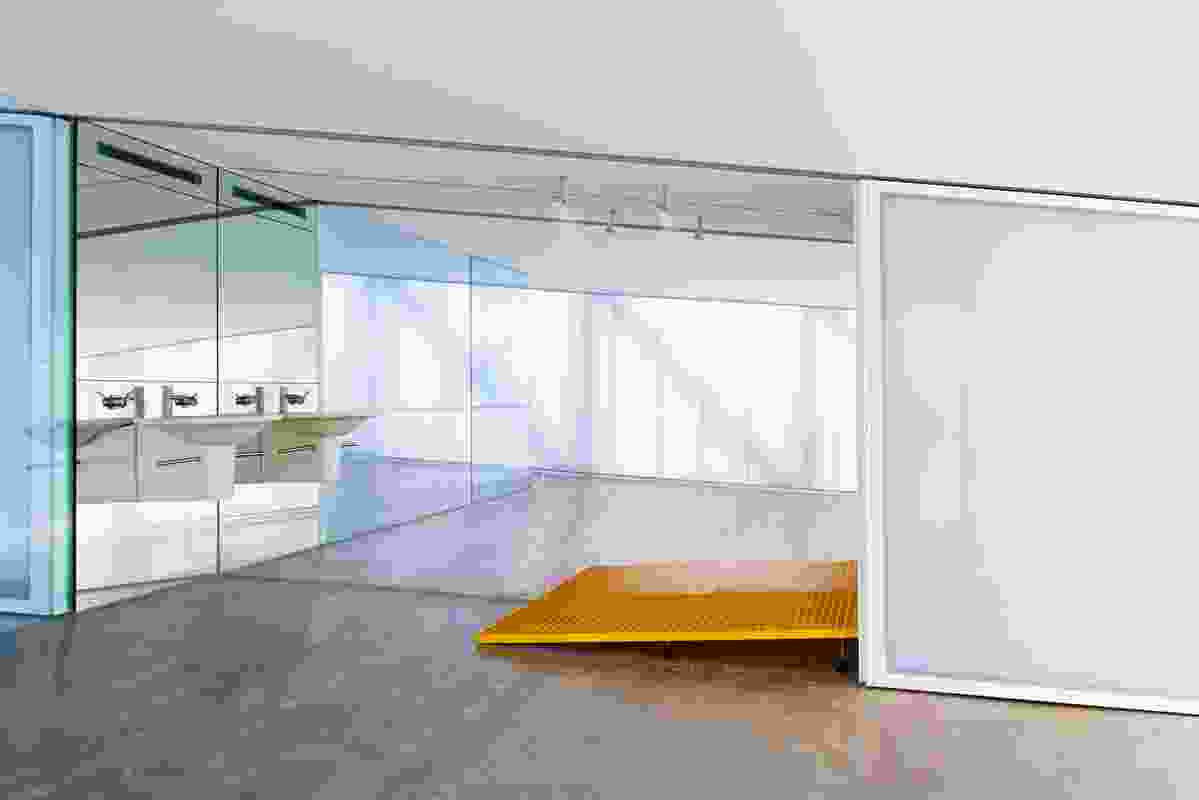 Polycarbonate sliding doors pull back to reveal all services, including the narrow bathroom. 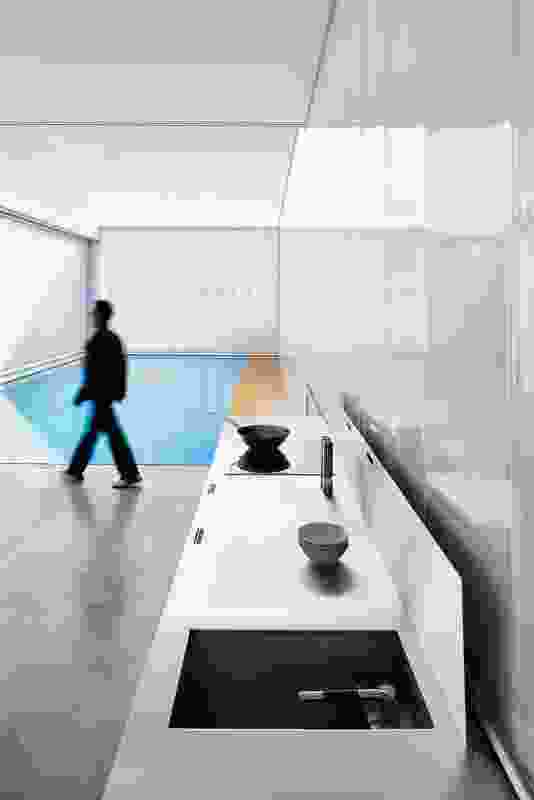 The stainless steel kitchen retracts back into the central service wall after use. 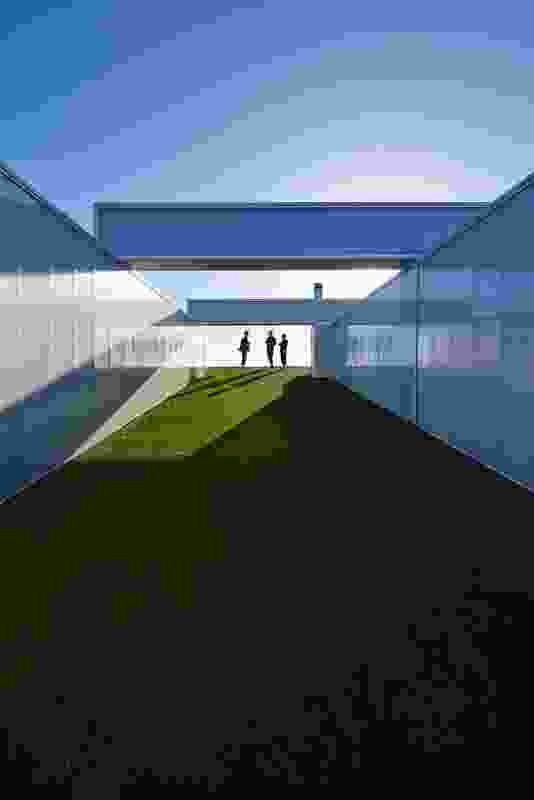 In a similar configuration to the entry sequence, the turf roof deck inclines up to a view of the ocean. 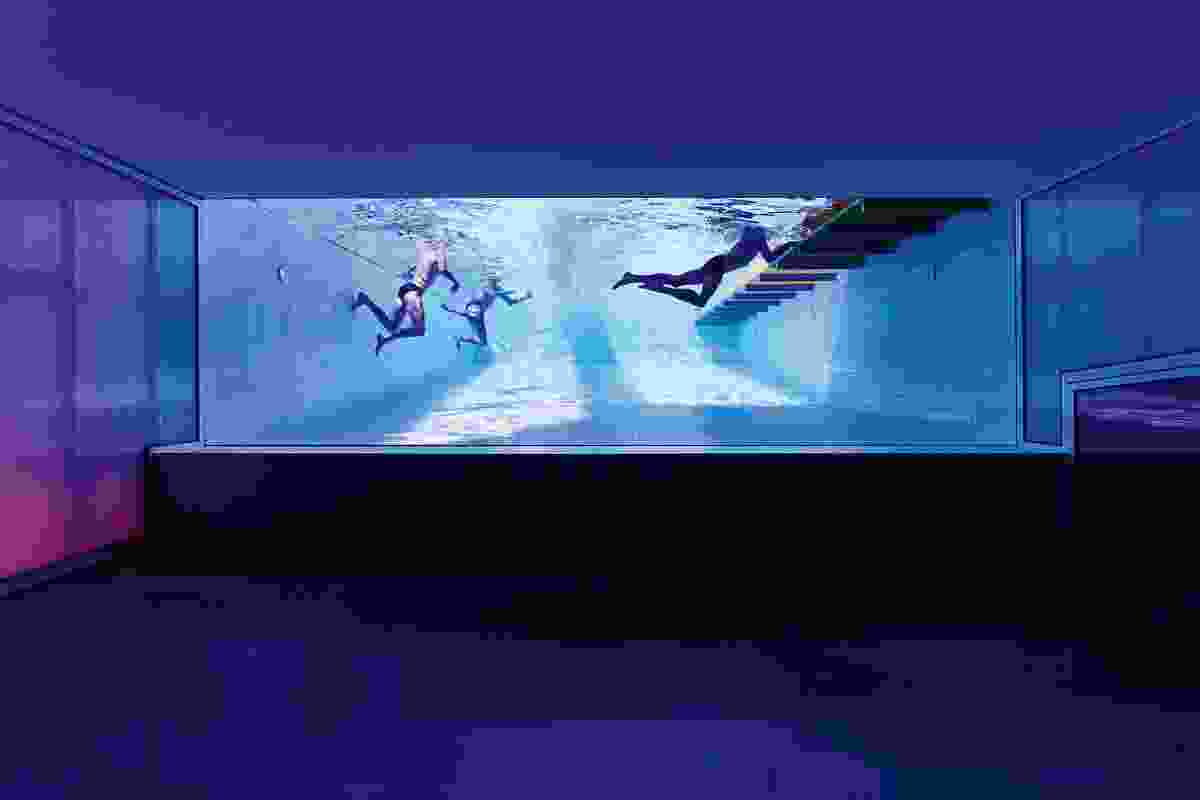 The pool is visible through an aquarium-like window on the lowest level of the house. 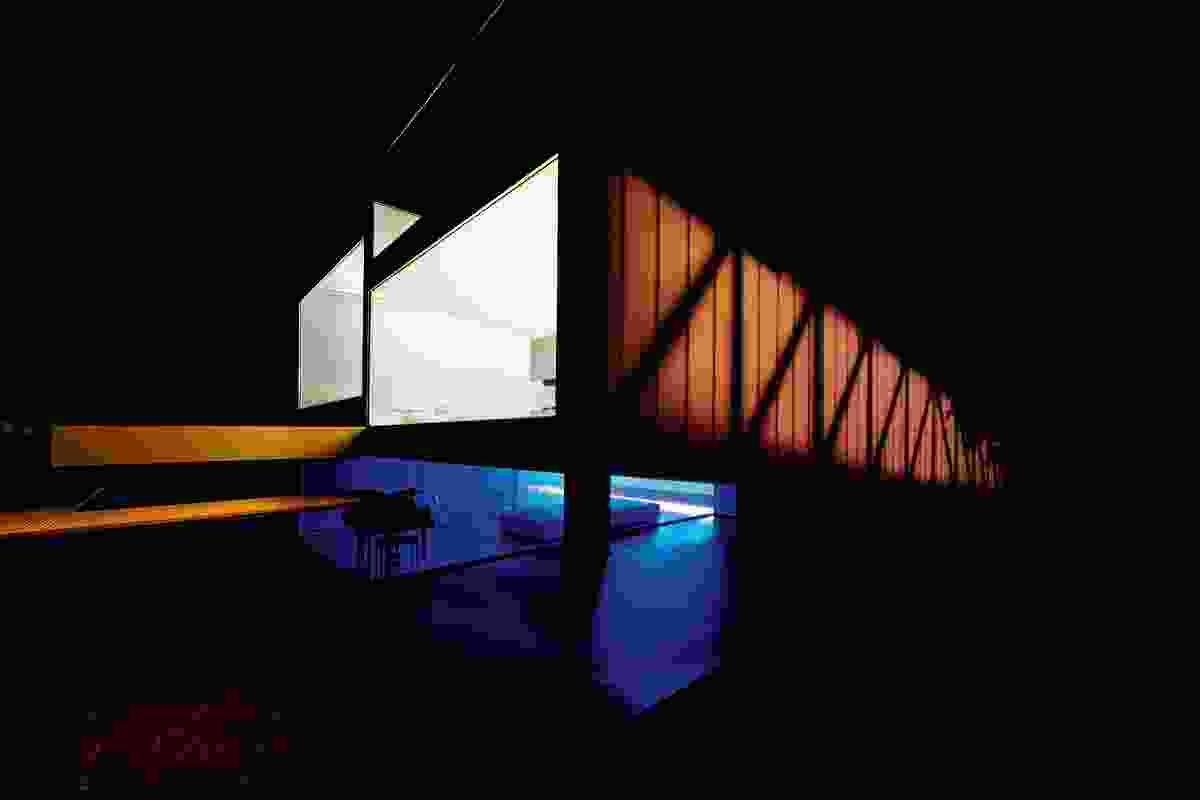 Semitranslucent polycarbonate walls wrap around the structure, creating a lantern effect at night.