This quintessentially Melburnian restaurant boasts inky black interiors by Elenberg Fraser inspired by an imagining of how the Yarra River flood plain would have looked pre-settlement.

Kangaroo hide and fur covering the chairs creates a surface you want to touch.

Vue de Monde is, and has been for at least five years, Melbourne’s “It” restaurant. Its trophy cabinet is filled with restaurant of the year awards, its brand has expanded to include a CBD bistro and a raft of cafe outposts at key cultural locations, and owner Shannon Bennett has emerged as a one of Australia’s most well-known and revered chefs. Publicly, Vue de Monde has nothing to prove. And yet, when a party of diners crosses the cavernous corporate atrium of the Rialto Towers en route to the restaurant’s new premises, their sense of anticipation and expectation is so palpable, so real, you feel you could grab it, sear it quickly on both sides and plate it up with some chestnuts, wild garlic and cherries. They booked months ago. They’re prepared to pay upwards of $500 per head for a degustation with matched wines. These people are excited. And so, on this personal level – the level that really matters – Vue de Monde has everything to prove.

Of course, this sense of anticipation and expectation is largely about the food, but people come to Vue de Monde for a singular “experience.” The environment in which they eat and talk and drink is fundamental to this. The restaurant’s new location, in the former observation deck of Melbourne’s second tallest building, speaks directly to this desire for something out of the ordinary – diners are shot up and out of their everyday world in a dedicated express lift to level fifty-five. The dramatically vertical journey immediately dislocates Vue de Monde from the rest of the city’s restaurants, which famously huddle behind unmarked doors, lurk down obscure laneways or, for a bold few, leer out over the Yarra from a large casino. And yet the fitout, which was designed by architects from Elenberg Fraser in close collaboration with Bennett, and includes a large function space and rather opulent bar, is arguably the most deliberately, thoughtfully Melburnian hospitality interior of all.

For starters, it’s black! Inky black! And combined with a sparse, elemental treatment of fittings and furniture, this serves to bring attention to the panoramic view of the city. Where most Melbourne restaurants rely on the occasional rattle of a passing tram to provide context, Vue de Monde takes an approach more akin to Google Maps. With the bay, Docklands and other parts of the city in clear view, there’s no question where you are.

But the link to Melbourne also plays out in ways much more intrinsic to the design. The conceptual leaping-off point for the fitout was the Yarra River flood plain, imagined as it would have been before European settlement: an estuarine idyll shrouded in reeds and populated by waterfowl and fish; a food bowl and meeting place for the Wurundjeri people; cool, tranquil and anathema to modern, masculine cliches of Australianness. This has been translated in both the broad ambience of Vue de Monde and in specific, more literal details. Honed bluestone floor tiles recreate the glossy black stillness of the water’s surface; reed-like motifs appear in the lift and restaurant lobby; and at night, the sparkling lights of the city twinkle like the Milky Way would have before it was polluted by, well, all those sparkling lights.

In the dining room, irregular clusters of pendant lights by Melbourne glass artist Emma Lashmar hover above each table like fireflies, washing each small group of diners in a warm glow that amplifies the quiet intimacy of the space. The tables and chairs, designed in collaboration with another Melburnian, Ross Didier, are clad in kangaroo leather, in many cases still with bullet holes, scratches and seams in evidence. Some of the chairs are also backed with kangaroo fur. It’s the kind of furniture you want to touch.

This sensual gravity of the table is heightened by settings crafted from rocks (hand-sculpted by artist Tom Samek, and storing salt and pepper) and wood (blackened Grange vines from Penfolds vineyards). Staff rearrange them during the meal and diners stack and play with them. The effect of the leather, fur, stone and wood is of a tactile authenticity a million miles away from the starched linen tablecloths of the posh restaurant archetype. The materials and forms are literally evocative of the natural world, of the billabong and the bush, and they undoubtedly help to transform “meal” into “experience.”

Not far away, chefs can be seen hard at work in the open kitchen. There are no flames to evoke a campfire – induction cooktops are preferred for reasons of sustainability – but there’s certainly something timeless about the quiet, hard graft on display. It also sets up a neat juxtaposition: in one direction, the view takes in the limitlessness of the universe; in another, we see, close up, the admirable workings of humankind.

The only deliberately exuberant element in the dining room is a large white neon artwork, An Interpretation of This Title: Nietzsche, Darwin and the Paradox of Content by American conceptual artist Joseph Kosuth. It’s an interesting choice and, regardless of any intended thematic link between its philosophical underpinnings and the Vue de Monde fitout, the artwork tempers the “literally natural” character of the space just enough. Its presence, on the wall and reflected in the windows, comes as a welcome admission of context. “It’s okay. We know it’s the twenty-first century and we’re in a really exclusive restaurant. Enjoy yourself. It’s an experience.” 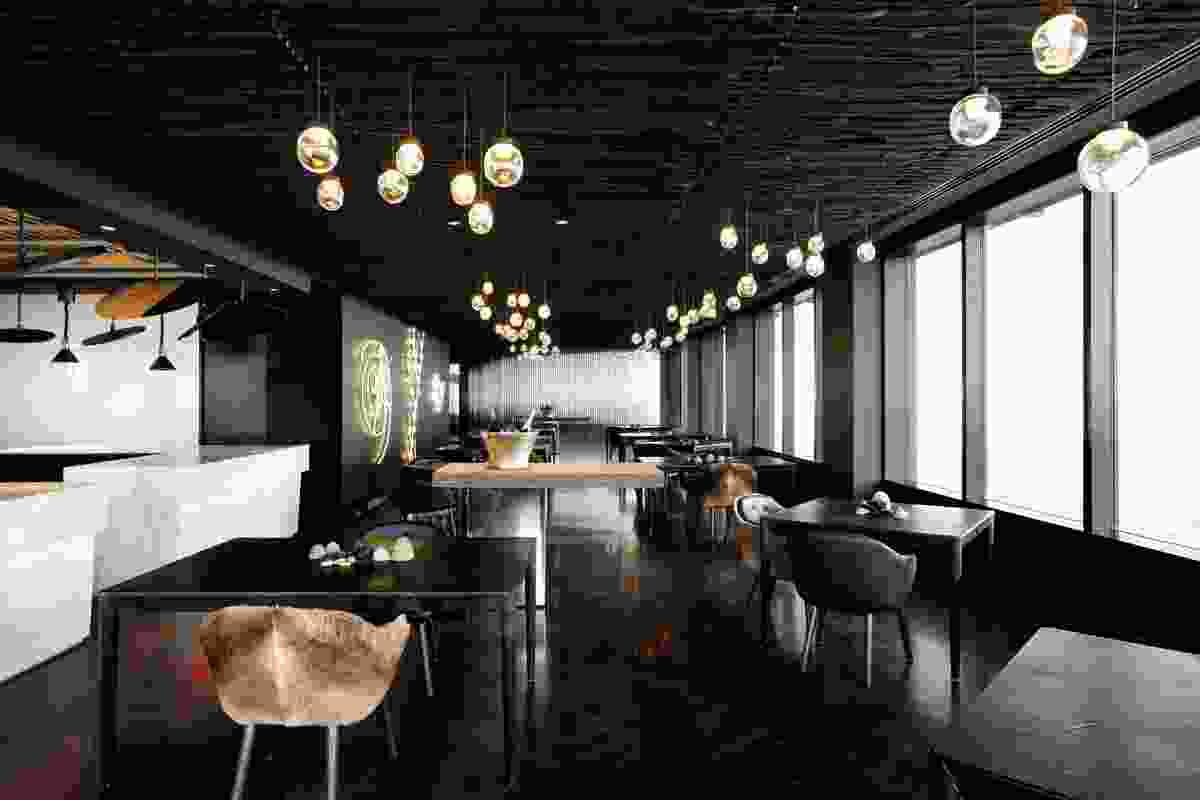 Kangaroo hide and fur covering the chairs creates a surface you want to touch. 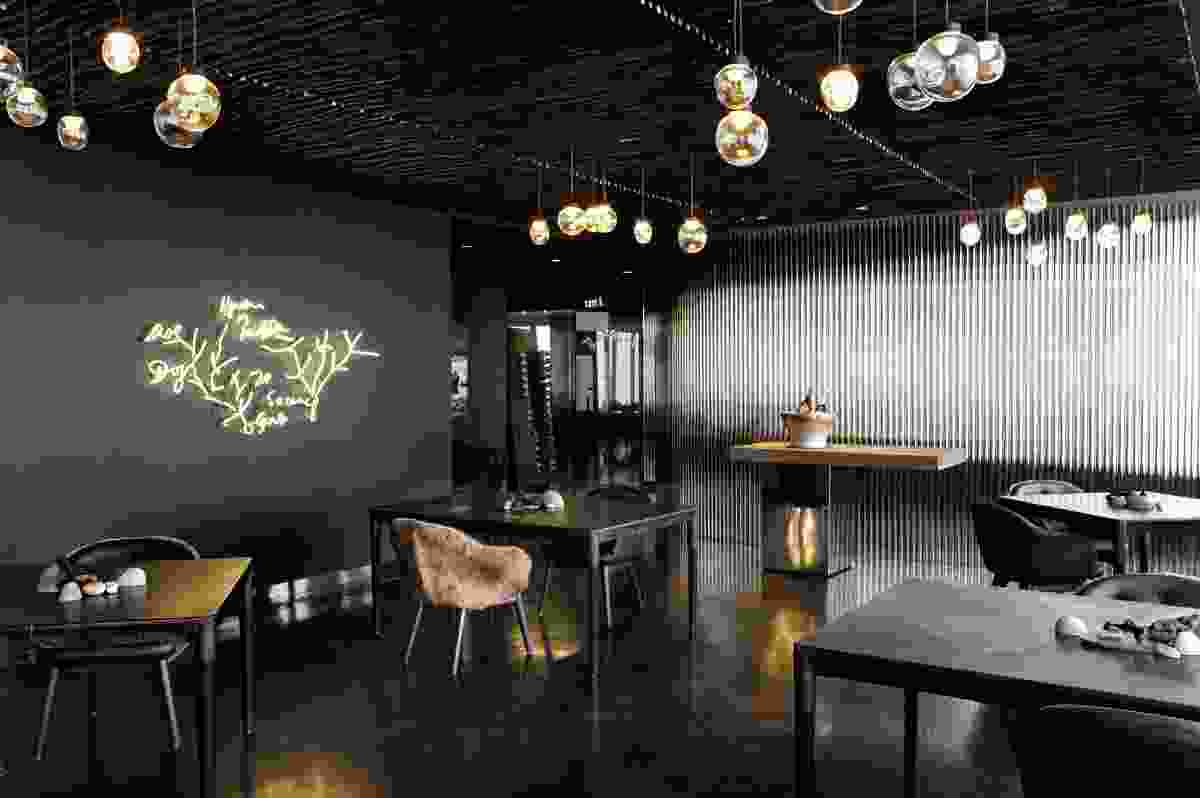 The neon text work is by artist Joseph Kosuth, with the tables and chairs designed by Ross Didier. 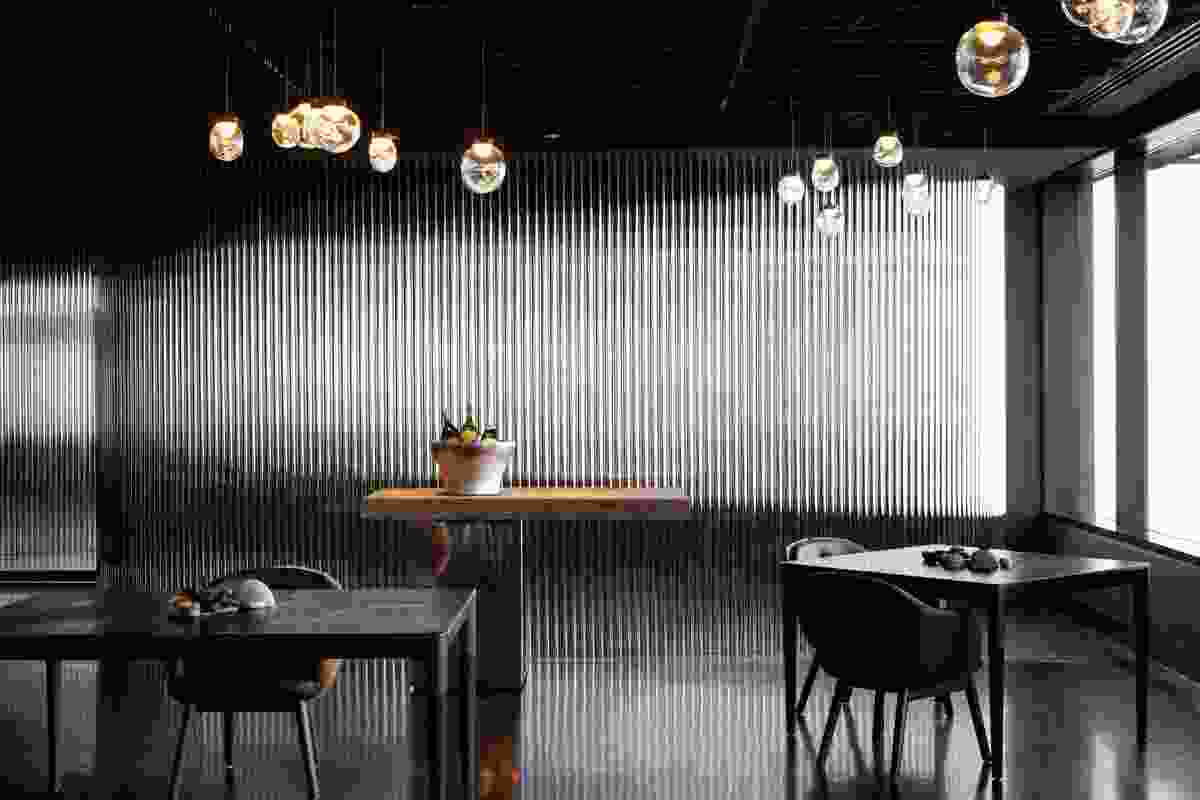 The dining room is silver and black and lit by hand-blown lights by Melbourne artist Emma Lashmar. 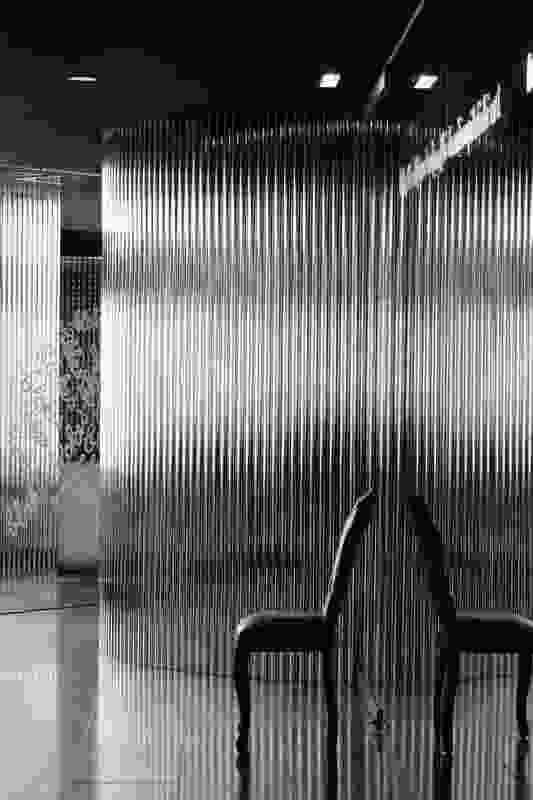 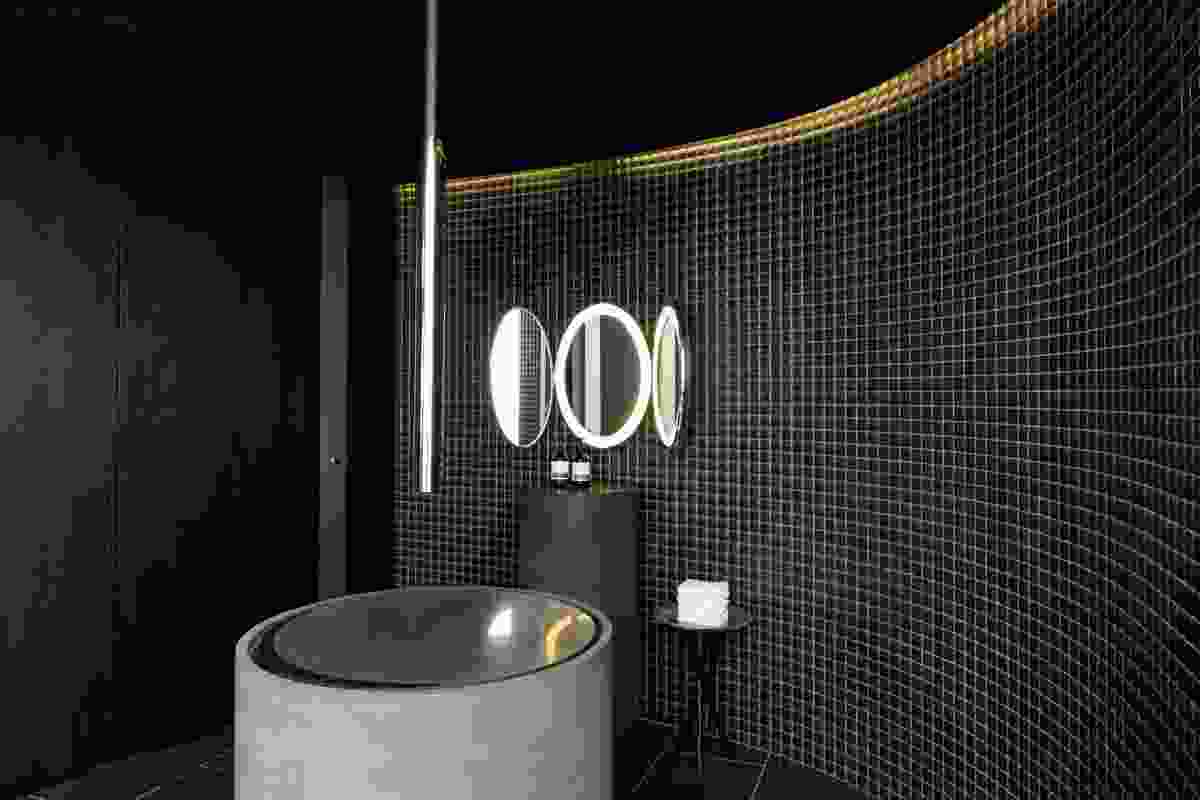 The bathroom contains a series of circular shapes, with black steel basins. 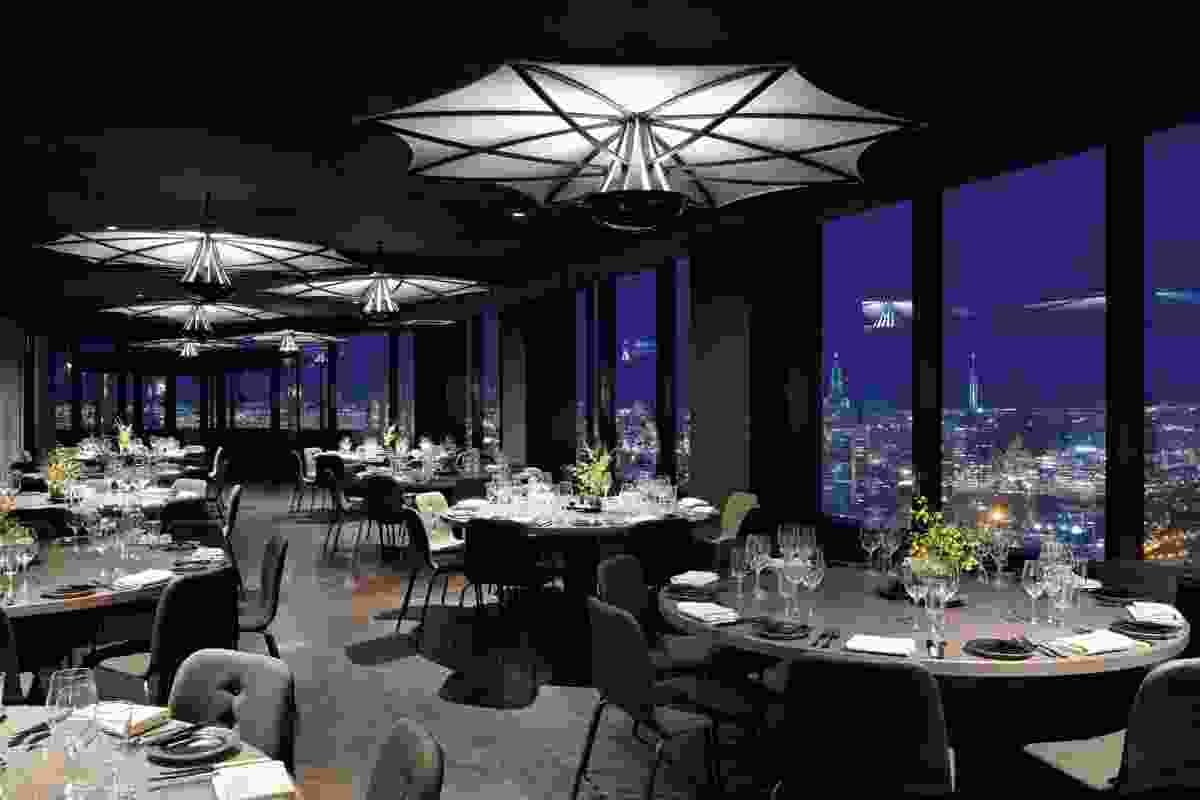 The restaurant’s location at level 55 of the Rialto means stunning views. 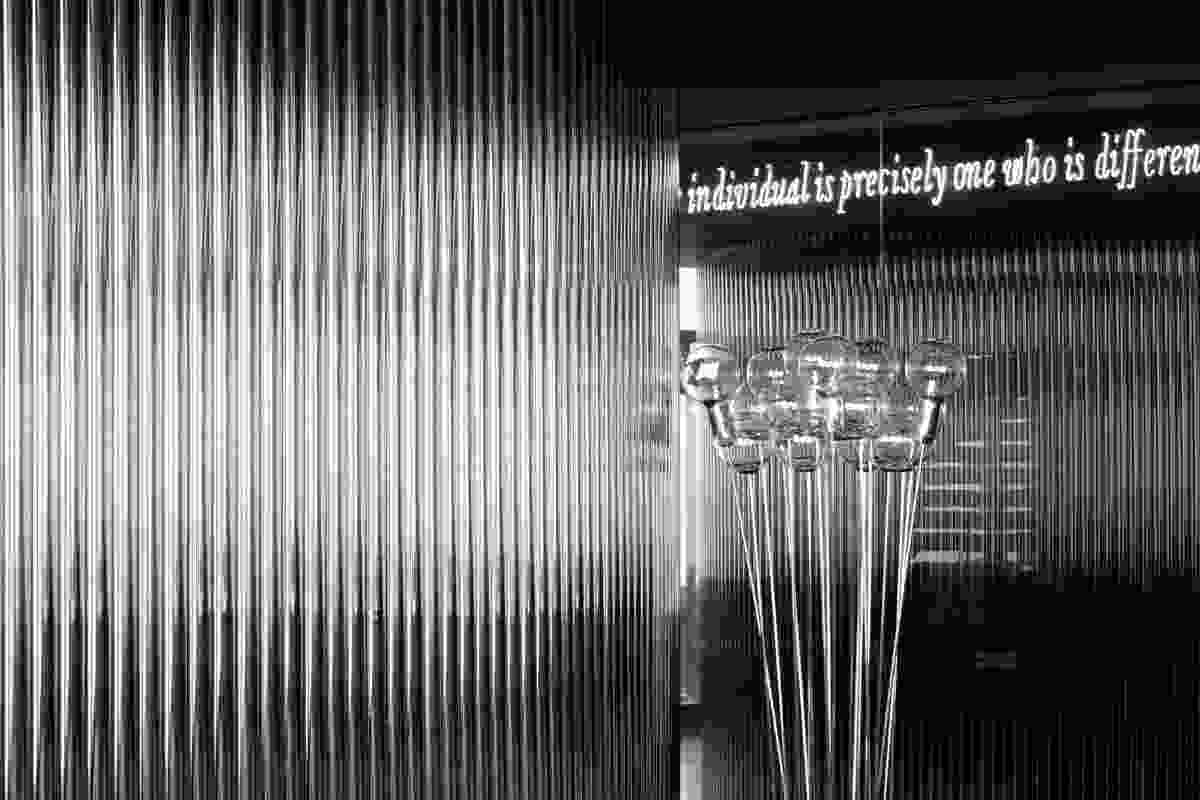 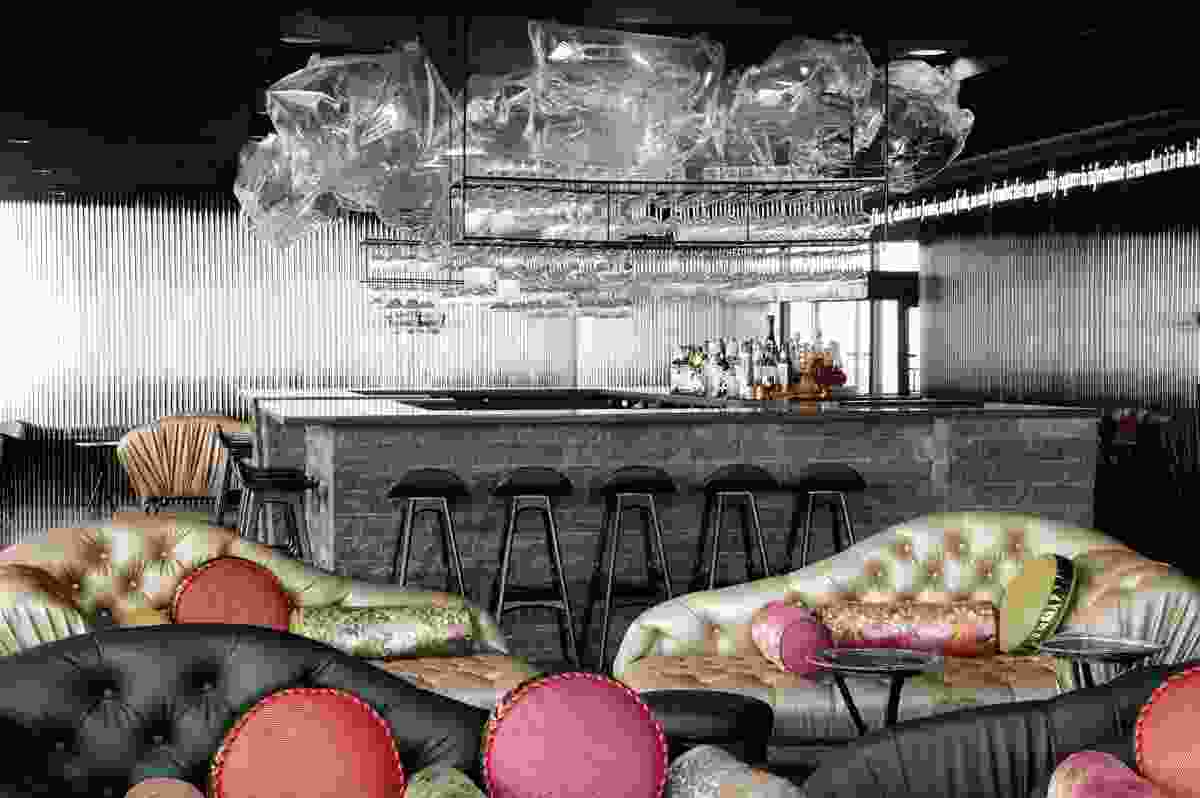 Above Bar Lui, an installation called The Cloud by artist Mikala Dwyer is made of suspended plastic.