‘Queenslanders in the sky’: Walan

Apartments in an iconic block on Brisbane’s Kangaroo Point Peninsula retain the best features of the rustic Queenslander while fulfilling the needs and expectations of contemporary urban dwellers.

While Bureau Proberts’ design for Walan allows a high degree of visual connection to the outside world, views are filtered by carefully oriented vertical louvres.

The Kangaroo Point Peninsula is a slender strip of land, 1.3 kilometres long and defined by the bend of the Brisbane River. It is shaped by water and cliff, with a central vehicular spine cutting it in two. The peninsula’s irregularly patterned urban landscape connects to Brisbane’s CBD by the Story Bridge, an iconic and historic piece of the city’s infrastructure.

Shaping the future of this key piece of the city is the draft Kangaroo Point Peninsula Neighbourhood Plan. It anticipates that more than four thousand new inhabitants (an additional 50 percent) will move into the area in the next twenty to twenty-five years, and that these new residents will largely prioritize an urban lifestyle and choose contemporary apartments as their home. This vision extends, indeed intensifies, a recurrent and historic pattern of development on the peninsula – as early as May 1925, a local magazine remarked upon “some very modern flats” that had “sprung up” in the 1920s to address the housing shortage.

Important testaments to this interwar residential development in Brisbane are still evident across the peninsula. The Scott Street Flats – designed by Elina Mottram, Queensland’s first registered female architect – is just one example. Built in 1925 on a double block at 2 Scott Street, this heritage-listed two-storey apartment building overlooks the Brisbane River across a generous vegetated public park. The Tudor-style residence still occupies its original site but it has been transformed as part of the newly completed fourteen-storey Walan apartments, reflecting a symbiotic spatial relationship that interrogates past, present and future living modes in a rapidly transforming urban scene.

Completed in 2018, Walan is the product of a partnership between Brisbane-based architecture firm Bureau Proberts and developer GBW Developments. It is the second project from this partnership, which previously collaborated on the design and construction of the Silt apartments in 2014, another provocative presence on the peninsula. Walan reflects the team’s journey, a creative exploration of alternative contemporary residential typologies that seek to be culturally and climatically sensitive.

Walan is iconic. With its sculptural profile and an articulated chromatic palette that references colours and character of the Kangaroo Point cliffs, Walan affirms its presence on the riverfront by its difference. From across the river, it looks like a future archaeological remain – unusual, provocative, yet familiar and rooted in the landscape. Its verticality is achieved by stacking monolithic horizontal layers, intentionally sized to host individual and individualized dwellings. “Queenslanders in the sky” is how architect Liam Proberts describes them, but designed for contemporary urban dwellers who carry a different set of expectations: breathtaking views, superior comfort and sophisticated, personalized interiors. This building fulfils all those aspirations.

The meticulously designed interiors exploit the essential richness of natural materials: timber, stone and glass define an apparently limitless space that requires only a few personal touches to become home. While the experience is a dramatic contrast to the typically cosy yet rustic Queenslander, key features of this local typology have indeed informed the new residences. The whole-of-floor apartments are wrapped in a skin of movable screens that effectively modulate light and breezes according to daily and seasonal variations of the forgiving subtropical Brisbane climate.

The plan and elevational treatments allow 360-degree visual connections to the outdoor world, with views filtered by wisely oriented vertical louvres. The building’s design and siting enable cross-ventilation through hallways mirrored on both sides of the service core within each apartment. As in the traditional Queenslander, these hallways extend through the building and lead to a generous terrace. It is a flexible transitional space between interior and exterior, which is positioned to optimize the building’s aspect – in this case, across the Brisbane River toward the city. Opposite the grand terrace, the hallways terminate in a media room, a multipurpose space with an oversized window framing the gardens that cascade down the building’s eastern facade. These displaced front gardens help strengthen the relationship of residents with the outdoors, despite the elevation, and assist in filtering the city air – particularly from the adjacent Main Street.

This is the first implementation in Brisbane of a “vertical forest,” a concept introduced to the architectural scene by the Bosco Verticale project in Milan, by Stefano Boeri Architetti. This green spatial device has become a signature feature of tropical living, especially in Singapore, whose ubiquitous sky gardens have directly inspired another Brisbane project, 443 Queen Street by Architectus and WOHA, currently under construction. Beyond vague allusions to tropical architecture though, the brave – economically and structurally – addition of the green strip on Walan’s facade also reminds us that Brisbane has the smallest amount of open space per resident among Australia’s capital cities, and cautions that urban densification cannot ignore people’s basic aspirations and needs.

This latter warning points to the need for the profession and our city leaders to genuinely engage in the debate on density and its impact on our cities’ morphology, to look beyond simple questions of where to grow and how big. Easy access to open space for residents must be a more significant part of this conversation, as must the resulting changes to the urban landscape, its material nature and microclimatic qualities that impact on our collective health.

Increasing temperatures in urban centres, exacerbated in places like Brisbane by the local climate, require sensitive design responses. Walan, with its adaptable and articulated envelope, challenges the conventional highrise “sealed skin” facade, testing possibilities and demonstrating how design can deliver livability at scale. Despite some trade-offs – such as the contraction of the porch to a wrapping skin and the decorative vertical forest, inaccessible from the apartments and wisely managed by the body corporate – the spatial articulation and stratification pursued by Bureau Proberts in Walan clearly reflects the search for a new residential typology true to the site and the local building culture.

Walan joins a long list of projects on the peninsula wherein heritage buildings survive as functional extensions of new developments. The former residence of the Queensland Water Police at 11 Thornton Street, Thornclyffe at 162 Lambert Street, and the heritage-listed villa Leckhampton at 69 Shafston Avenue are all examples of this approach, which Walan manages to improve through careful preservation of the original building. The quality and extent of the adaptive reuse of heritage deserve collective reflection. The existing neighbourhood plan, over twenty years old, has repeatedly failed to protect the authenticity of the area and numerous breaches have been reported by the local community and accepted by the council. The new draft plan aims to reinforce building height and heritage controls while promoting the creative use of space underneath the bridge through rezoning and mixed-use development along Main Street. However, it fails to cite high-quality affordable housing and increased public parkland to replace the rapidly disappearing backyards so dear to Brisbanites.

While Walan is a successful top-end residential building, perhaps its real potential lies in its ability to show the value of investing in creative design solutions. The key design features that have ensured Walan’s success could be implemented in more affordable developments across Brisbane, making a real impact and giving the city a smart and sustainable future.

— Paola Leardini is an academic, designer and ESD consultant. She has taught in tertiary institutions in Italy, Switzerland, Germany, New Zealand and Australia, where she currently lectures in environmental and architectural design at the University of Queensland. Her work explores alternative design paths towards smart climate- and flood-resilient cities.

‘Queenslanders in the sky’: Walan 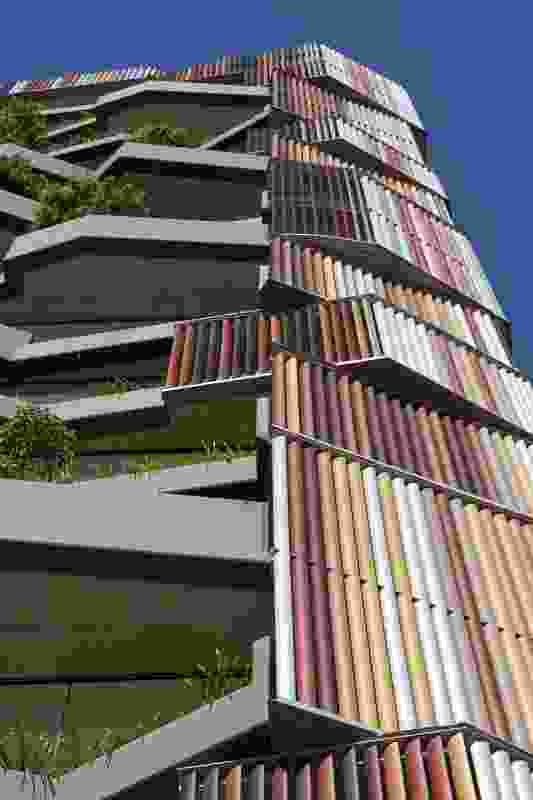 While Bureau Proberts’ design for Walan allows a high degree of visual connection to the outside world, views are filtered by carefully oriented vertical louvres. 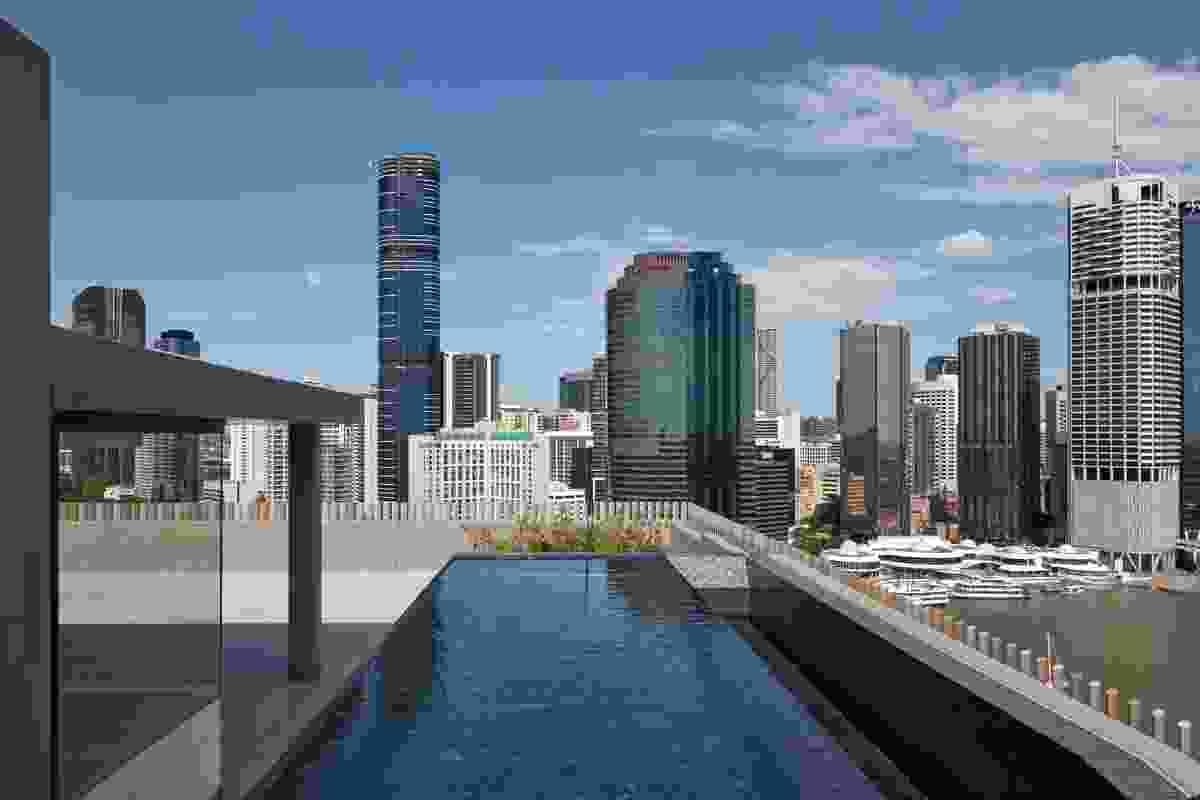 Each apartment occupies an entire floor and all rooms open to a verandah edge, as in a traditional Queenslander. 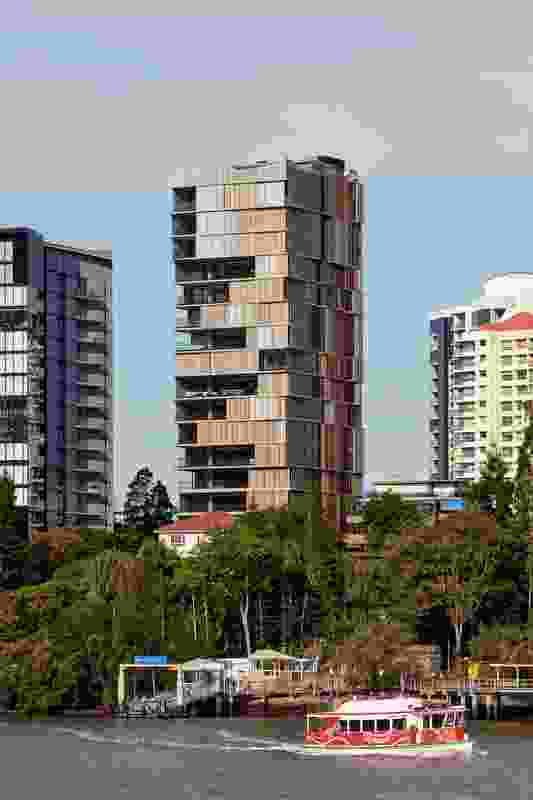 From across the river, Walan looks like a future archaeological remain, unusual yet rooted in the landscape. 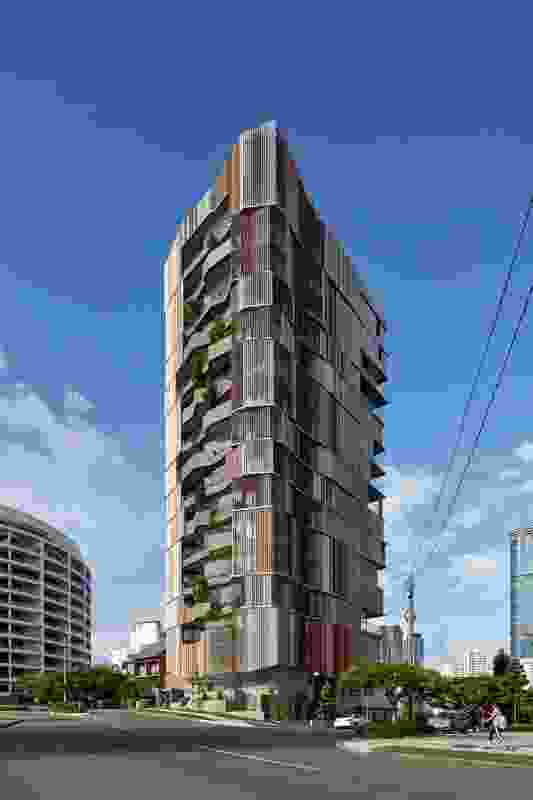 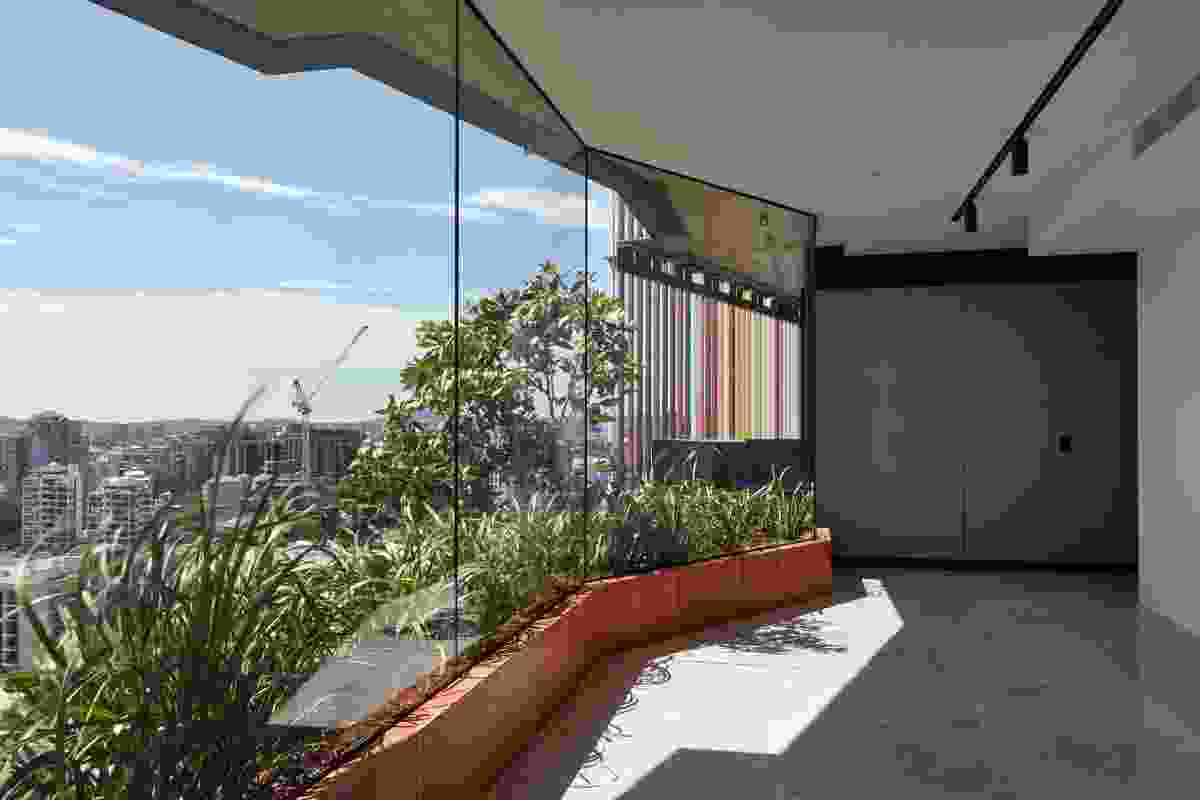 Hallways that extend through the building are positioned to optimize views across the Brisbane River to the city. 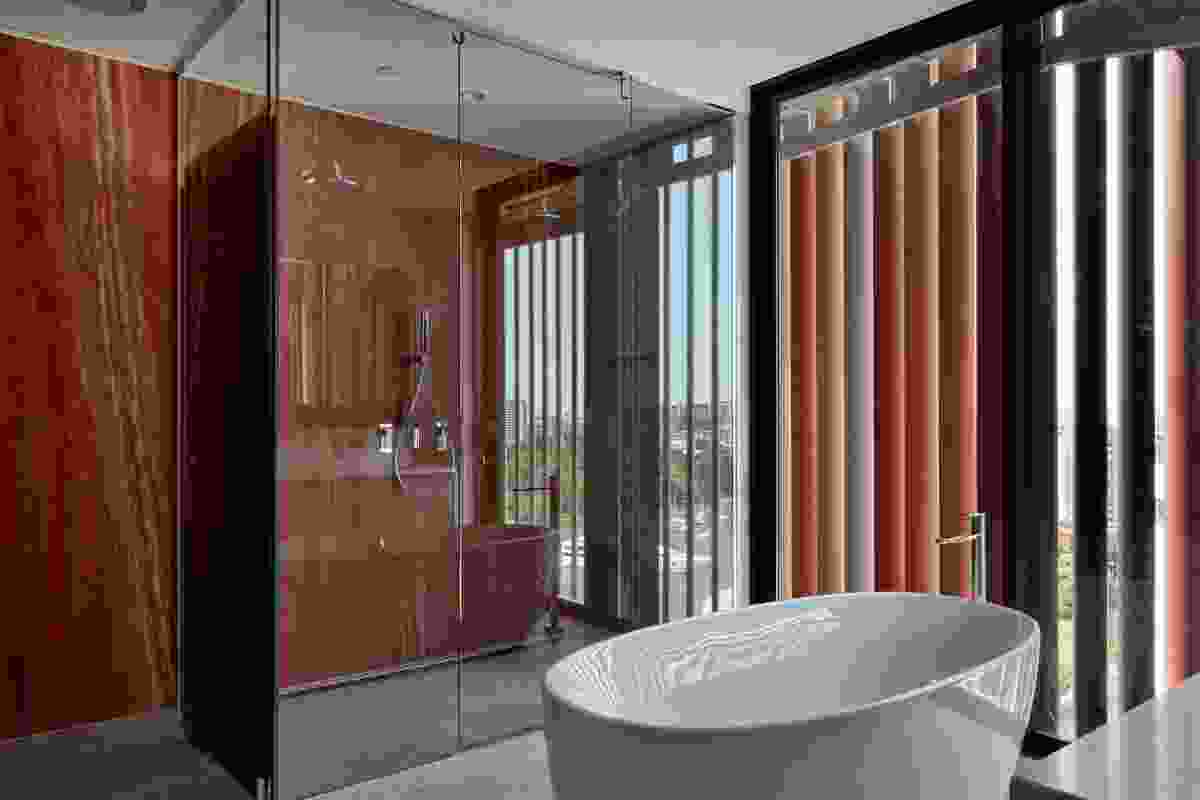 Internal materials, including timber and stone, reference the adjacent Kangaroo Point Cliffs while screens maintain privacy in bedrooms and bathrooms.