John Wardle Architects has won a design competition for the University of Melbourne’s $105 million new Melbourne Conservatorium of Music (MCM).

The building will be a new addition to the Melbourne’s arts precinct in Southbank. Situated at 33 Sturt Street, it will be adjacent to the Melbourne Recital Centre designed by 2016 Gold Medallists ARM Architecture. The site, currently a car park, is leased from the Victorian government, which has also provided a $3-million grant to the project.

The building will include a 443-seat cantilevering auditorium, a 200-seat ground-floor studio and a range of rehearsal studios and spaces for teaching, performing, recording and research. It has been designed to be the “inverse” of the current MCM facility on Royal Parade at the University of Melbourne’s Parkville campus.

Architect John Wardle describes the conservatorium typology as a “box-in-box construction of cellular and separated spaces that are tuned to the requirements of very individual rehearsal and tuition.”

Parts of the precast concrete panel facade will “lift, tilt and hinge open to generously exhibit the character of [the building’s] programs,” Wardle said. The building will feature a large oculus window, which will allow views into the ground-floor studio.

The design also includes a public square or pocket park, which will contribute to a community space plan outlined in the Melbourne Arts Precinct Blueprint. The blueprint, released by Arts Victoria in February 2014, found the precinct lacked street life and was dominated by “inward-looking institutions” and “inactive street frontages.”

John Wardle Architects contributed to the urban design framework of the precinct, which identified Sturt Street as a “destination” that could be “reimagined as an arts spine,” to complement Melbourne’s civic spine (Swanston Street/St Kilda Road). “Sturt Street could be a sought-after place to be known for its […] street music, street food, outdoor furniture, performances and performers,” the blueprint states.

Wardle said the pocket park will connect the “arts spine” to the heart of the Victorian College of the Arts (VCA) campus. “From Sturt Street now, sight lines are drawn right across through this park into the centre of the VCA campus. The activities that often can be internalized will spill out into this linear park and the public realm.”

The cantilevering auditorium will also create an additional space – a rotunda that will act as a theatre stage and audience setting. “This rotunda sits at the very edge of the pocket park to create the most active space – scripted by the students, we hope – right on the street front,” Wardle said.

Construction is set to begin in 2017 and the building will open in 2019. MCM is one of Australia’s oldest tertiary music institutions and counts Dame Nellie Melba among its alumni.

The University of Melbourne also plans to redevelop the nearby former Police Stables in Dodds Street into a new visual arts wing for the VCA, as well as a new contemporary art museum on the corner of Southbank Boulevard and Dodds Street.

“The MCM is recognized as a key contributor in the Melbourne Arts Precinct,” said Professor Barry Conyngham, Dean of the Faculty of VCA and MCM. The new MCM will bring together the faculty’s two existing campuses in Parkville and Southbank. “The new Conservatorium […] presents a once-in-a-generation opportunity to consolidate the MCM teaching and research facilities and student experience in the heart of the local arts industry, including close proximity to the Melbourne Recital Centre, Australian Ballet, Arts Centre and Melbourne Theatre Company, along with approximately 20 other arts organizations in the vicinity,” Conyngham continued.

“What I think we’ve brought to [the MCM project] that we’ve learnt elsewhere is the fascination with every moment where the individual player becomes a member of the orchestra,” Wardle said. “The building hopefully will exemplify that.” 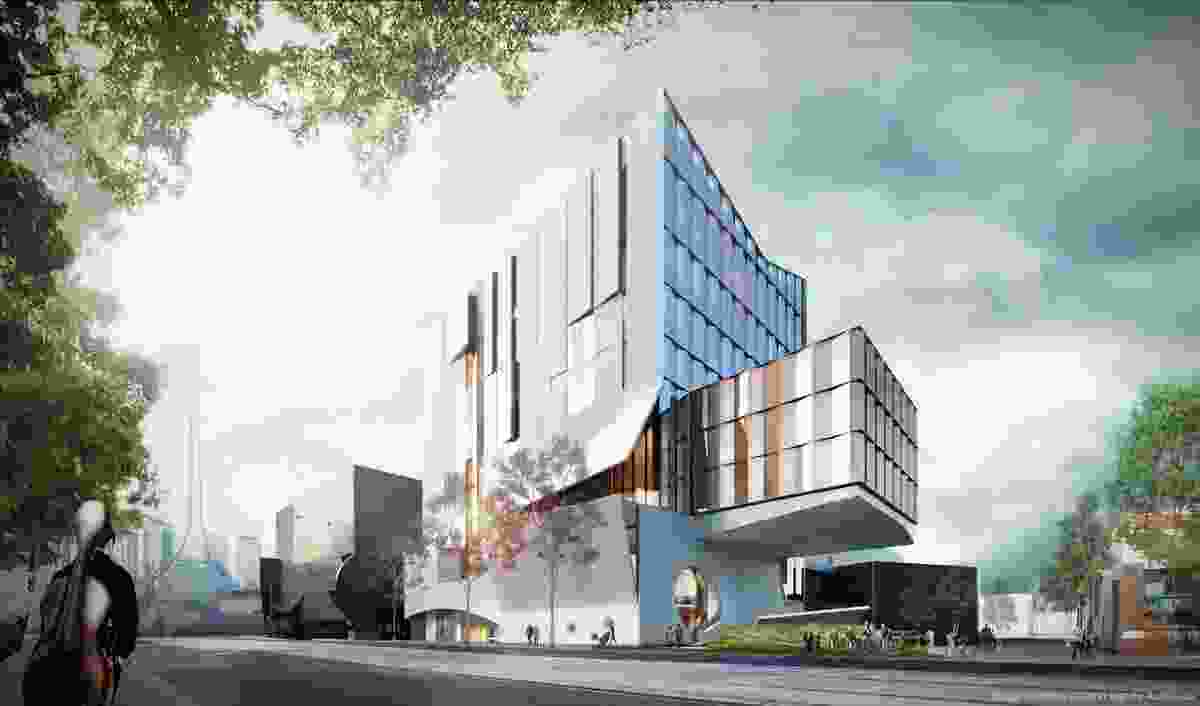 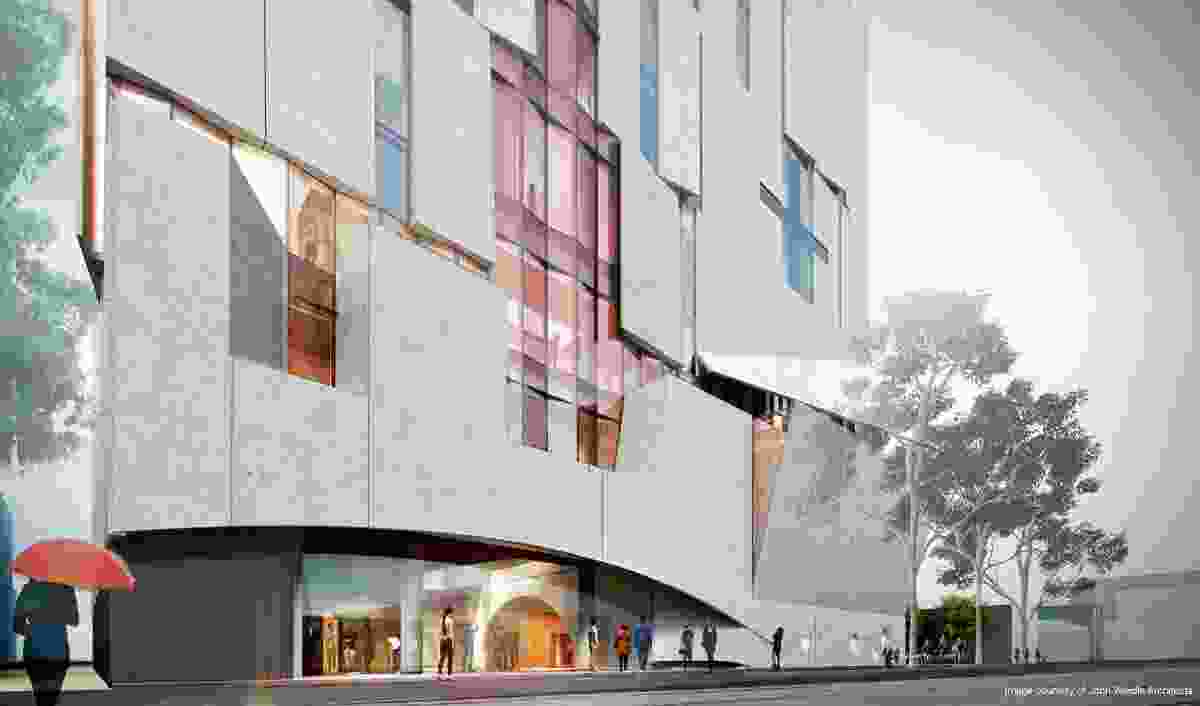 The facade of the Melbourne Conservatorium of Music designed by John Wardle Architects will lift, tilt and hinge open to allow the public glimpses into the building’s interior. 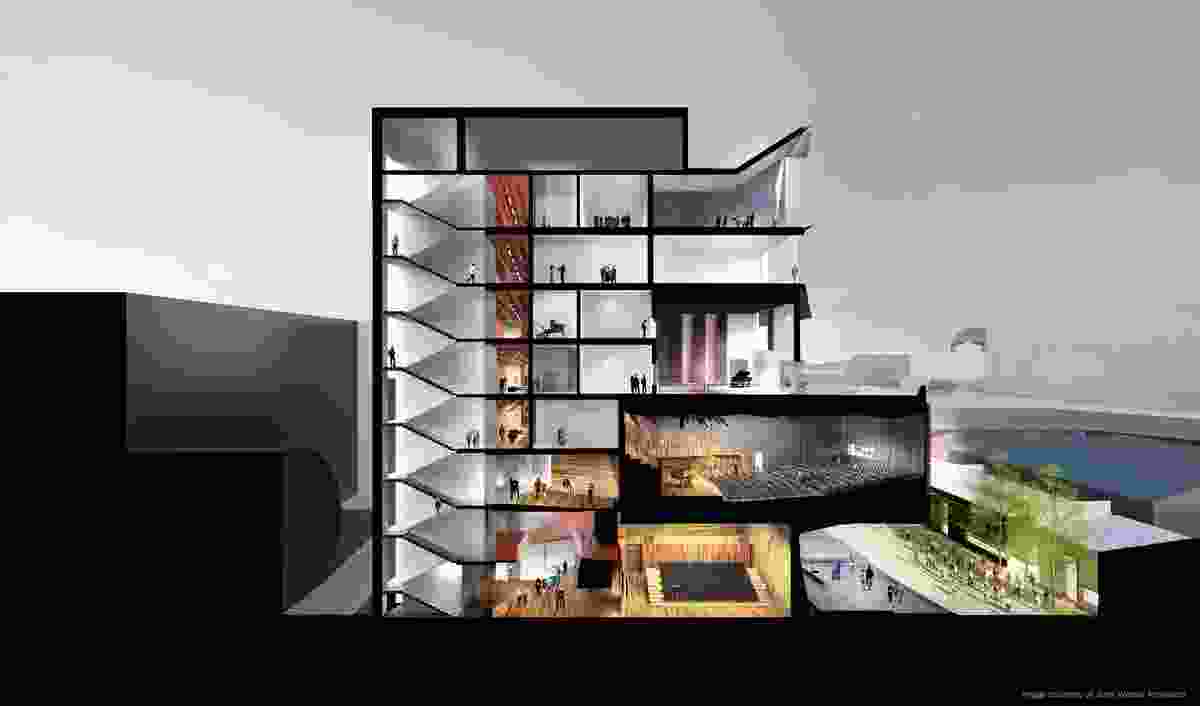 A section of the Melbourne Conservatorium of Music designed by John Wardle Architects. 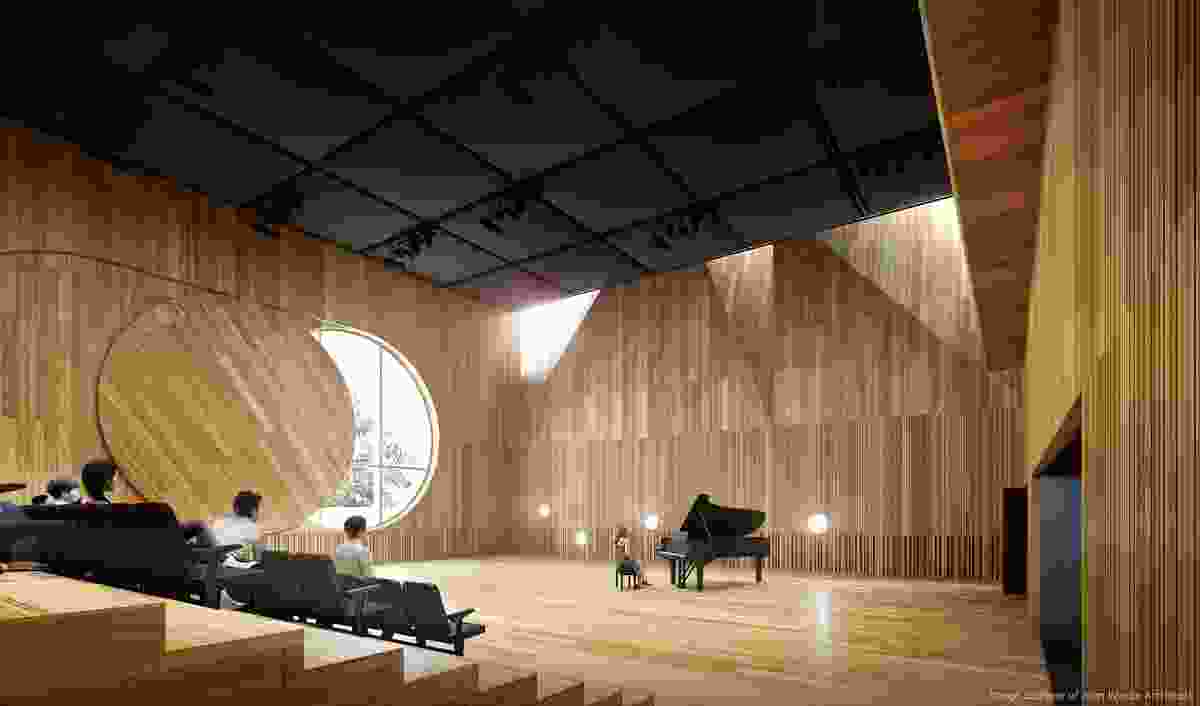 Interior of the ground floor studio in the Melbourne Conservatorium of Music designed by John Wardle Architects.