View east from Lake Burragorang. The visitor centre sits above the auxiliary spillway.

Slotted into a narrow valley near the edge of the Blue Mountains, Warragamba Dam holds back a long, deep lake that supplies around 80 percent of Sydney’s water. The dam catchment extends over nine thousand square kilometres, with water eventually draining to the lake, where it is held or filtered through the dam wall. The dam itself is a literally massive structure, with an array of appropriately huge devices for controlling and filtering the flow of water. Visiting the dam is one opportunity to get a glimpse of part of the vast landscape system that is harnessed to supply water to a city of over four million people, and Haviland Park was created on the site of the original construction works after the dam was built to allow people to experience the drama of the enormous structure and the beauty of the forested surroundings.

Built in the 1950s, Warragamba Dam was designed to cope with the effects of predicted floods. When the risk of extreme flood in the catchment was recalculated, it became apparent that additional flood protection measures were needed to cope with even bigger flood risks and to meet current international dam safety standards. This resulted in the construction of a huge new auxiliary spillway adjacent to the dam between 1998 and 2002. More than half the width of the original dam, the spillway sweeps down a gigantic new cut through the sandstone ridge in order to allow floodwaters to bypass the dam wall, protecting it from excessive pressure and the risk of collapse. The construction of this major new infrastructural intervention has had the effect of severing the connection between park and dam. The recently completed visitor centre and the reorganization of the adjacent park were initiated by this dramatic change.

The visitor centre and masterplan for the Warragamba Dam were designed as a joint venture between Lahz Nimmo Architects and landscape architects Spackman Mossop and Michaels, and have evolved over the past decade. For a project with the relatively benign program of visitor facilities, catchment operation facilities and picnic grounds, it has been shaped by a number of potentially and actually destructive forces. Having been set in motion by the spillway, which was built to mitigate the risk of extreme flood, the subsequent organization of the visitor experience was influenced by the heightened security concerns following 9/11, which saw a widespread reassessment of public access to major infrastructure. The site was also affected by the 2001 bushfires, which destroyed buildings and vegetation. Subsequent rebuilding enabled a rationalization of program and circulation within the park, while acknowledging the form and historic significance of the original landscape design.

The visitor experience starts by driving past some of the original picnic ground facilities, now separated off into council ownership. These are the small, plain picnic shelters and seats, undemonstratively dispersed, typical of the 1960s and 70s. On entering Haviland Park, several new picnic structures come into view – large, open shelters with roofs at an uplifted angle and multiple tables and benches arranged spaciously beneath, their angled legs matching the leaning supports. These structures are arranged in clusters around open grassed areas, providing generously for large gatherings. Parking is dispersed through the site to accommodate individual cars at an easy distance from the shelters and toilet blocks, as well as corralling the many bus loads of visitors, particularly schoolchildren, who are brought to the site to see the dam and learn about the water system.

The elegant slatted wall and jutting roof of a large shed by the side of the road signals arrival at the lowest of the car parks, from which the visitor centre comes into view. From this vantage point the building is a simple, low, strong box with a protruding frame indicating the entrance. The eye is also drawn to a vivid green monster gadget, which turns out to be an old valve from the dam. Between the box and the giant valve the visitor is drawn down a long ramp, past a memorial to the workers who died building the dam, and out onto a gently curved viewing deck overlooking Lake Burragorang and Warragamba Dam. Both this deck and another slightly lower are edged with thin metal uprights, giving a sense of containment yet also openness to the landscape. The fineness of the detailing is picked up through the framed entry to the building and the roof cladding, and forms a counterpoint to the solidity of the main structure.

On entering the centre, the choices are to approach an information desk immediately opposite, turn left to a large open room with a wall of glass overlooking the dam and lake, or turn right to enter the interactive displays. The open-ended north-facing room is designed to accommodate a range of possible uses, including blackout for video projection, children’s education and activities, and simple resting and viewing. The west wall can also be opened up to the forecourt area, connecting it to the arrival ramp and viewing platforms.

The display sequence starts with a wall of monochrome photographs illustrating the different dams in the Sydney Catchment Authority’s control, and some changing information about their capacity and operation. The main display space is arranged around a large, central, touch-sensitive table, which contains moving drop-like information elements, each revealing new images and details when pressed. The central space is framed by layers of concentric walls, which contain a great variety of visual imagery and information about the dam’s construction and the management of the catchment and water supply system. While the visual material is very detailed and precise, there is a strange monotony about the sound effects that accompany some of these interactive exhibits. Playing simultaneously in the confined space, they create a cacophony that is somewhat overwhelming and seems at odds with the landscape character that they supposedly represent.

The size of the overall building is deceptive – from the park only the visitor centre is clearly visible, while the adjacent operations facilities building is concealed by a planted earth berm. Situated to the east of the visitor centre, this facility provides office and work spaces for staff working on the dam and the catchment, giving them a light and open workspace with an unhindered outlook over the dam and lake. Recently planted and flamboyantly mulched, the berm currently creates a striking red termination to the formal planted avenue that creates the main axis of the park. Once this planting grows to maturity it will create the visual effect of continuity with the forested slope in the distance, heightening the contrast with the gap to the view that opens up at the arrival ramp.

A further set of platforms and stairs to the right of the berm allows a slightly closer view of the dam and spillway. A wide pathway leading back up through the park is part of a cycle connection back to Warragamba township, and it goes past a series of large artefacts from the dam and its construction. They seem slightly lost in their current location. Many of these, including remnant core samples and chunks of the dam extracted in perilous circumstances, are remarkable in themselves and have fascinating stories, especially as they convey such a tangible sense of the hugeness and complexity of the dam project.

It is this sense of awe that can’t be experienced by visiting the dam via a visitor centre. The arrival is thoughtfully sequenced and the views are elegantly positioned and framed. The whole experience is certainly pleasant but ultimately passive. The constraints on the project mean that information and interpretation have had to substitute for bodily experience of the colossal scale of the wall holding back nine thousand square kilometres’ worth of water. If there is a chance to reinstate this experience in the future, it would be a significant contribution to the project and to the heritage value of this landscape. 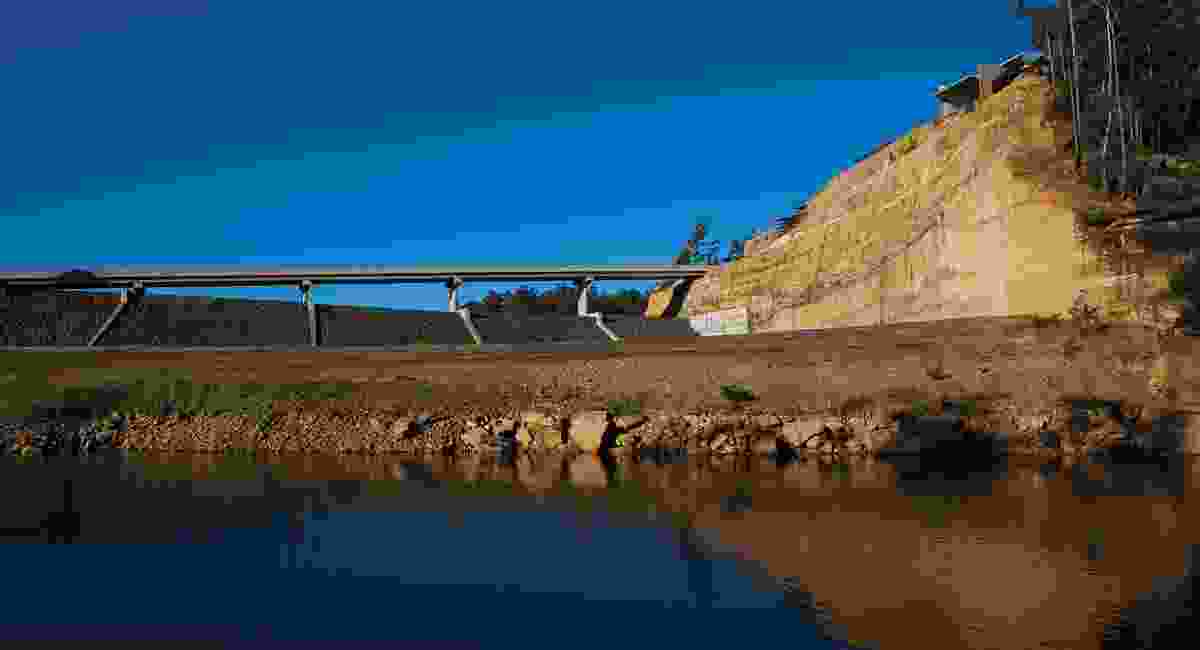 View east from Lake Burragorang. The visitor centre sits above the auxiliary spillway. 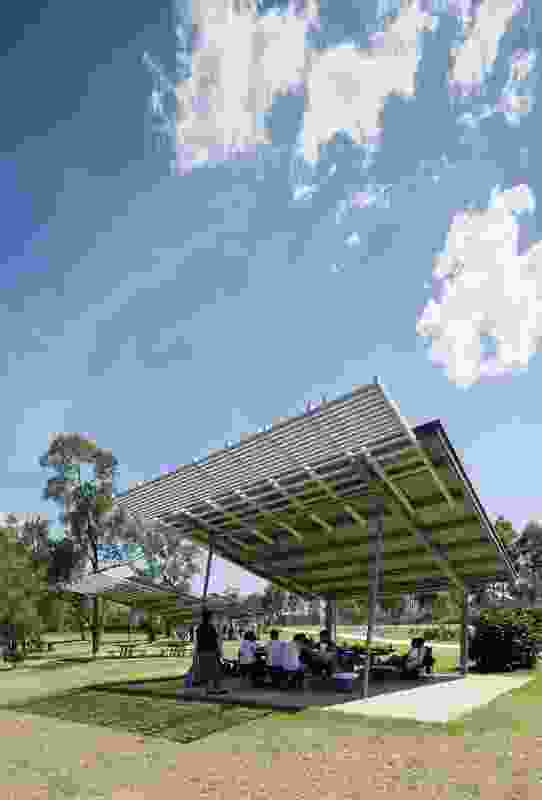 Open picnic structures encourage visitors to use the park facilities alongside the visitor centre. 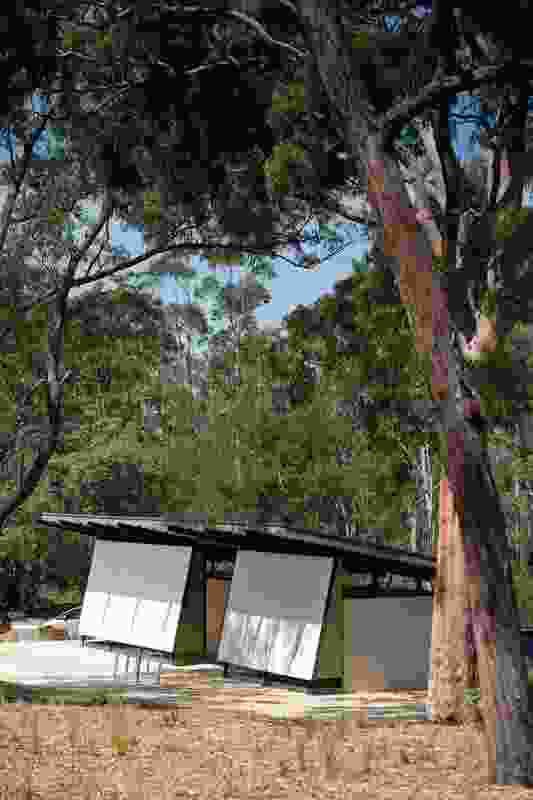 New public toilets in Haviland Park were part of the project’s masterplan. 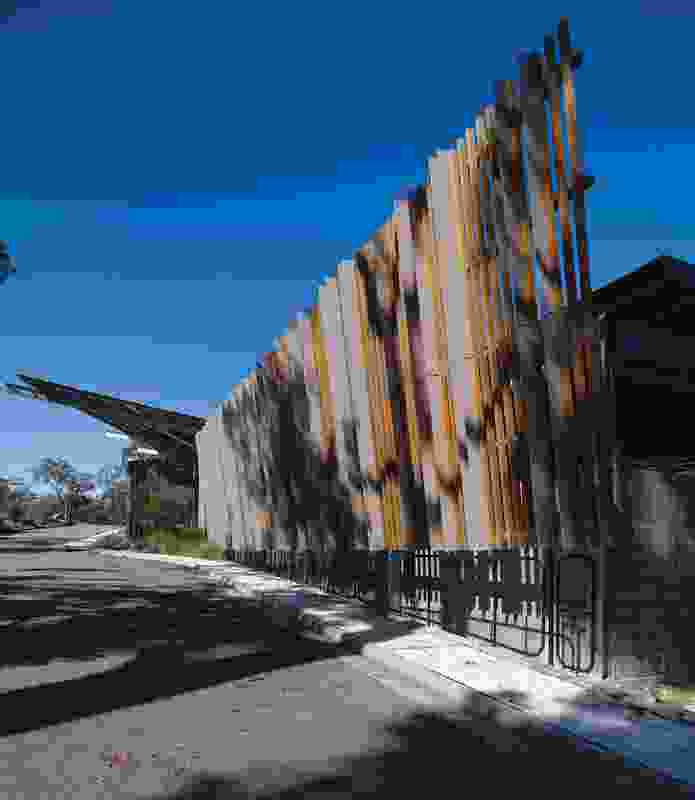 A large shed with a battened wall and jutting roof signals arrival at the lowest car park.

On arrival, the visitor centre appears as a simple, low box. The operations facilities are concealed behind a mulched berm. 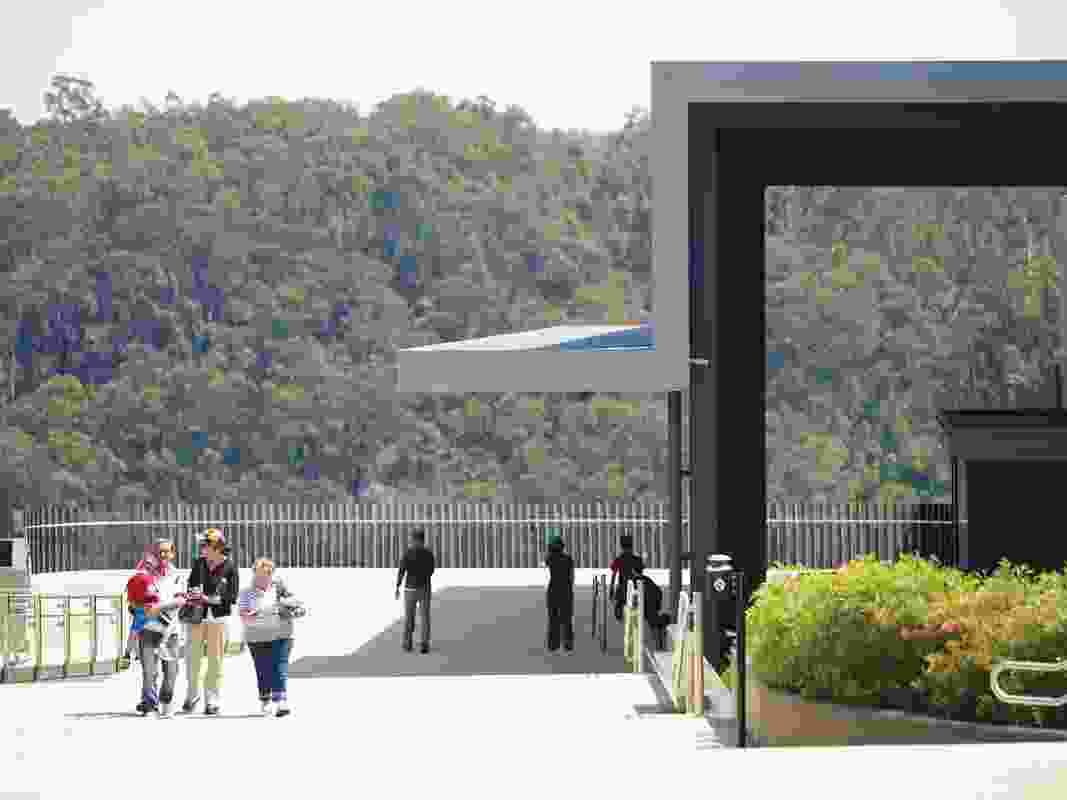 The entry to the visitor centre, with upper viewing platform beyond. 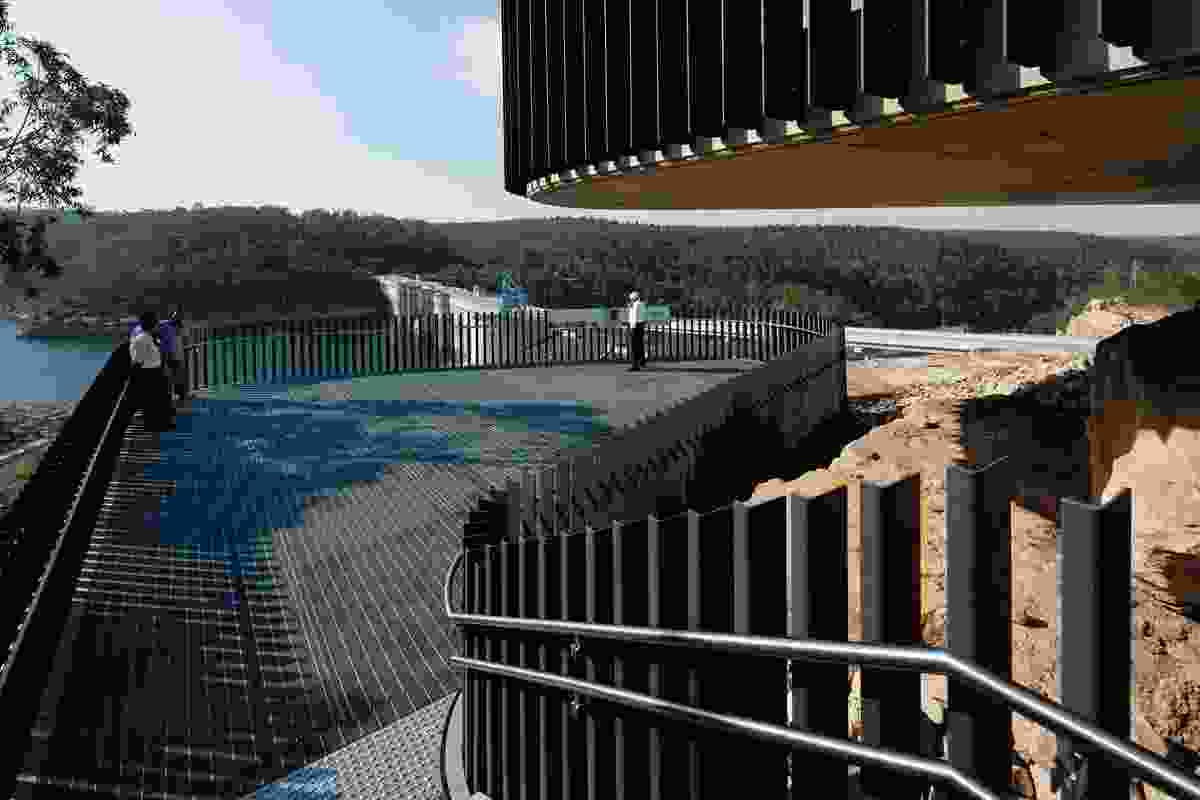 The lower viewing platform is enclosed by a balustrade of thin metal uprights. 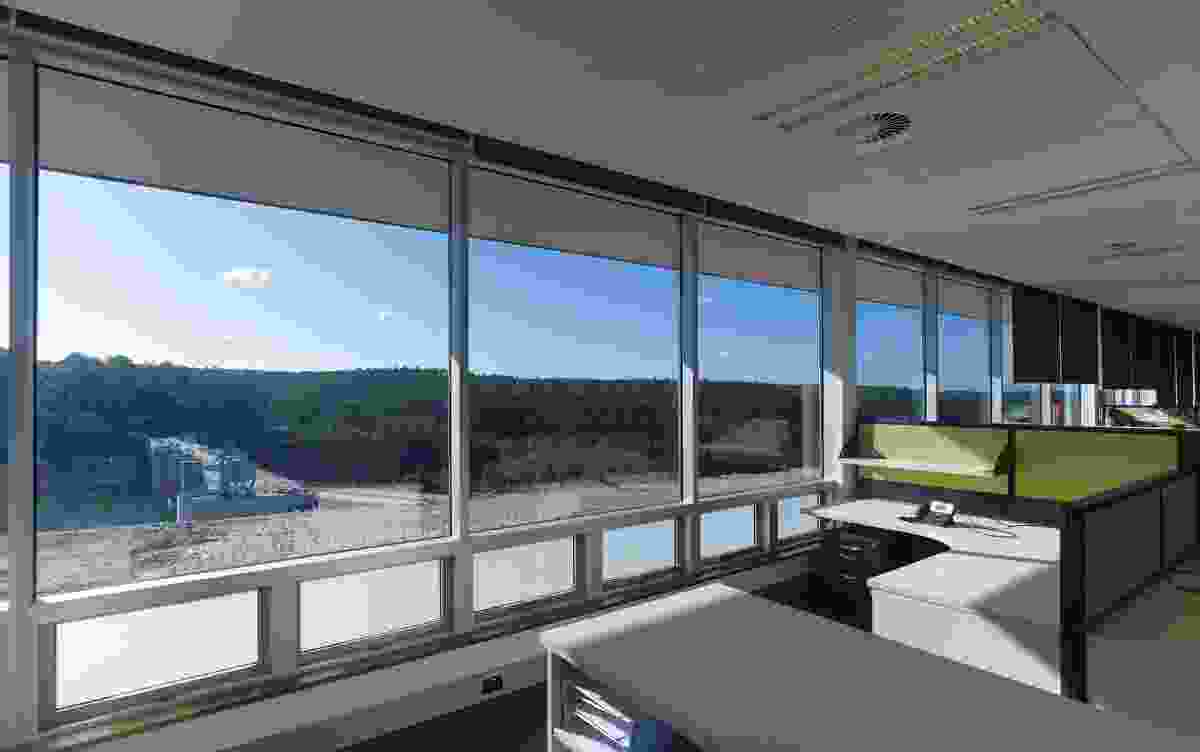 Office space is housed within the operations facilities adjacent to the visitor centre. 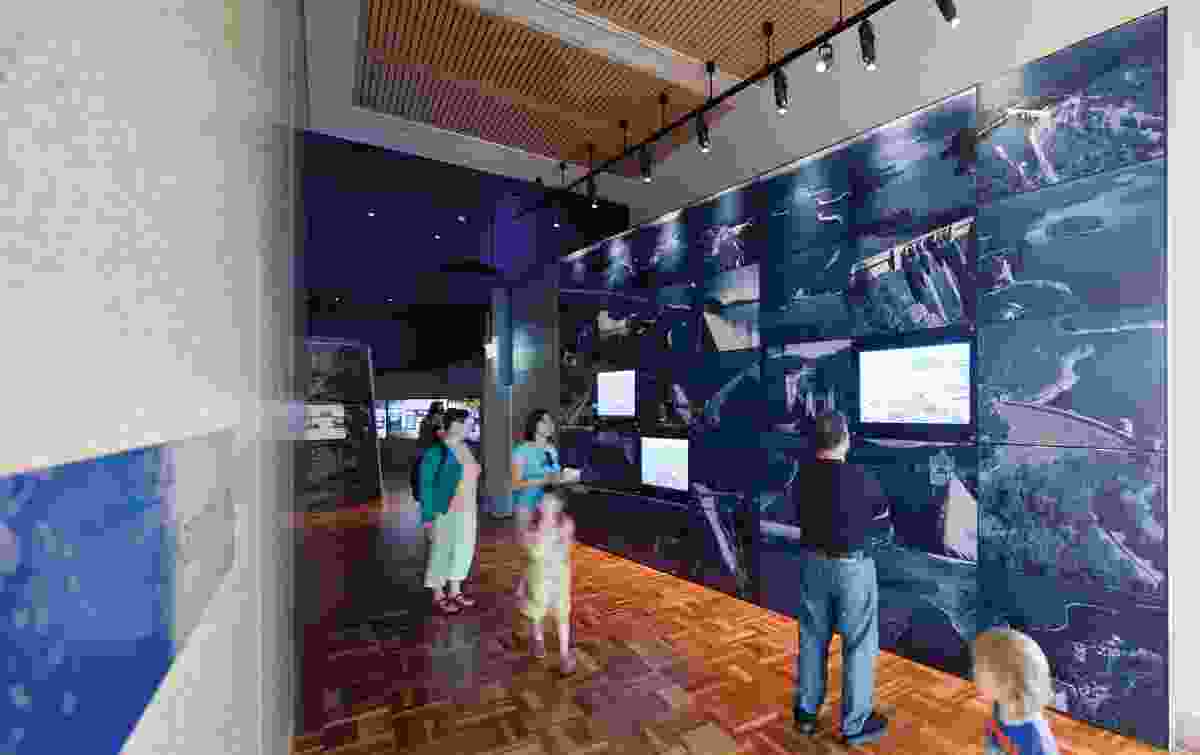 The exhibition space presents monochrome photos of the dams within Sydney’s catchment area. 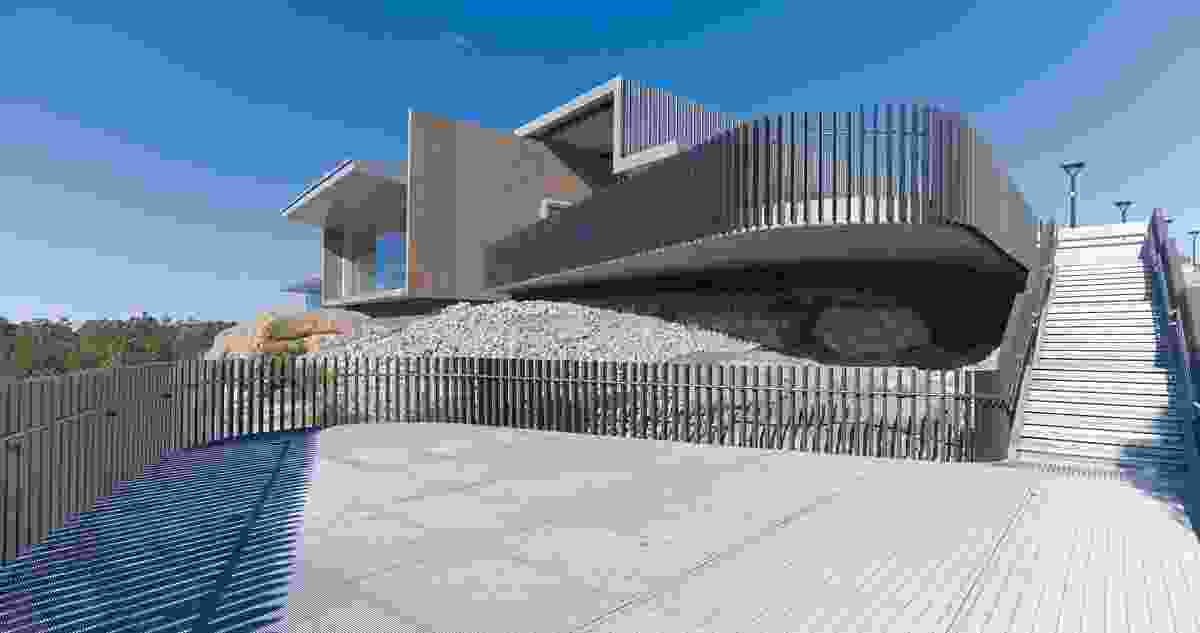 View east from the lower viewing platform back toward the visitor centre.

The western wall of the education space opens to the upper viewing platform.