Abel Feleke, a Master of Architecture student at the University of Western Australia, is the 2016 recipient of the Royal Institute of British Architects’ Norman Foster Travelling Scholarship. Feleke’s project, Weaving the Urban Fabric, investigates how social connections in slum neighbourhoods might inform future architectural interventions. Here, Feleke reports from Rio de Janeiro, the third stop on his four-city study tour of informal settlements in some of the world’s most densely populated urban areas.

A street view of Rocinha, an informal settlement in Rio de Janeiro and one of four visited as part of the Weaving the Urban Fabric study tour.

What lessons might be learnt from the intricate social networks that exist in informal settlements? How crucial are these connections to the survival of the communities whose lives play out in such settlements? Rio de Janeiro was the third destination in my study into the social organization of four informal “slum” settlements around the world, a project titled Weaving the Urban Fabric: Examining the Significance of Community. This journey is prompted by a desire to understand how the communal nature of informal settlements helps to preserve them, and to further investigate the dialogue that can, through architecture, exist between the physical and social development of communities. After spending six weeks in informal communities in India (Dharavi, Mumbai) and Southern China (Guangxi urban village, Shenzhen), I eagerly anticipated the inevitable cultural shift that awaited me beyond the bombardment of airports and customs counters.

All the information and data available cannot compare to the unique experience of being immersed in the streets, pace, noise and energy of Rio de Janeiro. Across the city, African, Latin, European and Indigenous influences are expressed not only in the built environment but also in the city’s art, culture, food and music. From the delicately crafted art deco buildings and shady streets of Rio to the brightly coloured residences of the favelas, it isn’t hard to form an emotional attachment to this eclectic city.

Over the course of three weeks, I researched the built and social environments that have shaped the diverse communities of Rocinha, often pegged as one of Brazil’s largest favelas. Engaging with organizations such as architecture firms Atelier Metropolitano and Inova Urbis, agency UN Habitat and research group Studio X Rio was invaluable, and being welcomed into the lives of some of Rocinha’s residents truly enriched my stay in Rio.

Rocinha, which translates to “little farm,” is perched on the hillside overlooking Rio’s zona sol (south zone) and world-famous Ipanema and Leblon beaches. Travelling daily into Rocinha is an unforgettable experience. Winding slowly along the coast road, the views looking out to the ocean are spectacular. Multistorey informal settlements and tightly winding streets can be seen etched into the hillside, occupying some of the city’s most desired land. After a short bus trip, the Passarela da Rocinha – a large winding concrete footbridge designed by Oscar Niemeyer – marks the entrance to Rocinha, stretching its arms to link the markets of the settlement with the community. On foot, the bridge serves as a stage from which the viewer can see the extent of the favela’s sprawl over the hill: a surreal image of dwelling upon dwelling, staggering up the hillside.

The entry to the favela, an area colloquially referred to as “the bottom of the hill,” is an intense hive of activity. Via Apia serves as one of the major arterial roads and access points to Rocinha and remains densely populated throughout the day as restaurants and vendors line the streets. The cosmopolitan neighbourhood is a popular communal meeting place, with many residents often passing through on their way to work and school. Tight passageways filled with a multitude of businesses lead off Via Apia, bustling networks of walkways that eventually make their way to the incredibly dense housing areas. Above these passageways are similarly dense networks of electricity wires.

Each day, on the steep walk up from Via Apia, the sight of heavily armed military policemen became as familiar as the unmistakable rhythm of Baile Funk music. Rocinha, like many favelas, has a history of being associated with the South American drug trade, and the presence of the UPP (Pacifying Police Units) is a reminder of the infamous drug gangs that once controlled the local area. The advice of the local community quickly becomes an invaluable tool when you are navigating and working in such informal settlements.

In this incredibly dense urban environment, there is a constant fluidity. The built environment exists as a reaction to the day-to-day requirements of the community.

In this incredibly dense urban environment, there is a constant fluidity. The built environment exists as a reaction to the day-to-day requirements of the community. New floors are added to buildings as families either expand or look to increase household income by renting out space. Throughout Rocinha, family homes occupy small lots of land and expand vertically in order to facilitate intergenerational living. In many cases, a building’s third storey is inhabited by the children and grandchildren of the same men who, decades earlier, constructed the ground floor. This spontaneous growth exists as a tangible expression of the social networks that exist to sustain the community’s survival. And this reactionary growth is not restricted to private residences; a similar response also occurs in public areas. No area remains stagnant.

Through visits to houses as well as construction and architecture firms operating inside Rocinha, I was fortunate to meet with residents in both pacified and unpacified areas of the community. Conversations revealed that the often crude structural interventions exist as a response to traditions of living: individuals build incrementally over time in order to manage changes in income and lifestyle. In the same sense, successful architectural interventions in the community are woven into the existing urban fabric to allow for flexibility of use over time. Construction techniques make the most of skills and materials that are readily and locally available.

Study in Rocinha has revealed how these rudimentary construction methods are intricately connected to the crucial social networks established by the favela’s residents. As journalist and author Kalpana Sharma writes in Rediscovering Dharavi: Stories from Asia’s largest slum (2000), “a slum is not a chaotic collection of structures; it is a dynamic collection of individuals who have figured out how to survive in the most adverse of circumstances.” What is in fact revealed within this “crude” built environment is a complex system of living that relies heavily on communal engagement and interdependency among Rocinha’s citizens.

Weaving the Urban Fabric: Examining the Significance of Community, by UWA Master of Architecture student Abel Feleke, was the winner of the 2016 Royal Institute of British Architects’ Norman Foster Travelling Scholarship. Learn more about the project at weavingtheurbanfabric.com 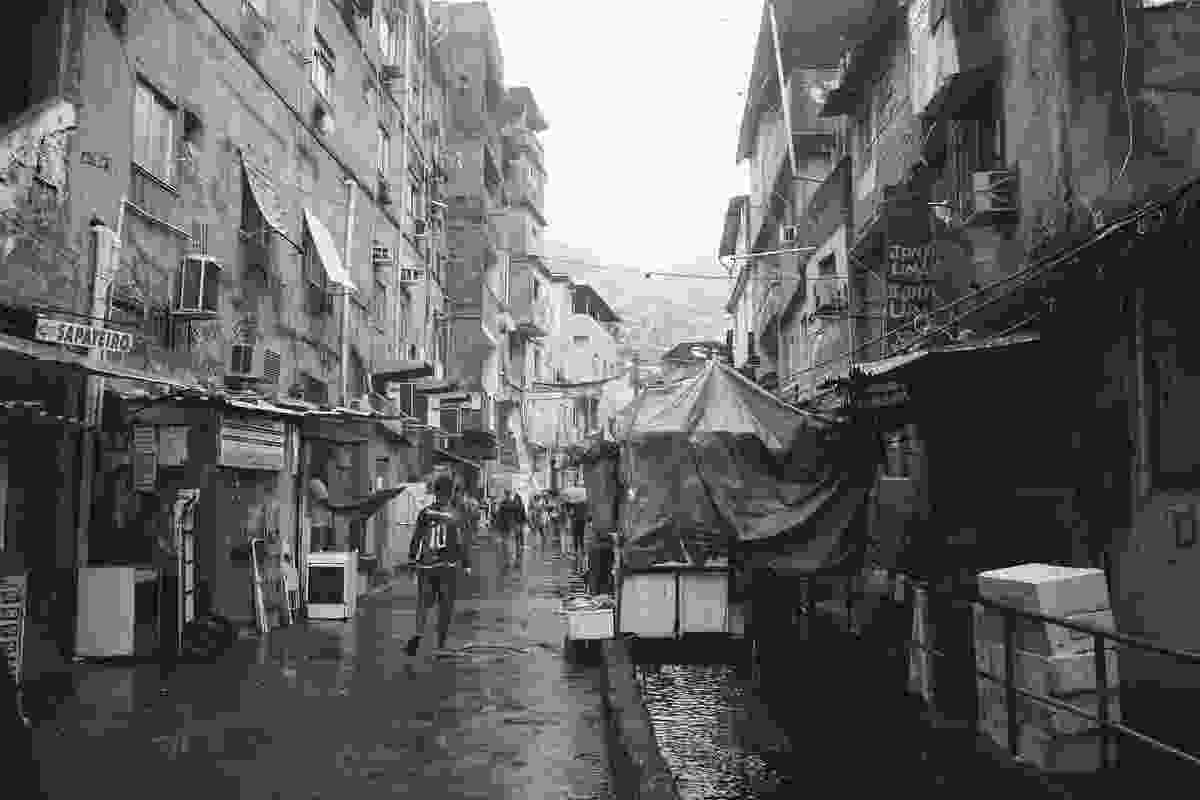 A street view of Rocinha, an informal settlement in Rio de Janeiro and one of four visited as part of the Weaving the Urban Fabric study tour. 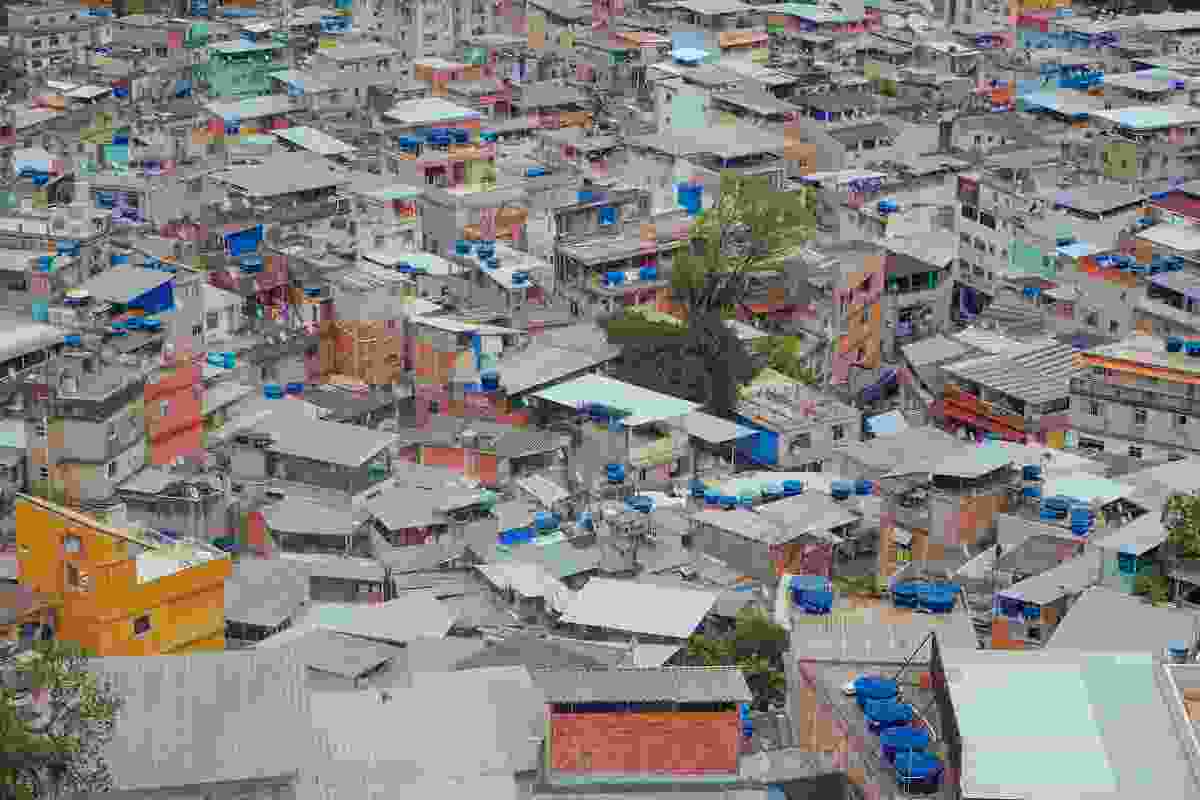 Looking out over the rooftops of Rocinha, one of Brazil’s largest and most densely populated favelas. 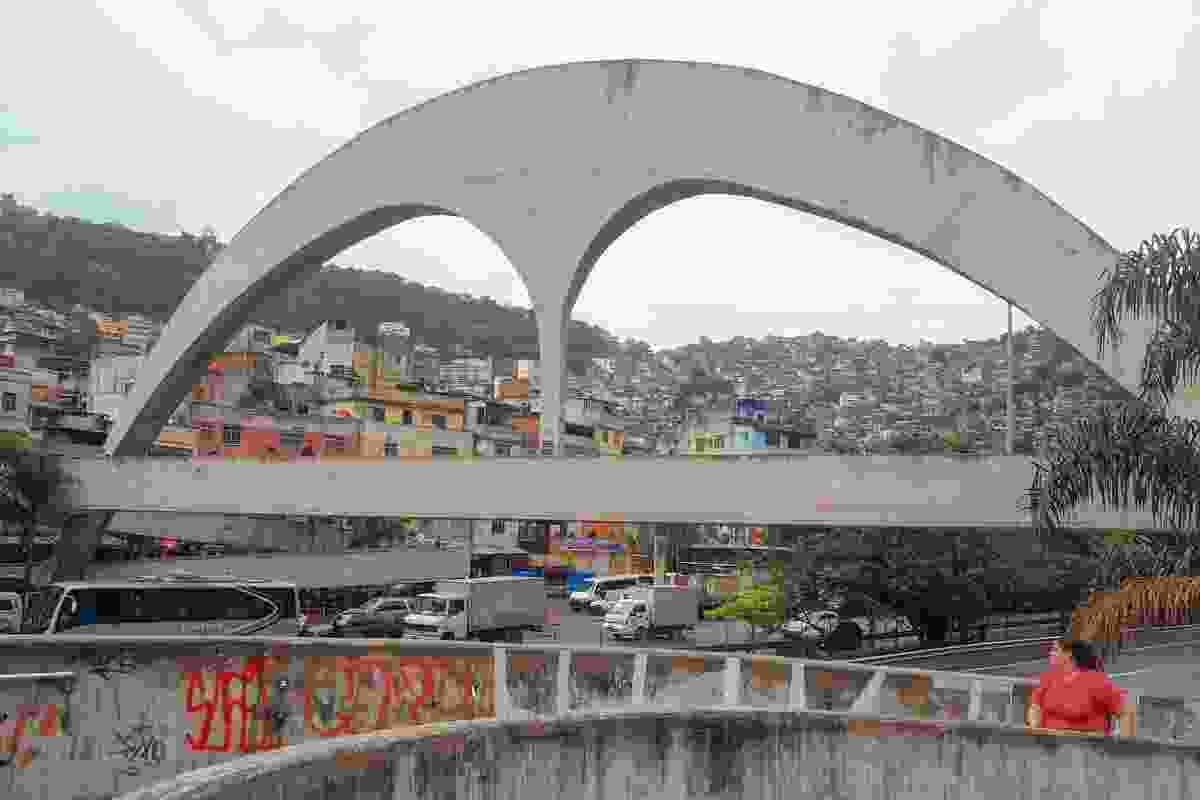 A sweeping concrete footbridge designed by Oscar Niemeyer marks the entry to Rocinha. 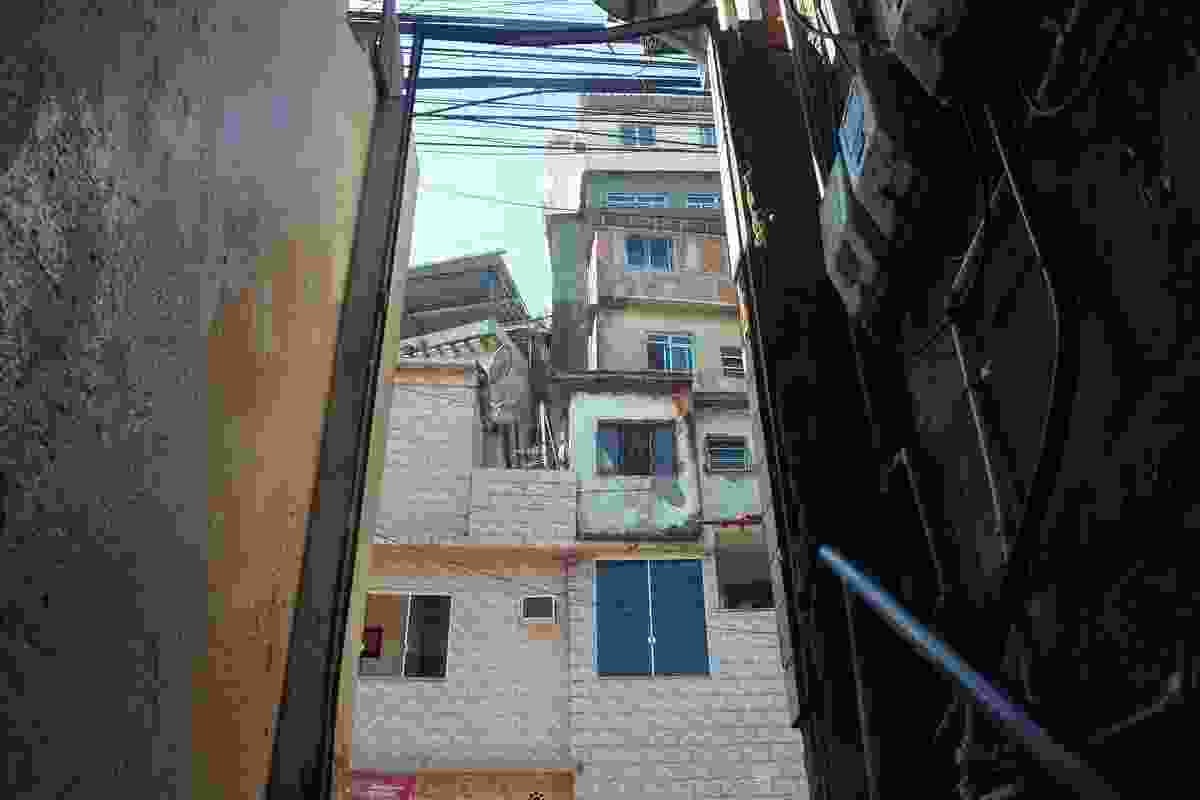 The built fabric of Rocinha is a physical embodiment of the day-to-day requirements of the community. New levels are added to buildings as they are needed. 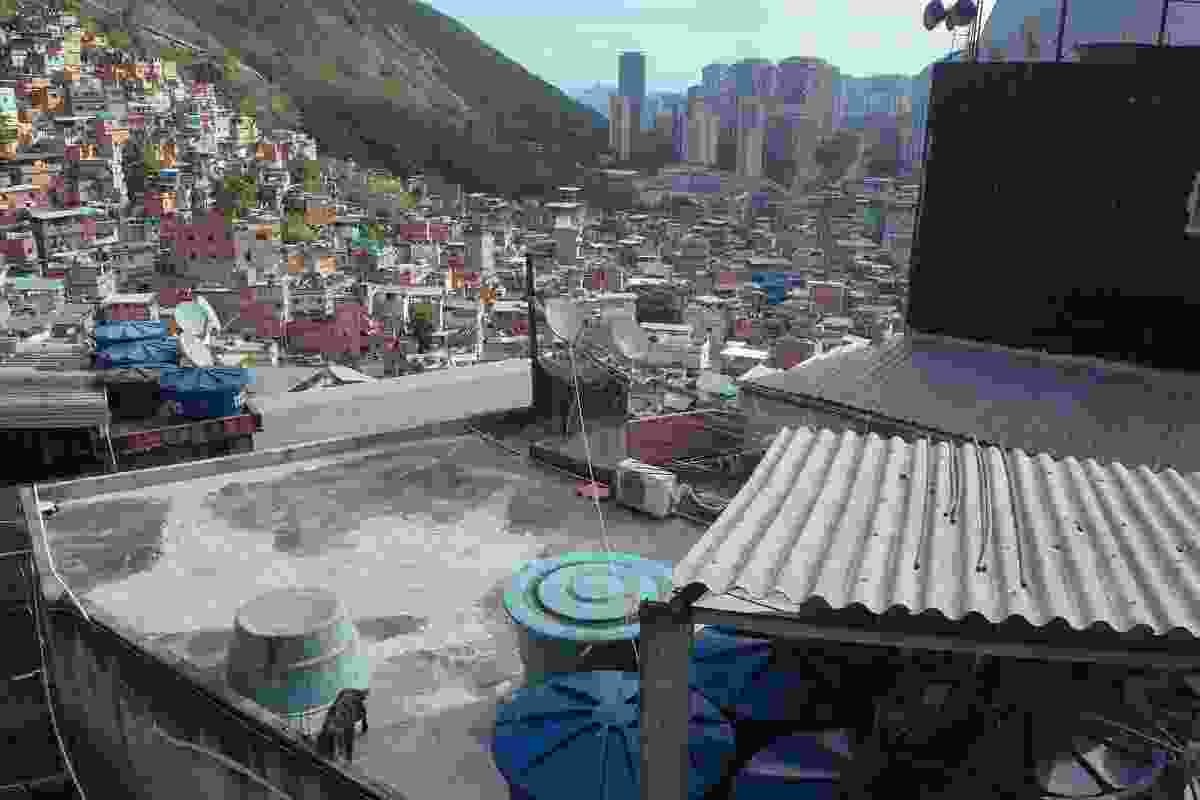 Visiting homes in an unpacified area of Rocinha, where the UPP (military police) have not yet established a presence.