Imaginative elements that all do more than one thing allow the careful but confident transformation of a tiny worker’s cottage into a contemporary family home.

The new pavilion has the charm of a child’s drawing of a house. Photograph: Christopher Frederick Jones.

If you follow social media for architectural inspiration this house by Vokes and Peters may seem familiar. From April 2012 until May 2014, Caroline Novinc, mother of four young boys, publicly shared the process of house-building on her blog West End Cottage: Worker’s Cottage Renovation. The outcome is an informative record of insight into the process of building a family home with an architect. And although the blogged story seems to have concluded, life goes on in the micro-chronicles of Instagram to the two-thousand-plus followers.

In an interesting story-based parallel, the architects themselves employ a process that they call the “narrative brief,” through which they enquire deeply into client expectations. This story sharing provides the imaginative foundation from which the architects can refine and detail an elegant economy of space in solutions that meet the client’s requirements. Architect Aaron Peters explains how using richer descriptions of life in a home can identify the redundancies in a schedule of rooms: “Sitting room, media room and rumpus room might all actually mean the same room and require the expense of only one well-designed space rather than four separate and under-utilized spaces.”

There is justifiable delight to be found in Vokes and Peters’s distinctive and maturing language of building – in the inventive spatial relationships, refined material combinations, politely expressive motifs, memorable exploits in black and white, and attentive bravura with brickwork. In the way that ideas bloom in time and across projects, this design has kin in earlier work. Most obviously it is reminiscent of the Four-Room Cottage, which was a touchstone for the clients of the West End Cottage. Both cottages exemplify how an astonishing economy of space can create an expansive experience of dwelling that feels much larger than its poised footprint.

The architects’ continuing affection for the cottage type is evident in the careful refiguring and expansion of space to achieve most with least. It was significant to both client and architect that the “public” living areas remain in the original cottage. With minimal alteration to the fabric, all but one of the former rooms has been repurposed.

Demolition of a lean-to at the rear of the building made way for two new rooms. The extended cottage steps down half a level to meet its complement in a brick plinth. Located on flat land not far from the Brisbane River, the plinth is elevated above projected flood levels, forming an open terrace and the base for a pavilion for the boys. A breathing interval between enclosed forms, the brick court strikes up a chimneyed gable wall against the sky and steps down to lap the green of the lawn. The material receptivity of the surfaces, expressed in four blends of brick cast, sends northern light into the south-facing spaces of the house.

Like lines on an invisible musical stave, axes are drawn through the whole composition to build connection within the cottage and beyond to the pavilion and garden. The cottage-typical central axis is maintained, terminating in the new terrace wall. Behind the single skin of the main bedroom wall, a more intimate axial narrowing reaches through the parents’ suite into the sky-lit bathroom (which occupies the former location of the kitchen).

Another alignment flows from front to back through an enfilade of public rooms and scullery. The sitting room is all repose. A banquette reclines the width of the room beneath the window to the street. Fine joinery fills the eastern wall, contriving a new sense of depth for the thin cottage construction.

The habitual focus of family life, the dine-in kitchen, is central. Diagonal to the television room and Caroline’s writing alcove, it is the ideal hub for family multi-tasking. Partnering the “show” space is the scullery, which extends southwards to a beautifully formed threshold to the brick terrace. This little volume warrants attention for cherishing the simple pleasure of inhabiting the in-between, of sitting on the edge of things and nostalgia for “the back stairs.” Painted black, the threshold participates in relationship to the new pavilion set on the plinth, figuratively interlocking the two elements at this crossing.

The boys’ pavilion has the charm of a child’s drawing and is joined to the main house by the spine of an amenities corridor. The design of the sleeping arrangements took some resolution, concluding with the idea that sharing would enable a more generous arrangement. The sense of space and connection in this mini-house world is wonderful. The boys’ rooms are lofty and light-filled, ceilings coincident with the gable roof. It’s easy to imagine the flourishing of child-centred sociality here as boys play around the circuit into the garden, traversing the folly fragments of brick stairs and part walls that gently formalize the larger landscape.

From its beginning as a tiny worker’s cottage, now transformed into a contemporary home for a family of six, it’s remarkable that the finished footprint of enclosed space is so small (by any standard, not only the bloated preferences of today). Characteristic of Vokes and Peters is an architecture that works hard in the service of the lives it shelters and supports. In this home, space and form are distilled into a whole that is more than the sum of its parts, built from imaginatively expansive elements that invariably do (or enable) more than one thing. The West End Cottage is exemplary in this regard, a beautifully composed building vitalized with possibilities. 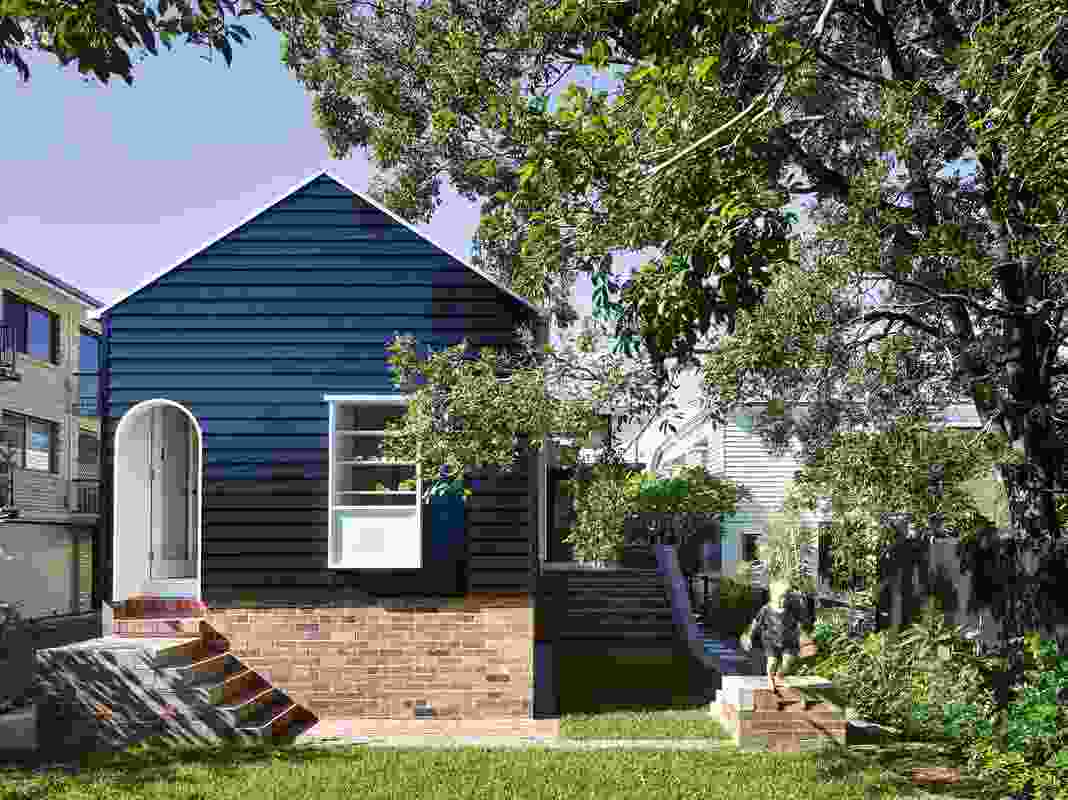 The new pavilion has the charm of a child’s drawing of a house. Photograph: Christopher Frederick Jones. 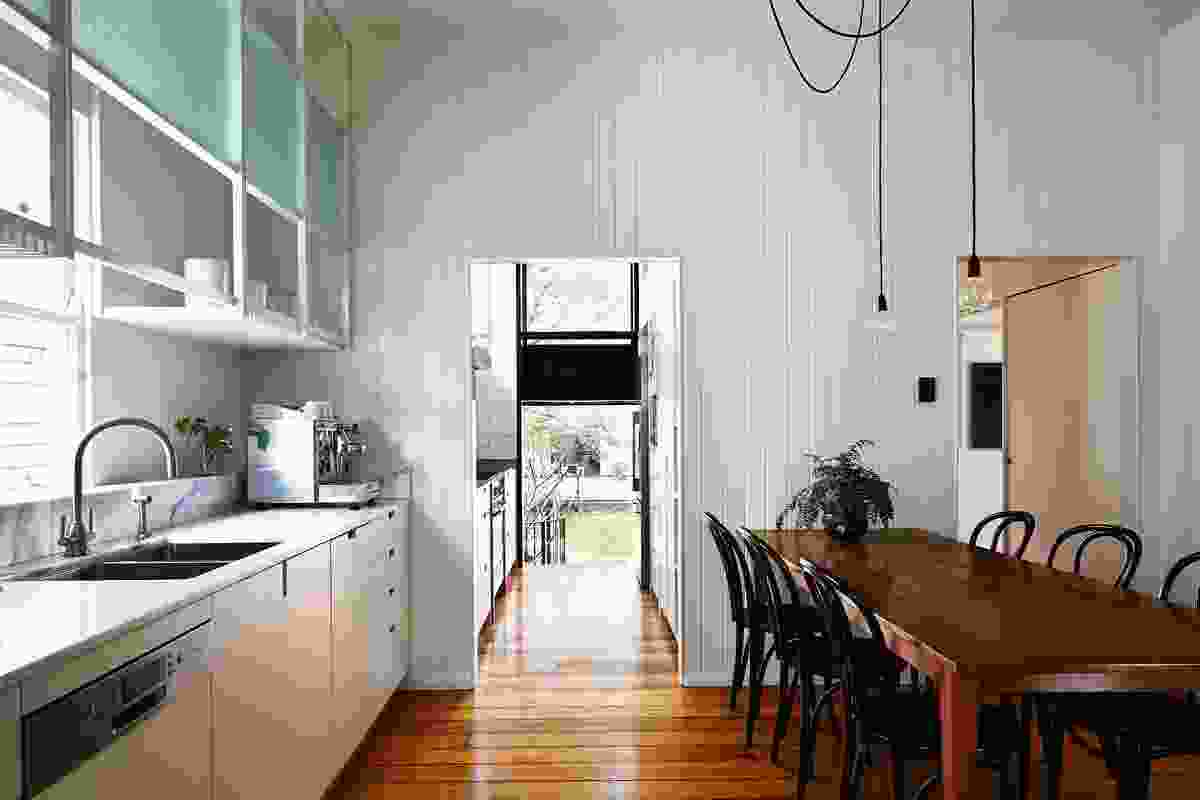 The dine-in kitchen, lit by plenty of daylight, is the hub of family life and serves as a flexible multi-tasking area. 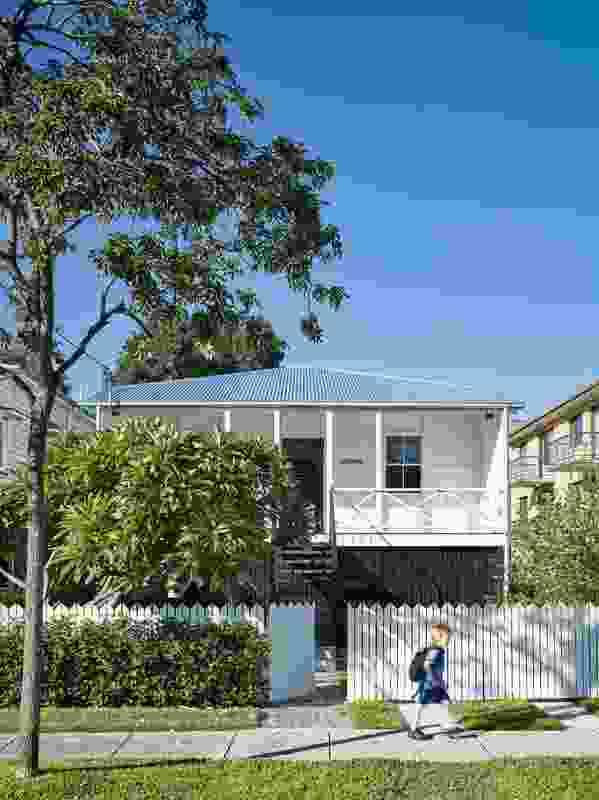 The black battening on the lower half of the cottage front references the new black pavilion to the rear. Photograph: Christopher Frederick Jones. 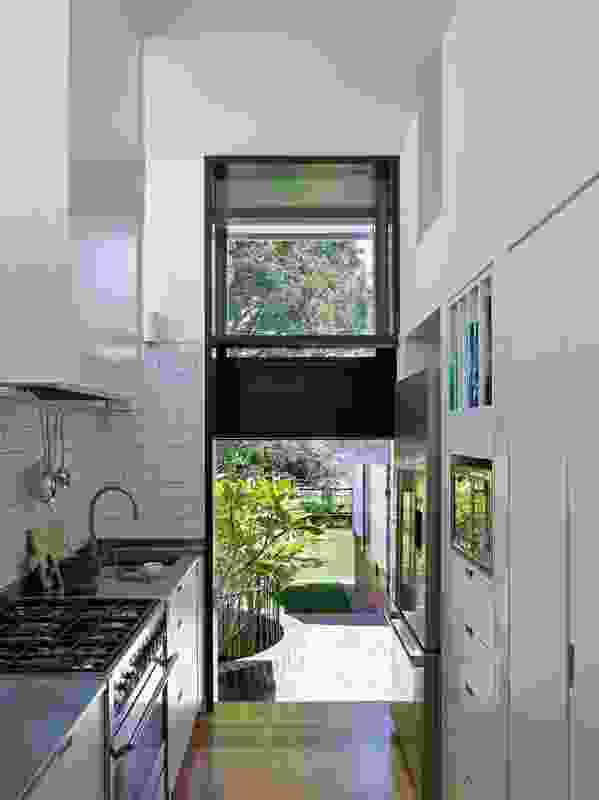 Beyond the scullery, the cottage steps down half a level, forming an open terrace and the base for a pavilion. 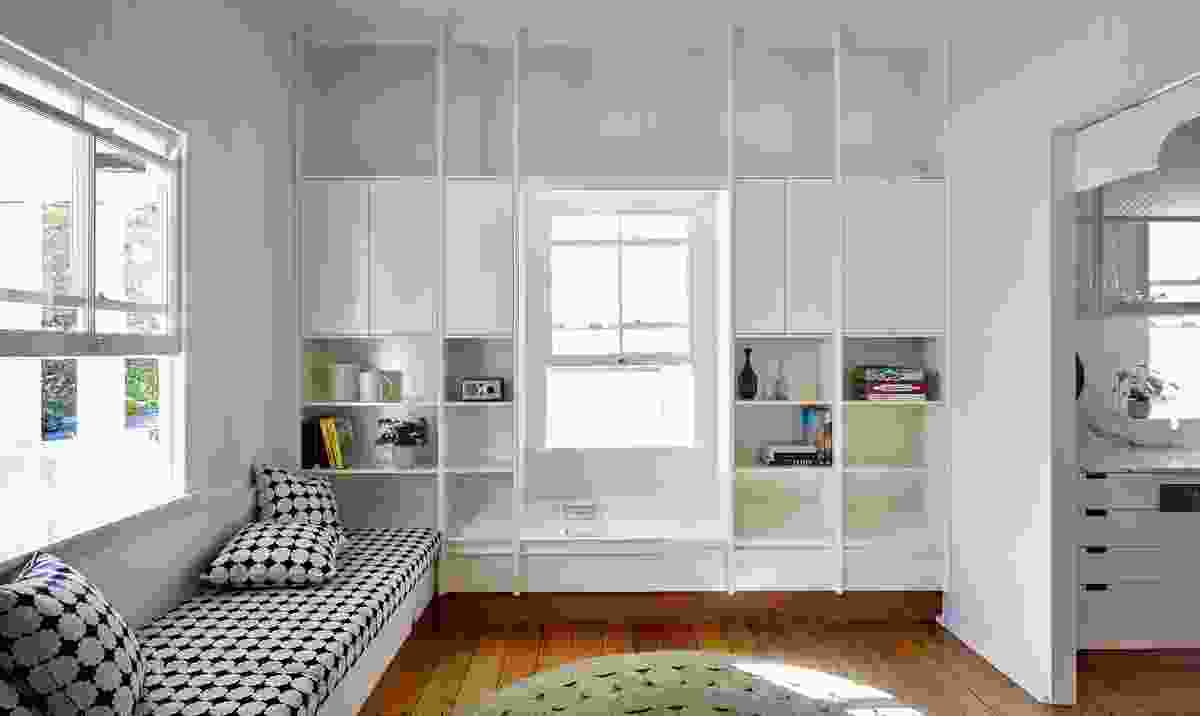 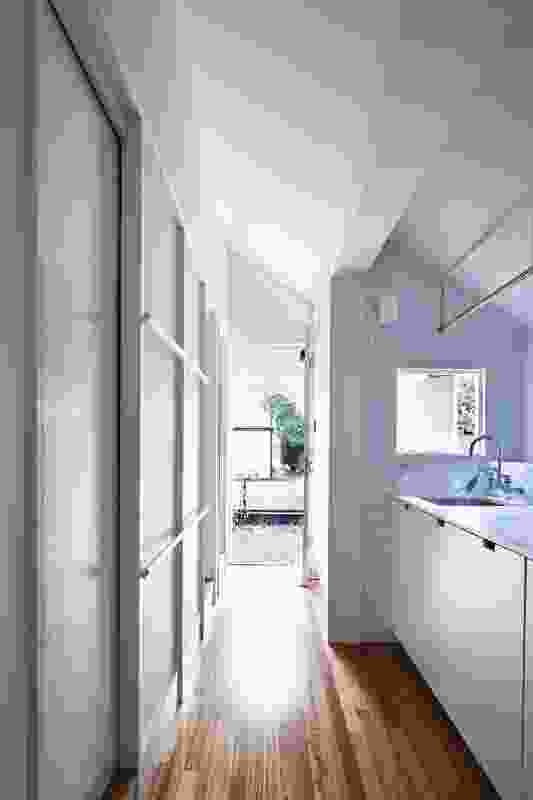 The laundry runs along the lineal axis of the new pavilion, much as the scullery does in the original cottage. Photograph: Alicia Taylor. 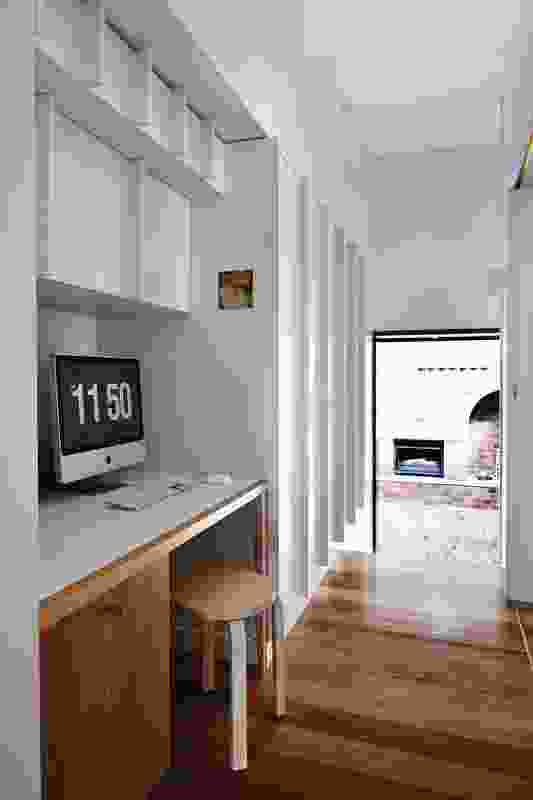 A sideways glimpse from the study nook offers a view to the brick terrace. 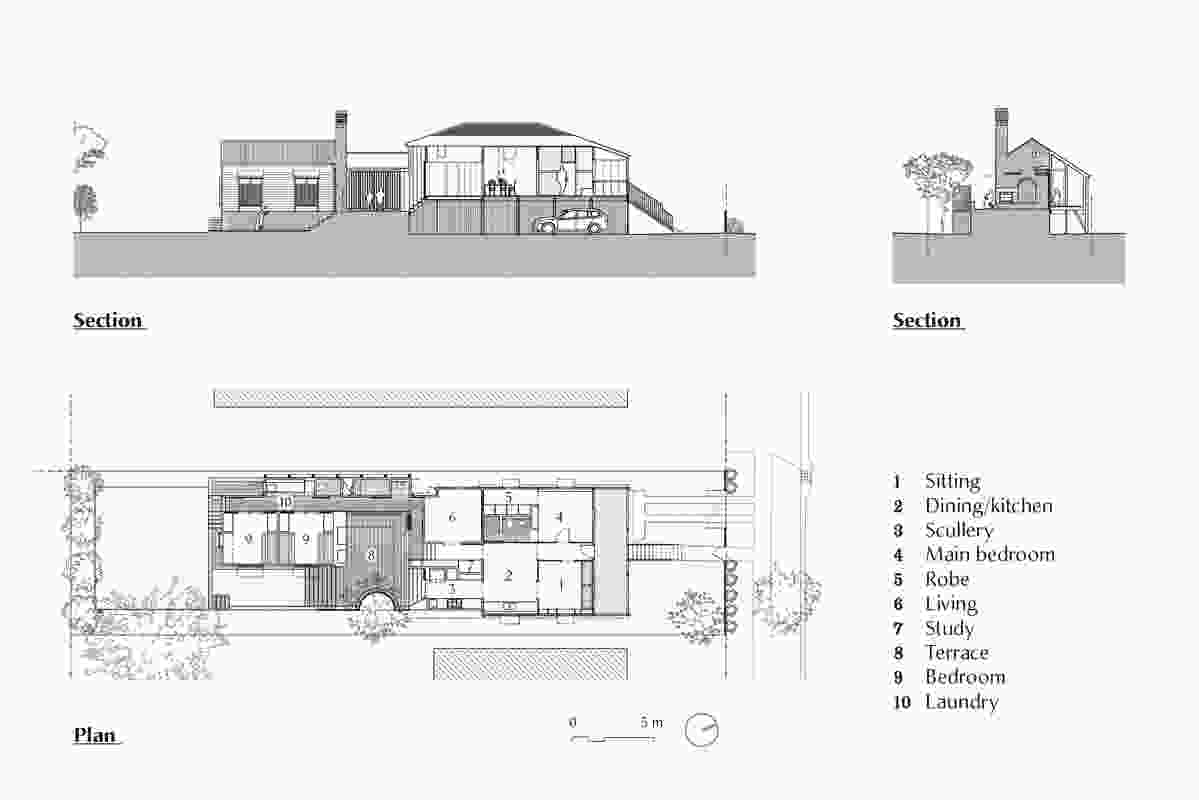