Taking cues from existing trees on site, this renovation and extension to a Queenslander by Marc and Co Architects opens up and embraces a delightful backyard setting.

The two-storey extension fits neatly into its garden surrounds, using a large mango tree as a focal point.

Reconfiguring the backyard as a place of joyous play and restful prospect has been a consistent trope in postwar residential suburban architecture. It represents a reversal of cultural and social priorities over several decades, in which family privacy prevails and the frontispiece adopts a secondary role. In the case of old Queenslanders, back-of-house often comprised a factory of functional work sheds, chookyards, vegetable gardens and, of course, the essential earth closet. In some cases, remnant slit trenches or more elaborate concrete air raid shelters still exist in backyards. No wonder the focus was firmly on the front-of-house display of neat flowerbeds, hedged lawns and crisply painted chamfer boards.

West End House, on an 800-square-metre site in Brisbane’s inner south, was redeveloped by Angus Munro of Marc and Co Architects. It maintains a subdued street presence while opening the rear of the home to a world of playful opportunities and visual delight.

The original home, circa 1920, sits primly on its site in accordance with patterns established in the area at its inception. Like-minded homes wrapped in pretty verandahs march down the street in a uniform line. After peeling away the various adaptations and excavations over the years, Angus was careful to re-establish the front boundary line with a retaining wall of local porphyry stones, banking against a raised lawn bed dissected by the garden path and entry steps. The verandah of the original home had been filled in as a sleep-out, as was so often the case in the four-room Queenslander. It was reopened to the street in a gesture of sharing and surveillance. In a secret rite of personal branding, the verandah floors, invisible to passers-by, are painted in black and navy patterns: a foretaste of the decorative Iranian Gilana tiles to be found throughout the interiors.

“The owners are private people,” says Angus of the young family of four. “The strategy was to restore the front as reasonably nondescript, then to re-establish a sense of a giant garden out the back, as it once was.”

As original blocks were subsumed by subdivisions, not only was the sense of space lost, but also the act of sharing the gardens. “There were huge gardens along here once,” notes Angus. “We decided to keep the idea of [sharing the] landscape with the neighbours.”

With the northern aspect at the rear, the site was ready-made for beautiful thermal and light conditions. The rear of the home was extended to incorporate a main bedroom and ensuite on the upper level. The gentle fall of the land allowed for a living, kitchen and outdoor dining space to be tucked in under, opening directly to the garden.

The two-storey extension fits neatly into its garden surrounds, using a large mango as a focal point. The tyranny of the double-height space towering over the yard is avoided by the quirky artistry of a bowed brick wall protruding beyond the main structure in a luscious curve. The bow window has a low sill and from the interior banquette offers a perfect observation point for the garden and a focus on the large mango tree on the eastern boundary. The roof is paved in bricks, making it a pleasing space to observe from above.

The sensuous curve is repeated in the interior stair. Wrapped in white vertical joint boards, the stair is a solid, sculptural object that divides living from dining spaces while providing a set of intriguing circulation routes around the lower floor spaces.

“The corridors of an old Queenslander always presented lots of ways to get around a house,” says Angus. “I wanted to play with that idea here by creating alternative passages, while also enhancing the scale and complexity of the space.”

The genesis of the curved geometry was in the root ball of the neighbour’s old poinciana tree. An arborist established the extent of the tree’s root ball, and in an act of preservation as well as deference, Angus took his cue from its shape. Curved outdoor ledges near the tree echo the bowed window, while in between a rigid bar of space houses the kitchen and an upper room. Beyond, on the northern boundary, the straight line is repeated in the pool and enclosure.

In a further paean to the poinciana tree, the kitchen splashback has been replaced with a wall of glass that frames it. The oversized band of glazing is a dramatic picture window that brings in the adjacent side garden and curved seating, and captures the tree’s gnarly trunk at eye level. And, in traditional Queenslander style where guests and occupants seldom favour the front door over the back, the path from the carport to the living rooms sits right next to the kitchen window. Arriving under the arbour is a good starting point for this house in the garden.

The two-storey extension fits neatly into its garden surrounds, using a large mango tree as a focal point. 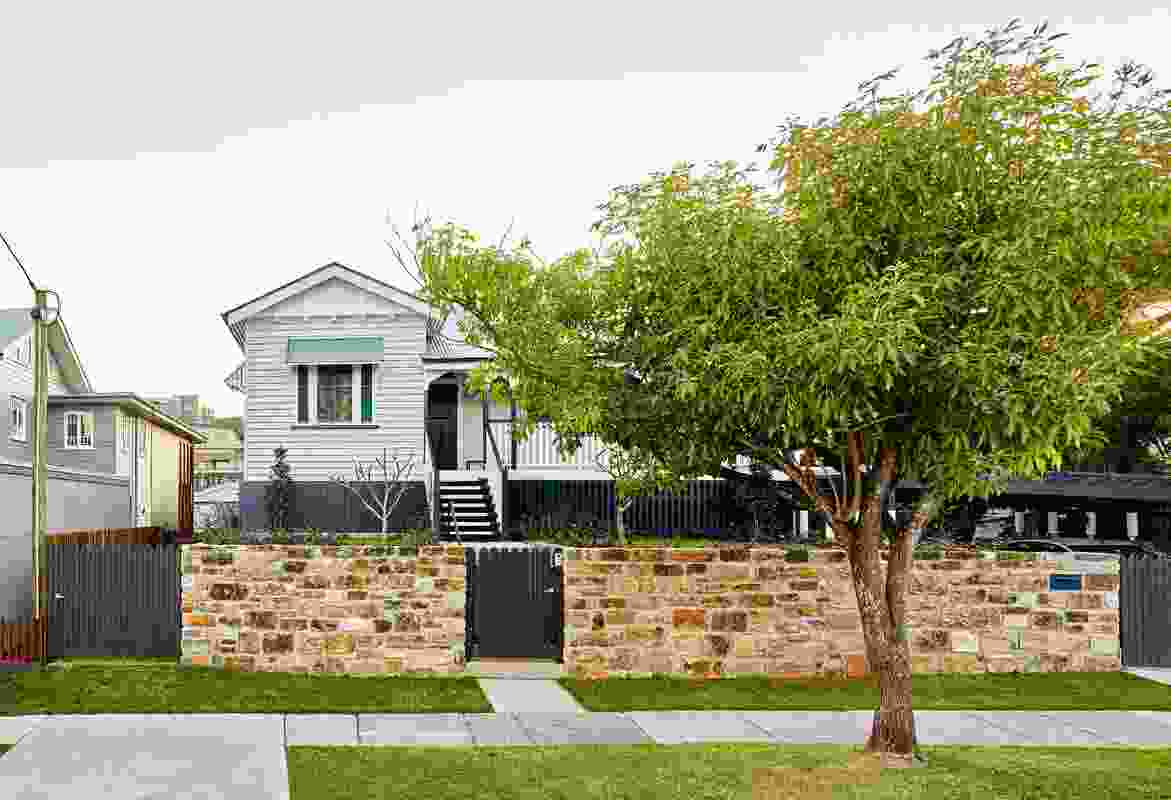 The various alterations to the 1920s home have been stripped back to reinstate the original front facade and verandah. 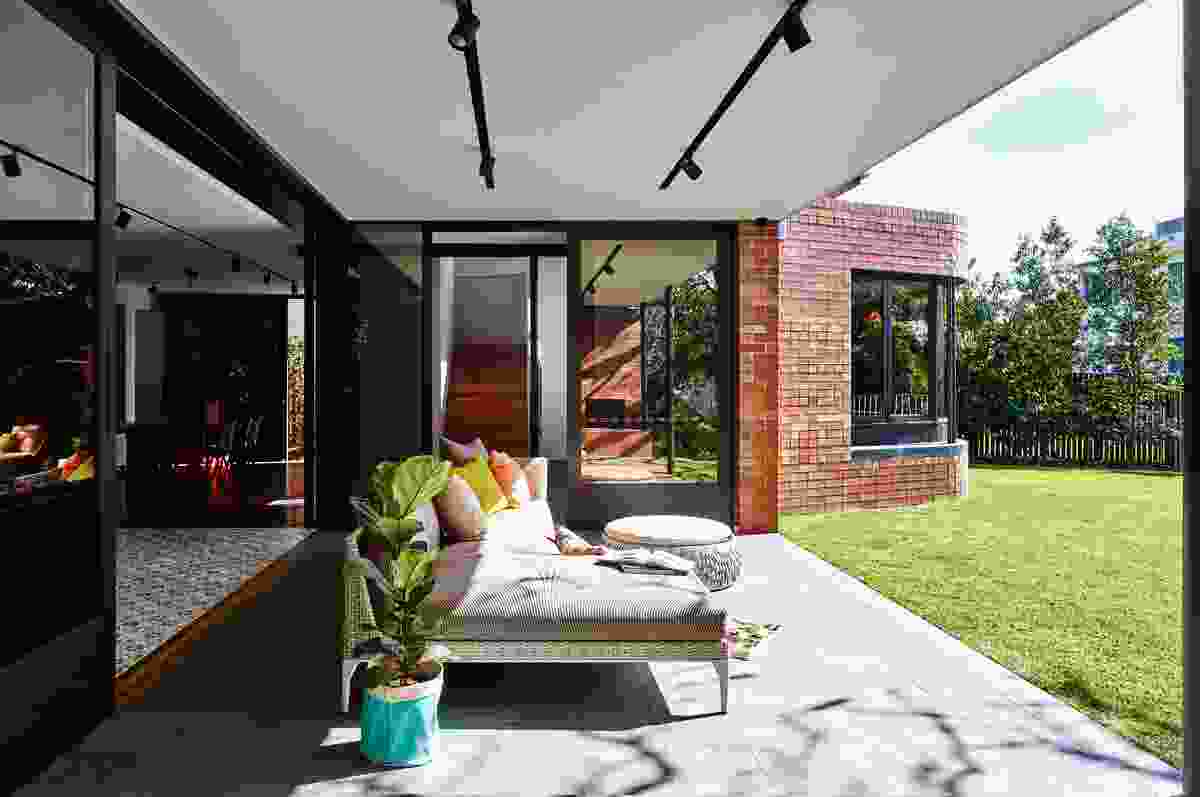 The use of curved geometry throughout the house was inspired by the root ball of the neighbour’s old poinciana tree. 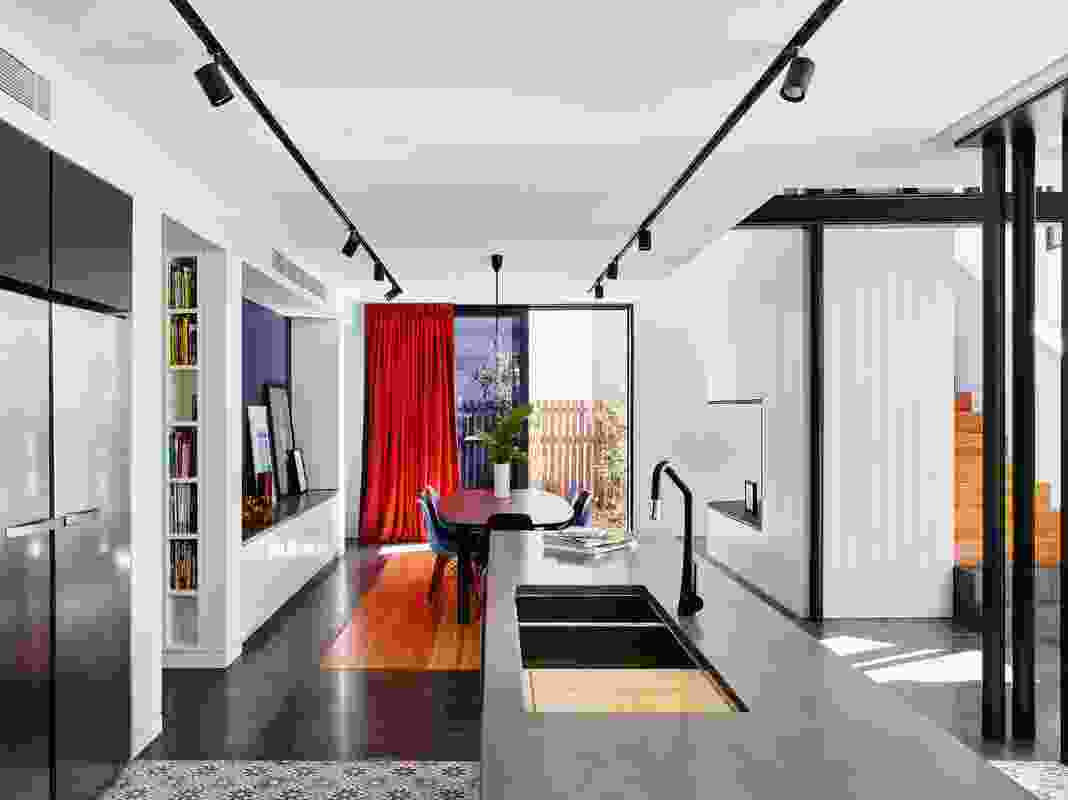 Opening directly onto a terrace, the kitchen is tucked under a TV room next to the main bedroom. 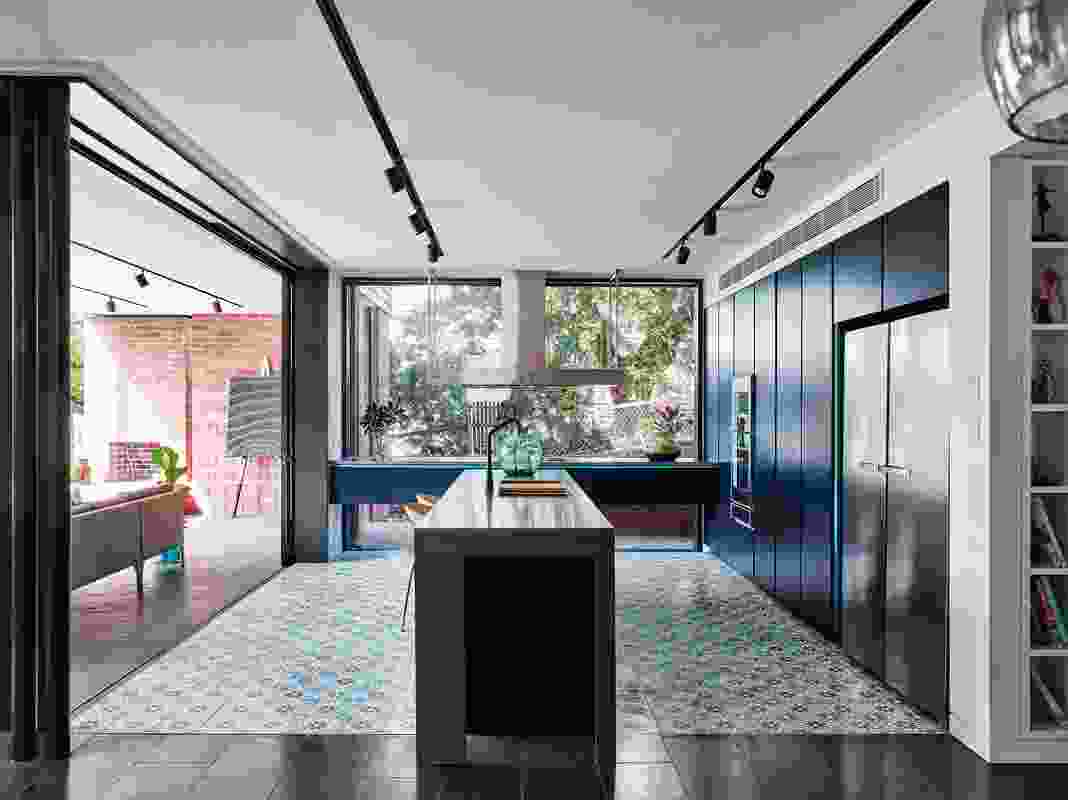 05 The kitchen splashback is replaced by a picture window to the adjacent side garden and curved seating. Artwork: Lily Kelly Napangardi. 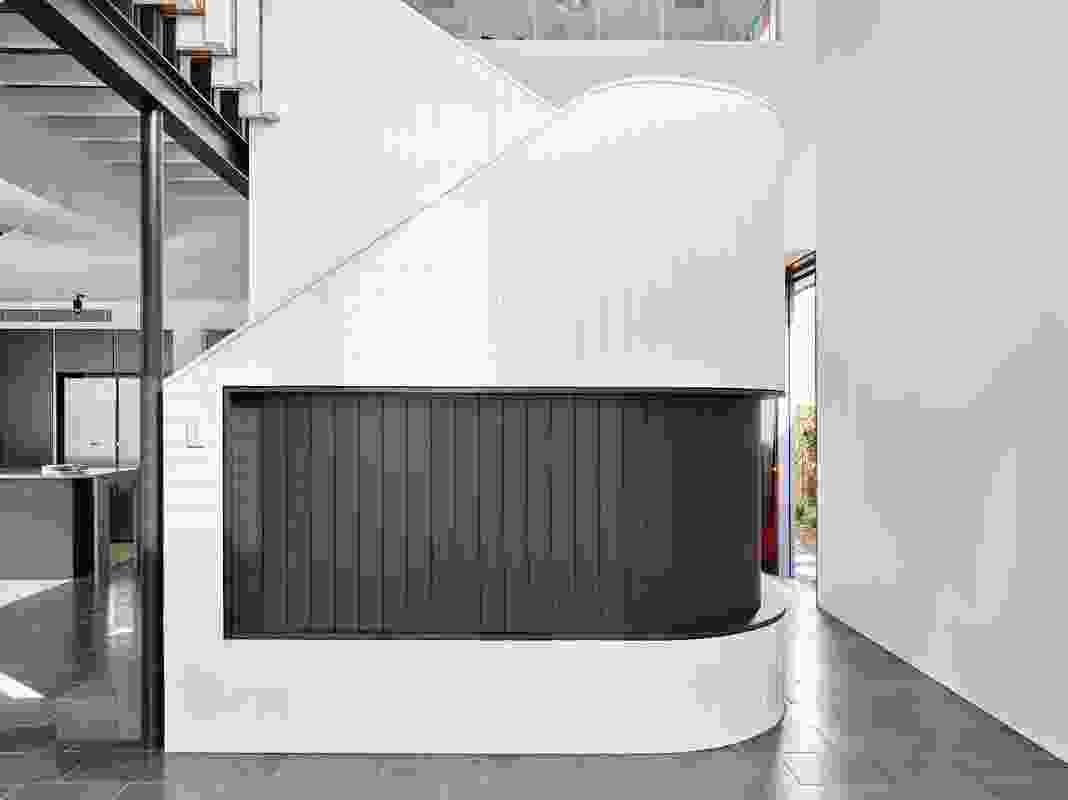 Wrapped in white vertical joint boards, the stair is a solid, sculptural object that divides living from dining spaces. 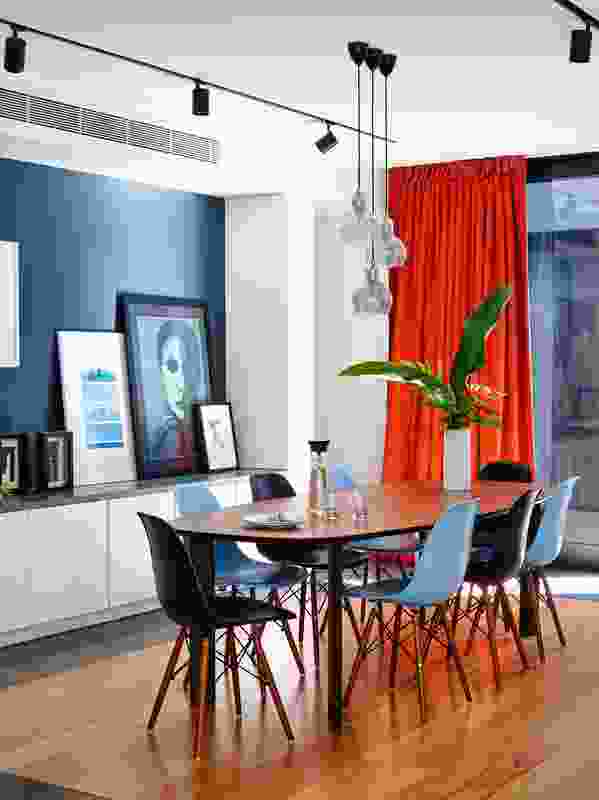 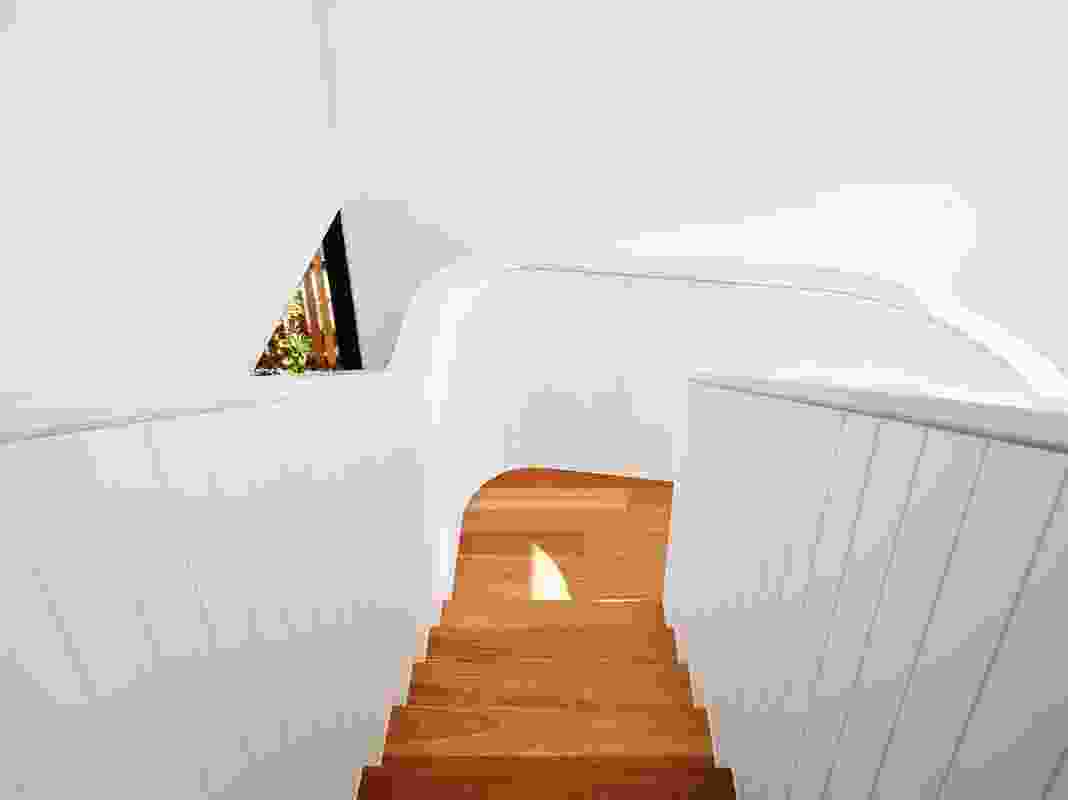 As well as being a sculptural element, the stair provides a set of intriguing circulation routes around the lower floor spaces and up to the first floor.