This understated holiday house carefully negotiates privacy and openness, turning its back on the street to embrace its lush coastal setting.

Framed in salvaged wandoo, a picture window gazes into the treetops from the main living space.

There is a shyness to this house. Its stately facade of blackbutt timber panelling is unbroken by doors or other obvious access points (a single window can be glimpsed through a pocket of ferns). It becomes a kind of domestic sphinx, nestled in Victorian coastal bushland – cool and calm and utterly inscrutable.

But if the facade gives little away, the reward once inside is doubly sweet – a carefully organized collection of volumes that open enthusiastically to the landscape beyond. The contrast is perfectly executed, the introversion of the street frontage balanced by an intimate connection with the bushland.

“There are elements of protection and vulnerability – you need some of both,” says architect Sally Draper. “That idea is visible in this house – that quite abstract exterior that faces the public realm; but, when you come inside, it’s quite glassy and open to the world.”

This northern face of the building engages in a vigorous conversation with the surrounding landscape. A double-height lightwell at entry, peopled by one of Bruce Armstrong’s iconic eagle sculptures, reaches out to trees and shrubbery beyond. In the main living space, 3.9-metre-high doors greet the land, sliding open to encourage even greater connection across an expansive deck. Perhaps the most beautiful voice is the deep picture window at the eastern end of the living room. Framed in recycled wandoo rescued from an old woolshed, this elegant window seat is wide and deep and upholstered in brown leather. It projects past the building envelope, speaking quietly into the treetops that crown the cliff above the beach.

These discrete interactions with the site from various points in the house were a deliberate strategy for Sally. “How do you inhabit a big landscape? How do you make spaces that feel protected, that feel like you can inhabit them and not just look at them, places that you can be in comfortably? It’s an ongoing part of our work on country houses and rural houses.”

This exploration is manifested further in the house’s outdoor spaces. Each bears a distinctive character. The house’s decks, for example: one splashed with sun, accessed via the main living space; a second alongside the main bedroom, quieter and smaller, protected by a high wall of ashlar stone; and a third, a private deck for one next to the kitchen. In the garden, there is a rustic fire pit surrounded by rough-hewn seating at the far edge of the site, a place for gazing out through the trees to the beach.

There is a further outdoor space that is much more entwined in the brief – and much more personal as a result. Below the second deck, a cosy undercroft has been transformed into an outdoor kitchen. Pizza making and the bottling of tomato sauce are family traditions for the client, so this central gathering space – rugged and practical in its finishes – is the perfect working space. Two nooks in the base of the ashlar wall house a barbecue and a fireplace while, on the southern side, a central wood-fire oven is flanked by a pair of bar fridges on one side and a sink and bar on the other. A custom bench completes the array: stainless steel on top for the bottling of tomato sauce, with timber shelves below for proving pizza dough. “All of our houses are very different. They’re very much informed by the nature of the site, the location, the client, and that’s something we enjoy exploring. What is this particular family about? What’s special to them?” says Sally of this outdoor kitchen.

With this space at its heart, the house assumes an F-shaped plan, with two wings extending north and a further volume pushing east toward the beach. This space planning, too, was part of the brief – a house that can function as a cosy space for a couple, or more expansive accommodation when extended family are in town. Sally’s deft arrangement of spaces achieves this duality: “The wing where the other bedrooms are can be closed off, so this becomes a lovely treehouse for two,” she says of the eastern wing.

This F-shaped plan performs another task too, interlocking the built form with the landscape, bringing the site into close contact with every part of the house. “It’s not a one-line statement – ‘the beautiful pavilion that looks out at the view,’ ” Sally says. “It’s something much more enmeshed, one into the other, like a jigsaw. The house toothes into the landscape, providing a range of different experiences appropriate to different seasons, to different people.”

In section, the house performs a similar mediation with the sloping site. Sally was keen for the house to be grounded in the landscape, to be connected at all levels. But the fecund landscape meant the best views were only available at an elevated height. The solution was a plan that steps up gradually by half levels – ascent is not obvious, and it allows the house to be elevated but to feel grounded. It is a manoeuvre that makes sense – the solidity of the heavy picture window frame and ashlar hearth in the living room might have felt a little uncomfortable in an obviously elevated space; but here they feel natural, sturdy and embedded.

“When I was working out what the form of this house should be, I thought a lot about where it sits in the bushland coastal environment,” Sally says. “Generally here it is a bit about the beach, but it’s more about the rural community. The house lent itself to being a very simple timber structure, a very calm, still object.”

This house received a high commendation in the New House over 200 square metres category of the 2011 Houses Awards. 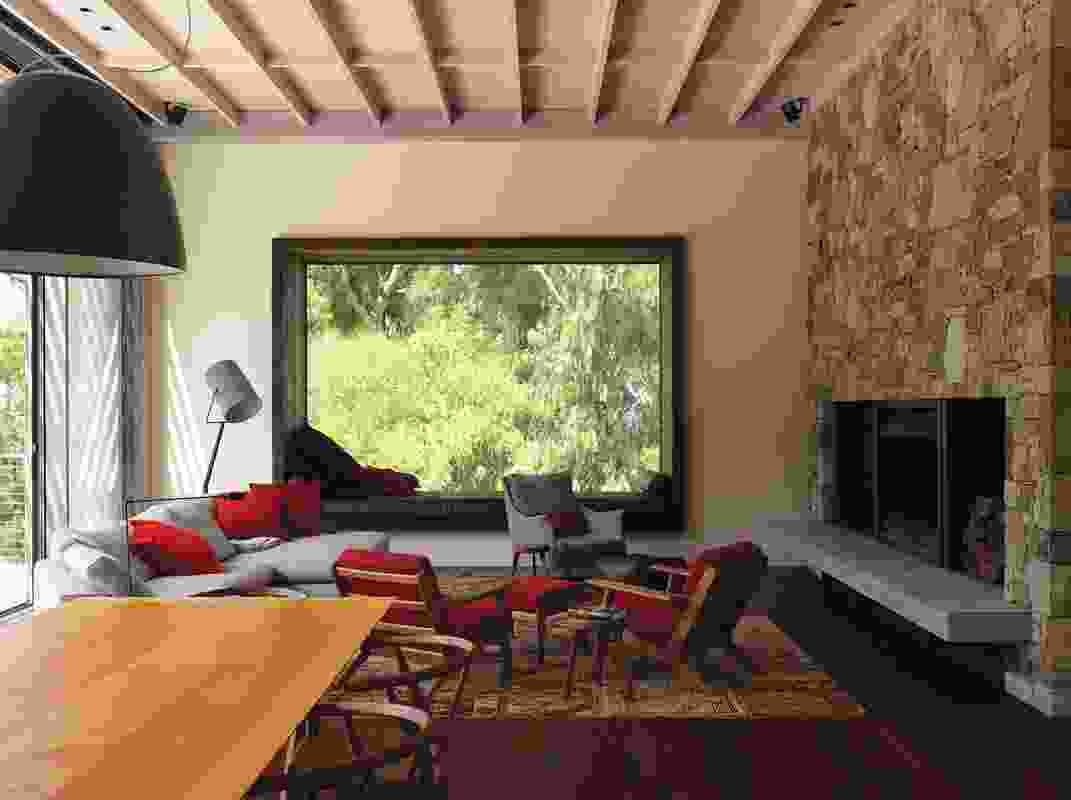 Framed in salvaged wandoo, a picture window gazes into the treetops from the main living space.

View of the northern facade. The house’s rectilinear forms are realized in sturdy, honest materials. 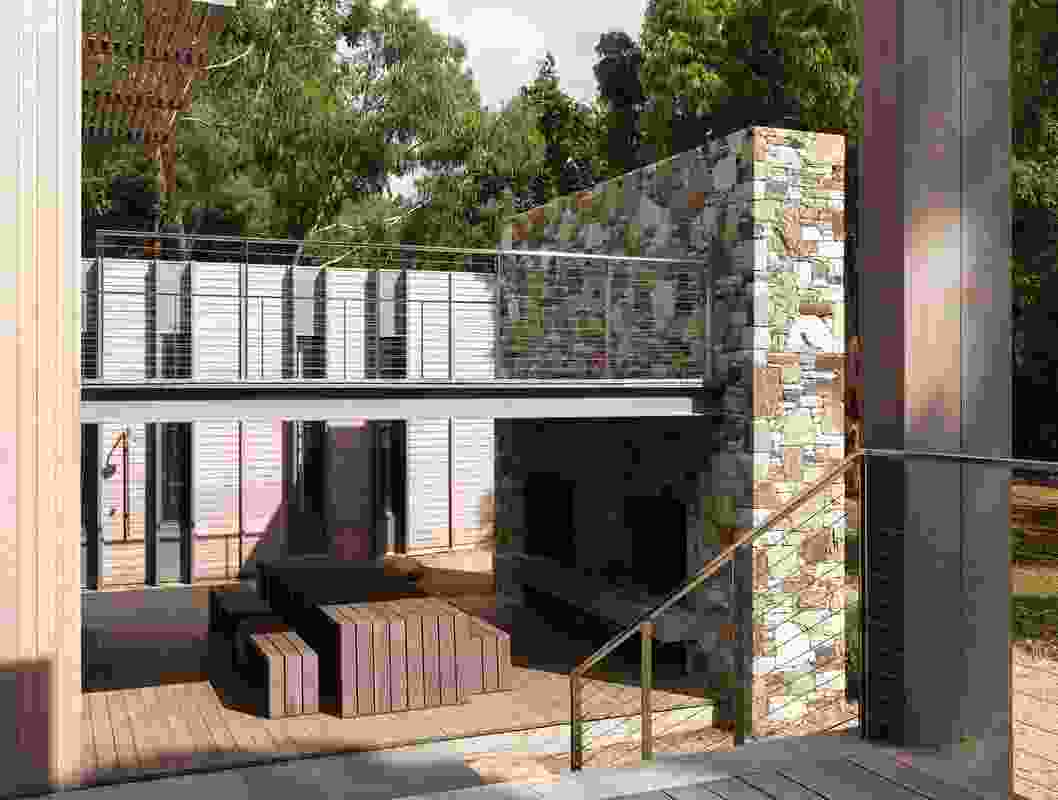 The undercroft of the second deck houses an outdoor kitchen. 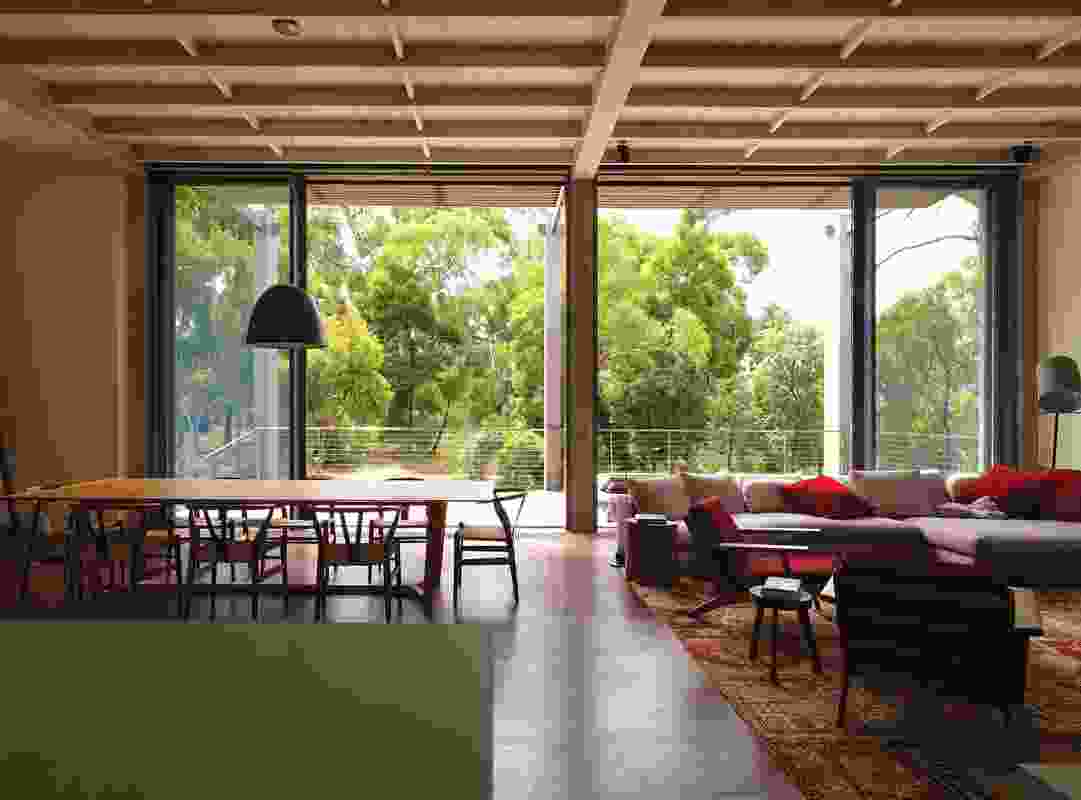 In the main living space, 3.9-metre-high doors open to the north, admitting light and air. 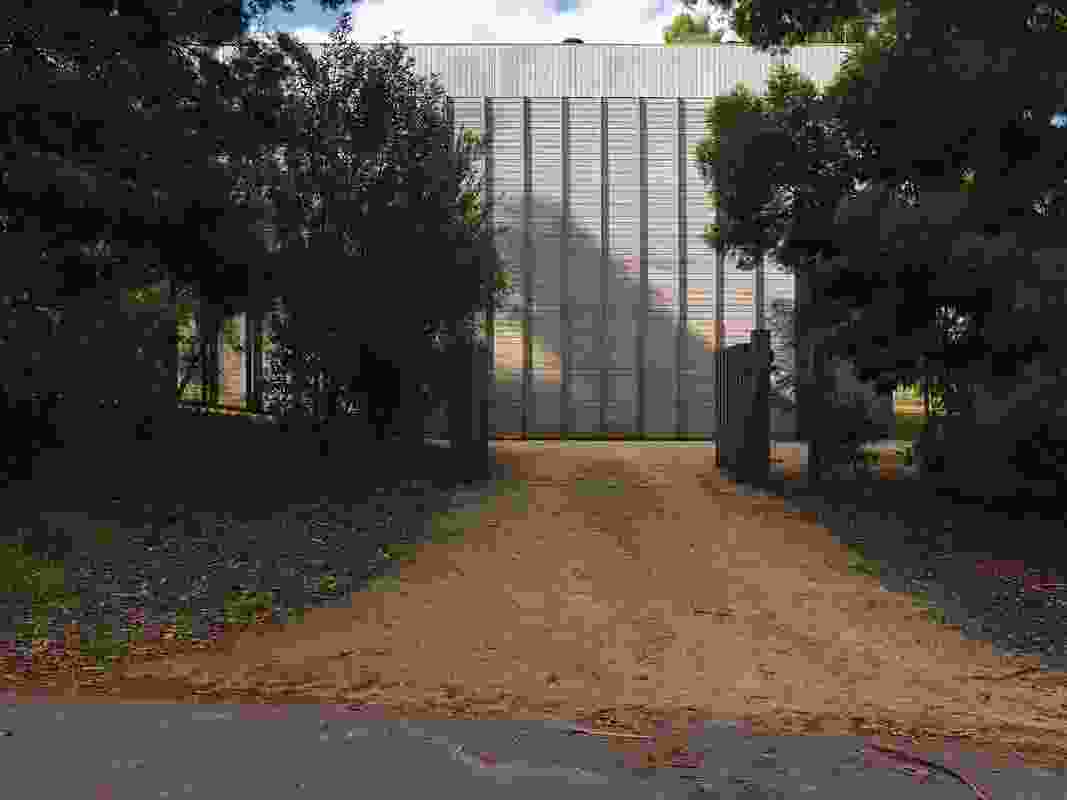 The house presents an inscrutable visage to the street, revealing little of the openness beyond. 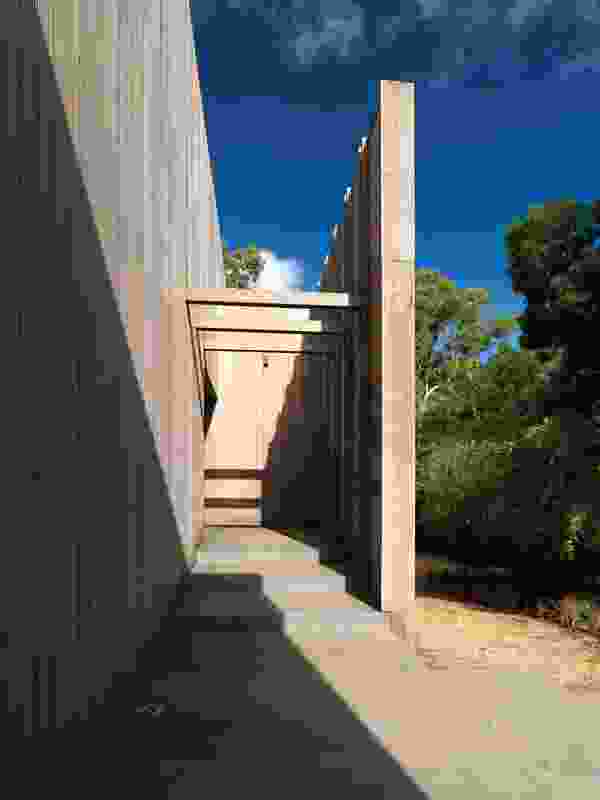 The entry to the house from the street is concealed by screens of blackbutt timber.