In this addition to a suburban Melbourne house by Kennedy Nolan, a seemingly straightforward move has proven unusually interesting and graceful.

The existing house, an Edwardian weatherboard, has been remodelled as a private family wing.

In a quiet back street of Westgarth, near the Merri Creek in Melbourne’s northern suburbs, an Edwardian weatherboard occupies a street corner. Its backyard presents its long street-facing side to the north and enjoys borrowed views of trees. According to architect Rachel Nolan, co-director of Kennedy Nolan, it was “no great epiphany” to put a new living area down the south boundary and open it up to the views and sun. But the Westgarth House is winning awards – so far one from the Victorian Chapter of the Australian Institute of Architects in the Alterations and Additions category, and another from the Houses Awards in the House in a Heritage Context category – proof that what Kennedy Nolan designed is far from ordinary.

The addition is low-slung and flat-roofed, reminiscent of 1960s architecture, although Kennedy Nolan has its own take on this mode. “One of the problems with having a flat roof is that you end up with big fat fascias,” says Rachel. The architects worked hard on the detail and created what they call “the bird’s beak,” a white-painted steel fascia, its width split in two by a fold of light and shade. The invention became a motif, repeated in the profile of the fence, the cover of the fuse box and a graphic painted on an interior wall. There is a level of quiet consistency in the design choices. Textures are varied, often drawn from the existing house, but colour is restricted to shades of white and grey. The floor is travertine and the only colour deviation comes from the natural oak kitchen joinery and from the garden.

Designing for a professional couple with children, the architects dealt carefully with issues of public and private space. Having opened the new living/dining room to the north and garden with giant minimalist sliding glass doors, they created a new public face and entry. A privacy screen was inserted between the new entry path and the extension, in the form of a rendered masonry wall. The wall begins inside, partially dividing the kitchen from the living spaces, and then extends out to the front fence, artfully stepping down in height as it does so. A circular opening, reminiscent of a moon gate from Chinese garden traditions, allows edited glimpses between old and new, and presents a playful way to move between the spaces that’s not just for the kids.

The new public entry is directed into the kitchen. Turning the chief service zone of the house into the entry hall makes the kitchen work harder than normal. The island bench becomes a rock in the stream of circulation, a hub around which people flow in and out of the house, or to and from the new part to the old. This “rock” is appropriately robust, made from marble and masonry. The sink and cooktop are located on the wall benches, leaving a plain expanse of marble. The fridge is out of sight, and a wall lined with cork pinboard is located around another corner, concealing the private, less curated parts of family life from guests. Kennedy Nolan has always been serious about designing the service zones in its houses. “It’s something we don’t really talk about anymore, it’s just so ingrained in the way we plan,” says Rachel. “There is never the question towards the end of the design – ‘Oh, where are we going to put the bins?’ – it’s all worked out from the beginning.”

Having decided to unite the different textures and materials with white paint, with just the oak and stone surfaces left unpainted, Kennedy Nolan selected a darker tone to blend the wall with the travertine floor, and linked this colour with the white in the bird’s beak motif. “The graphic is playful; it doesn’t need to be there forever. It brings a level of complexity that is as cheap as paint,” says Rachel.

The existing house is dark compared to the light-filled extension, and made from lightweight timber in contrast to the heavy concrete and masonry of the addition. It has been remodelled to become the private family wing, newly carpeted for acoustics and comfort and for a child-friendly play surface. A new set of stairs grants access to a small loft within the Edwardian roof space. The transition between the old and new parts of the house was carefully considered. “What is probably the most interesting space wasn’t really part of the brief,” says Rachel. “It unlocks how you move from new into old.” She is talking about the new study, which functions as a semipublic transition space.

The architects at Kennedy Nolan understood the potential of this site and made the most of it. It gave them an opportunity to demonstrate their strength in creating graceful living spaces that smoothly marry old and new. They’ve done what most good architects would do, but they’ve done it with particular grace, style and finesse. I am left with a strong impression of intelligence and thoughtfulness – even when handling the obvious, this architecture practice excels. In its own words, perhaps it’s not a “great epiphany,” but it is a small marvel nonetheless. 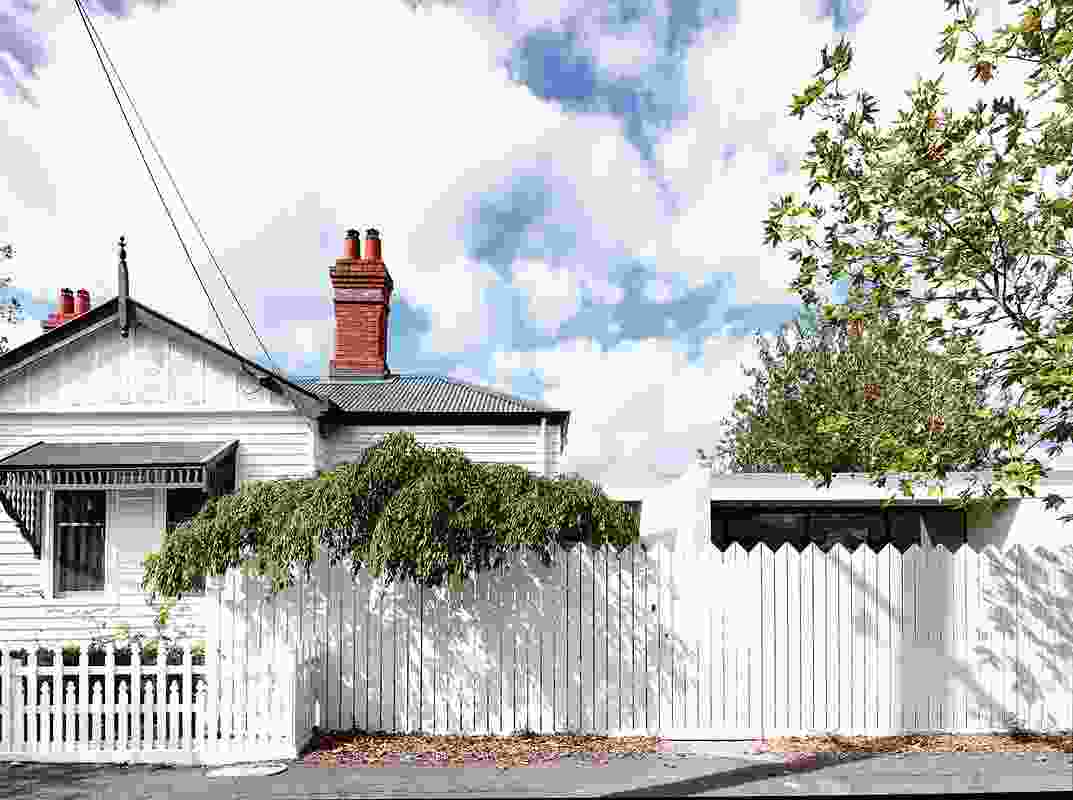 The existing house, an Edwardian weatherboard, has been remodelled as a private family wing. 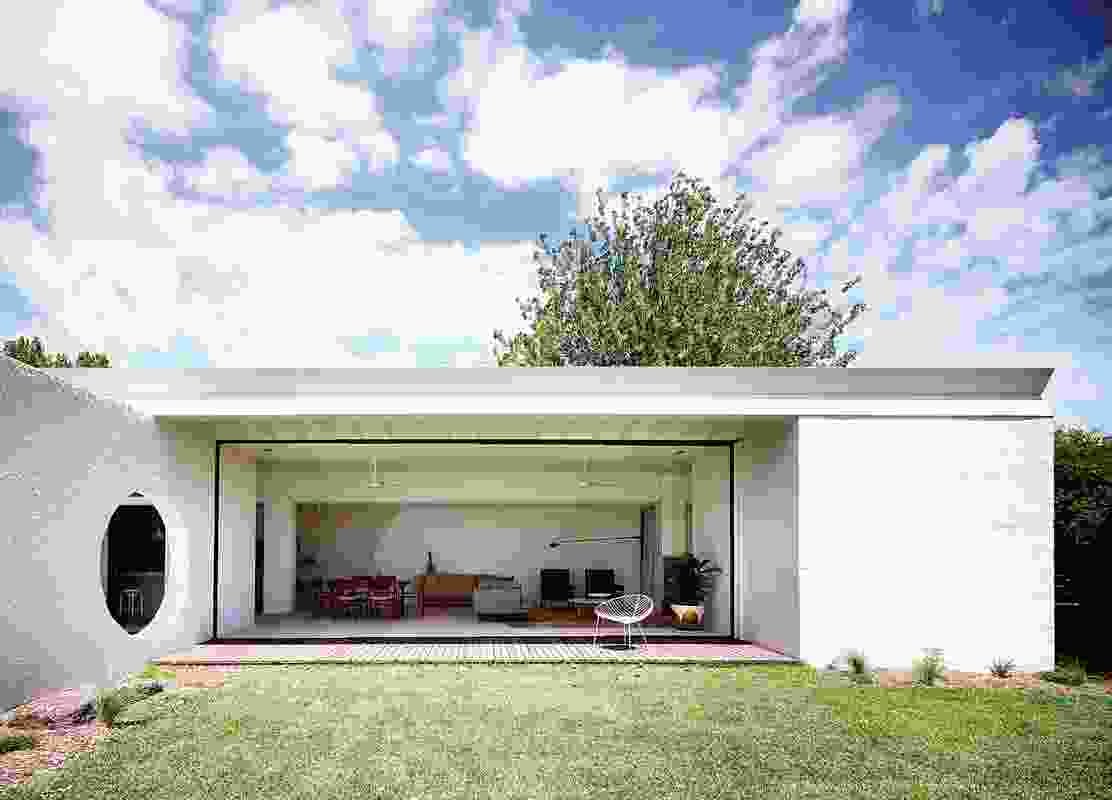 The new living pavilion, with its flat roof and “bird’s beak” fascia, embraces the garden. 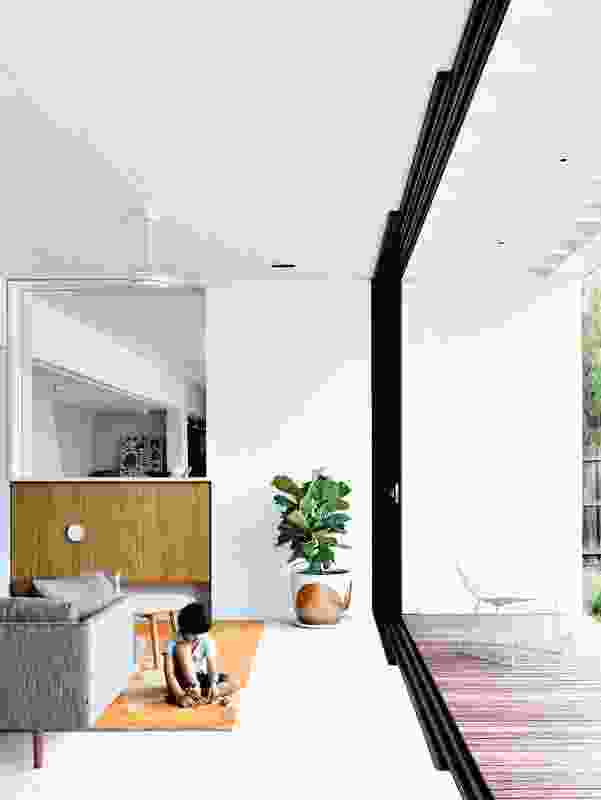 Different textures and materials have been united in the extension by white paint. Artwork: Rosetta Santucci. 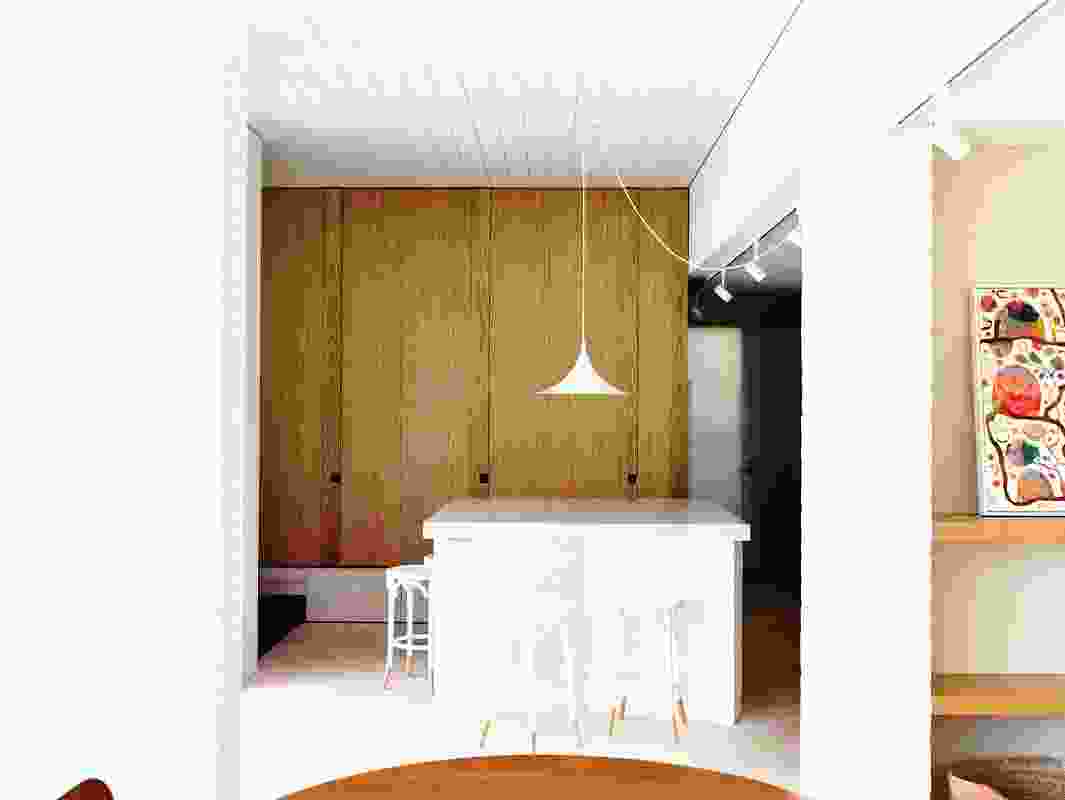 The kitchen is now also the entry hall, a hub around which all circulation flows. 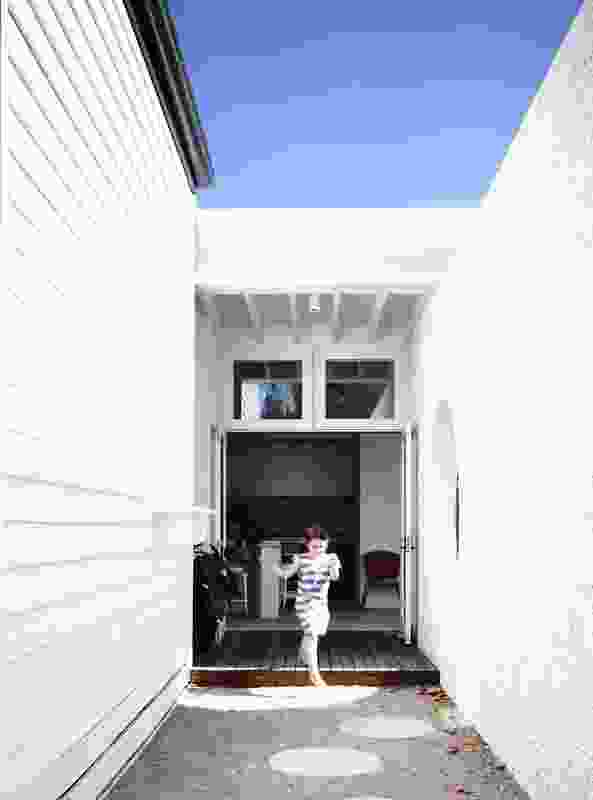 A privacy screen was inserted between the new entry path and the extension, in the form of a rendered masonry wall. 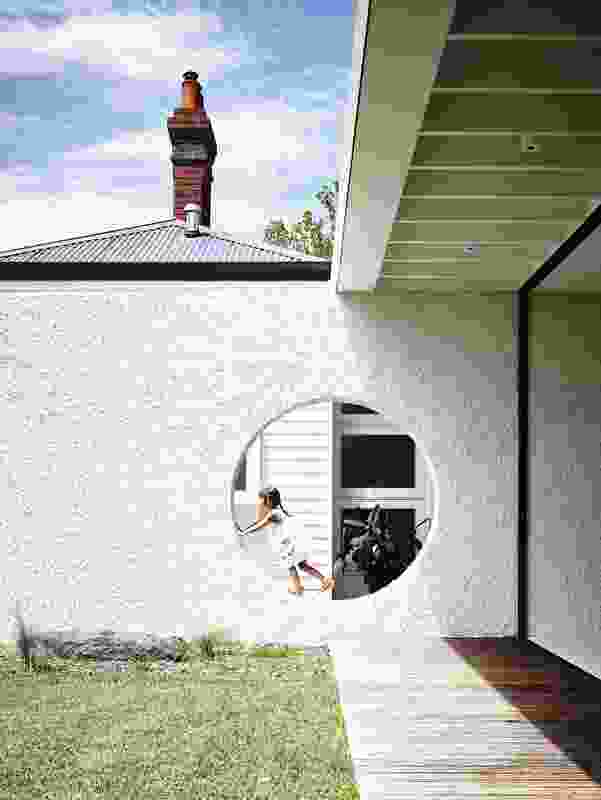 A circular opening in the rendered masonry entry wall is reminiscent of a moon gate. 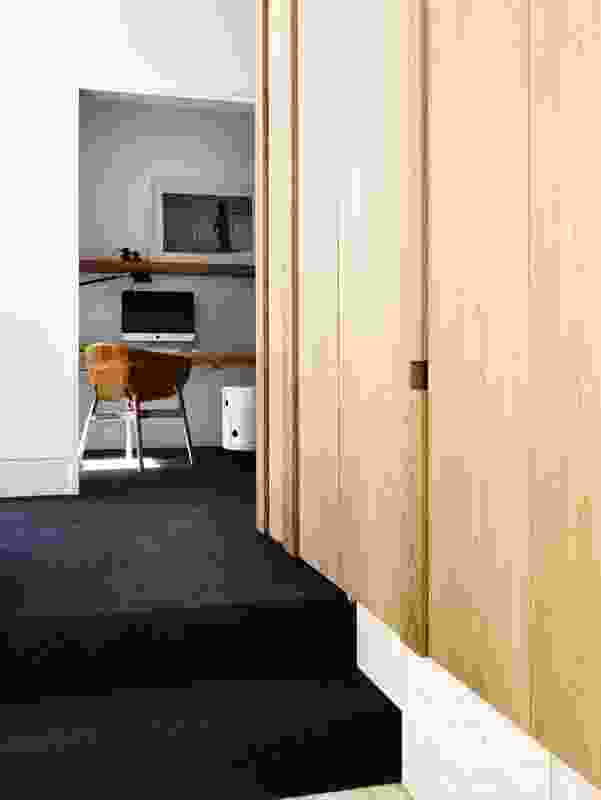 The new study functions as a semipublic transition space. 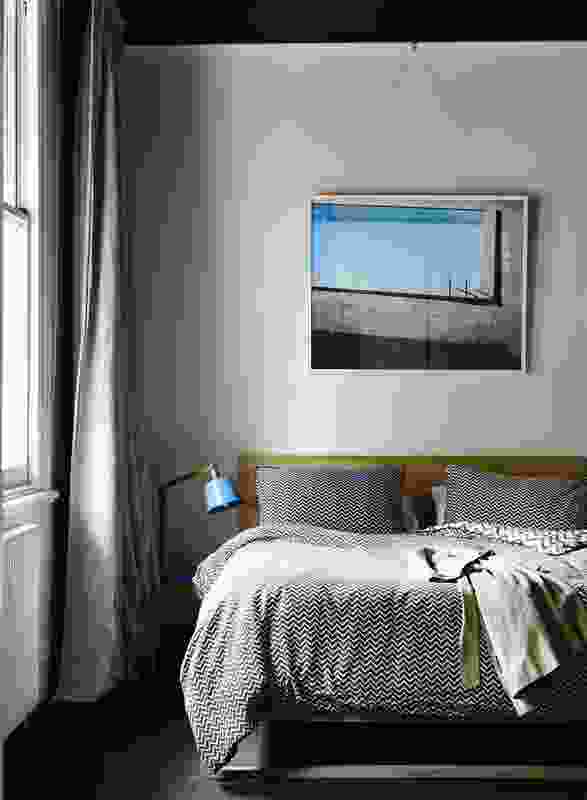 Textures are varied, often drawn from the existing house, but colour is restricted to shades of white and grey. Artwork: Sean Fennessy. 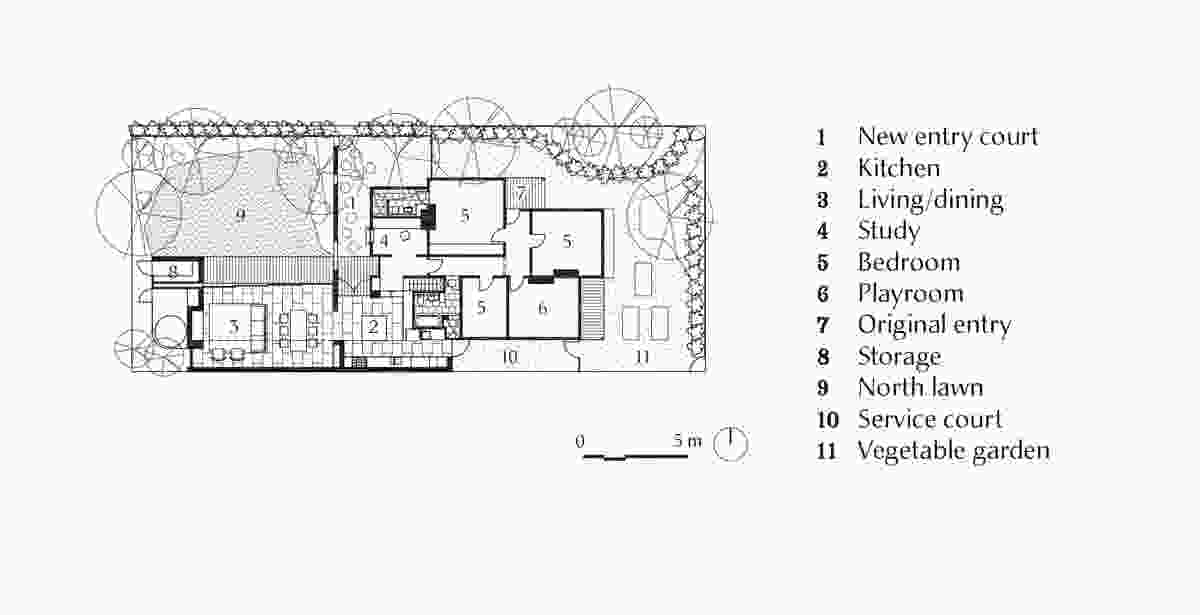