What does ‘Free Trade’ with China mean for Australia’s architects?

We review the implications of the China-Australia Free Trade Agreement for Australian architects.

Cox Rayner’s competition winning design for the Tianjin Maritime Museum in China was used by prime minister Malcolm Turnbull as an example of the opportunities for Australian architects in China.

Legislation for the China-Australia Free Trade Agreement (ChAFTA) passed through the Australian parliament on 9 November 2015. In relation to architectural and urban planning services, the Department of Foreign Affairs and Trade (DFAT) has heralded the agreement with China as “providing the best treatment under any of [China’s] free trade agreements.”

However, some architects question whether ChAFTA will actually deliver improved access to the Chinese market and there are fears the agreement leaves the Australian market vulnerable to increased competition.

There are two key changes that relate to the restrictions on the scope of works China permits Australian architects to undertake within its borders and the level of permanent presence that Australian practices are required to maintain there.

The agreement stipulates, “For Australian architectural enterprises established in China, when applying for higher-level qualifications, their performance in China and Australia will be recognized by the competent authority in the process of review and approval.”

Under pre-ChAFTA arrangements, Australian practices operating in China were required to submit their construction documents to a statutory body, the Local Design Institute (LDI), for authorization.

ChAFTA removes some limitations to market access with no restrictions on schematic design. However the agreement states “cooperation with Chinese professional organizations is required except scheme design”.

“Most observers have interpreted the new ChAFTA provision as enabling Australian architectural firms to operate in China without LDI oversight,” wrote architect Scott Flett in Business Spectator. “This change will certainly appeal to architects who would like more control and influence on the construction detailing of their buildings.”

Another significant change concerns the regulation that foreign-owned companies operating in China must set up a permanent presence either as a joint venture or a wholly foreign owned company. Decree 114 jointly issued by China’s Ministry of Construction and the Ministry of Commerce stipulates that design companies must also maintain a fixed percentage of staff with dual design qualifications. According legal resource hg.org, “The capital requirements for industrial qualifications run from RMB6 million (AU$1,298,148) for a full qualification to RMBO.5 million (AU$108,179) for a partial qualification.”

The ChAFTA now removes the requirement for Australian practices to have a permanent presence. Under the agreement, Australian firms are permitted to enter China “temporarily in order to perform a service,” which includes architectural and urban planning services, “as stipulated in the terms of the contracts concerned or for an initial stay of not exceeding one year.”

So does the ChAFTA mean more market access for Australian architects?

Cox Rayner’s principal director Michael Rayner told ArchitectureAU, “I personally think it’s all a good thing and it will work in favour of Australia in the long run.”

“The fact that there is the ability to more freely establish an office [in China] will be of assistance to us,” Rayner continued. “We would definitely be interested in establishing an office there under the FTA but we know it would be a major investment to do that.”

According to research commissioned by the Norwegian Consulate General Guangzhou, “second-tier cities in China [which include Hangzhou, Nanjing, Suzhou, Tianjin, Wuhan, Chongqing, Chengdu, Dalian, Shenyang and Qingdao] boast a double-digit growth, implying the possibility of rapid growth and certain market spaces. Among the third-tier cities, the rapidly developing construction markets in Zhejiang and Jiangsu provinces rank top all along for total amounts of building construction contracts and have very promising prospects for development.”

However in spite of the advantages, China’s culture and business environment will remain a significant barrier to entry, according to Robert Caulfield, former national president of the Australian Institute of Architects and founder of Archicentre. “From a business point of view, it’s tough. In most cases, work, projects and contacts come through relationships. So a company just going in bare without those connections and networks is going to find it very hard to get leads on work. And that won’t change. That’s sort of an inherent part of the Chinese culture.”

What are the potential problems?

In a 2005 submission to DFAT, the Australian Institute of Architects highlighted a number of concerns including:

According to Business Spectator’s Scott Flett, these concerns “are all unaddressed in the ChAFTA.”

He also said the free trade agreement may increase the level of competition in the local market. “We compete regularly with European, English, American practices. It will just be another group of architects in the mix, really.”

However, analysis of the Australian market conducted by IBIS World reveals “the industry has a low level of globalization as few foreign-owned companies permanently operate in the Australian market and there is minimal international trade.” This is due to the “requirement of architects to be registered and accredited for practice in Australian state or territory jurisdictions, [which] discourage competition import.”

As to the movement of Chinese architects into Australia, the Architects Accreditation Council of Australia is the assessment agency for the department of immigration. CEO Kate Doyle said the ChAFTA “will not diminish the standard required for Australian architects.”

“No one wants to import services from a place that has lesser standards,” she added.

The ChAFTA signifies an “increasing partnership arrangement and an increasing use of services between the two countries,” concluded Robert Caulfield. “I think just by natural growth Australian architects will continue to get an increasing share of work in China and I don’t think we’ll see too many Chinese architects getting an increase of work in Australia.”

What does ‘Free Trade’ with China mean for Australia’s architects? 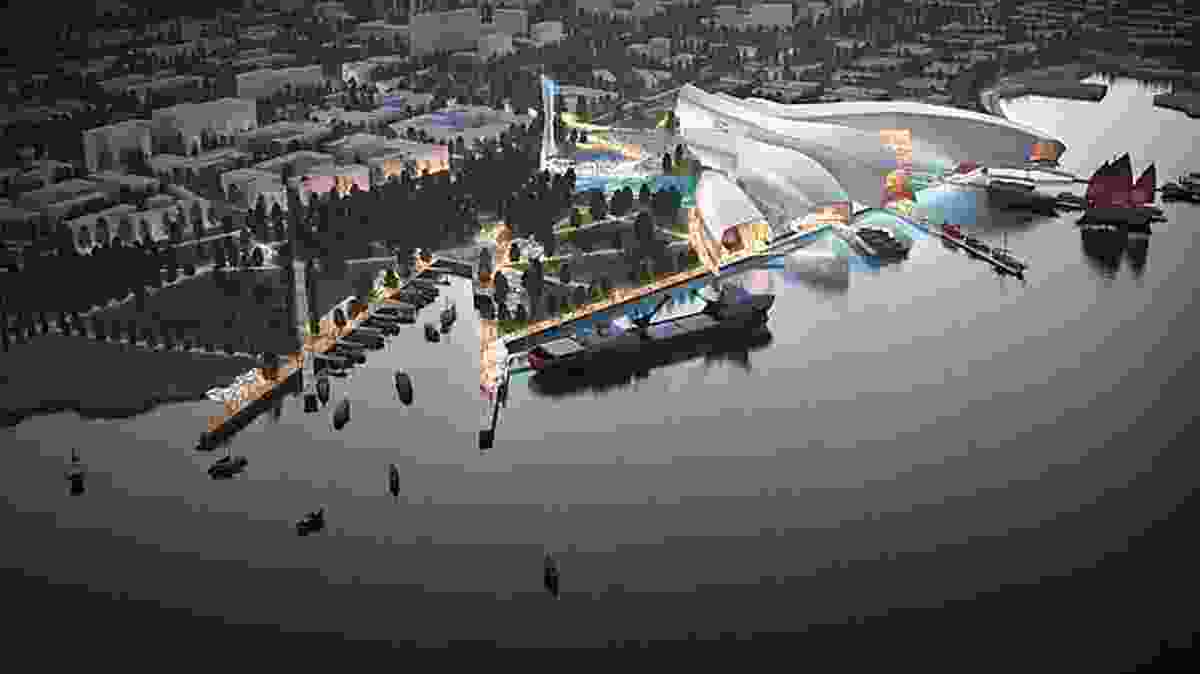 Cox Rayner’s competition winning design for the Tianjin Maritime Museum in China was used by prime minister Malcolm Turnbull as an example of the opportunities for Australian architects in China.