In May 2010, an exhibition of invited projects for central Perth was held at the Perth Town Hall. The projects were commissioned by Perth City Council and coordinated by the city architect, Craig Smith. Such an undertaking of this size is rare for Perth and the organizers are to be congratulated.

All projects dealt with sites in inner Perth that have formed the basis for speculation and debate since at least the 1960s - as Jenny Gregory has noted, the city was the site of drastic “urban improvement” arising from the Stephenson and Hepburn plan of 1955.1 This car-friendly plan called for an inner-ring freeway, including a bridge and freeway connection to South Perth; a branch of the freeway lining the river’s edge in front of the city, feeding car parks that took up a substantial area of the waterfront land; and a freeway separating the city from North Perth. In the ensuing works, the picturesque Mounts Bay area was obliterated and West Perth, including the parliament precinct, was cut off from the central business district. The historic 1866 Pensioner Barracks were demolished, excepting the so-called Barracks Arch, retained as a sop to public sentiment. The central city was thus surrounded - a precinct set aside for business and retail, which continued to demolish its building heritage and replace it with office towers and retail centres. Meanwhile, the residential population continued to fall, as housing in the inner suburbs was progressively replaced by offices servicing the mining boom. At some point, perhaps in anticipation of hosting the America’s Cup yacht race, the good people of Perth looked around and realized that everything that had once lent the city a provincial charm had been extinguished. In comparison with, arguably, every other large Australian city, Perth has the dubious distinction of being the deadest and dullest, with a tiny central and inner Perth population.

Thus in 1985 a foreshore study was prepared, and in 1989 a competition held, for the design of the Perth foreshore and the relationship of the city to its river. The winning entry, by US firm Carr, Lynch, Hack and Sandell, despite public support, fell foul of politics and economics. The more recent scheme by Ashton Raggatt McDougall almost met a similar fate and is currently being substantially revised, with less “design” and more pragmatism. Then and now, influential focus groups like CityVision have muddied the waters by pushing their own agendas for the city’s transformation.

Set against this context, the participants in the What If? exhibition have had their work cut out for them. How do you bring a city back to life? Danish urbanist Jan Gehl had one simple formula - increase the size and diversity of the population living there. This has been addressed in broad terms in the projects by Woods Bagot and Hassell/AECOM. But there is also the problem of the artificial barriers of freeways reducing urban permeability. JCY has proposed a deck over the freeway in front of the Parliament complex - a solution first proposed by Jeffrey Howlett in the 1960s - while Roberts Day and Taylor Burrell Barnett propose to cover the rail corridor east of Barrack Street and west to Thomas Street. Some proposals are more specifically aesthetic in their focus - the projects for “redeeming” Mounts Bay, Langley Park and the arts precinct (Cox Howlett & Bailey Woodland, Urbis and Donaldson and Warn respectively). Other projects, however, are dubious in their assumptions and intentions. Iredale Pedersen Hook proposes to transform the entire building frontage to Kings Park along Thomas Street into a continuous green facade. How this should occur is not explained. This raises an issue: is urban design primarily an aesthetic matter? How might urban complexity - economics, demographics, cultural diversity - intersect with visual representation (the city conceived as an aesthetic tableaux)? The truth is, architects are not usually terribly good at dealing with the urban condition. The props and tricks they use to individuate speculative projects are simply not appropriate at this scale. In this regard, it was refreshing to encounter the restrained, but intelligent, proposal for a new parliamentary forecourt by Pendal and Neille. Spatial and building context was carefully analysed and described, relationships clarified, illogical and arbitrary statutory constraints identified and, finally, a modest but considered set of building insertions proposed. This project knew its limitations.

How, then, to intervene within the city, in a meaningful way that avoids the kind of simplistic, naive optimism that characterized the Stephenson Plan? In this regard, it is worth citing a very significant urbanist, Ignasi de Solà-Morales. Writing of then recent urban operations in Barcelona, he notes, “They are operations which affect parts of the city that have already been constructed. In varying ways and establishing different types of relationship[s] with what already exists … they are representatives of an architecture which does not emerge out of a void, and is not even based on generalized models which are developed out of their own internal logic. On the contrary, it is precisely in terms of the physical setting of the urban location for which they have been produced that they must be seen. Rather than a complex development of a scheme outlined with precision, what all these works of architecture have in common is their circumstantial state.”2 In other words, urban projects by necessity must remain contingent, precarious and sensitive to nuance, to the structures and characteristics that already exist. This contingent approach is also present in the scheme by Pendal and Neille.

The What If? exhibition is valuable on a number of levels. Firstly, it has given public exposure to a number of urban contradictions and constraints - issues which are not usually considered by politicians. Secondly, it has given leading practitioners a voice in publicly presenting what are often long-cherished ideas for the city. Thirdly, and more generally, it has laid bare some of the dilemmas confronting contemporary architects when they approach the complexity of the city with the image-making tools of commercial practice. As such, it forms a useful theoretical context for the real projects that are currently rising in Perth - the State Theatre Centre by Kerry Hill, the Central TAFE building by Lyons, and the Perth Arena and foreshore redevelopment by Ashton Raggatt McDougall. These are all projects that have already changed the way Perth is “read” and experienced. Perth is changing, despite itself, and concerted debates and discussions over its future development, stimulated in no small way by the former Government Architect, Professor Geoffrey London, must be welcomed as the beginning of a fertile period of development for the city. 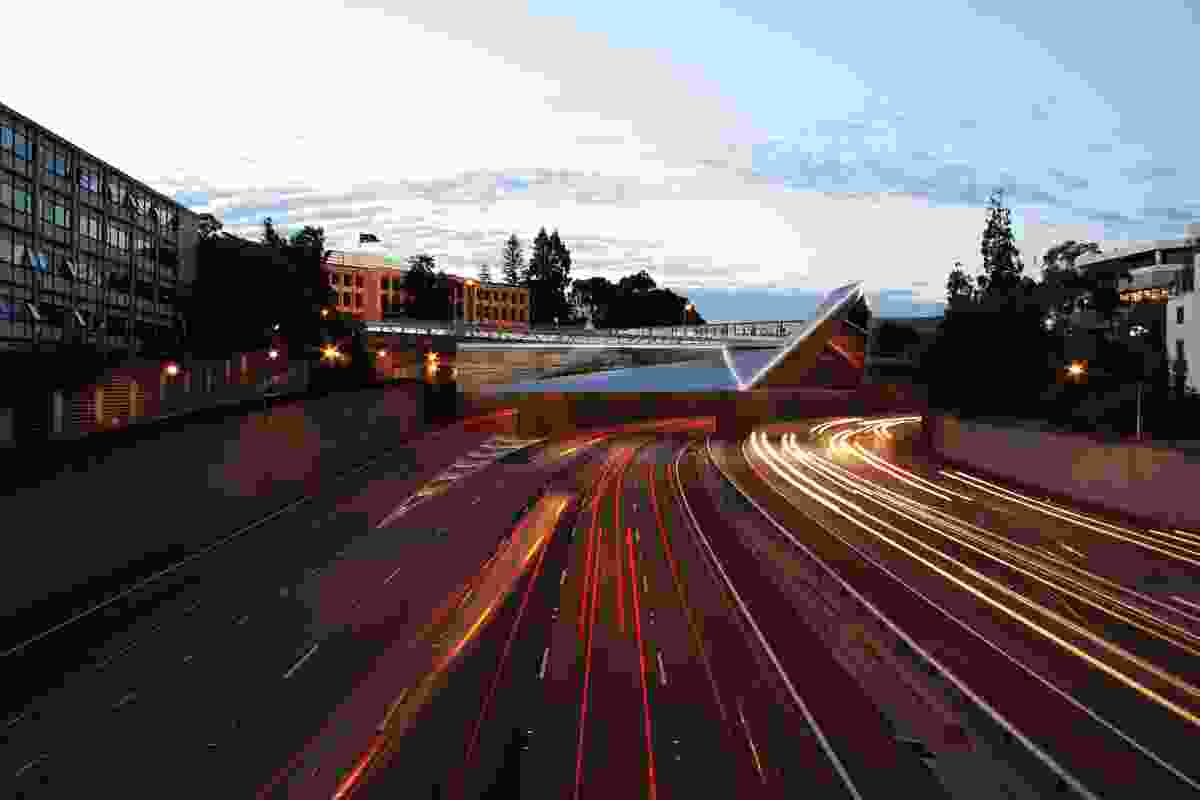 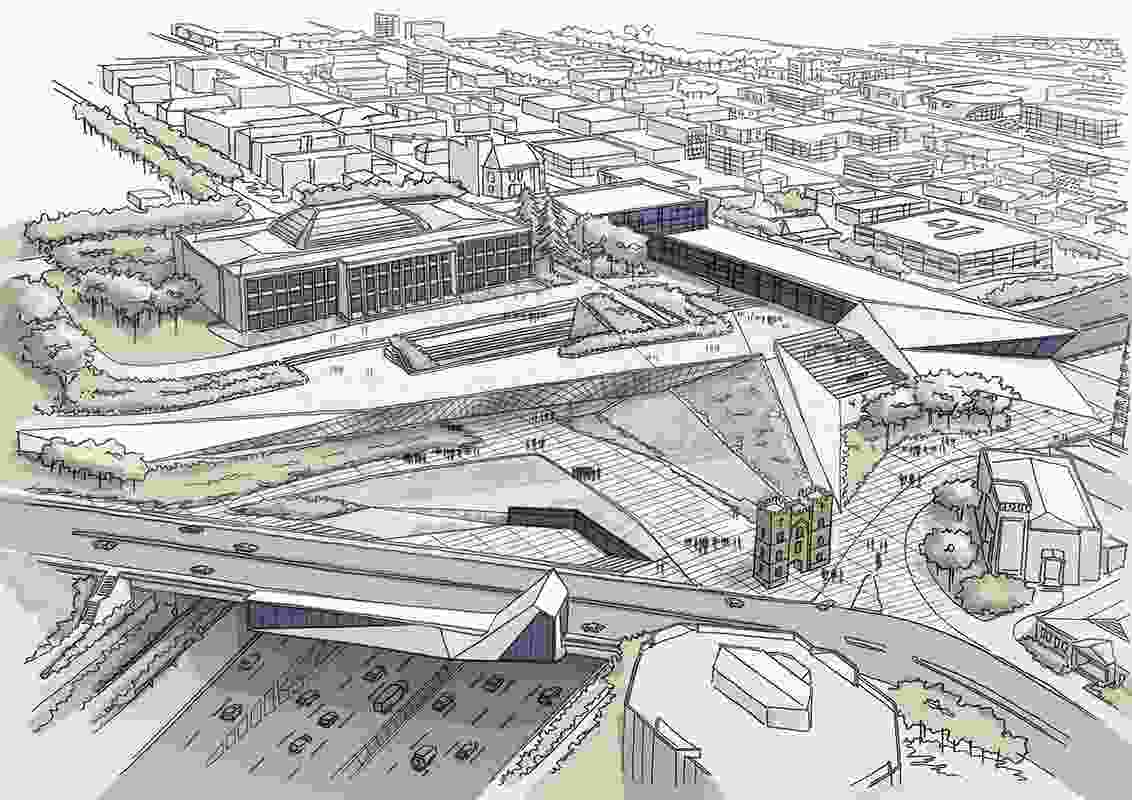 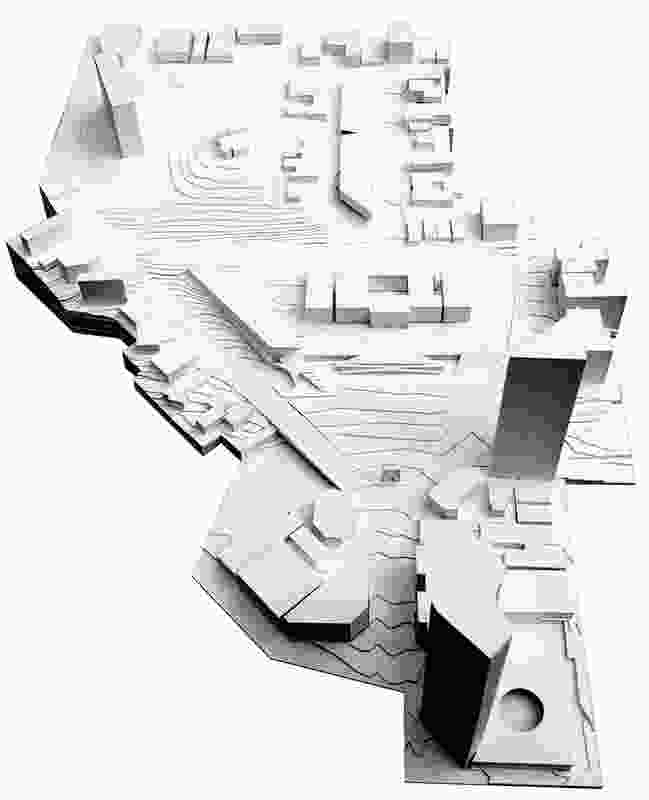 Model of Pendal and Neille’s “restrained but elegant” proposal for a new parliamentary forecourt, part of the Iredale Pedersen Hook scheme. 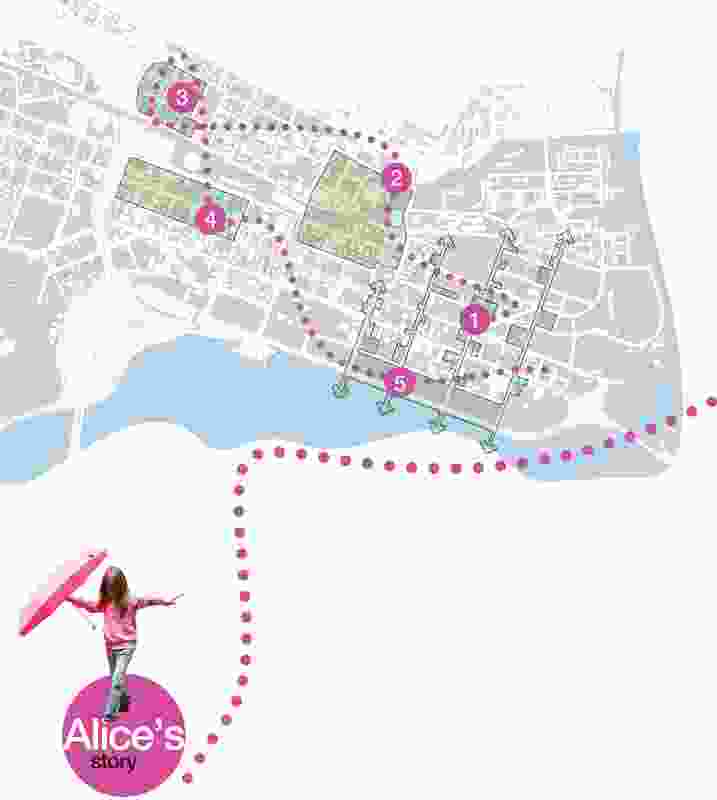 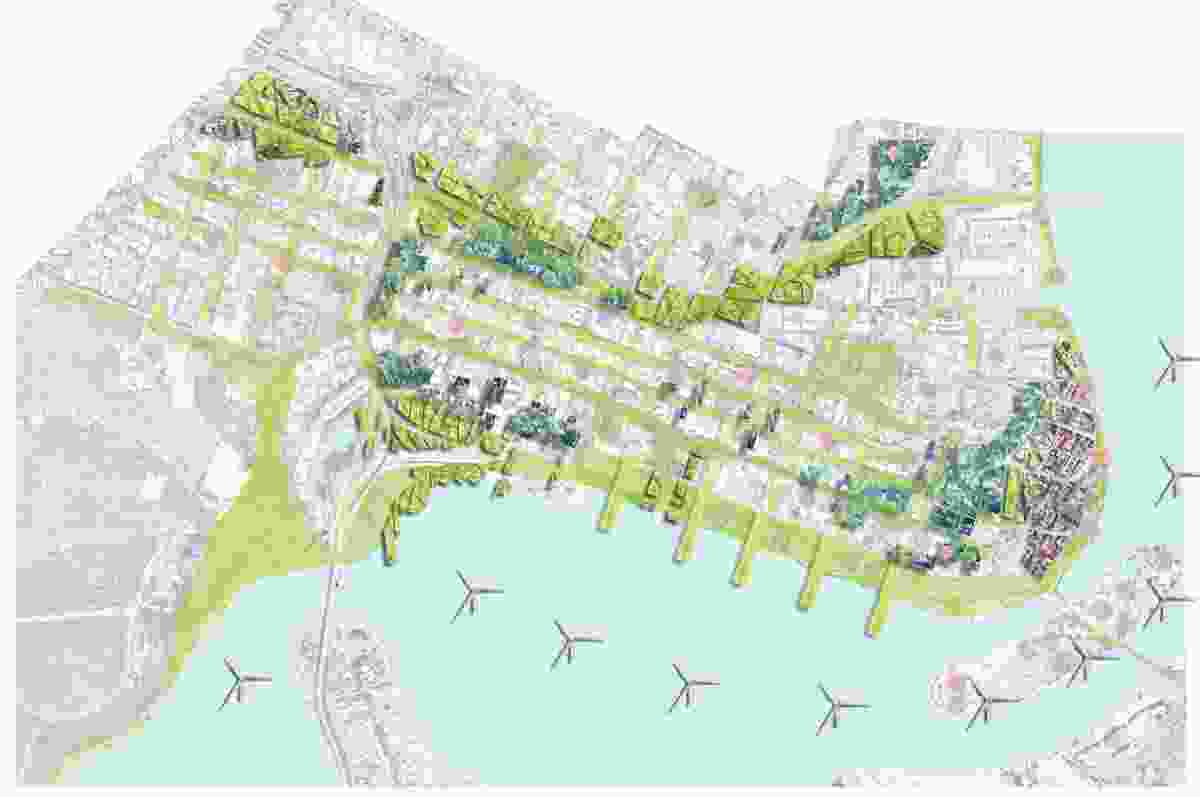 Perth Green City by Hassell with AECOM proposes a network of hyper-efficient systems to create a Metabolic City. 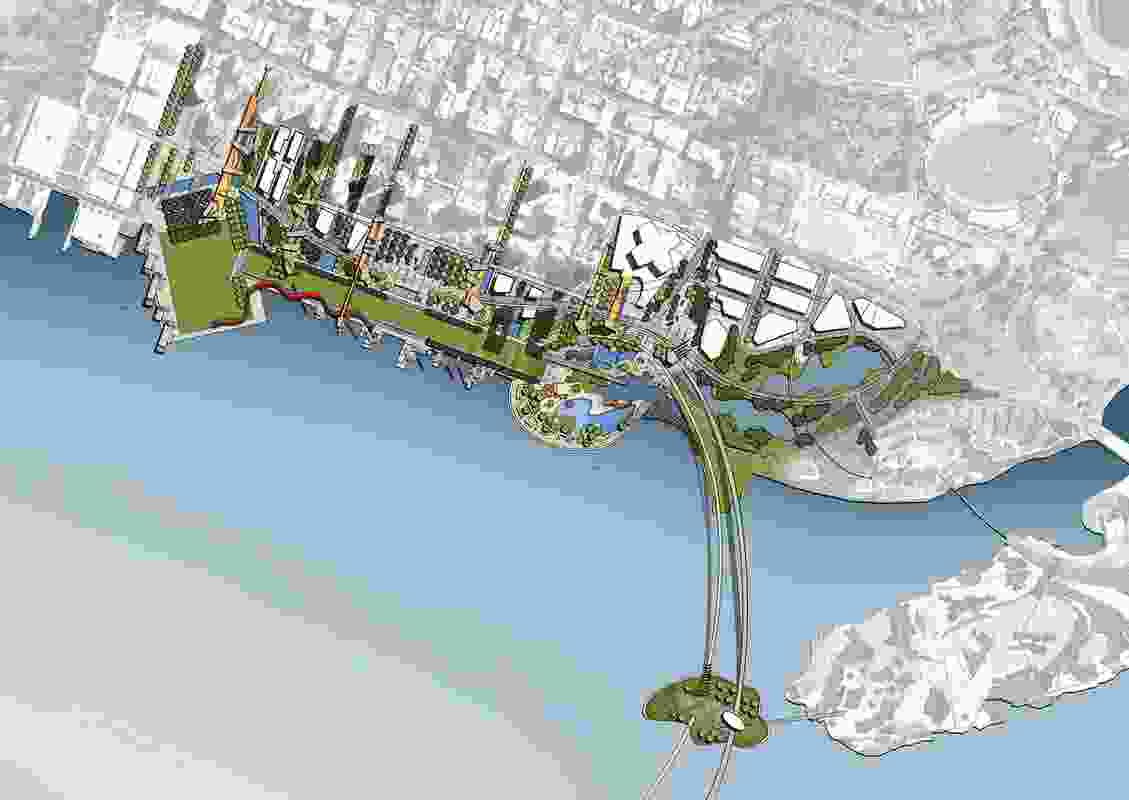 The Urbis proposal for Langley Park. 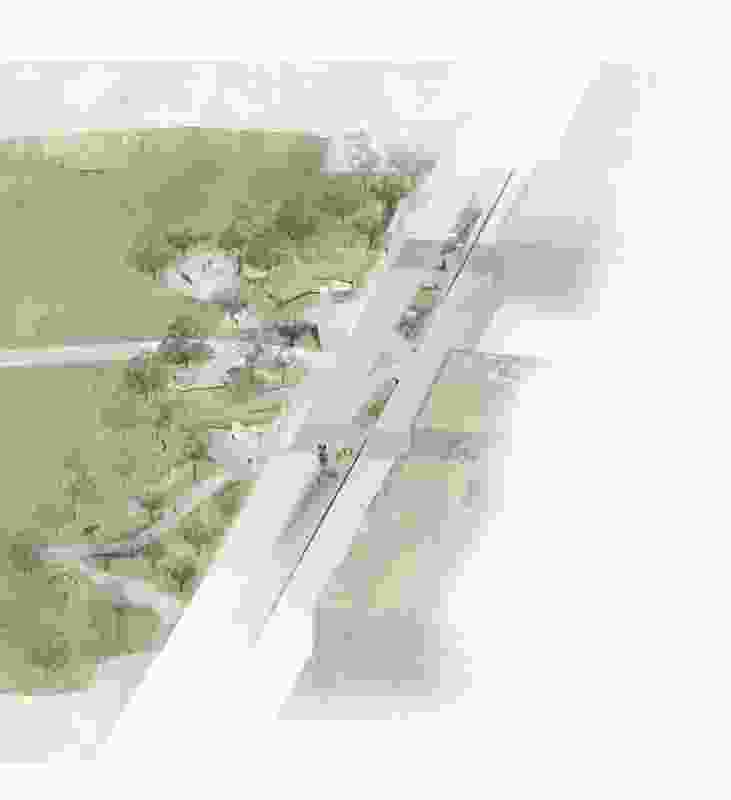