A self-initiated housing venture in Melbourne’s Fitzroy, replete with conceptual clarity, delicate form-making and extraordinary quality of finish, is a rare counterpoint to the uniformity of multiresidential development.

The south facade overlooks a park and Fitzroy Town Hall. Two courtyard houses occupy the top floor, their courtyards seemingly carved out of the glazing.

In a market oversaturated with glossy real estate images, it is rare that a completed apartment building lives up to its promise. This might explain why Whitlam Place has had such an impact in the Melbourne suburb of Fitzroy, with its conceptual clarity, delicate form-making and extraordinary quality of finish, both externally and internally. This gives rise to the question, how was such a project possible? The answer lies in the combination of the collaborative design process, the luxury of time and long-term site ownership, and a development model that afforded a level of control more akin to a single dwelling than a commercial building.

The design evolved through a partnership between designer-cum-developer Marcello Donati of Anon Studio and his long-time friends, architects Michael White and Ilana Freadman of practice Freadman White, and was built to exacting standards by Visioneer. The team drew upon the expertise of a network of friends and industry peers in developing the project, an approach Donati describes jokingly and in hindsight as “part naivety and part curation.”

The almost four-hundred-square-metre property was purchased in the 1980s and has remained in the Donati family, reducing the financial pressure that would come with buying Fitzroy land at its current value. Rather than sell the site or partner with a developer, Donati sought Milieu’s assistance on the sales and marketing campaign; after securing sufficient presales and equity to interest the banks, he proceeded with the development solo. As Donati was a first-time developer, this approach involved a significant appetite for personal risk. He elected to document the building fully prior to tender and to engage a builder in a lump-sum contract, in order to maintain control over the design detail in a manner more typical to high-quality, smaller-scale work. This approach placed design integrity above the perceived time and cost efficiencies of a design-and-construct contract more typical to multiresidential projects.

The development model paid off, allowing profit from the nine apartments for sale to fund the two courtyard houses in the sky that were retained for Donati and his sister’s young family. Removing the need to turn a profit enabled greater investment in the build quality. While this model of self-initiated housing was used for luxury apartments here, it could translate easily across scale, budget and type, with particular relevance to an asset-rich ageing population looking to downsize “in place.”

Without any formal ground rules for the working relationship, the collaboration between Donati and Freadman White was organic. The trio engaged in wine-fuelled charrettes, iterative testing of ideas and intense design review sessions. While the multiresidential typology is typically characterized by compressed time frames, linear design development and limited oversight of construction, the time and control afforded to “get things right” at every stage of the project enabled an extraordinary degree of rigour and conceptual development that is evident in the physical outcome.

The simple and elegant plan was set early on, to exploit views across the park to Fitzroy Town Hall to the south and accommodate likely future development to the north. While the internal planning was approved before the implementation of Victoria’s Better Apartments Design Standards, it passes most requirements with flying colours, with a majority of dual-aspect, cross-ventilated apartments and generous ceiling heights of 3.2 metres. The south-facing apartments at each level are kept shallow, with a broad width and extensive glazing. Balconies are shallow at 1.6 metres, shy of the Better Apartments Design Standards but designed to prioritize natural light. The mirrored light wells of the bedrooms against the party wall are kept intentionally compact to prioritize amenity in the living areas. Interestingly, the generous quality of planning and views to the town hall led to the apartments with south-facing bedrooms selling before those with bedrooms facing east and west.

Freadman White describes the form-making process as a game of sculpting from a solid, capped in height by the main parapet of the Fitzroy Town Hall. The varied spatial planning of the ground level, middle levels and the courtyard homes atop is expressed externally in a classical tripartite composition. The upturned arches provide a plinth, the “waist” is clad in scalloped, copper-oxide finished precast concrete, and delicate steelwork and glass define the top.

The design process unearthed a series of architectural motifs that influenced both developer and architect, and humanized the robust form with moments of carefully controlled whimsy. Every incision in the concrete form is carefully considered, from the band of horizontal openings sliced into the south elevation to the animation of the east and west facades with playful bay windows, referencing Marcel Breuer’s seminal design for the Met in New York, and an ornamental gutter spout inspired by Le Corbusier’s projects in Ahmedabad, India. The brass window shrouds and copper ventilation grilles will age gracefully. The copper oxide finish was an intentional homage to Nonda Katsalidis’s Melbourne Terrace Apartments, albeit in an applied rather than integral form, following lessons shared by Katsalidis himself.

For the scalloped concrete facade, prototyping led to the novel use of PVC pipes as form liner, which proved more cost effective and flexible than proprietary products. These monolithic planes of patinated precast to the east and west act as proud bookends to the park, while the transition to the glazed south elevation at the top floor playfully exposes the mitred edge of the precast panels. The glazing of this level steps around two geometrically distinct courtyards, modulating the upper form, while the glazing’s fine detailing provides a canvas for dancing reflections of eucalypt foliage. Neighbouring developments – one by Edition Office and another by Freadman White – complement the design, and it becomes clear that Whitlam Place works beautifully both as a park-side object and as part of a street-wall ensemble.

The ground floor at the park’s edge is perhaps the most challenging aspect to resolve in a project like this, with apartments where perhaps a small bar or office might have contributed more life to the street. However, developer and architect solved the arrangement with flexible planning and generous ceiling heights, configured to allow dual use or adaptability over time. This invitation has indeed been taken up – one buyer has purchased a second apartment to operate as a psychology studio at the Napier Street frontage.

While the building does not incorporate any dedicated communal space, the resident community, and their dogs, have formed a strong bond already. Donati engaged intending owner-occupiers at frequent milestones throughout the build for celebratory champagne, and some cheekily took to regular weeknight “break-ins” to inspect progress. Donati speaks of having a nothing-to-hide attitude throughout the sales and construction process, owing to his shared interest in delivering a quality result. This vested interest produced a transparent and trusting relationship, a critical component of the transaction for owner-occupiers making a significant investment in a long-term home.

The care evident in the design process lives on beyond the project’s completion – Donati’s sister heads the self-managed body corporate, and dedicated gardening has been undertaken including training creepers along the south facade to the park, as well as the civic offering of seasonally planted flowers in a narrow garden bed to the street.

Owing to the extraordinary concrete finishing by the builder, the basement parking structure has taken on a life as a multifunctional space, accommodating Donati’s famed food and wine events, while space under the ramp has been annexed with future plans for food experimentation. Initially attending the events as guests, residents are now concocting their own plans for basement music recitals and other cultural events. When your basement concrete is finished with the precision of a Swiss bathhouse, perhaps the solution to communal space is simply to sell your car.

Ilana Freadman of Freadman White will present Whitlam Place at The Architecture Symposium in Sydney on 24 September. For more information and tickets, go here. 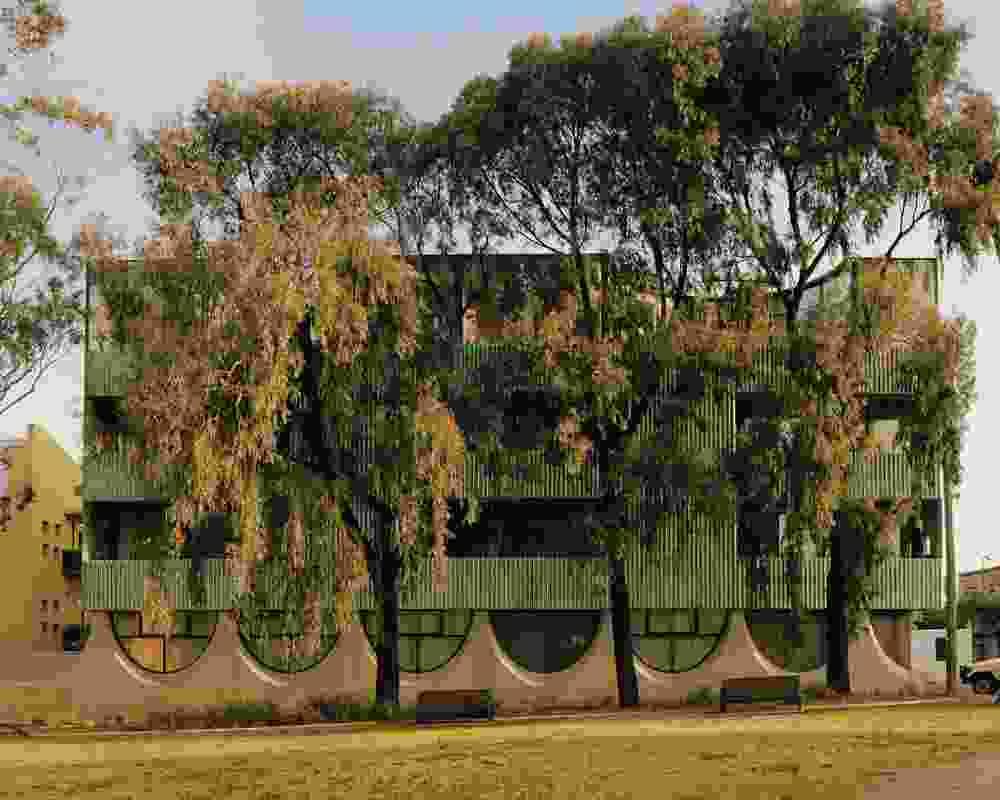 The south facade overlooks a park and Fitzroy Town Hall. Two courtyard houses occupy the top floor, their courtyards seemingly carved out of the glazing. 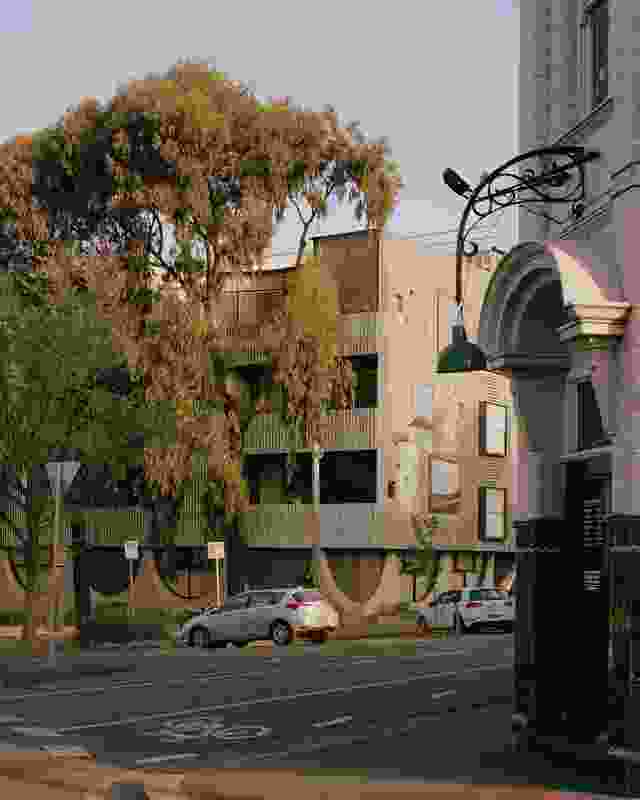 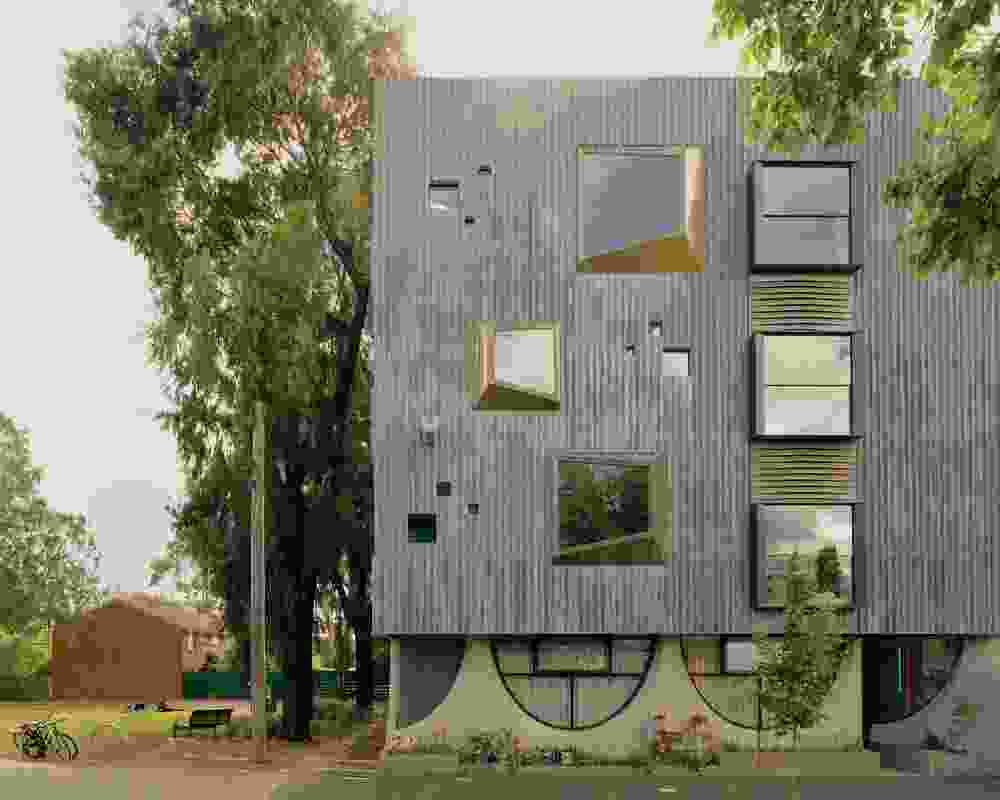 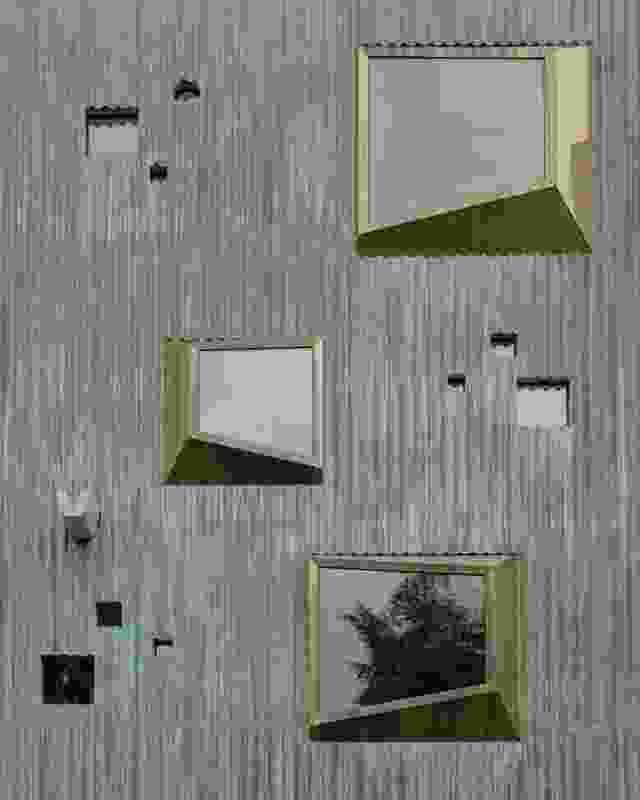 Located in the inner-suburb of Fitzroy, Melbourne, Whitlam Place is an apartment development initiated by designer-cum-developer Marcello Donati and designed in partnership with Freadman White. 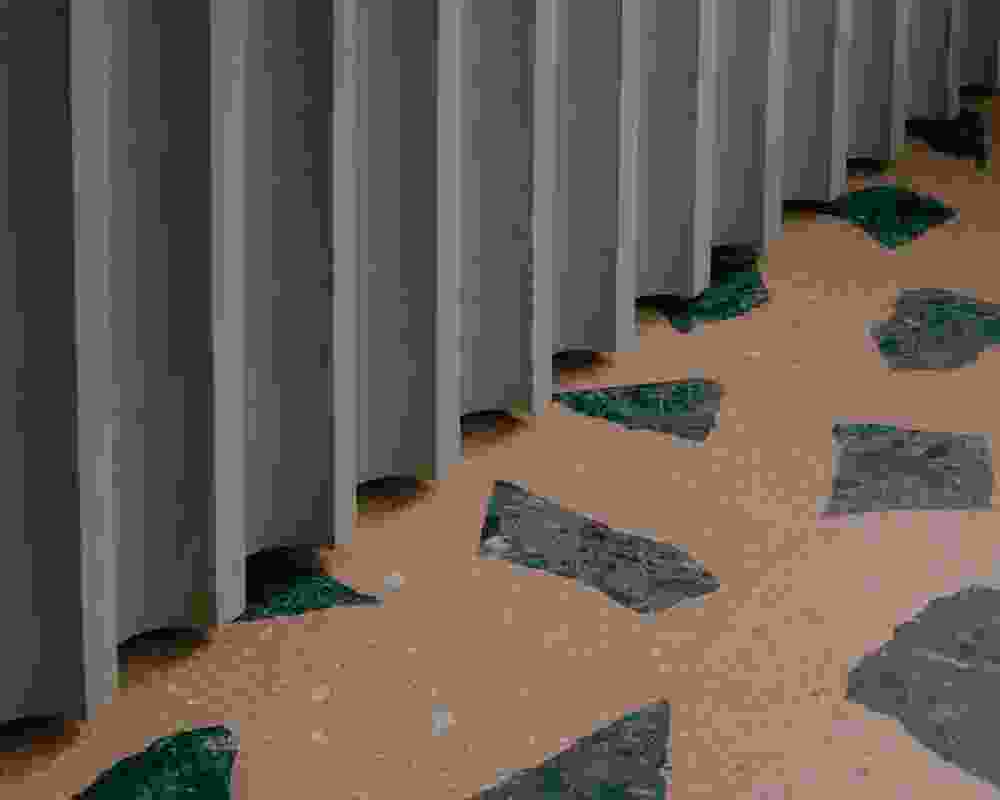 The scalloped precast concrete that characterizes the facade continues in the interior circulation spaces.

Although there is no dedicated communal space in the building, circulation spaces are memorable and include a custom neon lighting installation and pink and green terrazzo flooring in the entry. 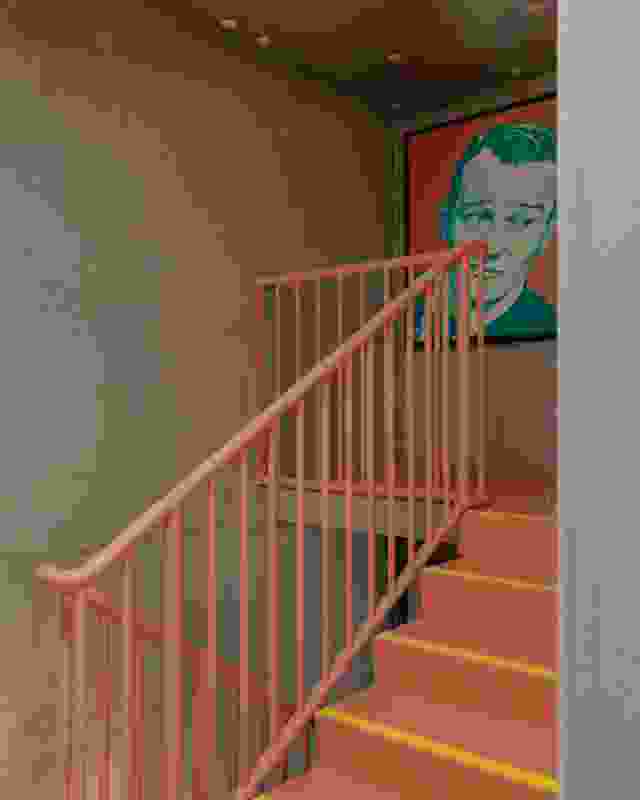 Although there is no dedicated communal space in the building, circulation spaces are memorable and include a custom neon lighting installation and pink and green terrazzo flooring in the entry. 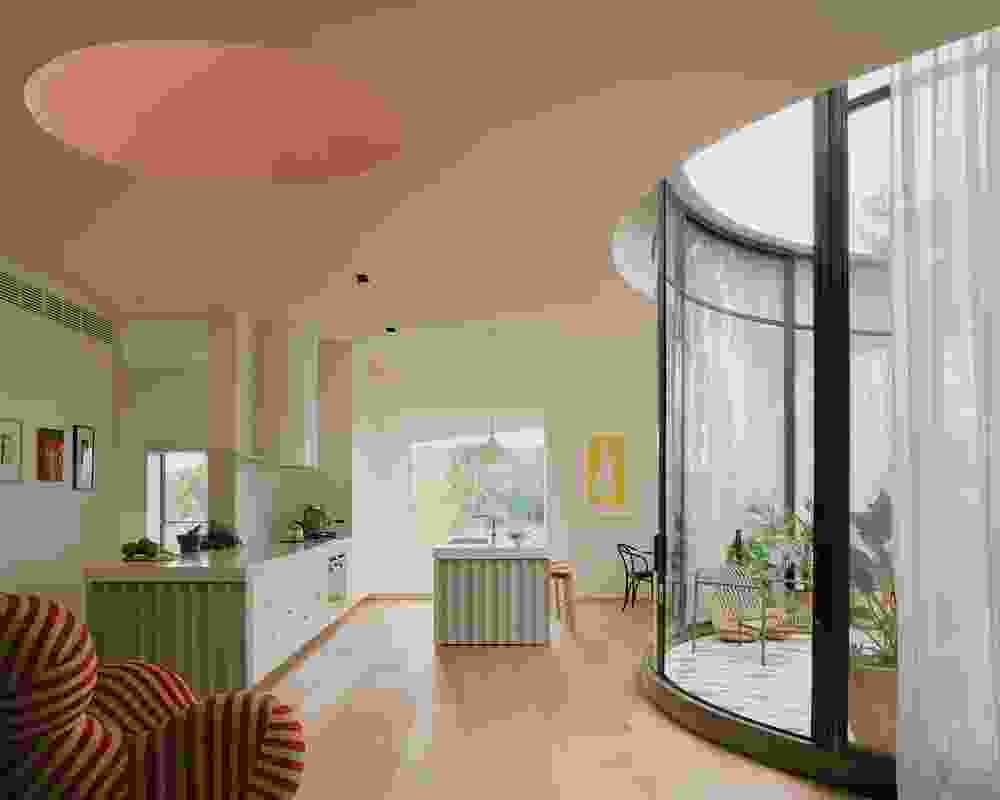 Donati’s own apartment on the top floor features a circular courtyard. The development model for the project directed the profit from the sale of the nine apartments on the lower floors into funding for the pair of courtyard homes. Artwork: Brent Harris 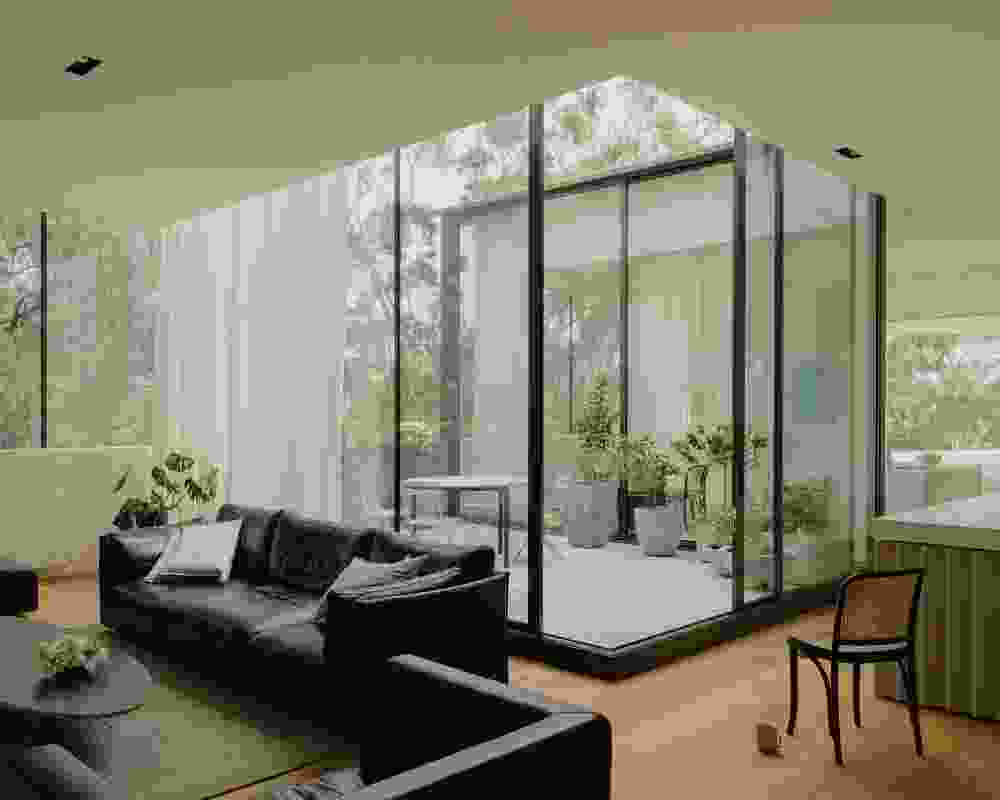 The second in the pair of “courtyard houses in the sky.” The differences between the two courtyard homes reveals the level of customization in the project. 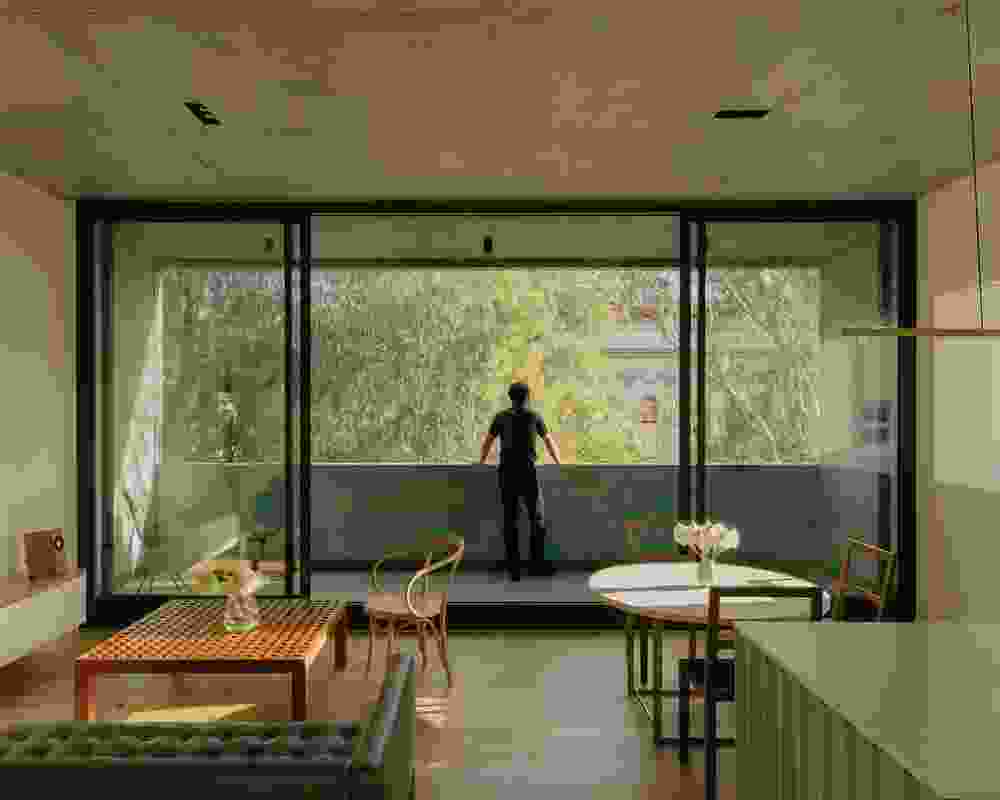 South-facing apartments overlook the Fitzroy Town Hall and the established trees in the adjacent park.