Who wants to be a ‘woman architect’?

In a recent article published on Dezeen (originally published in Danish on Politiken), Danish architect Dorte Mandrup argued that to single out female architects in lists and exhibitions was “a step in the wrong direction,” and “creates the distinct feeling of being second class citizens in the business.” Her article has sparked a flurry of conversation about the value, or otherwise, of terms such as “female architect” and “woman architect.” Of course, all architects want to be known for the quality of the work they do and not their gender. Yet despite their best efforts, women architects are not always in control of how others see them. In this context, Karen Burns revisits her 2012 reflection on the complex interactions of identity, culture and individual agency in architecture.

Does the term “woman architect” render women in architecture as second-class citizens in the business or could it be used as an act of political activism to dramatize inequity?

Is the term “woman architect” pejorative or useful? Are single-sex prizes “sexist”? These questions have returned to prominence following the publication of a recent essay on Dezeen. I am both for and against the term “woman architect.” This phrase has no fixed meaning. The political charge lies in the use of the term and who uses the description and in what context.

My objection to the label “woman architect” is shaped by concerns with language and identity. I rarely use the term “woman architect,” opting instead for the unwieldy phrase “women in architecture.” I don’t like the description “woman architect” because it implicitly genders the architect as male. Simultaneously, the architect’s masculine sex disappears or is disguised behind the word “architect”; it is the “woman” part of the phrase that becomes identified with a gender. By using these descriptions we reinforce visible and invisible patterns of gender norms.

Some women in architecture refuse to use the phrase “woman architect” for other reasons. In 2006 Architecture Australia commissioned responses to Paula Whitman’s Going Places, a report on women’s career progression in the architecture profession. Rachel Neeson, a director of Sydney-based practice Neeson Murcutt described the intersection of gender and architecture in these terms:

I don’t identify myself particularly with my gender – I don’t think of myself specifically as a “woman architect” – and I’m not exceptional in this respect… Like the majority of the profession, what is important to me is the quality of the work, as benchmarked against the work of peers and as measured by them – both informally with colleagues and friends, and formally via awards, publications and prizes.

I found myself nodding in agreement. Almost every day I would prefer to be described as an architectural theorist and historian and not as a woman architectural theorist and historian. Like Neeson I also value the measurement of my work by formal and informal means. However, I also undertake feminist research and work on architecture and culture, and this research pulls me in another direction, away from agreement with my everyday self and Rachel Neeson.

…despite my best efforts to be described in gender-neutral terms, I cannot always control how others see me

In my own work experience, I have sometimes, not always, been pigeon holed and judged differently as a woman (but not at my current workplace). I have experienced different treatment to male colleagues in terms of retention, promotion, earnings, access to seniority, leadership opportunities or belief that my contribution has been taken seriously. Parlour’s work, along with that of other organizations internationally, confirms that many other women also experience these forms of gendered patterns of behaviour. What I know now is that, despite my best efforts to be described in gender-neutral terms, I cannot always control how others see me.

My identity is formed in conscious and unconscious ways by culture. Our belief in individual agency – our capacity to act in the world and control our destiny – is sometimes over ruled by conscious and unconscious gender norms. Our life experiences happen in the interactions between individual agency and culture. The conflict between an individual’s desired self-description and the description thrust upon her by others is confronting. This dynamic is subject to change; in one situation an audience might not slot a (woman) architect into gender norms; in another situation they might.

Culture is a powerful force shaping individual identity. However architecture’s value systems are hard wired with beliefs in individuality and individual merit, and these values can obscure an open discussion about the power of social beliefs in shaping our professional judgements. Our education systems centre on studio training with a focus on developing individual design capacities. Student work is generally evaluated and judged on an individual basis that is assumed to be meritorious. Budding architects are trained to value individuality and meritocracy early in their training.

…when I study local systems of design prize choice and juries I find that a small group of people serve on juries, year in and year out, and that the jurors are often former recipients of prizes… Are prizes distributed purely on the basis of design merit (however determined) or do other factors come into play? These factors might include prior reputation, connections and conformity to the prevailing taste culture.

But is a merit-based culture of design evaluation (and by implication the designer) so easily managed and won? One of the most peculiar things about architectural practice is the range of non-merit based factors that determines the successful practice start up and expansion. These factors include access to the dominant socio-economic patronage group, access to capital, access to social networks, access to alternative income streams while the practice is being established, the social advantage of the old school tie or family connections, and even more personal factors – like physical attractiveness, charisma and romantic partners. I have seen radically talented architects fail in practice due to psychopathic personality traits even while their design practice and design innovation was brilliant. (You know who they are.)

The importance of merit-based rewards is built into the architectural prize system. And yet, when I study local systems of design prize choice and juries I find that a small group of people serve on juries, year in and year out, and that the jurors are often former recipients of prizes. I am not arguing that the system is corrupt – merely pointing out that it is a taste system maintained by people within the group and by new members admitted to its fraternity. Are prizes distributed purely on the basis of design merit (however determined) or do other factors come into play? These factors might include prior reputation, connections and conformity to the prevailing taste culture. Prizes are a powerful part of architecture’s reward system and confer advantages on recipients. Prizes produce distinction in a competitive market and confer public legitimation and provide publicity.

A prize specifically for a “woman architect,” such as the AJ/AR Woman Architect of the Year Award, raise questions about the desirability of the term itself, and the desirability of prizes based on the star system. We should reward other aspects of architectural practice with more prizes for pro bono work, for being an employer of choice, for producing research innovations in service delivery or for client negotiation.

A prize for women architects focuses attention on the prize and its context: forcing us to consider how reward systems work… The AJ/AR award should force us to gaze at the prize and the background problem. But the relationship between the problem and the solution is messy. And this is where fights break out about the value of single-sex awards.

If we start to think about the AJ/AR award as a political act rather than a prize like all the other design prizes we can start to see its political efficacy. A prize for women architects focuses attention on the prize and its context: forcing us to consider how reward systems work. Women-only literary prizes like the Orange Prize have been established against the backdrop of prize shortlists dominated by men or years in which women writers are entirely absent from shortlists. The AJ/AR award should force us to gaze at the prize and the background problem. But the relationship between the problem and the solution is messy. And this is where fights break out about the value of single-sex awards.

Women-only prizes can be trapped by a circular logic; they draw attention to non-meritocratic preferences such as gender that can influence short-list selection. But by building in gender as a gate-keeping device, single-sex prizes can be accused of the very thing they contest: non-meritocratic selection criteria. It becomes easy for critics to claim that a single-sex prize is sexist.

Perhaps we’re using the wrong criteria to think about women-only prizes. Single-sex awards are acts of political activism. They force judges and audiences and recipients to think about mechanisms of selection, judgement criteria and proportional gender representation in prize systems. Establishing a women-only prize is a provocative political act. It is not the same as writing anti-discrimination legislation or building consensus around policy formation. It does not seek to be ‘fair’ but dramatizes inequity, albeit in the most paradoxical way. It seeks to generate discussion and produce publicity. It may also be a useful reward for the prize winner.

For me terms like “woman architect” and women-only prizes offer opportunities to discuss the tensions, complexities and contradictions around questions of gender identity. I don’t have any straightforward answers. The meaning and political power of the term “woman architect,” changes according to context and intent. We should ask who is choosing the phrase and are the subjects who’ve been labelled with the term happy to accept this label? Context will shape the contents that are poured into the category “woman architect;” is it a positive phrase or a special, inferior category? Architecture needs a stronger public discussion around the mutability of these “identity” categories. Identity can be a powerful force for asserting political agency, as women group together to argue that women architects have experienced discriminatory gender-based norms and demand that these norms are recognized and addressed.

The conflict between the ideal of individual agency and the power of culture to shape and judge individuals was dramatized succinctly in an interview with US Congresswoman Patricia Schroeder. The Huffington Post reported that Schroeder was campaigning as a candidate in a senate race, only to be was asked whether she was ‘running as a woman’. She responded, “Do I have a choice?”

This is a slightly updated version of an essay first published on Parlour in 2012. To read the originial article, click here.

Who wants to be a ‘woman architect’? 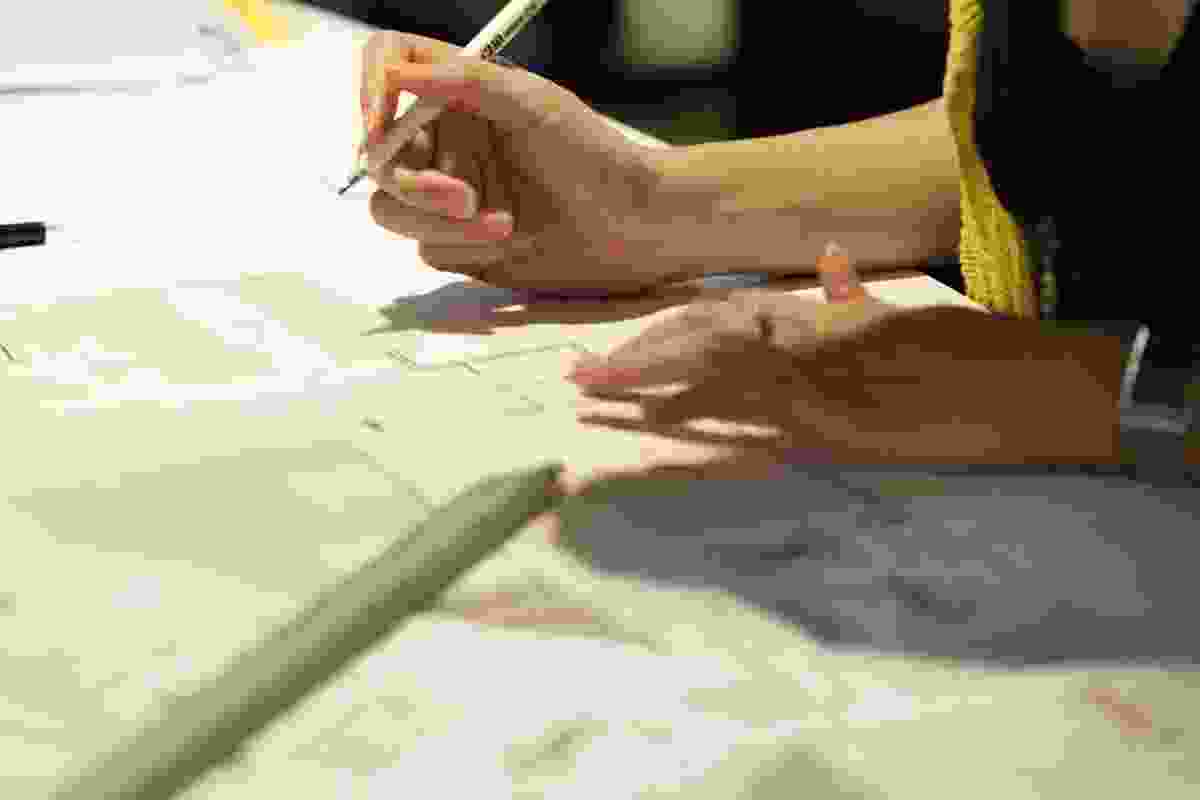 Does the term “woman architect” render women in architecture as second-class citizens in the business or could it be used as an act of political activism to dramatize inequity?