The spirit and character of a modest postwar bungalow have been retained and celebrated by its architect-owner, who has reconnected the home to its backyard.

The pitch of the new roof is followed internally to allow additional light into the interior.

In middle-ring suburbs across Australia, the modest bungalows of the postwar building boom are coming onto the market for the first time in more than sixty years, many in almost original condition. Architect Paul Curran of Push Architecture and his florist partner Nan Leutenegger’s single-storey weatherboard house, which was constructed by its original owner – a builder for the housing commission, is a variation on one of the many standard plans of the era. Paul’s fondness for the house was triggered by nostalgia for his childhood home, with its terracotta patios and aqua coloured roof trims.

Raised on a brick plinth with a terracotta tile roof, the house has “good bones” and had been meticulously maintained. Constructed from hardwood framing with mortice and tenon joints, it features a few special details, including toilet vent pipes fashioned from jam tins with a handmade circular pyramidal tin roof. Paul describes his desire to “dress the house up without being too fancy,” following the logic and the character of the house rather than putting the architect’s stamp on it. Small adjustments to the house have retained the original character and detail, creating more open-planned living spaces and transforming the connections between inside and out.

From the street the changes are subtle. The front patio, which was originally inaccessible, was transformed from an aesthetic set piece into a functional part of the entry sequence. The original curved concrete path was replaced by brick paving that steps up to adjust the alignment of the stairs and create a connection to the patio. One of the French doors from the back bedroom was repurposed for the patio door to the front bedroom, opening up the relationship with the garden. A timber screen with detail reminiscent of woven chairs replaced the brick wall to the south of the patio. The face-brick plinth was bagged and painted black to marry the composition of new elements, including the carport to the north, to the original composition.

Internally, the walls of the entry corridor were removed to create an open-plan living, dining and kitchen space. The original bathroom was reconfigured and although the old terrazzo floors were not salvageable, the original basin and bath were re-used in the ensuite that replaced the middle bedroom. The rear wall to the bathroom and kitchen was moved 1.2 metres to the west, to allow for a small study at the rear and to make more room for the dining and kitchen area.

Originally, the only access to the backyard was via a door off the kitchen and onto a rear patio that was enclosed with a hit-and-miss brick wall, a mesh screen and a low steel roof. The realignment of the back wall allowed the house to open directly into the backyard. The original patio apron was extended by a brick plinth that steps down to the garden, removing the need for a balustrade. A brick chaise longue fills the northern edge of the patio, with a stainless steel wire screen providing an armature for climbing roses.

The new roof over the patio provides a single virtuosic moment, which contrasts with the modest adjustments to the rest of the house. The new triangular form was born from the logic of the original roof, continuing the pitch of the northern edge outwards. The apex of the original hip is “grabbed and dragged up” to make a new diagonal ridgeline, sheltering the majority of the patio under its soaring form. This quietly heroic gesture is celebrated by exposing the underside of the terracotta tiles, recalling the detail of the original garage beyond.

The western edge of the garden backs onto a park, and the tall patio roof allows for this borrowed landscape to become part of the new indoor and outdoor living spaces. From the brick chaise longue you can look up into the thirty-metre-high gum trees and out into the park. Vertical battens along the upper portion of the western edge protect the spaces within from the afternoon sun. The virtuosity of the roof is accentuated by the coffered ceiling in the kitchen, allowing additional light into the interior and further reinforcing the connection between inside and out.

The garage in the backyard was subdivided in two, creating a pair of studios. The original hinged timber garage doors were repurposed and relocated to create sliding doors, opening out onto a new brick patio that steps into the garden. Parking was moved to the street, under a black, steel-framed carport, which allows a diagonal view through the corner casements of the dining and living rooms back out to the street.

Respectful, yet quietly ambitious, the house embraces a fond sense of nostalgia that is unrestrained by conservative sentimentality. Simple but precisely executed moves invert the inward-focused rooms to create a nuanced sequence of spaces that transform the interior into an extension of the garden. 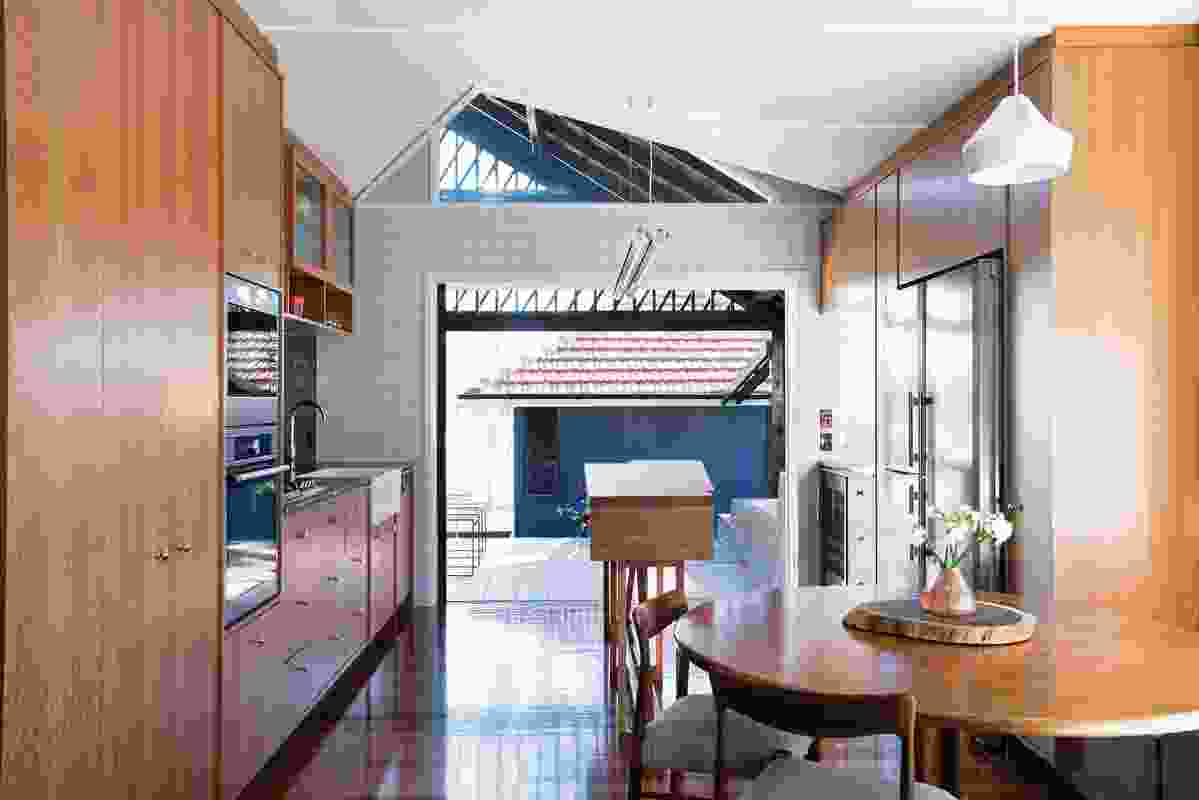 The pitch of the new roof is followed internally to allow additional light into the interior. 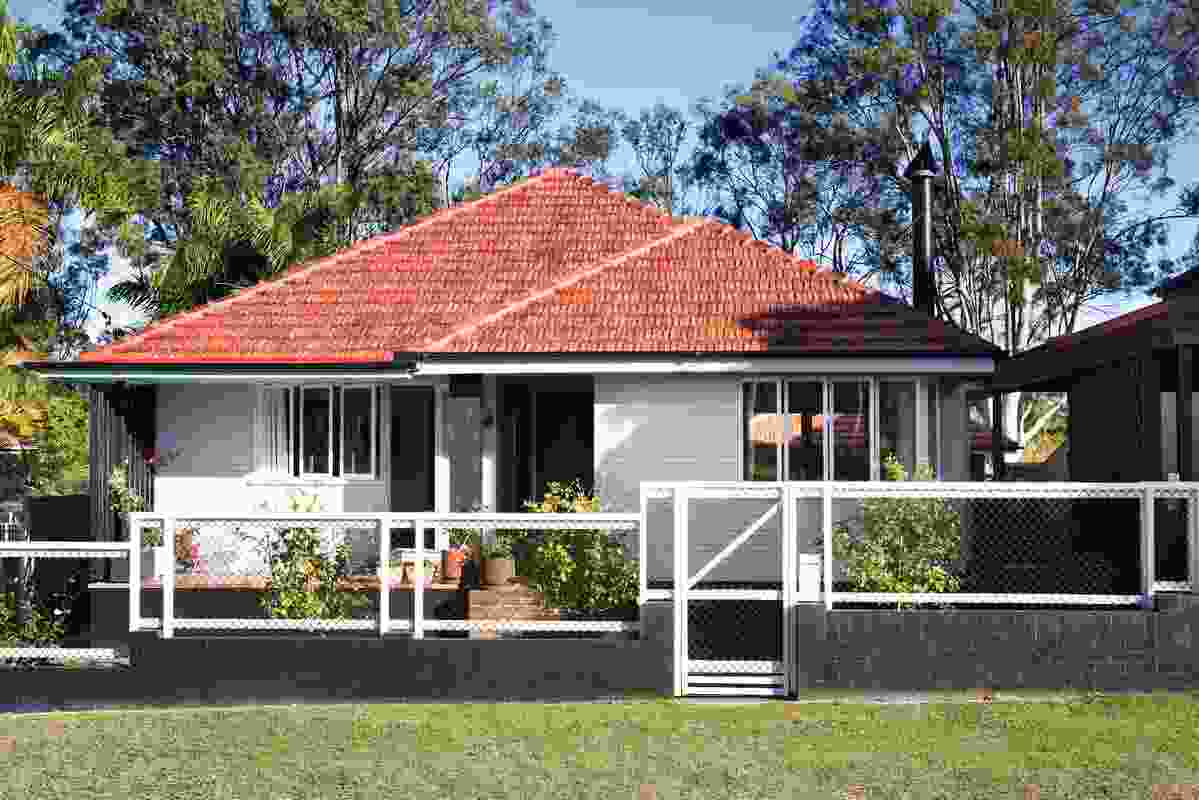 The “good bones” of the modest postwar bungalow have been meticulously maintained. 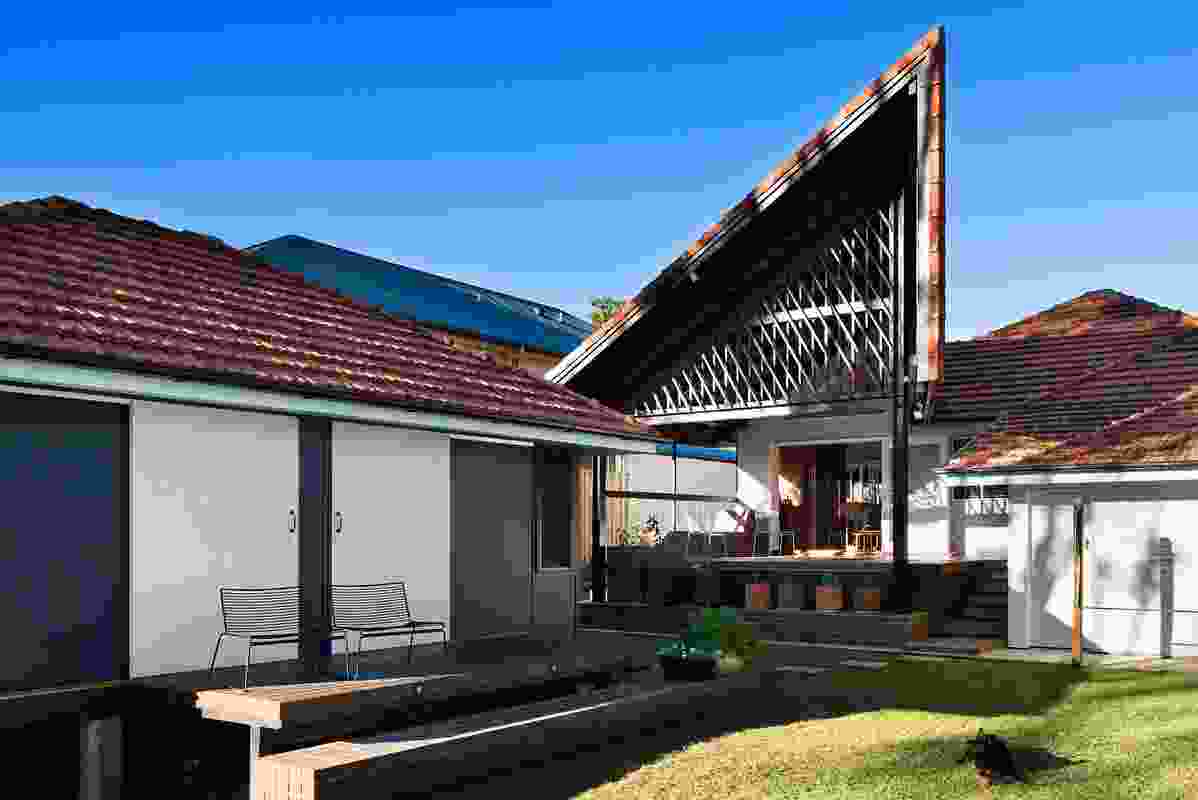 The new triangular form was born from the logic of the original roof, continuing the pitch of the northern edge outwards. 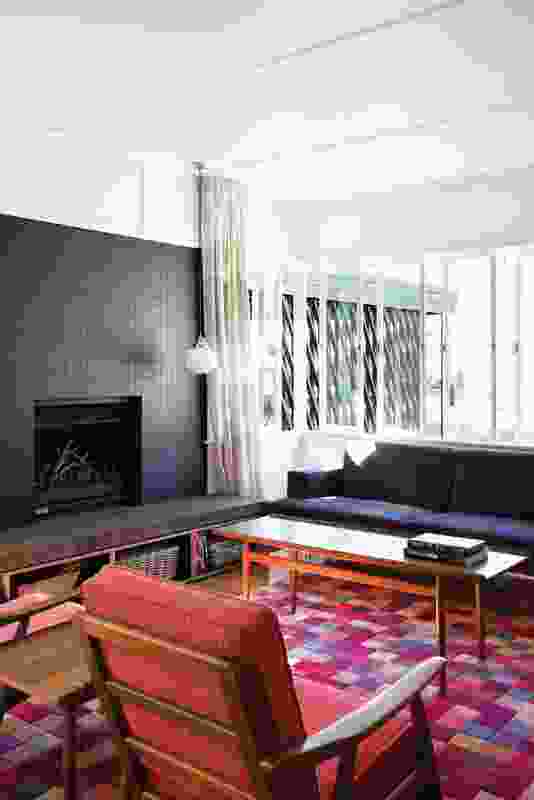 Original character and detail have been retained in the opening up of the living spaces. 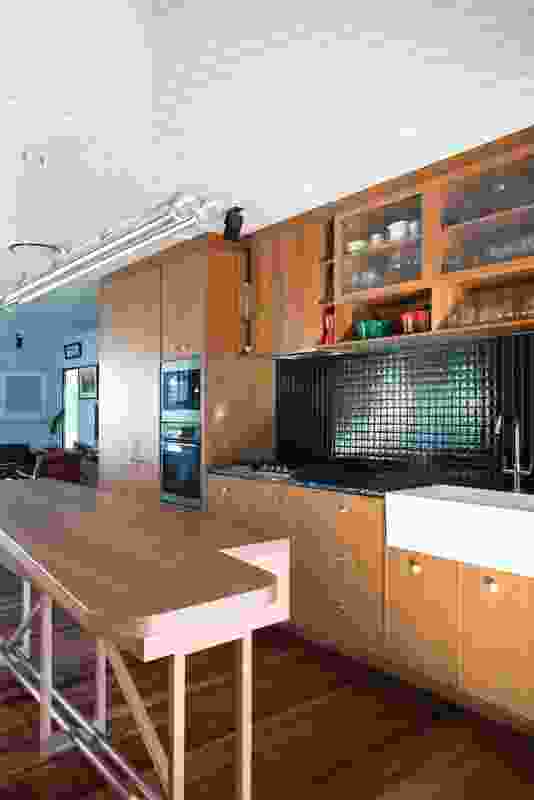 The kitchen features a custom-designed island bench and pendant light above. 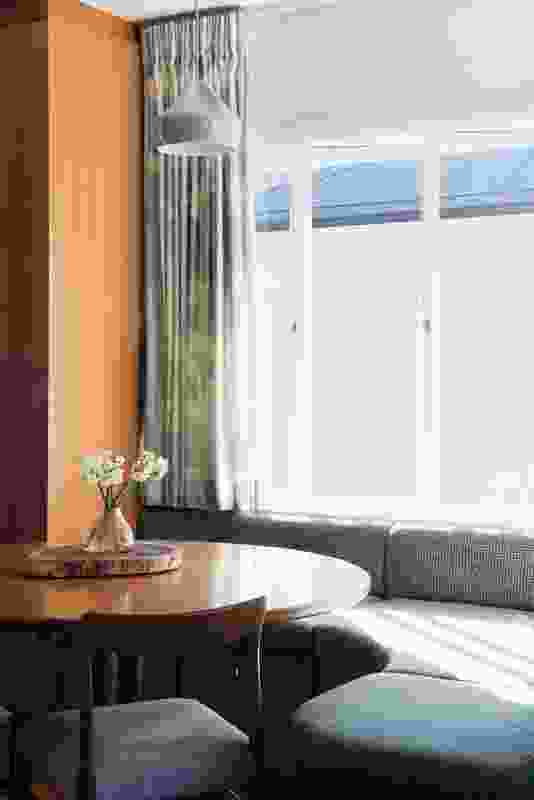 A dining nook in the northern corner of the kitchen is filled with natural light. 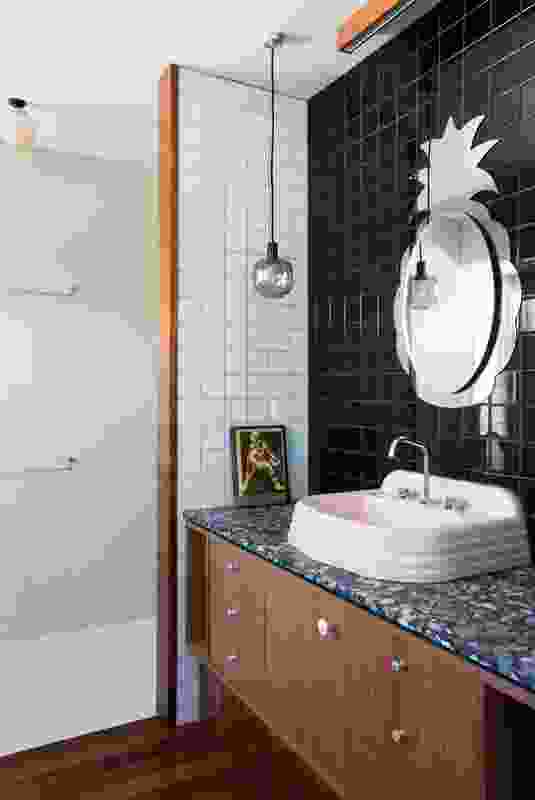 The basin and bath from the main bathroom have been re-used in the new ensuite. 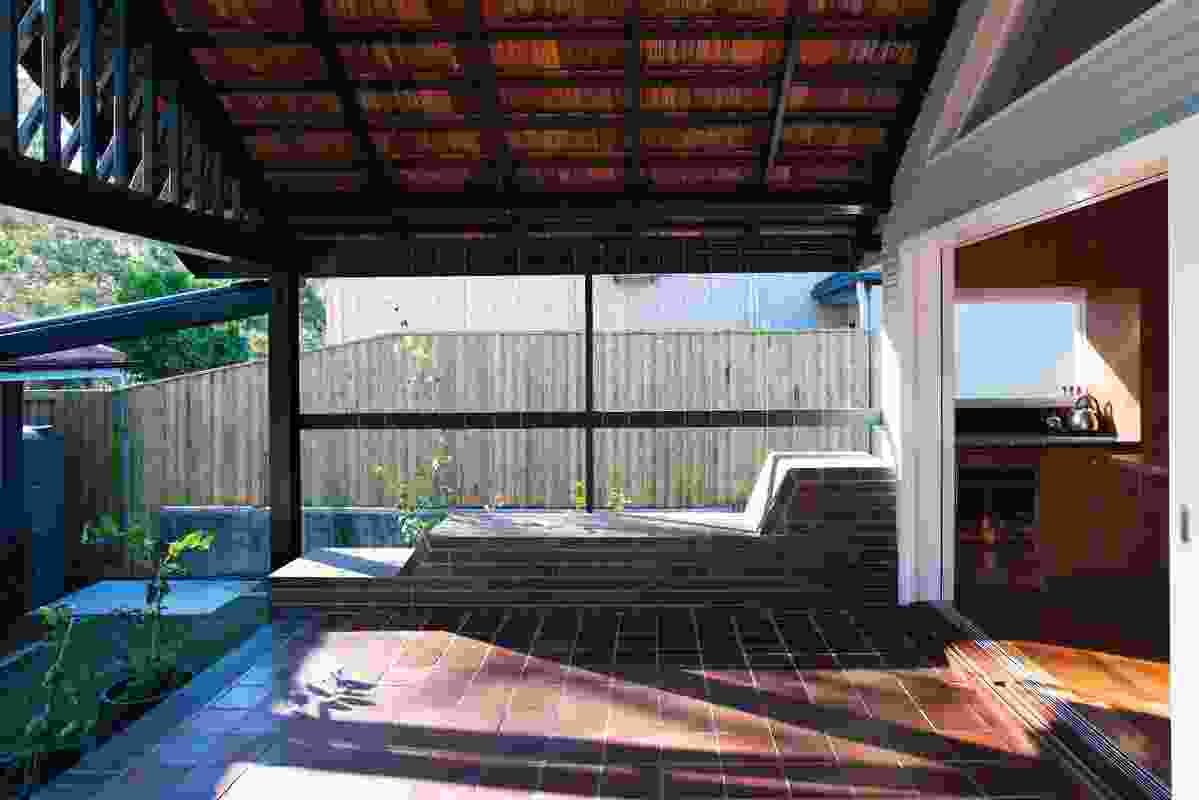 A brick chaise longue fills the northern edge of the patio, with a wire screen providing an armature for climbing roses.