On our way to the Venice Architecture Biennale in 2008, we visited the Swiss architect Peter Zumthor at his Haldenstein studio. Zumthor, who would win the Pritzker Prize the following year, described a witchcraft memorial he was designing for a site in the Arctic Circle.

Four years after that conversation, we flew to Vardø over the snow-capped mountains, blue-grey fjords and glacial lakes of Norway’s far north. Our conversation and thoughts were still simmering from ‘Crafted,’ the 12th Alvar Aalto Symposium, which we had just attended, and from all of the Aalto buildings in Finland that we had been so lucky to see in the few days before.

We had travelled almost 14,000 kilometres north from our studio in Noosa Heads, Queensland, to a latitude of 70 degrees north, within the Arctic Circle. From the Norwegian mainland, we were looking northeast across the icy Barents Sea to the windswept and treeless island of Vardø.

Amid distant pitched roofs and timber-clad houses in earthy pastel tones, two structures pulled focus in the late summer evening light. Scaled to the vast landscape, the white spire of Eyvind Moestue’s Vardø church (1958) and the white horizontal line of the Steilneset Memorial (2010). The Steilneset Memorial, a collaboration between Swiss architect Peter Zumthor and the late French-born, American artist Louise Bourgeois, is a beautiful object and was our reason for journeying to this far end of the earth.

Our pilgrimage to the port town of Vardø, on this month-long Nordic architecture sojourn, recalled our memorable visit to Peter Zumthor’s studio. He had showed us through his projects and through myriad exquisite models, and explained the design of a witchcraft memorial he was designing with an artist in far north Norway. Now we stood looking across the water at all 125 metres of its distinct skeletal line, which underlined the town of Vardø at the edge of water and land, 64 kilometres from the Russian border.

We descended 88 metres below sea level to drive the three-kilometre sub-sea tunnel to Vardø in a scene reminiscent of James Bond’s Dr. No.

In a near-freezing four degrees, we arrived at 7 pm on a misty, sleety evening, illuminated by an omnipresent half-light that stayed well into the dawn. Our walk through the narrow streets after dinner was heralded by the eerie calls of seabirds, and most of the houses we passed had lamps glowing in their square, curtainless windows, assuring us we were not alone on the island.

Though dressed to deal with the Arctic climate, it wasn’t long before our extremities felt the cold, but any discomfort was anaesthetized by the growing anticipation of Zumthor’s architecture over the brow of the hill.

Our town map showed us how we wanted to arrive that evening. We walked past the gates of the 1307 Vardø Fortress, through the little cemetery, past the small black and white timber Vardø Chapel and down towards the haunting site of the 17th-century Vardø witchcraft trials, where 77 women and 14 men were tried and burned at the stake in the course of a hundred years.

Seen from the cemetery glowing in the bluey half-light of the midnight sun, the Steilneset Memorial, which commemorates the 91 victims (many of which were indigenous Sami people), came into view as another significant underline beneath the distant treeless mountains of mainland Norway, along the jagged rocky coastline.

It is a two-part composition – a long white line and a black dot, sharing the black and white colour scheme of the nearby cemetery chapel. It consists of two structures designed by Zumthor – an ‘infinitely’ long structure of bleached ‘driftwood’ frames encasing a stretched canvas cocoon and a dark glass cube.

In an interview for ArtInfo magazine, Zumthor described his collaboration with Bourgeois simply: “I had my idea, I sent it to her, she liked it, and she came up with her idea, reacted to mine, then I offered to abandon my idea and do only hers, and she said, ‘No, please stay.’ So, the result is really about two things: there is a line, which is mine, and a dot, which is hers … Louise’s installation is more about the burning and the aggression, and my installation is more about the life and the emotions [of the victims].”

After what seemed like hours wandering around the rugged site, finding some respite from the wind within Zumthor’s canvas version of the tunnel that brought us to Vardø, the bitter cold finally drove us back to shelter for the night.

If it actually got dark, we didn’t see it. We woke early, to more seabird sounds and the lapping of the harbour outside our window and to the sight of Vardø port against a magnificent crisp blue sky – a reminder of our big blue sky down under. After a savoured breakfast of ryebread, cheese and pickled herrings, we headed to the Pomor Museum, which commemorates Vardø’s Russian history. There we met with Andreas Hawkenes, after months of email exchanges, and spent the next two hours hearing about the history, politics and stories of the region. Being Vardø-born, Andreas has a true local’s perspective on the Steilneset Memorial story.

The previous night’s sleet had cleared, revealing the clearest, bluest sky, and we spent the day between Steilneset and as many vantage points as we could find on the island from which to view the memorial in context.

“Memory Hall” is a long fabric enclosure shaped like a herring fillet, supported by hundreds of bleached ‘driftwood’ frames, inspired by the remnant diagonal timber fish-drying structures that stood abandoned in nearby fields. The timber structure holds the canvas cocoon up off the ground and allows daisy-like flowers to proliferate on the rocky ground below.

Its walls, white on the outside, consist of stiff fabric stretched by stainless steel wires into a regular pattern that suggests sail rigging. Ninety-one small, square windows recessed in metal frames punctuate the walls at irregular heights. Entered via a timber ramp, the structure is light to the touch. The inner surfaces of the walls are black fabric that resonates in the wind. Each window represents a victim of the witch trials, with the details of their ordeal displayed on plaques. Ninety-one light bulbs suspended in the windows create the sense of endless movement along a torchlit corridor. This sensation is enhanced by the raised timber catwalk underfoot. The varying heights of windows and lights, the elevated walkway, and the square, with recessed views of the outer world, produce an effect as theatrical as the rest of Zumthor’s emotive work.

In stark contrast, a few metres away, a reflective black glass pavilion encloses Bourgeois’s installation, a point of high drama after the studied calm of the tunnel. The Damned, the Possessed, and the Beloved is an unforgettable vision in this rugged landscape. A steel chair centred inside a volcanic cone of off-form concrete burns perpetual flames from its seat. Seven huge oval mirrors, angled above the chair on slender pylons, twist the flames and the viewer into sinister shapes and distortions.

The timber and canvas hall celebrates the lives of those lost, whereas the glass cube expresses the horror of burning at the stake.

As well as the experiential quality of the architecture within, and its presence in the bigger landscape, the memorial was utterly moving for representing and valuing each victim as an individual. Each had their own shining light and small square window for looking inwards and looking out.

Leaving Vardø, boarding the small plane bound for Oslo, we were silent in reverie over the 24-hour pilgrimage to this memorable and poignant work by Zumthor, and over the unexpectedly touching history and geography of this magnificent Nordic landscape. 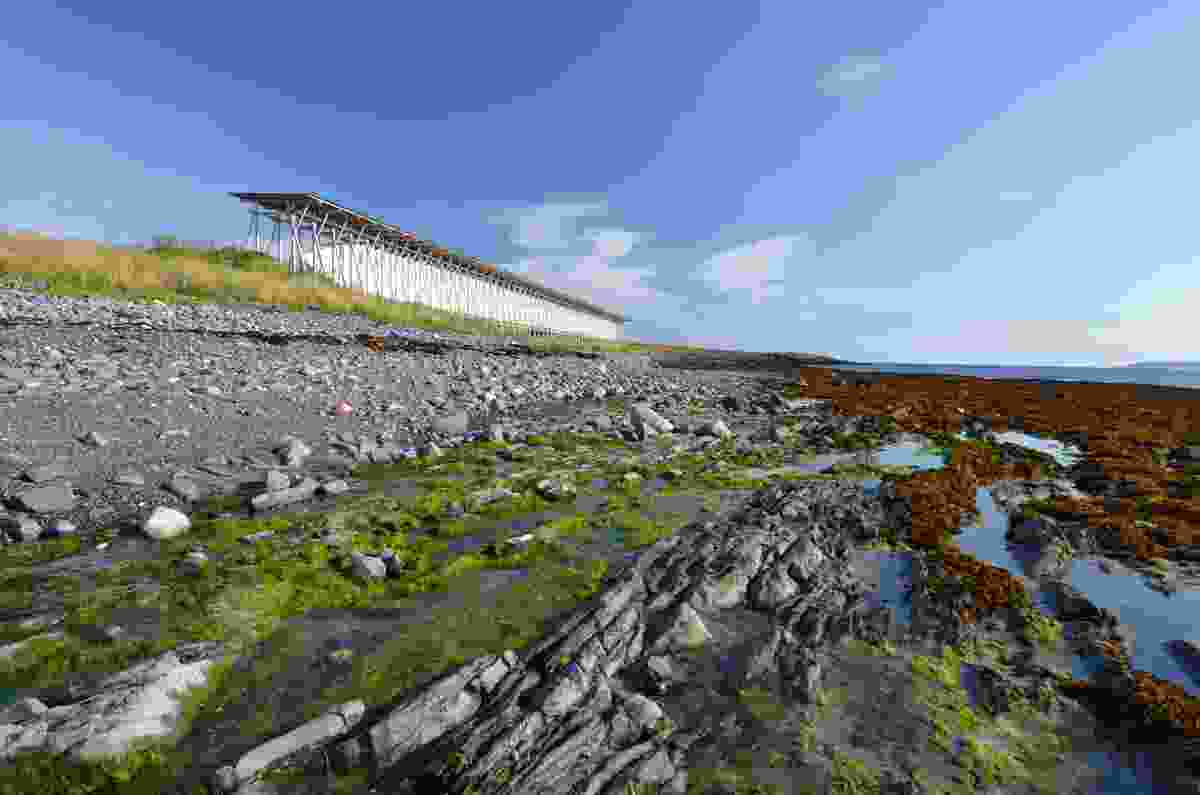 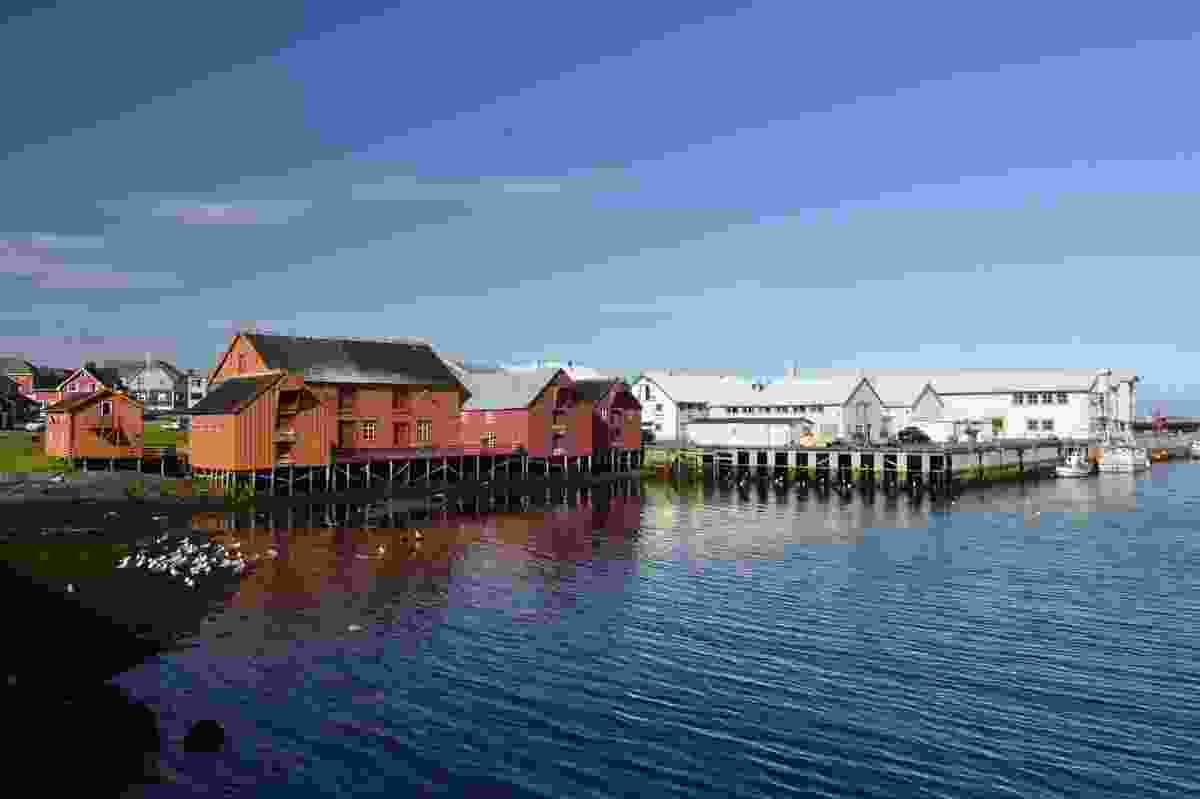 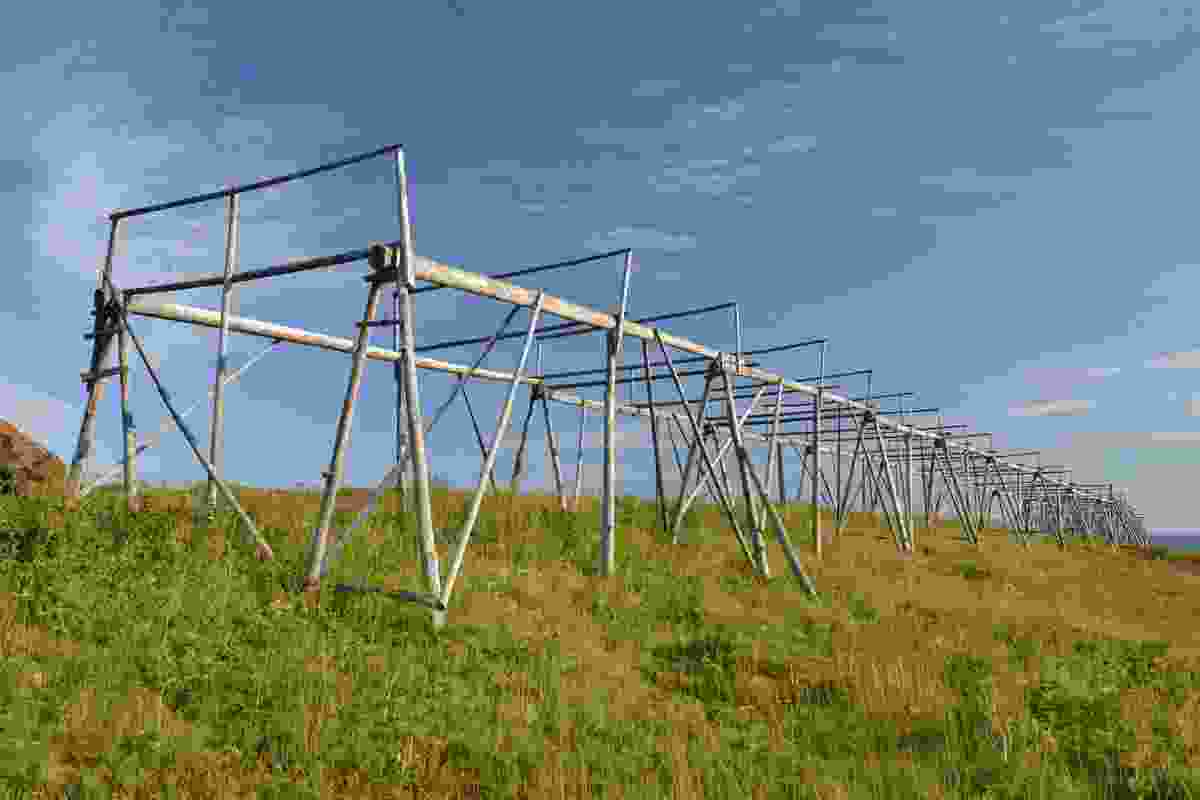 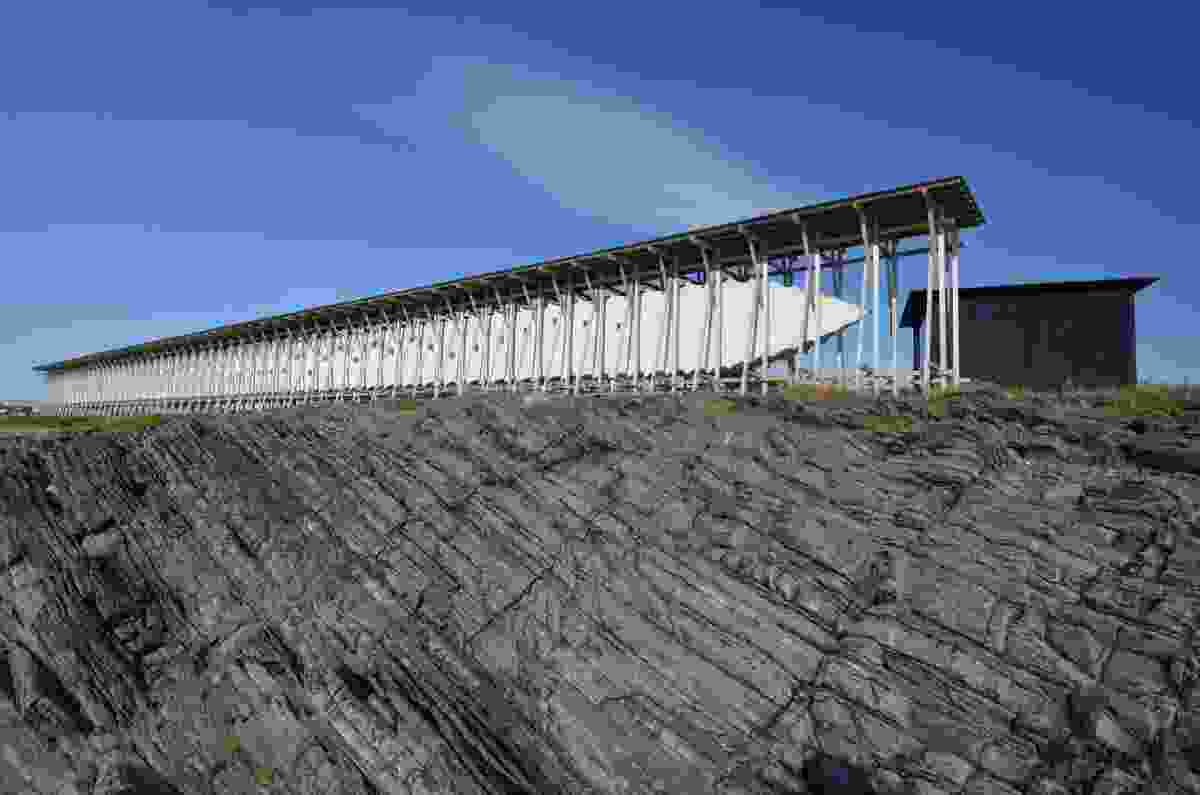 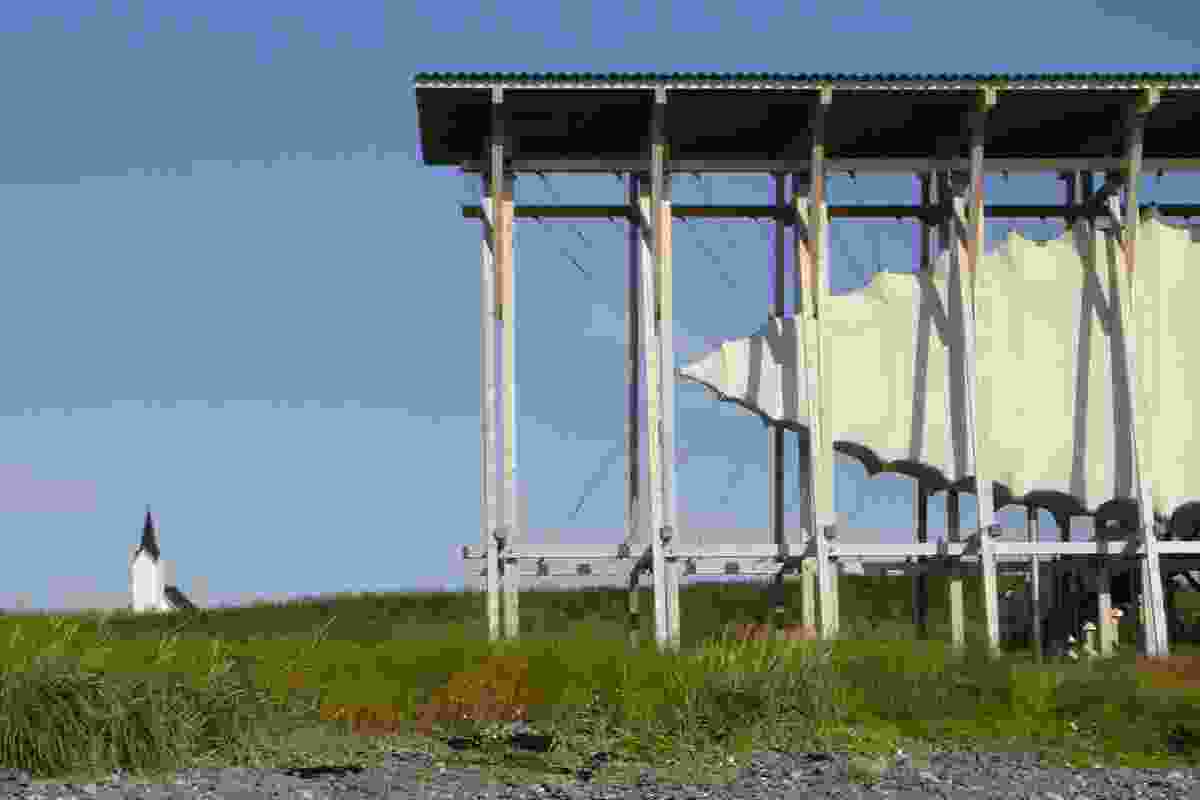 Stiff fabric is stretched by stainless steel wires into a pattern reminiscent of rigging. 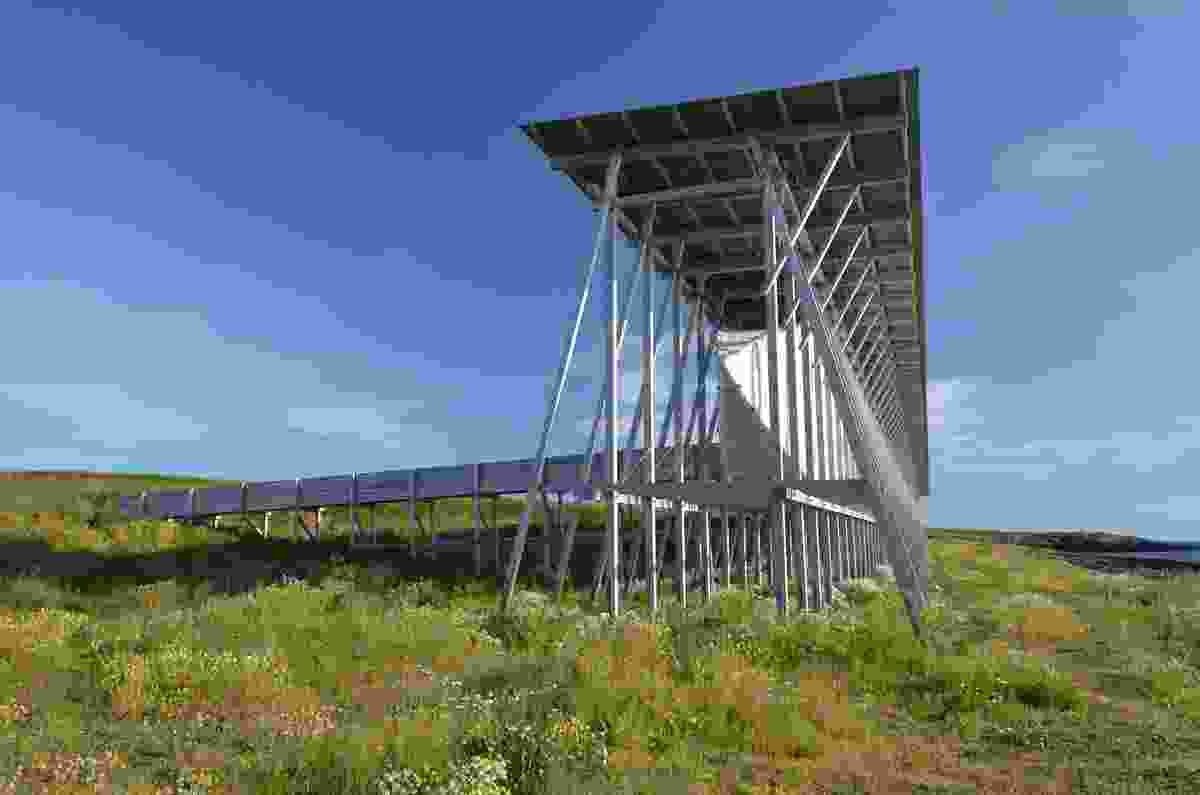 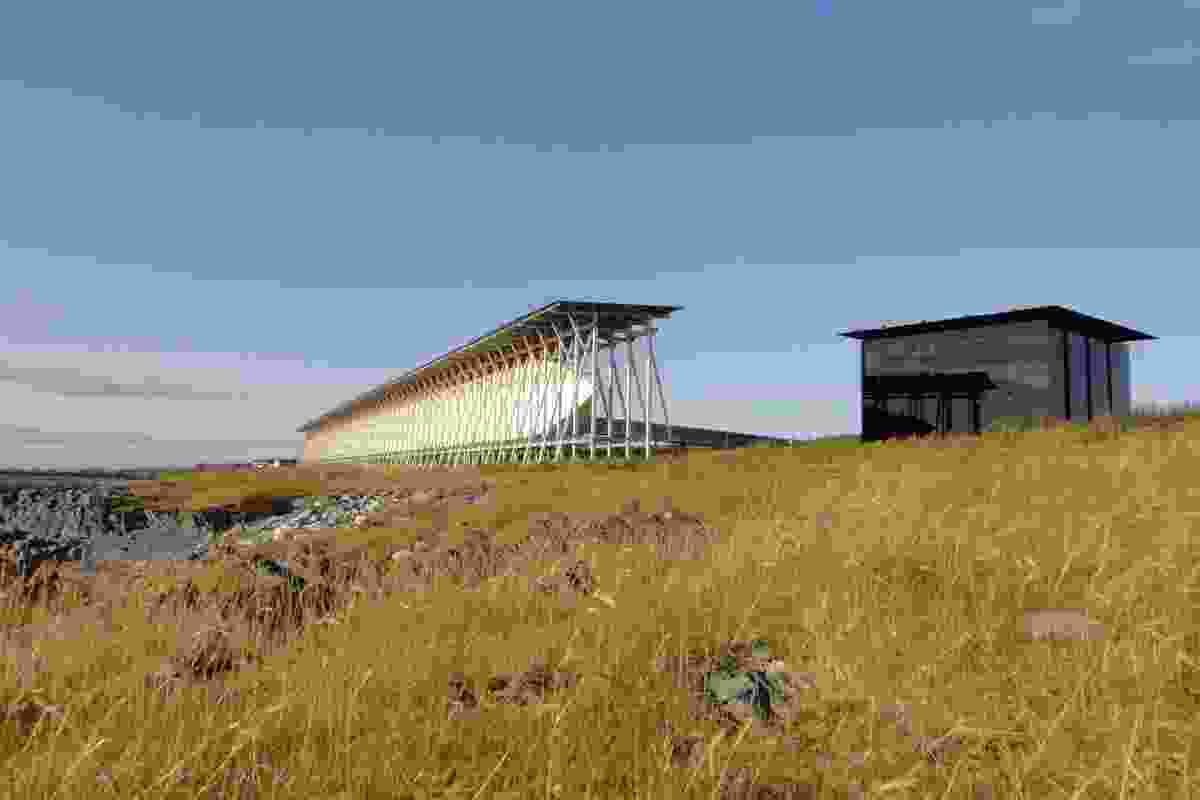 A memorial in two parts: a driftwood skeleton and a black glass box. 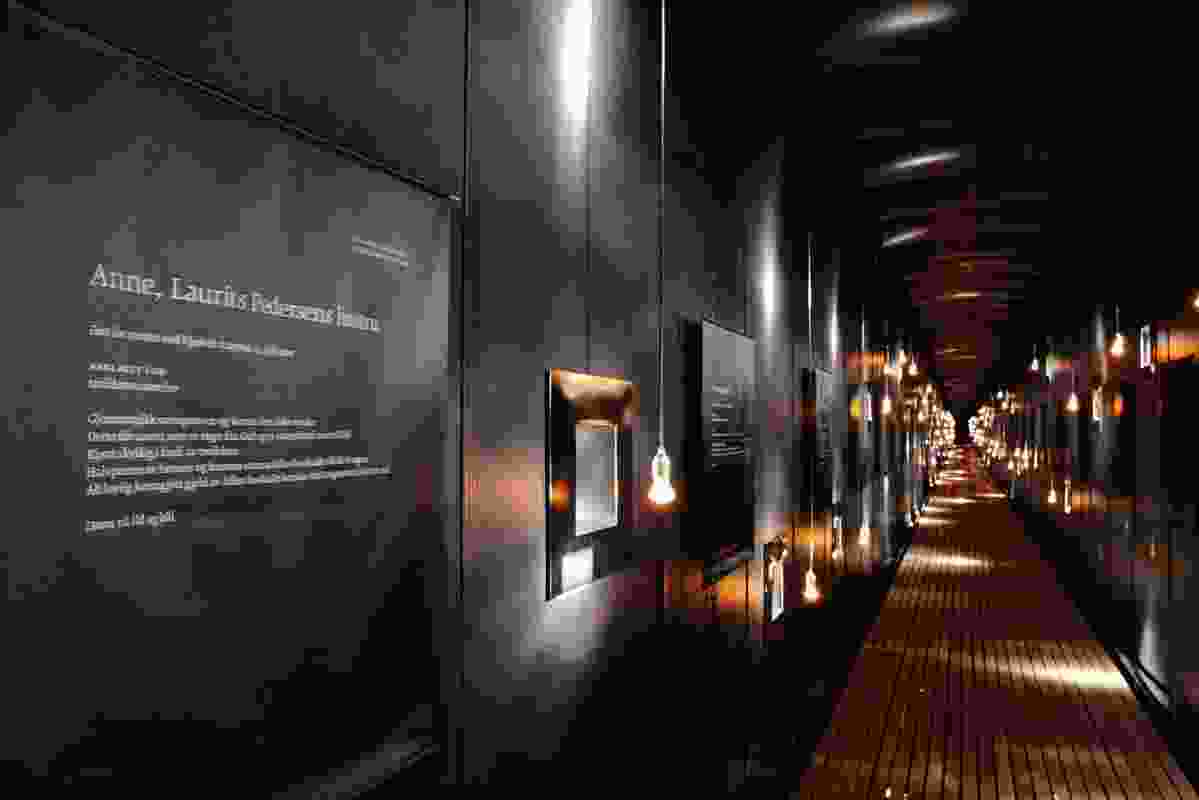 Inside the white “herring” is black-lined with ninety-one windows recessed in metal frames, honouring victims individually. 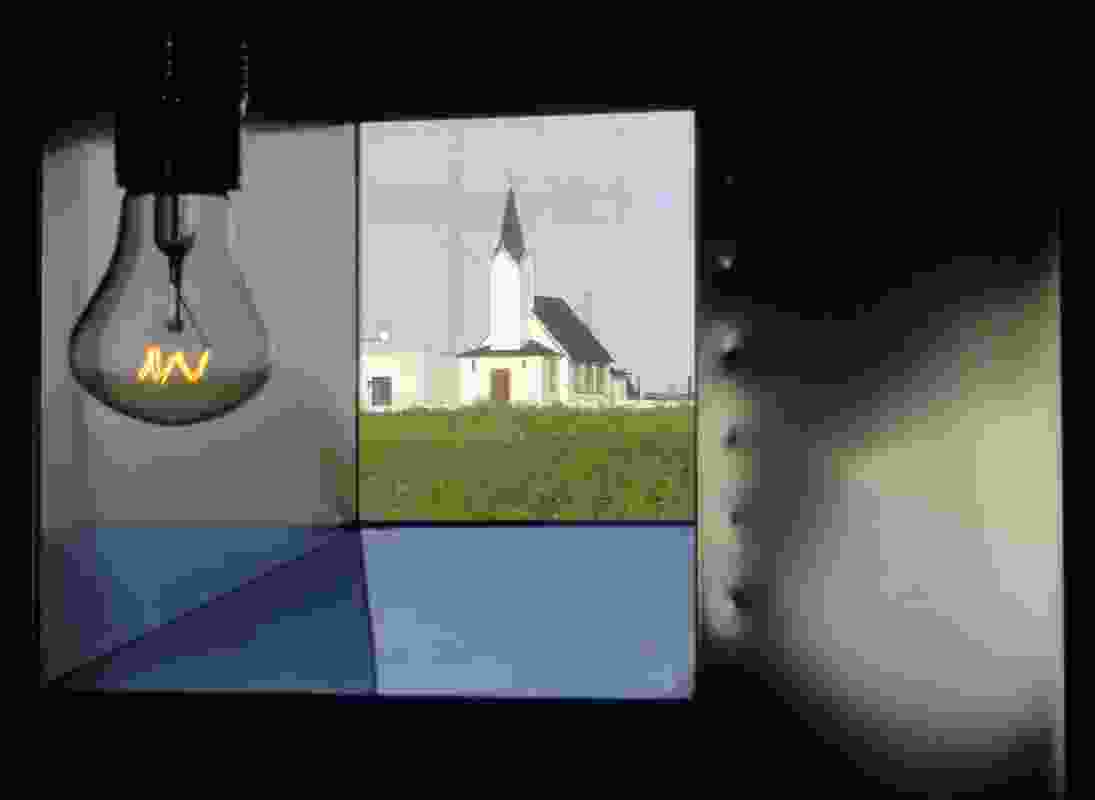 One of ninety-one small windows recessed into metal frames to honour individual victims. 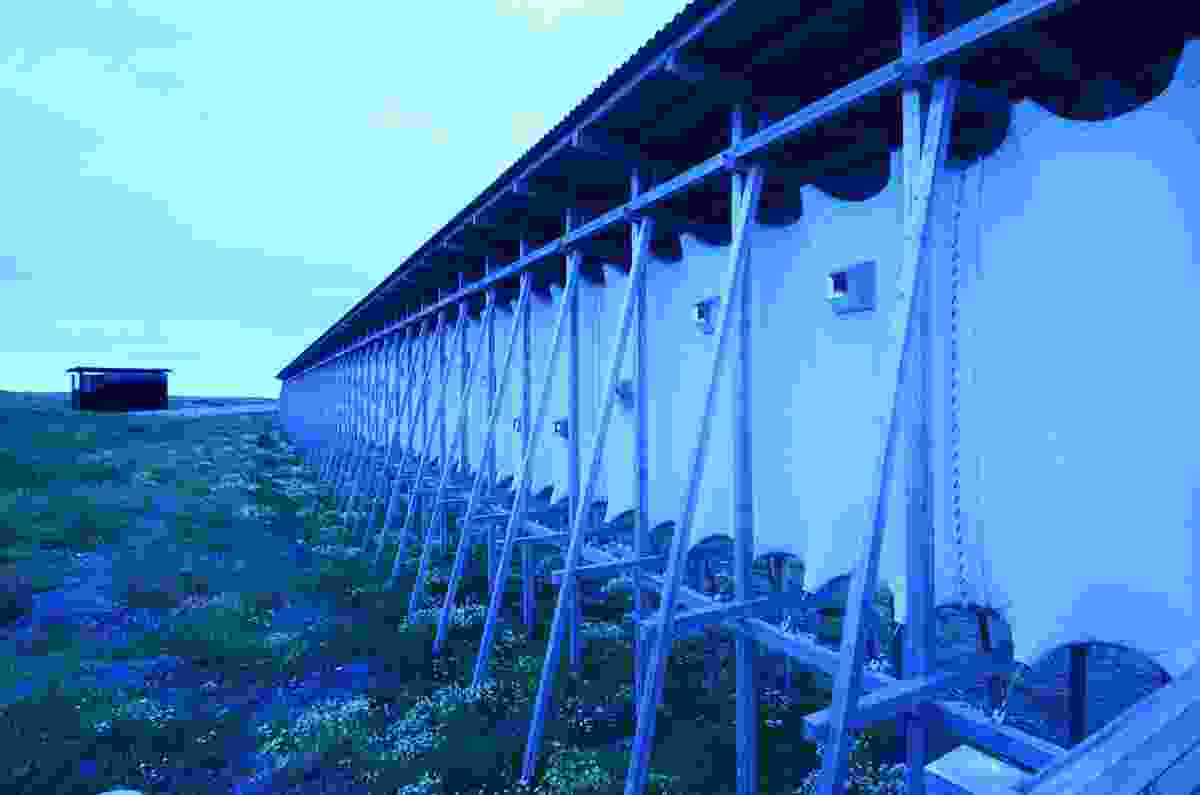 The memorial under the long blue light of midnight. 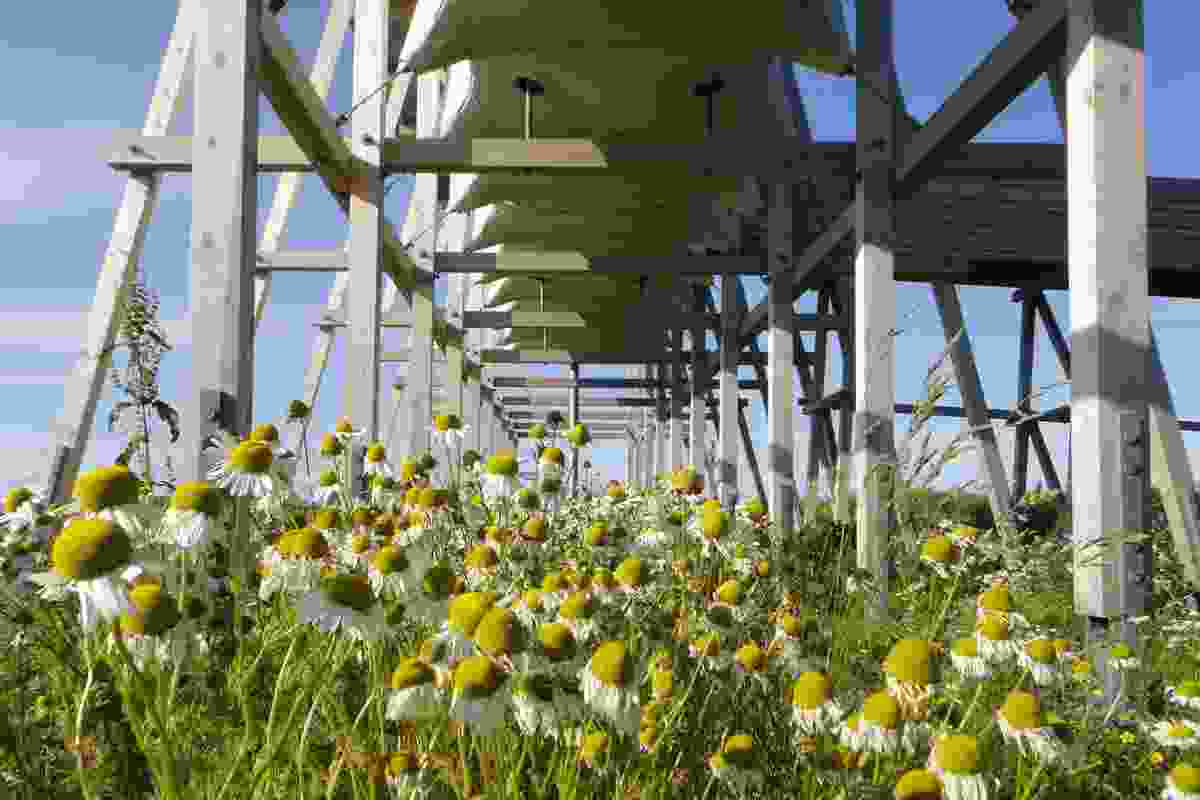 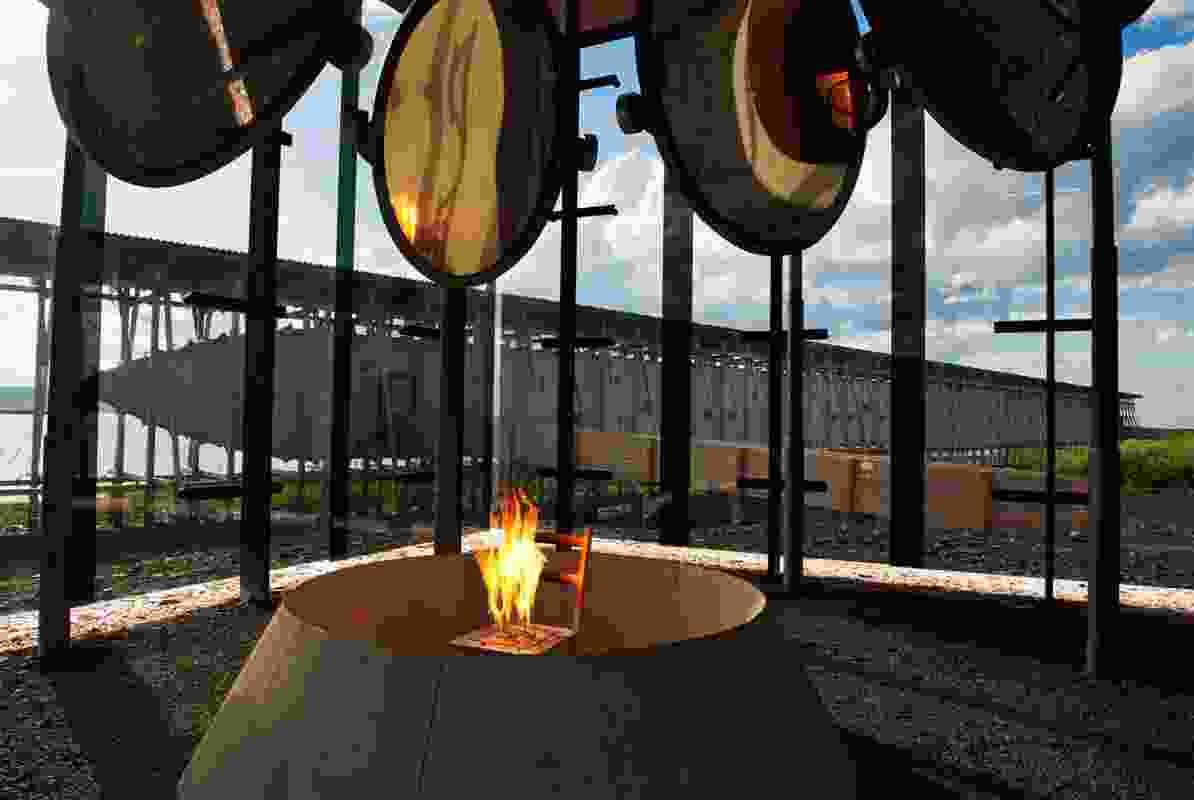 The Damned, the Possessed, and the Beloved memorial by artist Louise Bourgeois. 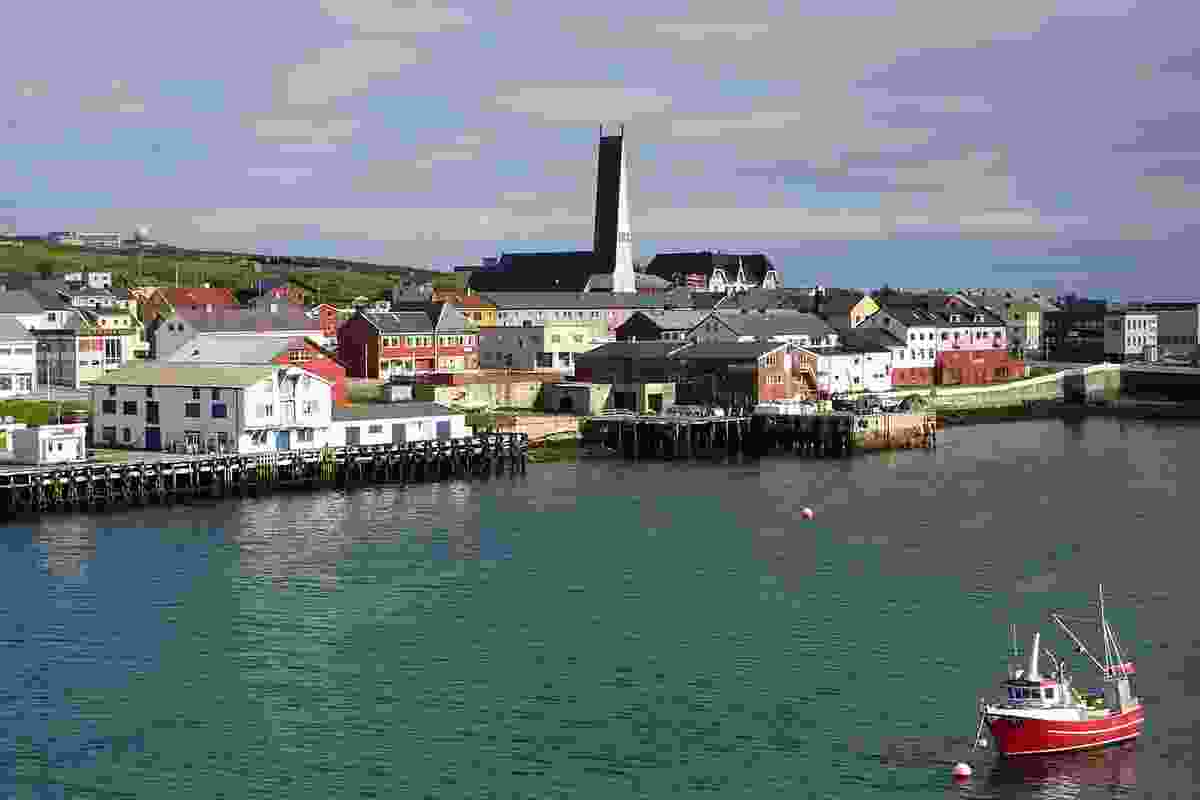 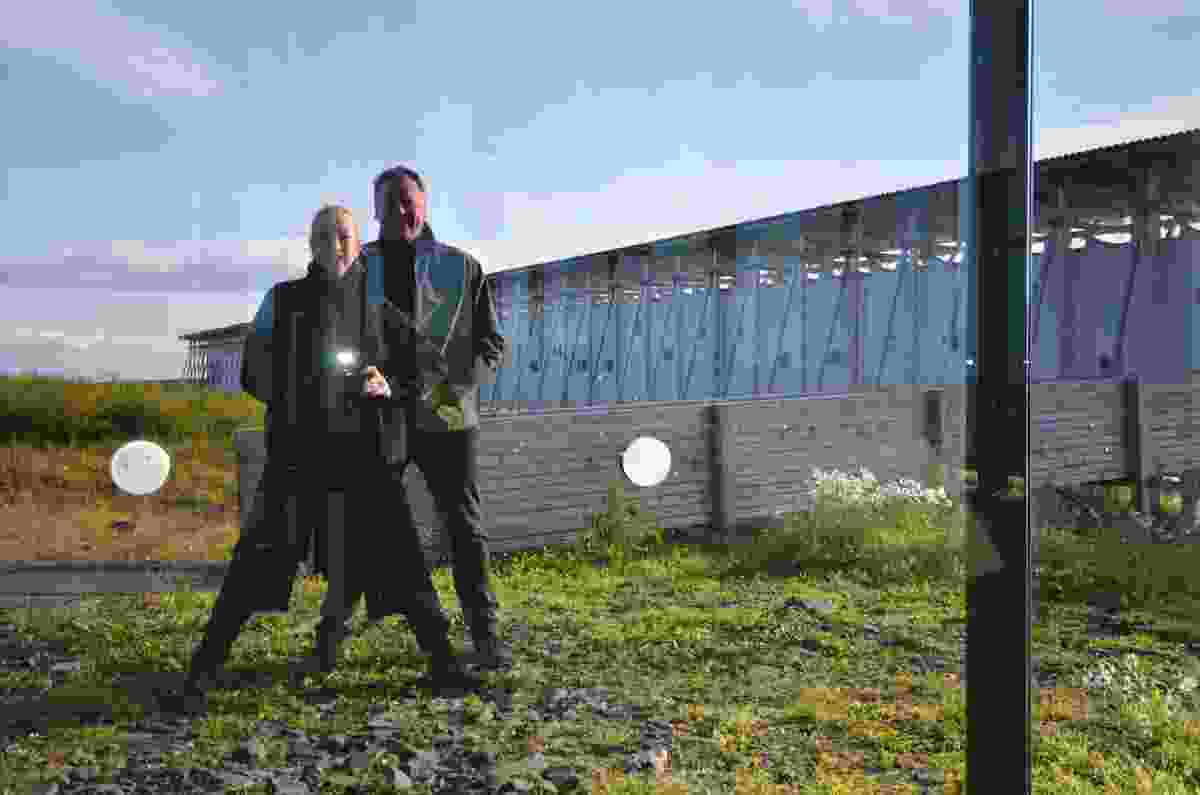 Lindy Atkin and Stephen Guthrie reflected in the witchcraft memorial.