The Edithvale-Seaford Wetlands Discovery Centre is 3 km south-east of Melbourne, adjacent to a fragment of wetland that is now surrounded by sprawling suburbs.

The Edithvale-Seaford Wetlands Discovery Centre meets the functional expectations of Melbourne Water in an efficient, even understated way. The interior fitout, gallery space and gently curved wall of leaning glass that allows visitors to watch the rich birdlife of the wetlands without being observed uses a broadly trapezoid ground plan that independently invites minor explorations of corners, angles and interior-exterior sight lines. By contrast, the exterior form features abrupt, beak-like gable ends and slung suspended roof lines, a pachydermatous concrete panel system (which the architects describe as possessing a “biomimetic quality”) and a coloured underbelly supported on bulbous tapered table-leg columns.

All of this is likely to be something of an engaging surprise to the discovery centre’s imagined community of environmentally sensitive, ecologically conscious citizens and their children, who (perhaps unthinkingly) assume that the impact of observing nature must, as far as possible, be minimized. Minifie van Schaik Architects and the equally innovative client and consultative groups who worked together to secure this result obviously do not subscribe to this view. Inverting the Arcadian trope, they make the “ego” self-aware and visible. If the modest original of the discovery centre is the birdwatcher’s hide, a simple brushwood and sacking structure scarcely distinguishable from the surrounding undergrowth, then this work camouflages nothing, instead spreading its gnarled wings outwards like some unthought-of Jurassic moth. In an odd way, the centre, rearing up as a suspended aerolith, inverts the conventional observational pecking order. Drawing attention to itself, it might be said to divert attention from the cold discipline of counting duck numbers and differentiating Siberian waders (all so troublesomely alike), commanding the observer who would conceal his/her observation to reflect on the environmental impact of what they do.

In the anomalous region the discovery centre occupies – it adjoins a tiny fragment of what was once a magnificent wetland, now progressively surrounded by suburban developments and scored with urban fringe roadside drive-by-style architecture – this post-bush aesthetic represents an entirely appropriate gesture. Here, dense reed beds, chains of open water, and remnant stands of swamp gums and ti-tree mix it with up-to-date inter-suburban road systems whose vehicles seem, in the context of the plovers going about their quotidian business on the rotting mats of beached vegetation, to flash by at the speed of light; permanent flashes are the low cliffs of windows recessed into the dune landscape to the west where the suburban estates encroach. Complexly jumbled up are different hierarchies of vision, different observational motivations, different attitudes to reflexivity and reflectiveness.

If you take a broad view of the cultures of seeing embedded in the technologies of transport and residence so atypically crossed through one another here, you quickly come to perceive the discovery centre as occupying and visualizing the cross-sights of a heritage of competing, even contradictory, takes on nature and place. Here the fostering of community seems inseparable from the construction of viewpoints: transportation and prospect – which were always the hidden prerequisites of the twitcher’s fulfilling weekend – are materialized in the rearing up of a structure just where you would least expect it. The effect is one of momentary arrest, as if this sight-torn polyhedral structure preserves the archaeology of our projections onto the natural world, the prevision of place that migrant birds consecrate and commuters streaming back and forth also dimly worship. To have one’s designs on the environment so trenchantly mirrored back is discomfiting, but exhilarating: inside the discovery centre the clarity of the view – the sudden ease of access to what is normally hidden – might induce a momentary recognition of the inequality inherent in seeing without being observed, but it also gives value to waiting as, after all, what you expected to see glides inevitably out of sight.

I take the discovery centre to be an observatory in a double sense: it allows the cultivation of the traditional disembodied gaze but orchestrates it in a way that draws attention to the phenomenon of observation. As a child I was the proud possessor of many pocket-sized volumes of Frederick Warne’s Observer’s series. How eagerly we aspired to be eyes on stalks, walking telescopes. In the presence of this work these memories come back to me twinned with another key desideratum in the apprentice ornithologist’s vocabulary: identification. Our obsessive differentiation of species involved a refusal of empathy that was the antithesis of emotional identification.

The psychic question the discovery centre raises pertains to the identity of the world it exists in. The reduced Carrum Carrum Swamp and its environs present an opposite environment to any usually absorbed into (and subtended) by freestanding architecture. It thoughtfully avoids the sense of gathering or destination synonymous with the stand-alone (whether defined architecturally or psychologically), offering instead a sense of display, spread, even smudge or blur (as one drives by), which captures the transitional nature of formations here. It suggests that ocular-centric modes of relating and qualifying cannot add up to a dwelling place. “The lens is brimming with the crystal view:/Now shoot your rape of natural land,” the English aesthete and artist, Adrian Stokes, wrote in With All the Views, adding, “Our model structure is an occupation force – OK.” The Centre belongs to a class of architectural lookout that includes the border post and the watch-house: benign as its program of environmental education may appear, its object is the control of passage, the designation of types. The same mindset that evaluates the status of avian migrants divides human “visitors” to Australia into “vagrants,” “accidentals” and “escaped.”

In resisting the temptation to stake a claim on the land, offering instead a constructive alternative to the identification of building with possession, the discovery centre implies the gathering presence of a different community – not the abstract global community of architecture but those immediately involved in the evolution of the scheme. There seems to have been a remarkable openness to all the views, and the elevation of the discovery centre (while it responds to once-in-a-century risks from flooding) also seems to commemorate a concentration of different viewpoints into something like a friendly dance. The architects state improbably that the gash of orange that creates a diagonal crevasse on one face and spreads out across the underbelly of the structure alludes to the breast colour of one of the Australian robins, but birds of this family would be quite out of place in a wetlands habitat. And yet this affront to ecological decorum is partly the point, for who isn’t out of place here in the curiously impassable sphagnum-choked shallows?

Transposed into the models of wellbeing that buildings are said to furnish, the discovery centre is less an observatory than an elaborate attraction: a seductive (eye-catching) decoy deployed to create a community of interests where nothing definite existed before. It tells us that we are the animals we watch, borrowing our gestures from the alarm they show, heavily scattering across the water. It stages the drama of an ego unable yet to settle, to come together, incorporating all the views into the archetypal domus. It speaks passionately and disturbingly about the scarcity of resting places, for while the black swans, the teal and the ruddy shelduck queue up to be counted, it is extremely rare for the fixed observer to find a sight line into the undergrowth that discloses a nest.

Paul Carter is a writer, an artist and the current chair in Creative Place Research at Deakin University, Victoria. 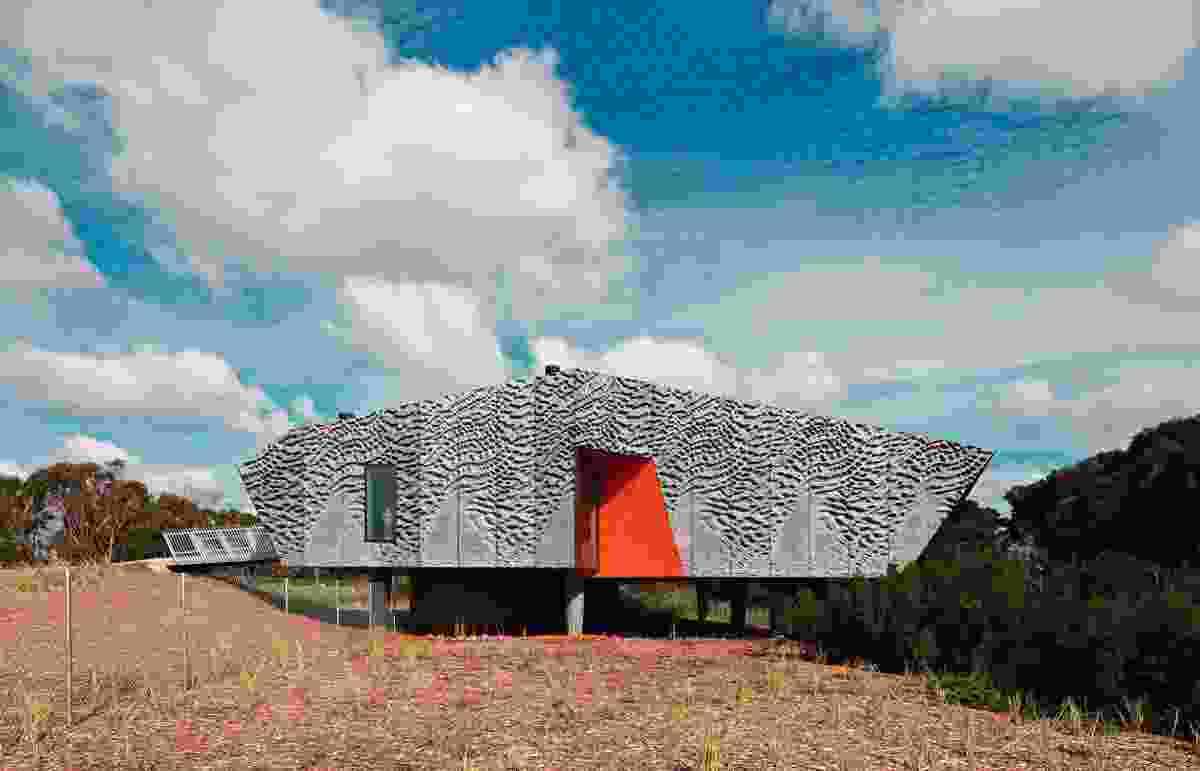 The Edithvale-Seaford Wetlands Discovery Centre is 3 km south-east of Melbourne, adjacent to a fragment of wetland that is now surrounded by sprawling suburbs. 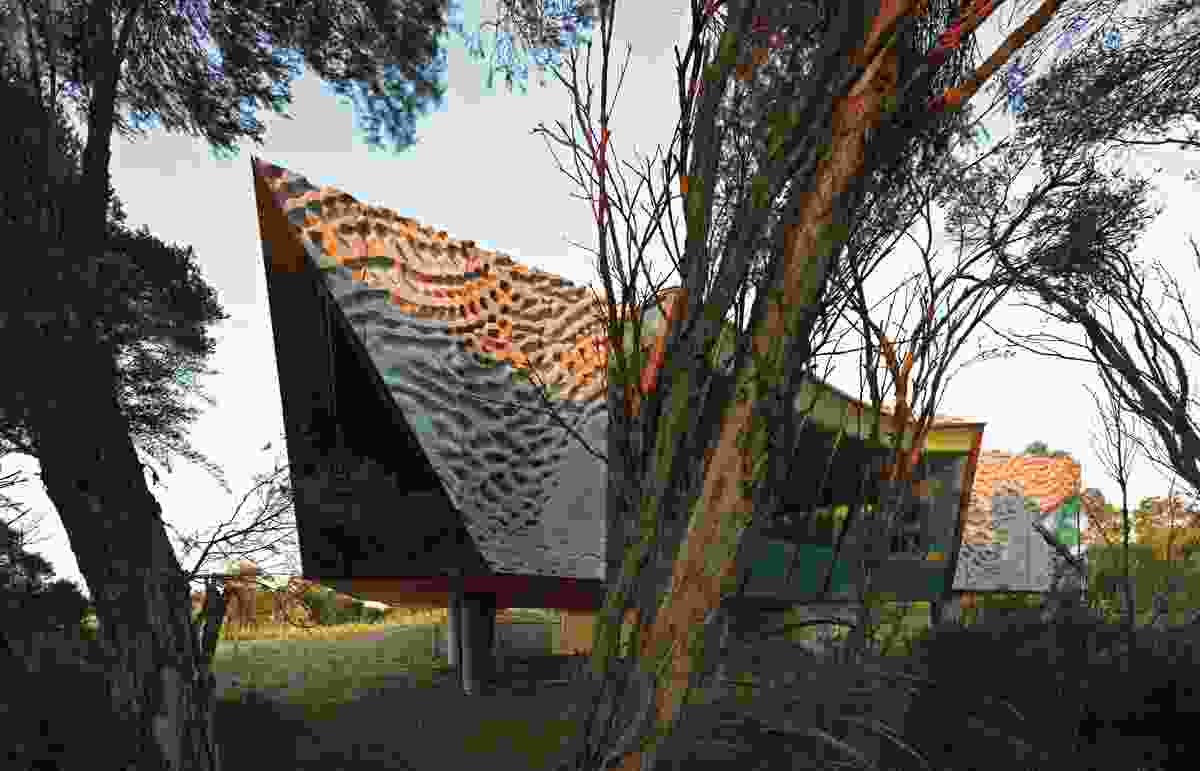 The “lookout” is raised above the wetlands. The orange underbelly suggests the breast of the Australian robin. 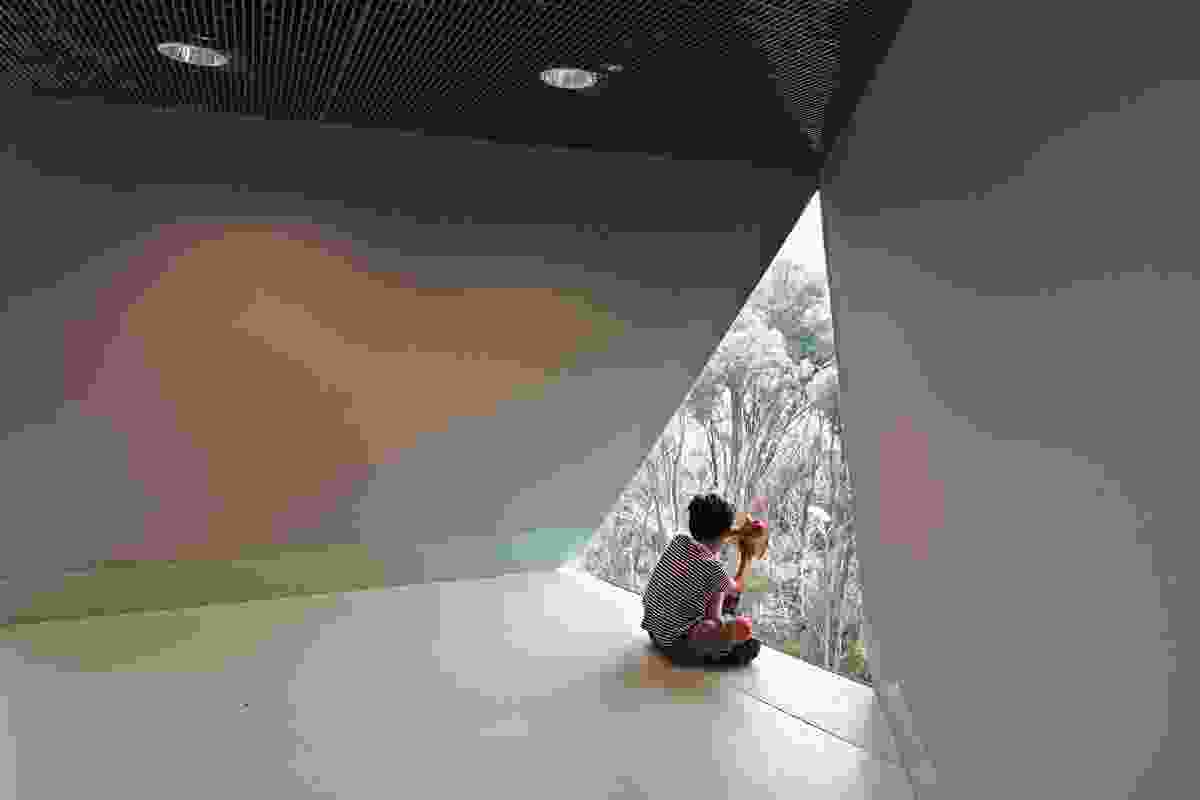 To observe and be observed: the centre allows the cultivation of the traditional disembodied gaze and also draws attention to the phenomenon of observation. 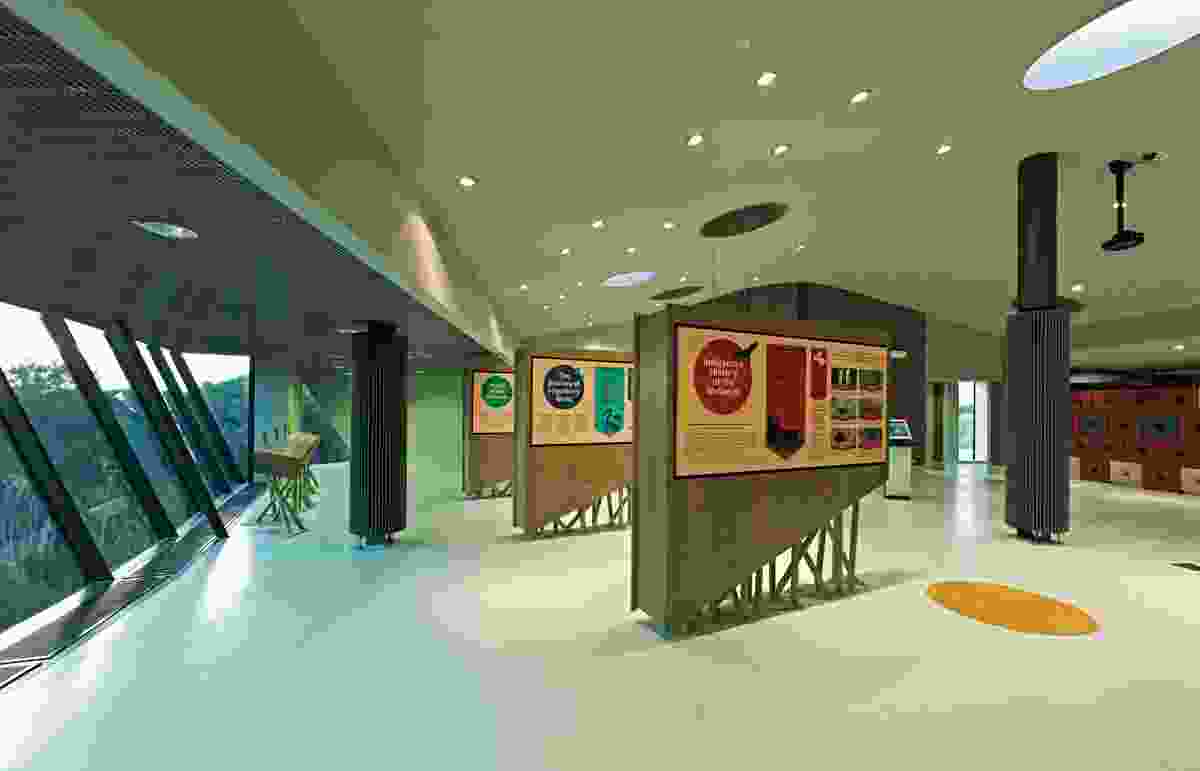 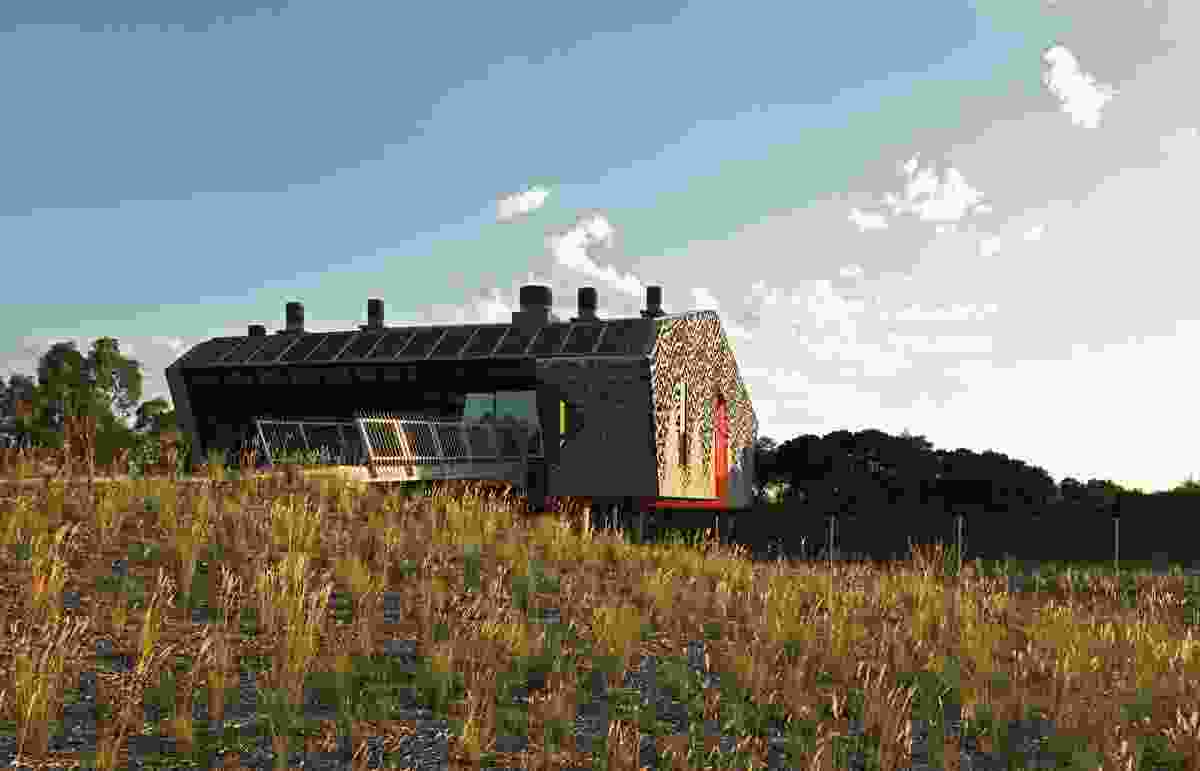 The building offers a sense of display, spread, even smudge or blur (as one drives by) that captures the transitional nature of formations in this landscape. 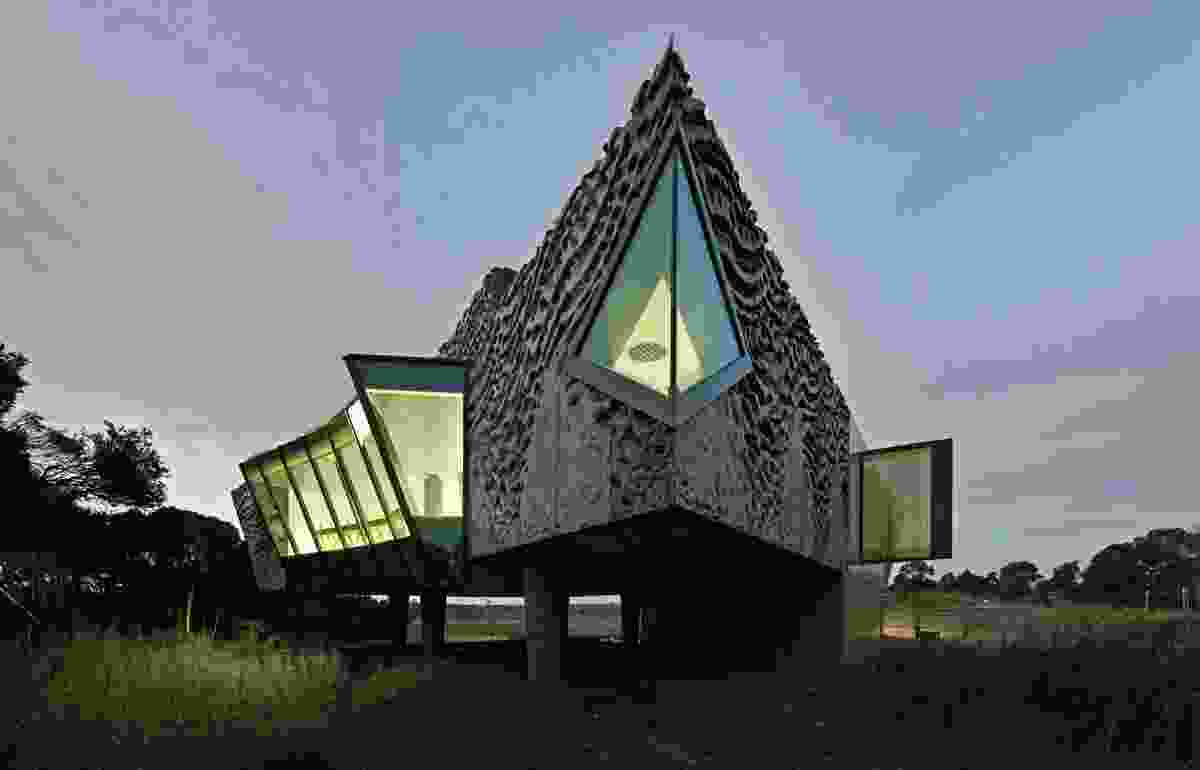 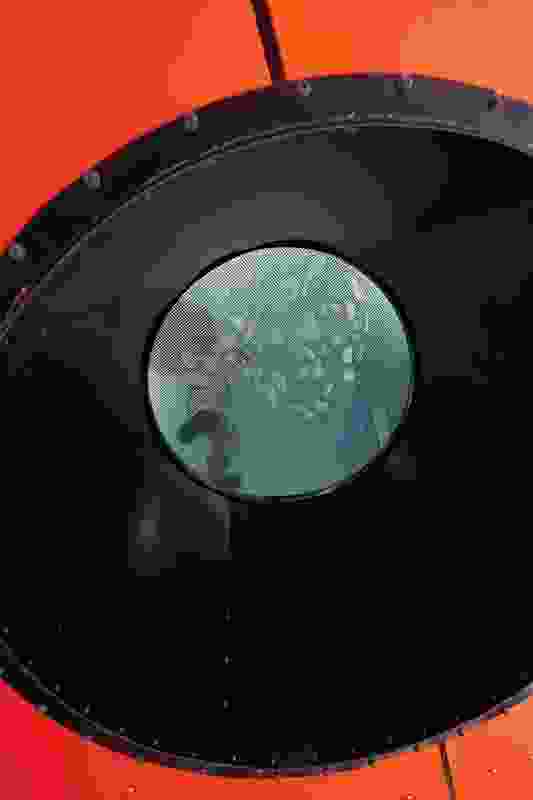 A circular window in the floor connects the observatory to the ground. 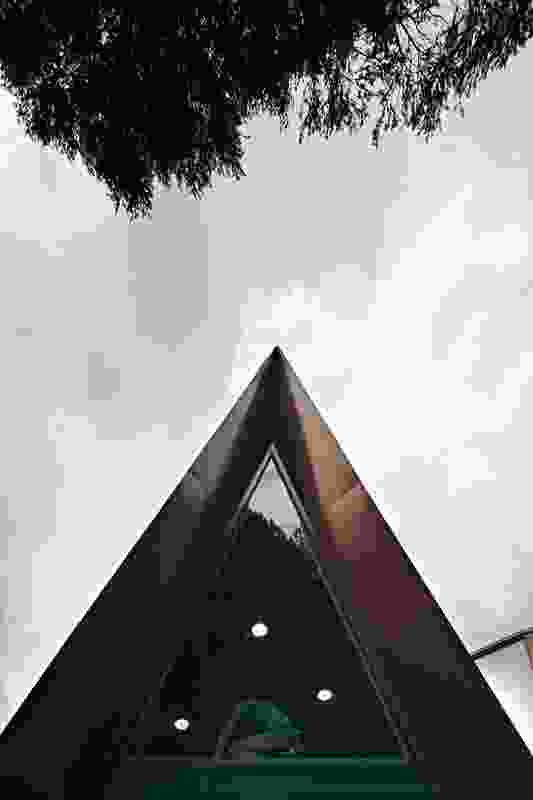 The unhidden observation area might induce a momentary recognition of the inequality inherent in seeing without being observed.