My first impression of Paul Morgan Architects’ trade facility for Box Hill TAFE was astonishment at its sparseness. The function of the building is reduced to the provision of walls and roof to provide shelter, and a floor to accommodate the training of plumbing and carpentry apprentices. As a generic type, it is simple shed. The architectural content is not a consequence of resolving a complex programme but is in the design of the building’s form. It is the detail resolution of the form that reveals the ideas behind the architecture.

Because the trade facility has (obviously) been built with a minimal budget and there is very little building to manipulate, the tectonics are simple and explicit.

The simple portal frame appears to have very little structural redundancy, the external cladding is one of the most common proprietary roof sheetings available and the finishes are simple to the point of expediency.

How, then, has architecture been made out of these impoverished pieces of building?

The most obvious gesture is encountered when approaching the building from the street address. The roof cladding has been faceted down the south wall to make the building look as if it has a tubular form. This illusion is enhanced by the insertion of an elliptical window in the wall. The window is nothing more than polycarbonate roof sheeting, but its largeness provides a clear view of the trade facility’s spartan interior and teaching activities. The tubular form is a popular contemporary architectural concept, but in this case the idea is used as a facade only. The remainder of the building is the simple skillion roof typical of most industrial sheds. I read the street elevation, with its large window, as a sign of the building’s public presence.

The faceting of the facade reduces the impact of the building’s height on the suburban street while also creating a form that appears monumental. A section of the facade is left as an open slot resembling the open deck on the side of a boat. The main entry to the space is an unsealed porthole and the entry ramp looks like a gangplank. The composition has the feeling of an ark providing refuge for a species of tertiary education.

There is no visible security, so the interior is stripped of any material excess that could be vulnerable to vandalism, giving the facility the appearance of being still under construction. Inside, all the component parts of the building are exposed as tutorial aids and reflect the pragmatic nature of what is taught in this simple space. The steel portal frames appear to be the minimum structural size required, the south wall is shaped by exposed roof trusses turned on their sides, the secondary roof and wall framing is neatly left exposed and the floor is a simple concrete slab or dirt floor yet to be plumbed. The elements are rationally ordered and in combination with the (evident) thinness of the cladding they make the building seem delicate in contrast with the robust activities it houses. The impression is of the intricate workings of an electronic device.

When I discussed the building with Paul Morgan, he expressed a desire for it to have been all white to emphasize a machine aesthetic. This reference to the ideas of Modernism, in which buildings would be universally white, has a nostalgic element but also refers to contemporary household whitegoods or gadgets such as the Apple iPod.

The plan of the trade facility is inarticulate compared to the form. There is no requirement to resolve a complex arrangement of spaces, so the building seems to fi t the stereotype of a simple shed.

Looking more closely reveals an idiosyncrasy that belies the simplicity of the shed. The western end of the building is cut open on an angle, making the plan look as if it has been torn. The interior is exposed for all to observe. The ragged end is made safe with an industrial handrail to prevent anyone falling off the edge, and you can imagine the Box Hill apprentices gathering along the handrail at the end of the day to review and discuss their work. This one simple planning device animates the plan of the building as a stage for rehearsal and reflection on the drama of making buildings.

Peter Bickle is a senior associate at Ashton Raggatt McDougall and a sessional teacher at RMIT. 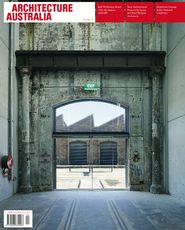