With interiors and architecture by Hola Projects, Skilled Medical in Melbourne has been created using salvaged materials from the previous fitout, creating a workplace in warm tones with real character.

The new workspace was created by taking the old interior apart and reusing as many materials as possible in the new fitout.

A new office space for national medical recruitment company Skilled Medical has been crafted in a 1920s warehouse that was essentially taken apart and reassembled in a different order, according to the project’s interior designer Donald Holt of Hola Projects. “There was a lot of excellent residual material there already,” he says. “There’s no need to ruin something that’s perfectly good.”

Today, the main workspace occupies the first floor of what was once a textile wholesale business, while parking and storage at ground level replace a former print workshop. A beautiful original Oregon-lined timber ceiling, concealed by a suspended acoustic ceiling, was a celebrated find by the client after acquiring the building. A simple brief called for the upgrade and preservation of the base building, provision for growth, a large conference room, utility, IT and several meeting spaces. The responding design is “clean, obvious and open,” says Holt.

A boardroom opening onto decking flanks the western side, while the back of house is to the south, leaving a large workspace environment. All possible materials were salvaged and their reincarnation determined during planning. A feature wall dividing workspaces and behind-the-scenes spaces makes a dramatic application of doors from the previous fitout. Fluted glass sections have been carefully reclaimed and reworked in new timber framing for the meeting room and the boardroom walls, where an outrigger system provides structural support.

Workstations were created to suit the weight of the building and the general ambience of the space. High partition walls constructed from CNC-cut timber resolve power and data management and at the same time, retain the desired earthy, non high-tech aesthetic. An integrated hanging device for a large map of Australia within each station is a considered response to the workplace’s need to regularly reference recruitment locations. Mid-level task lighting caps the partitions and bestows a change in scale against the high ceiling, to lend “a cocooned feeling in what could have been an alienating, big space,” says Holt. Movable EchoPanel clad fin walls address the need for privacy and a focused space within a long bench system for each recruiter. They also allow for varying staff numbers.

While Hola Projects doesn’t subscribe to having a design style, Holt confesses to a proclivity for sculptural lighting and “thirsty materials” – those in a raw, unfinished or distressed state. “Good fixtures can take the level of everything up,” he enthuses. Other examples include the selection of a contemporary Nur Artemide pendant for the owner’s private meeting room, which also houses his favourite collectables and furniture. Prisma K-lites from Inlite illuminate the lobby and hallways, while making a big gesture in the kitchen is a Flos 265 wall light. Infusing a medical overtone with a touch of comic in the boardroom is a bespoke chandelier dubbed Dondelier, comprised of large lamps attached by silicon rubber straps.

Adding further soul to the Collingwood-based office is the local artisan custom-making of furniture and lighting, reusing timber from the original interior. According to Holt, the solution is part of the client’s idiosyncracy. “This is something that’s very rich, it’s about people and humanity,” of fondly collected elements and the repurposing of materials within a charming historic building that now breathes new life. The Skilled Medical office is a warm, cozy environment, where everyone and everything has become part of one family.

The creation of the new offices for Skilled Medical was the first time the organization had commissioned a custom-built space. The culture up to this point was one of collecting things together and making do. It was a family environment and everyone was invested in this cosy, yet professional, informality.

It was critical that the positive and inclusive nature of this “big family” be maintained and encouraged in the new space. The new environment was to embrace growth, provide a better-serviced environment for the employees and build on the brand.

The planning was simple. Conference and utility spaces flank the south and west, and the remaining large, open environment houses workspaces. The balance between a historical permanence of the volume and the normally ephemeral nature of modern workstations was a challenge. We chose to construct a CNC-cut timber spine that was high and architectural, rich and textured – and which bridged furniture scaled workspace and the six-plus-metre-high volume. These walls were capped with custom lighting and become the mid ground of the space.

The desk is a long bench system enabling expansion and contraction of the capacity along its length. Privacy is provided by EcoPanel-clad fin walls that could be moved to accommodate varying space requirements and to set the space standards.

High value was placed on material texture and provenance. Walls were made from doors salvaged from the previously demolished fitout. The fluted glass was salvaged and repurposed. The Oregon timbers found in the ceiling cavity were handed to joiners to make furniture and lighting. As much as possible came from the original building and the residue of its previous incarnations. The desire for local specificity was extended to the use of makers and craftspeople in the area. One of the joiners was a block away. Local artisans made feature lighting. 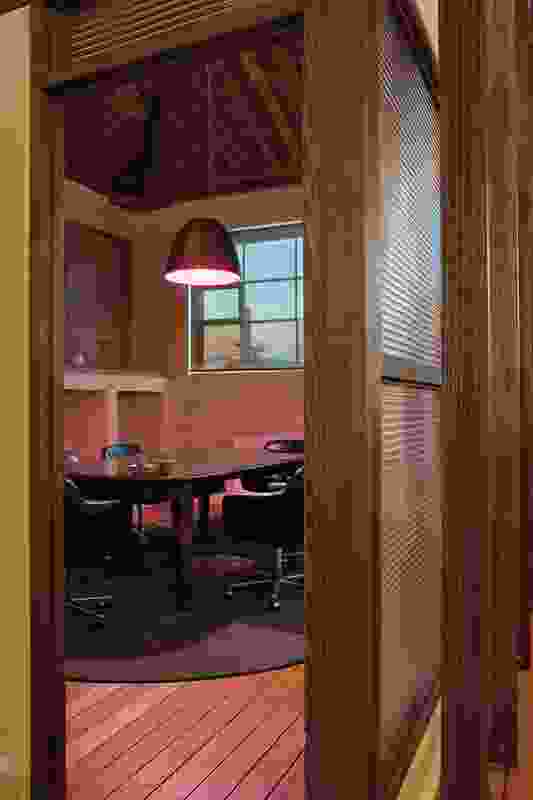 The new workspace was created by taking the old interior apart and reusing as many materials as possible in the new fitout. 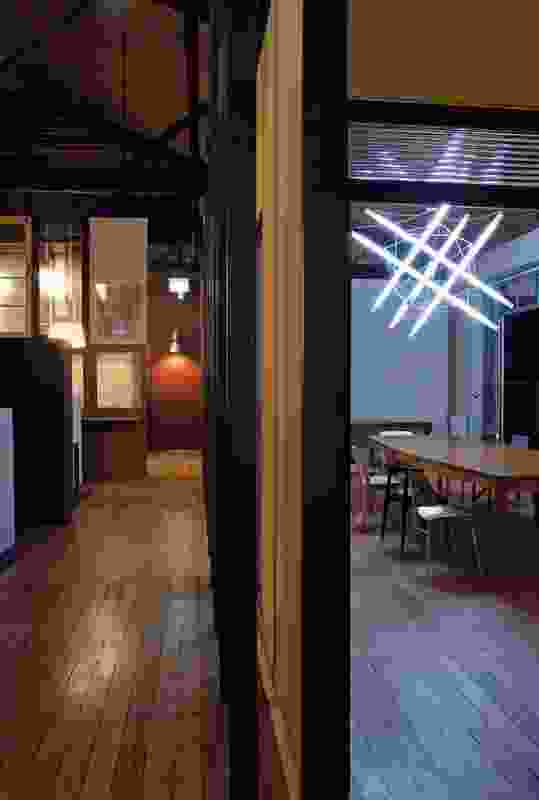 In the boardroom a custom-designed chandelier was made from lamps and silicon rubber straps.

Much of the furniture and lighting was found, salvaged and borrowed, or made from timber salvaged from the site. 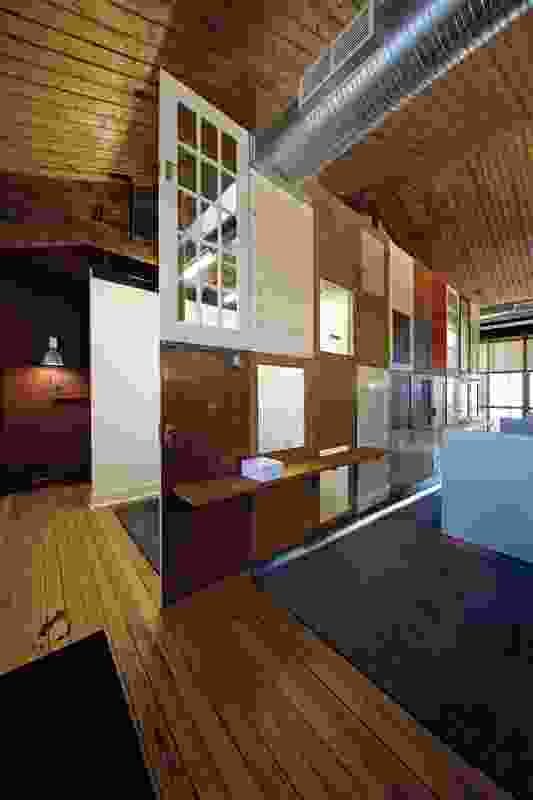 Much of the furniture and lighting was found, salvaged and borrowed, or made from timber salvaged from the site. 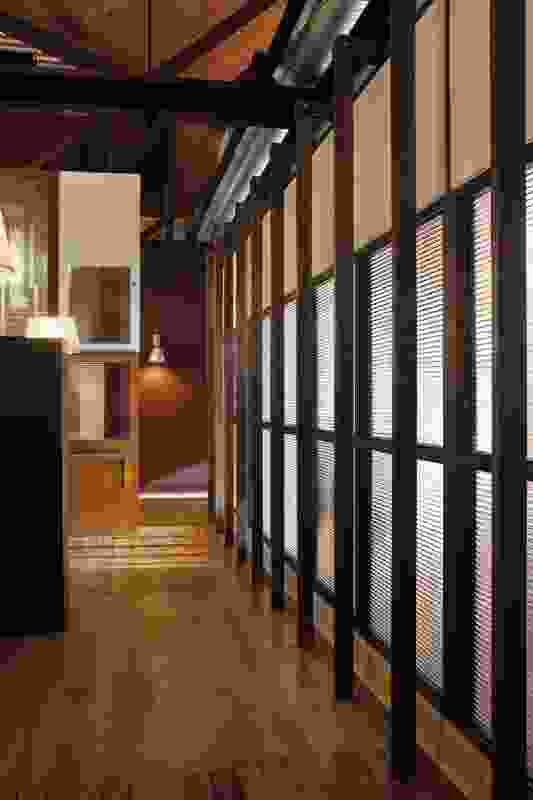 Doors from the previous fitout were used in a unique feature wall to divide workspaces. 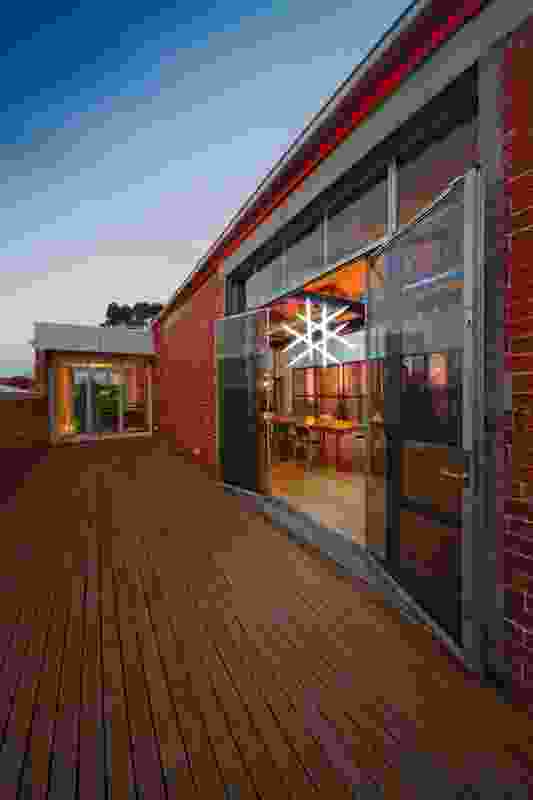 Panels in the boardroom wall are made from salvaged fluted glass.