Woven music: The making of Utzon’s Homage to CPE Bach

To commemorate the launch of the ATW Tapestry Design Prize for Architects, Richard Johnson reflects on his encounters with Jørn Utzon, as one of the twentieth century’s most renowned architects developed his tapestry for one of its most iconic buildings.

Jørn Utzon’s Homage to CPE Bach in the Utzon room at the Sydney Opera House.

Traditionally, many great architects have had a great understanding and appreciation of the art of tapestry and it’s potential as an integral part of architecture. Jørn Utzon certainly did.

Utzon designed what is now called the Utzon Room at the Sydney Opera House for chamber music, lectures and functions. The room sits within the concrete vaults of the Opera House’s podium, oriented to the harbour setting, a harmony of natural materials and details dominated by a singular work of art: a tapestry, to adjust the acoustics of the space and to add colour, texture, human scale and symbolic meaning.

I recall as Utzon excitedly first explained his idea in Mallorca. He began by talking, not about his design, but how people would experience it, and of the music and art that had inspired his thinking. He wanted a seating arrangement for chamber music with Sydney Harbour as a backdrop, and he needed the wall opposite to be sound absorbing. He understood that in this long room, with a window on the east side and his 14-metre-long tapestry on the west, people would first encounter the work on entry from the south, by promenading down the space.

Utzon was amused to be the artist of the building, creating a work of art about the art performed in the building, as he said, “to express music in a picture”. He drew upon the Hamburg Symphonies by CPE Bach as inspiration for his work. This music, particularly the Symphony No. 3 for Strings in C Major composed in 1773, has a vital and processional nature. As he explained, the composer was most appropriate as CPE Bach was considered by Mozart to be the founder of the symphony.

Utzon also referred to works of art like Raphael’s The Procession to Calvary to gain further useful insights; as he said, “to see what was in it”. He was aware that the work would often be seen through a field of people. Observe how his bold, dark strokes have a human torso scale to them, as well as a processional rhythm. He understood the medium of tapestry; it’s texture, how it would be woven, the direction, the warp and weft, its acoustic qualities and how best to light it.I remember a critical meeting in Hellebæk in 2003, in the beautiful home Utzon designed for his daughter Lin. The meeting was with Jørn, Lin and Grazyna Bleja of the Australian Tapestry Workshop; woven samples, colours, the weave, wool, cotton and metallic threads, the best technique to capture the torn-edge detail of the work, were all discussed. It was a long day, all were tired, but Utzon was energised and overjoyed. Everything had been approved and finalised, with the exception of the gold thread – the explosion of violins, as he liked to refer to the gold shape at the left side of the work. The Workshop had already produced many gold samples, but Utzon was not happy with any of them. He wanted something much brighter than the samples and eventually a colour was found that he was happy with. Most of us considered that gold to be too bright and gaudy for the work. But as you can see now, it works perfectly, and is further proof of his visionary eye.

Lin took Grazyna back to her hotel in town. Utzon was keen to continue the discussion and to show me something. We drove the short distance back to his home where he escorted me through that marvelous living platform of brick, timber and glass, overlooking the forest, to a dining room completely dominated by a large tapestry: a work by Le Corbusier, woven in the 1960s in the great Aubusson workshops. Utzon came very close to the weave and, examining it intently, exclaimed, “There! See that? Ours will be better!”

More information on the ATW Tapestry Design Prize for Architects can be found at www.tapestrydesignprize.org .

This essay was adapted from a speech given by Richard Johnson at the launch of the Prize in the Utzon Room at the Sydney Opera House, 7 October 2014.

Woven music: The making of Utzon’s Homage to CPE Bach 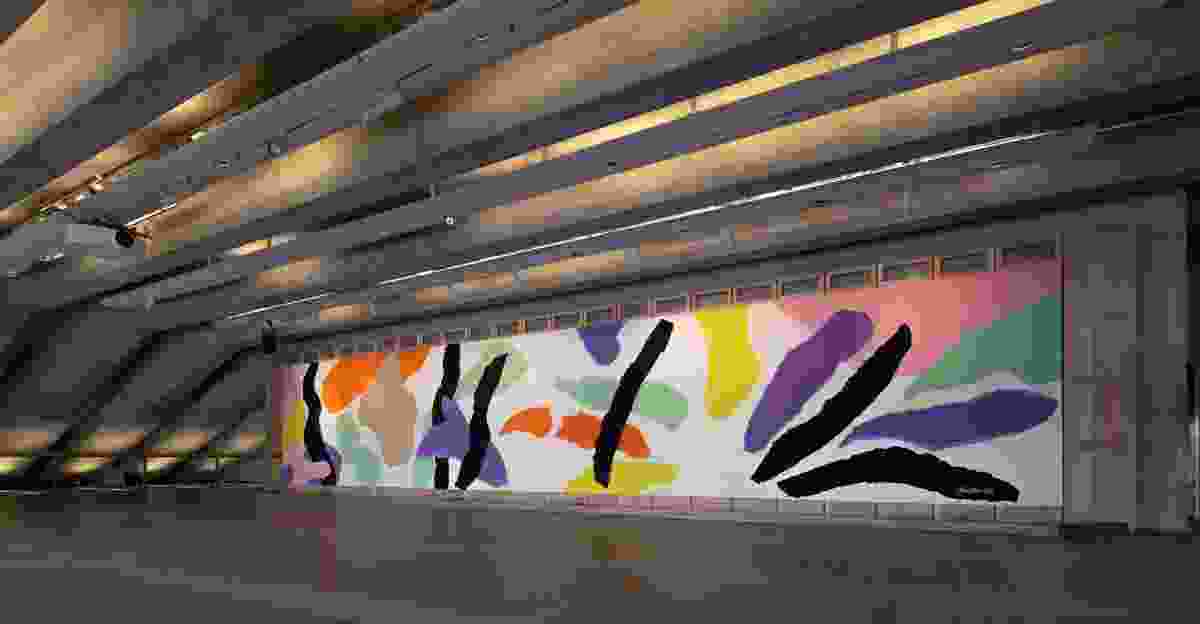 Jørn Utzon’s Homage to CPE Bach in the Utzon room at the Sydney Opera House.