The collaborative design for Yagan Square in the heart of Perth returns the site to its origins as a people’s meeting place and links previously disconnected parts of the city.

The square’s design integrates architecture, landscape and art, including a nine-metre statue, Wirin, designed by Tjyllyungoo (aka Lance Chadd) and sculpted working with Stuart Green from Big Spoon Art Services.

How a city develops and engages with its key civic spaces says a lot about its own aspirations for the future. Perth has recently gone through a process of repositioning itself through several key infrastructure projects that will ready it to shift from a small city to one with an expected population of up to four million people by 2050.

These projects include Elizabeth Quay (ARM Architecture and TCL – reviewed on page 20), the RAC Arena (ARM Architecture and CCN), Optus Stadium (Hassell, Cox and HKS), Fiona Stanley Hospital (Hassell, Hames Sharley and Silver Thomas Hanley), the New Museum (Hassell and OMA) and Yagan Square (Lyons in collaboration with Iredale Pedersen Hook Architects and Aspect Studios). As the smallest of the projects listed, Yagan Square would be easy to overlook. Yet it sits in the heart of the city, over and adjacent to Perth Railway Station, and at the intersection of architecture, infrastructure and public space.

Yagan Square’s intrigue lies in its engagement with the site’s future and its past. It is named for Yagan, an Indigenous warrior from the Nyoongar Nation who was murdered in 1833. He was key in the resistance movement against white settlement along the Swan River colony and his killing has come to symbolize the brutal way in which Indigenous people were treated by the early settlers. At the heart of the design, which emerged from a competition overseen by the Metropolitan Redevelopment Authority, lies a rich and layered narrative that comes from the close working relationship between the architects, landscape architects and public artists.

Where the Elizabeth Quay development (also led by the Metropolitan Redevelopment Authority) has more of an “if you build it, they will come” feel and, in reality, requires extensive programming for activation, Yagan Square sits at the city centre, navigating the space between the CBD and the night life of Northbridge. While the project benefits from some programming, the design has focused on the creation of spaces that are naturally attractive to people. Nowhere is this seen more strongly than in the integration of landscape, architecture and public art as it moves across the upper-level meeting space down toward the City Link.

Yagan Square gives us previously unrealized access to views of the city’s elevation. It navigates the combined challenge of changes in level and disability access through a cleverly crafted landscape that is both engaging and robust. Importantly, it challenges our postcolonial relationship to the land by placing the building under the landscape and privileging an Indigenous narrative.

Because the square invites passage from so many directions into and through it, it is both dynamic and vibrant. Its level changes create connections within the site and views into and across the Market Hall, as well as connecting to the broader urban realm through long views out to the city and beyond.

In recent months, there has been much public debate about the sacrosanct nature of public spaces during negotiations for the now-defunct plan to establish an Apple store at Federation Square in Melbourne. For Yagan Square, the project brief demanded a commercial component: the Market Hall is a largely internal space that sits under the topography as it descends from the Horseshoe Bridge to the lower-level City Link. Along the perimeter, small cafes and food vendors selling unique local produce offer a dual aspect to service patrons who access the train station through the square.

Yagan Square has not been designed as a single, totalizing gesture. Rather it invites curiosity and exploration, revealing stories over time. In this project, we see the value of the combined project team listening closely and working collaboratively with members of the Nyoongar Whadjuk Working Party to understand their stories and develop ways to embed them deeply within contemporary architecture.

Aboriginal Elder Richard Walley worked as a liaison between the Nyoongar Whadjuk working group and the design team on behalf of the Metropolitan Redevelopment Authority to ensure that the stories were told and understood. In his capacity to move from words to drawings, he was able to capture and diagram stories from both sides, creating a feedback loop that everyone could understand.

Rather than creating an iconic singular object, the project team has developed a space of deep and layered memory, with each element having symbolic significance in the narrative. It is a place that can be returned to, time and again.

At the heart of the project sits the Meeting Place that, over time, will come to hold the memory of informal and formal events. It speaks to the individual, to small groups and to larger gatherings. There is a genuine invitation for the Nyoongar community to occupy this constructed landscape – and it has been warmly embraced.

With the exception of a single stone (the Pilbara red), all of the landscape materials were sourced from Nyoongar land. This made the material palette integral to the success of the project, embedding meaning and creating something that is genuinely of this place. Even challenges such as the demand for digital screens became design triumphs through the combined efforts of design and research. The resultant forty-five-metre-high digital tower is an important beacon in the city, reflects the fourteen Nyoongar nations and combines culturally rich programming with commercial content.

Yagan Square is a public space that will continue to evolve. The forest of trees will grow over the coming decades to become an important native canopy within our city centre. It will become a breathing space and living room that breaks down the barrier between the CBD and Northbridge and allows both flexibility and intimacy as the population grows.

As a patron, it has made me feel more hopeful about the capacity to create public spaces that are genuinely inclusive. As an architect, it has made me hopeful about the rich outcomes that can come from bringing the stories of our First Nations people into a contemporary context. It is a new type of space that comes from looking at our past – it is complete yet evolving, inviting our future history to imprint on its surface and tell the story of this important shift in Australian history. It integrates the wisdom of the custodians of our land into the fabric of our growing cities.

— Emma Williamson is a co-founder of The Fulcrum Agency, an architectural consultancy that leverages community and social outcomes through evidence-based design thinking.

Yagan Square is built on the land of the Whadjuk people of the Nyoongar nation. 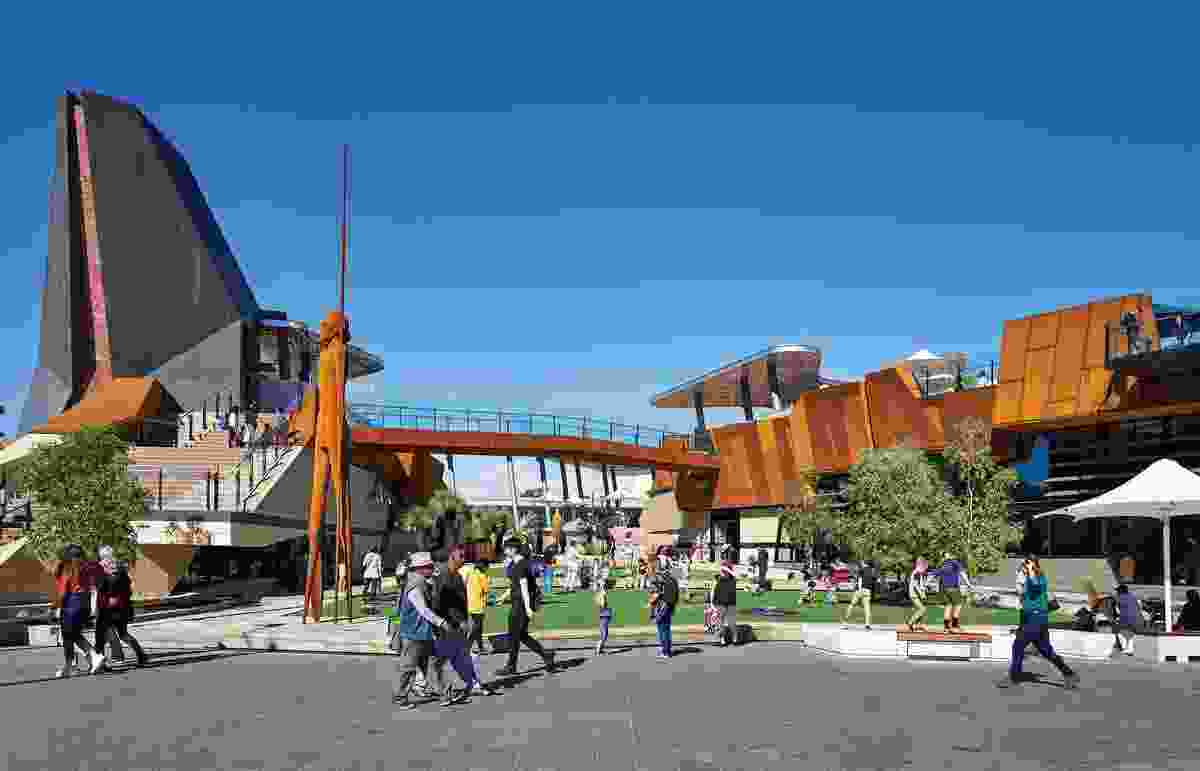 The square’s design integrates architecture, landscape and art, including a nine-metre statue, Wirin, designed by Tjyllyungoo (aka Lance Chadd) and sculpted working with Stuart Green from Big Spoon Art Services. 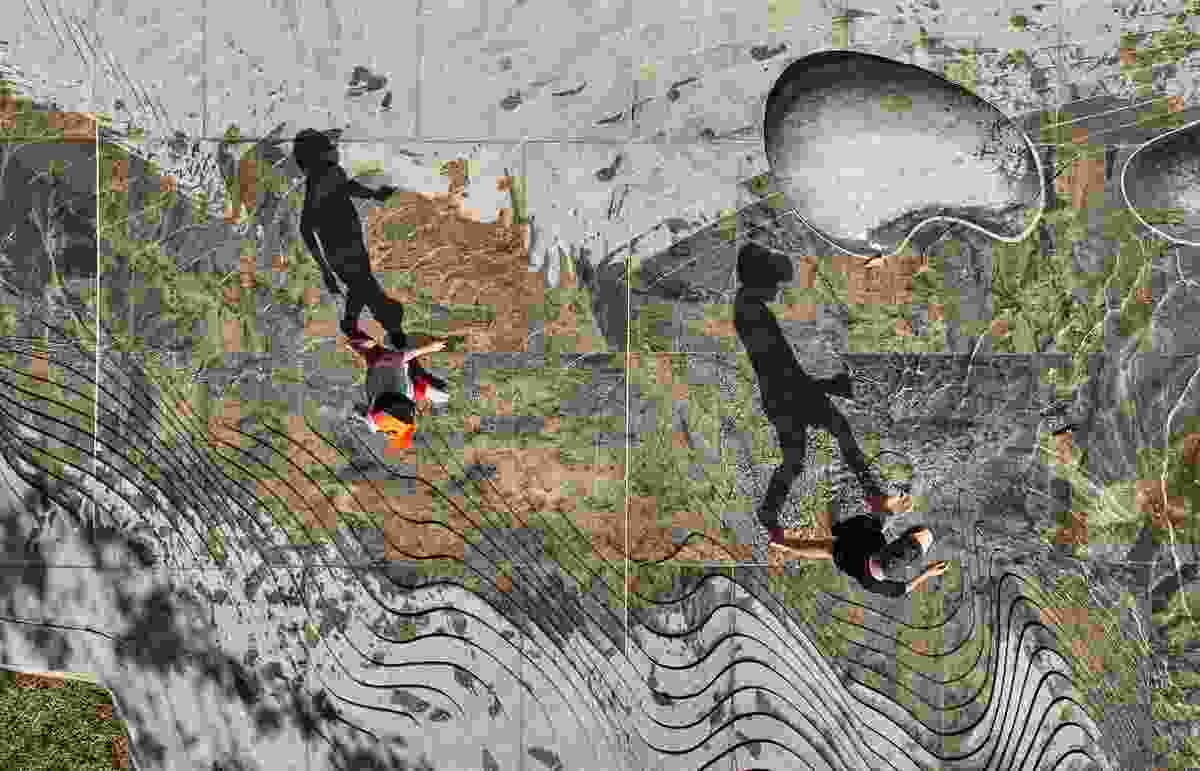 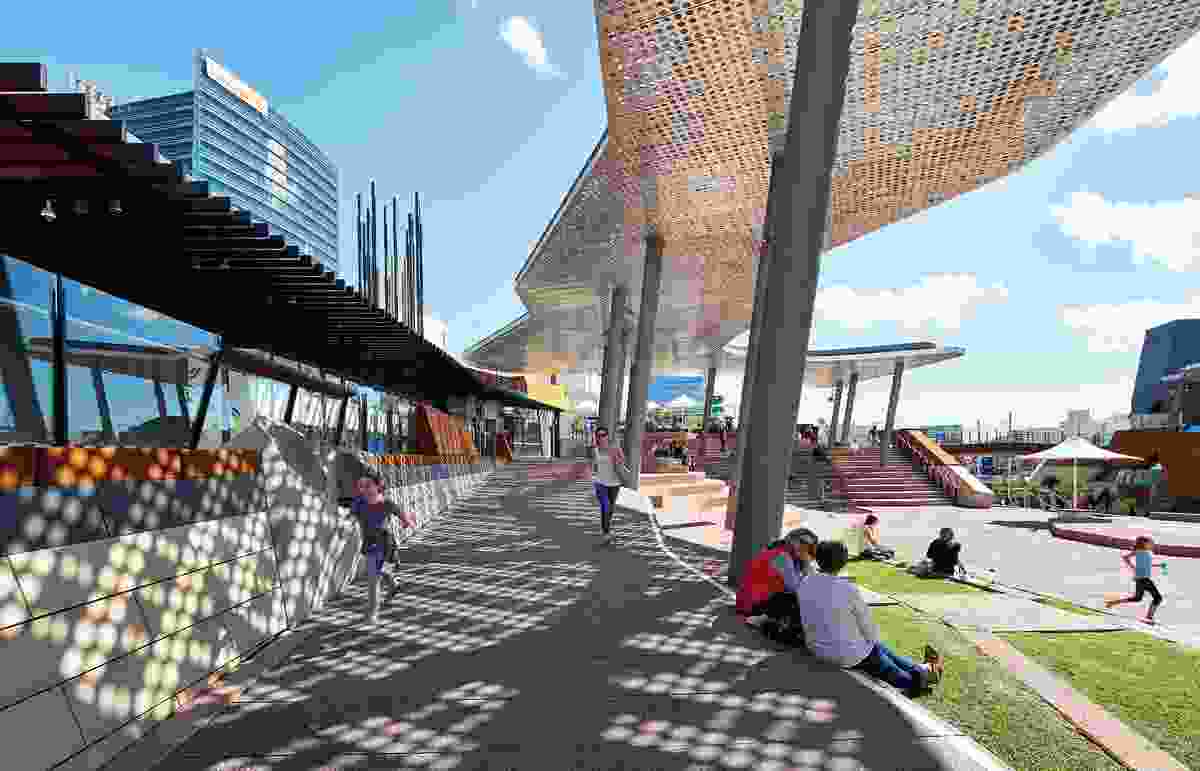 A floating metal canopy shades the amphitheatre during the day; after dark, it becomes a screen for digital projections. 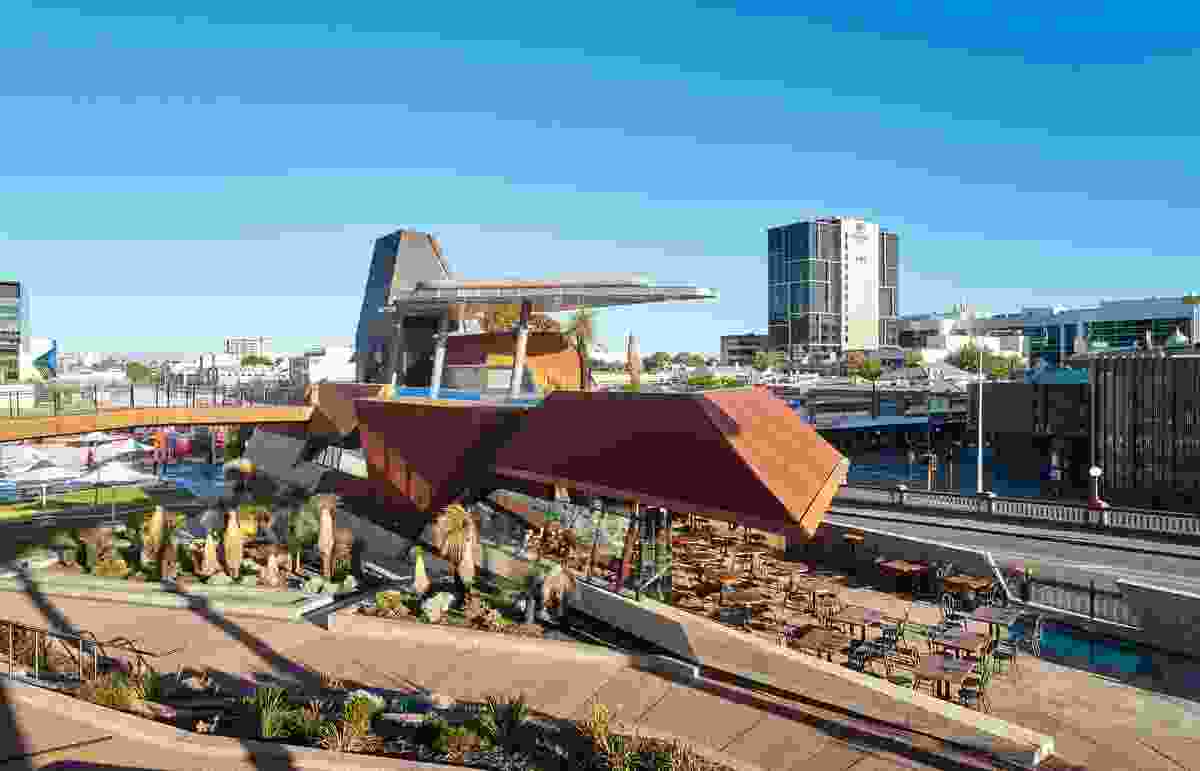 The collaborative design of Yagan Square places the building beneath the landscape and privileges an Indigenous narrative. 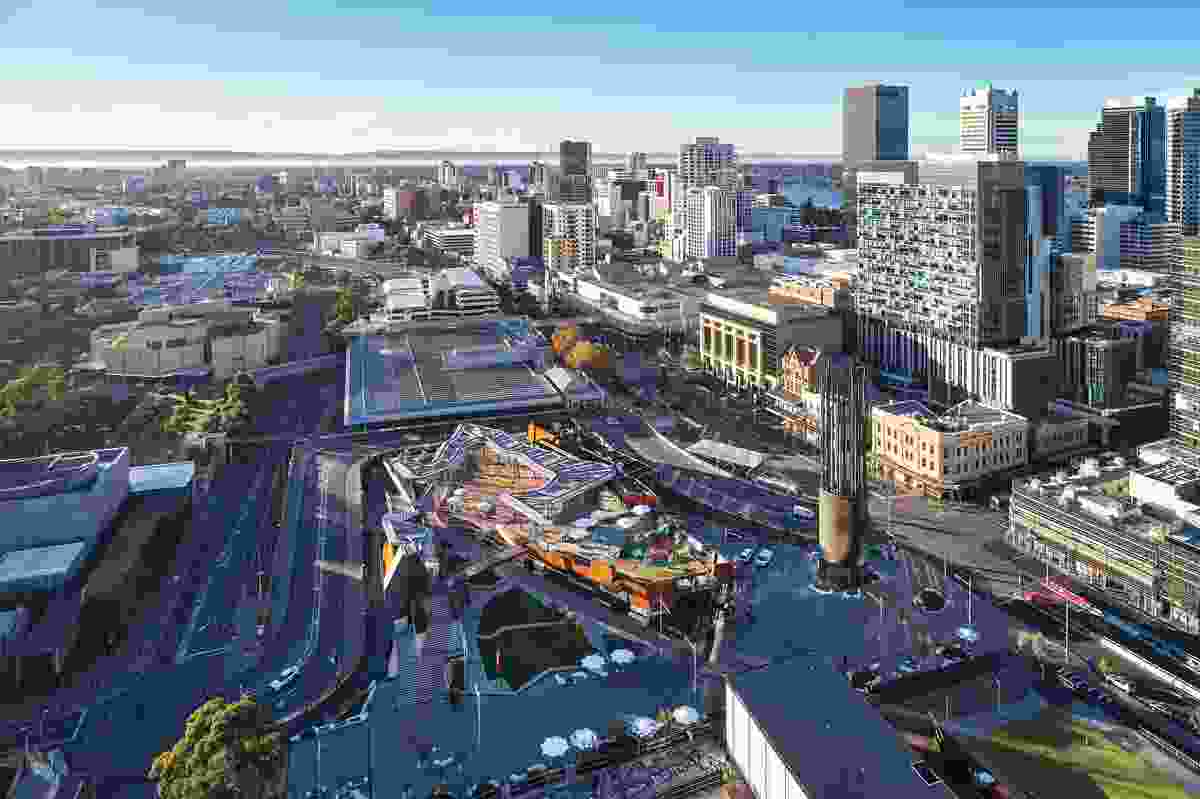 Previously separated by railway lines, the Perth CBD and Northbridge are now connected by the multi-level development. 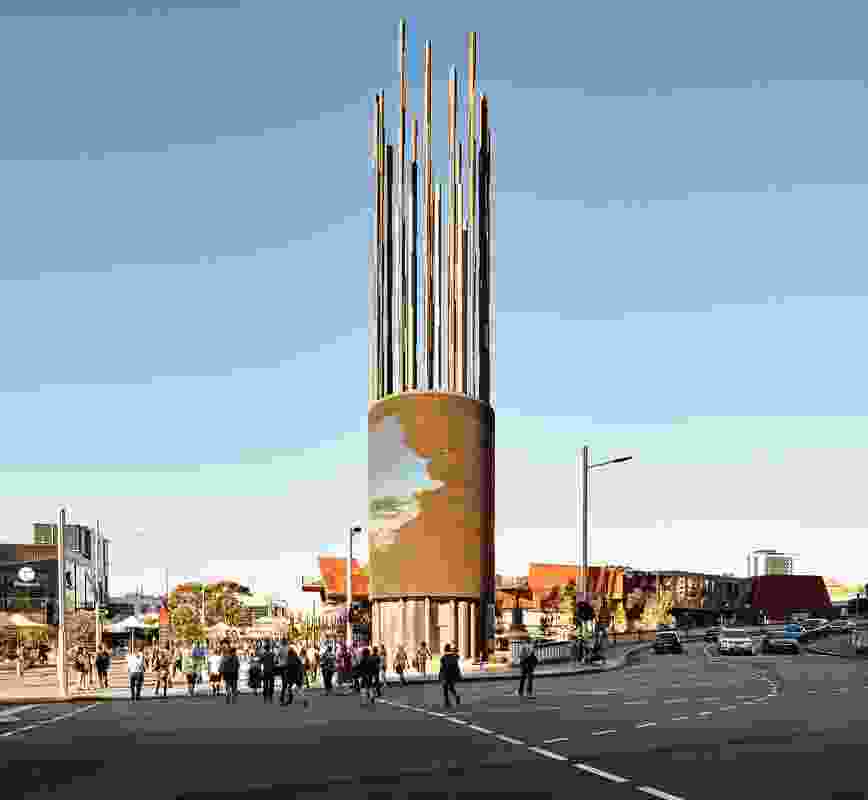 The digital tower at the entrance to Yagan Square includes fourteen “reeds” that represent the site’s original wetlands and the fourteen language groups of the Nyoongar nation. 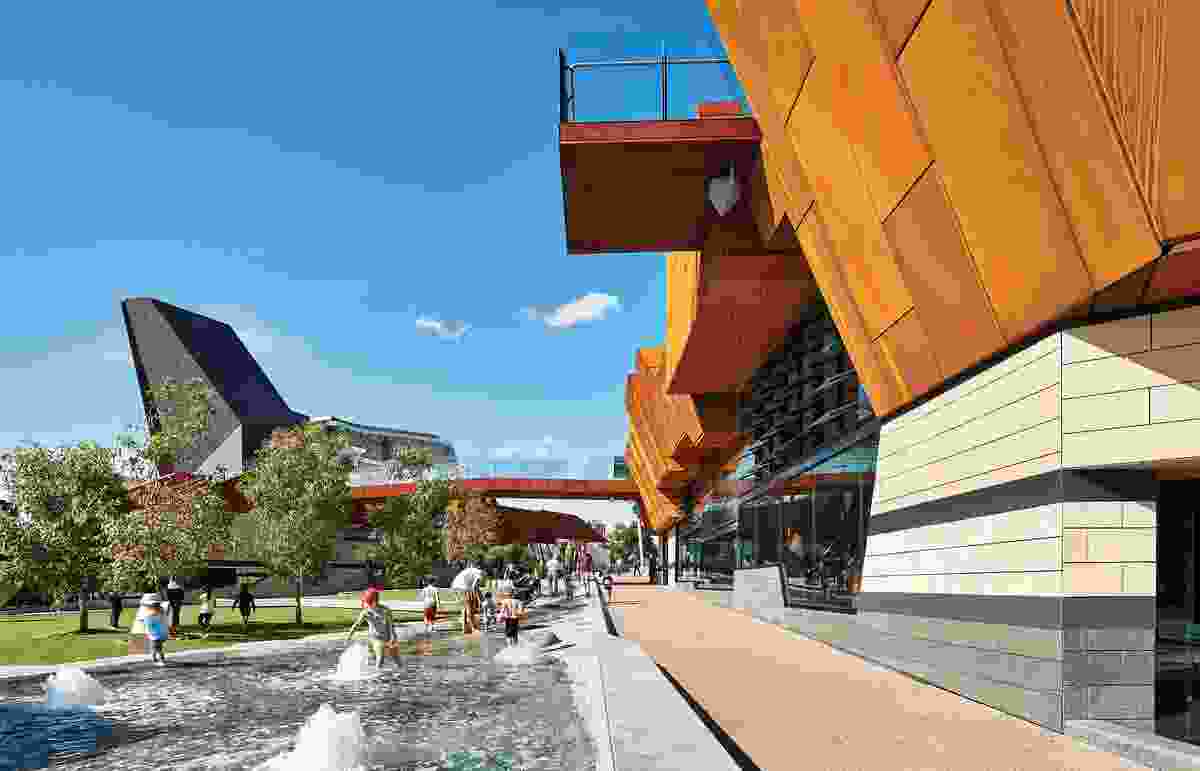 Water features prominently throughout the development, with a series of connected experiences reflecting the site’s past. 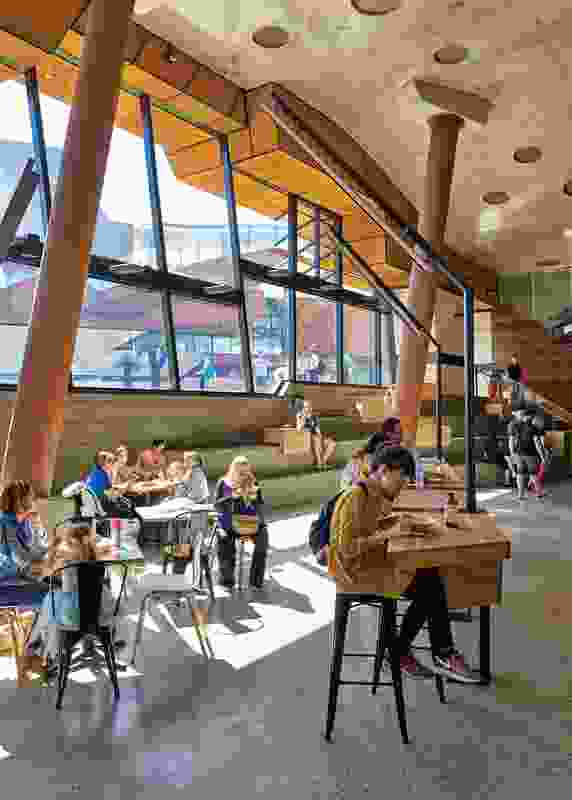 The Market Hall, a largely internal space that sits under the topography, is the project’s commercial component.