Ian Moore Architects was established in 1990. The practice was known as Engelen Moore between 1996 and 2005 when it reverted to it’s original name. Ian has taught at Sydney University, University of Technology, Sydney, The University of New South Wales and the Sydney Institute of Technology. Ian has also been a speaker and guest lecturer throughout Australia as well as New Zealand, Singapore, Japan, Malaysia, Germany and the United Kingdom. The practice has won numerous national and international awards and has been exhibited in Sydney, Melbourne, Brisbane, Singapore, Bangkok, Tokyo, Dublin, Glasgow, London, Munich, Berlin, Vicenza, Buenos Aires and included in the Venice Architecture Biennale in 2008 and 2012. 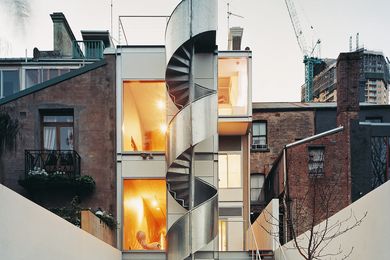 Ian Moore cleverly transformed this home into two apartments, reconfiguring the layout and making the most of unused space.