Catherine Rush has worked on numerous high profile public urban projects in Melbourne and Sydney. These include the Shrine of Remembrance, Victoria and Docklands Park Melbourne — both AILA award-winning projects. She is widely accepted in the profession as being uniquely gifted in design generation and representation, and as Principal Urban Designer is responsible for the creative direction of the practice. Her experience as an urban designer brings a complementary focus to the partnership, enabling us to maintain a sense of the ‘big picture’ while working on detailed design problems. Catherine prepared the concept design of Docklands Park that forms the 2.5 hectare centrepiece of Melbourne’s newest public domain, Docklands, adjacent to the new Collins Street extension. Other public domain projects include the University of Canberra Masterplan, design of parks for International City in Dubai and the landscapes for eleven new State Primary schools. Catherine has also contributed to the Ringwood and Footscray Transit Cities projects for new Activity Centres under Melbourne 2030. 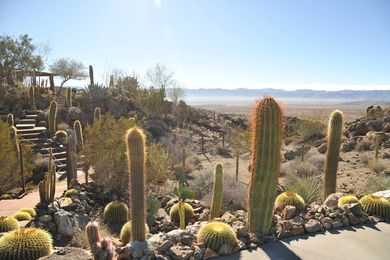 Michael Wright and Catherine Rush visit a spectacular high-altitude, dry-climate garden in the south-west of the USA.