Dwarfed by the steep Richardson Range in an isolated patch of Central Otago, Aro Hã blends into the landscape with its serrated rooflines, timber exteriors and schist detailing.

Ãnãpãnasati – the mindfulness of breathing – is a form of Buddhist meditation. The word Ãnãpãnasati literally means to be notice or be aware of the sensations caused by movements of the breath. The modern Western practice of mindfulness could be described as aiming to achieve a clarity: a non-judgmental focus of one’s attention on the emotions, thoughts and sensations occurring in the present moment.

It is here, in the realms of mindfulness, that Aro Hã was conceived. The centre is a retreat set in the subalpine glacial valleys of central Otago and its concept was initially developed by Queenstown-based American Damian Chaparro, who describes himself as a wellness architect.

While designed as a place for rejuvenation of the human spirit, the retreat simultaneously acts as a teaching facility for a permaculture-based regenerative self-sufficient way of living. “Aro Hã brings people together to learn about nature, about the world, and ultimately about themselves. Aro Hã models a transitional path toward a regenerative relationship with our planet. We’ve done our best to design a place that meets the needs of the present without compromising our future,” Chaparro says.

There is a calmness about Aro Hã. From the road, the cluster of 11 buildings that make up the campus is barely visible. The serrated rooflines, vertical timber exteriors and schist detailing could, from a distance, be dismissed as a rock outcrop.

As you make your way up the winding, unsealed path to Aro Hã, the buildings’ size becomes more apparent as do the daunting heights of the surrounding peaks. Dwarfed by the steep Richardson Range, which rises behind it, the campus offers an instant reminder of the fragility of human existence; the buildings form a physical gauge – in their scale compared with the expansive, isolated landscape – of the ethereal permanence of the alpine milieu.

The word ‘aro’ means to focus and direct, while ‘ha-’ translates as the breath of life. For Chaparro, and architect Hugh Tennent – who is also a meditation teacher – the words had an innate, and intimate, meaning. It was one of a journey: a journey to renewed connection with oneself, with the environment and with others.

Set on 8.4 acres, 25 per cent of which is planted in food production, the campus incorporates 11 buildings over two sites. The first, and highest site is the retreat itself: two main buildings, a spa building and five accommodation blocks. On the lower site sit the staff quarters and the ‘grunty’ heart of self-sufficiency. An expansive, ground-based solar array resides here, along with seedling production areas, soil handling and long and short-term staff accommodation. The campus is able to operate entirely off the grid, and utilises the first distributed heat scheme in New Zealand.

All the buildings are clad in vertical cedar, the interior of the main building continues the timber theme, the walls are Siberian larch, the floor American oak, and the laminated posts New Zealand pine. There’s a cleanness about it: an understated opulence in the rich and consistent use of timber. Outside, local schist prevails in the form of walls, pavers and detailing.

The entrance journey through the main community building passes an intimate reading and relaxation room and opens out into an open-plan kitchen area, which leads to a greenhouse and citrus nook to the north, an adjoining open teaching kitchen, and to the south, expansive windows facing the fall of the land, which tumbles down to the emerald waters of Lake Wakatipu.

The arrival sequence is completed with an exit from the community building – a transition designed to maximise the visitor’s experience of the elements – and entry into the adjacent hall, where the teaching space, or Aro Hã Room, resides. Oriented towards the lake, it is a balanced room: square and symmetrical. The main window is almost invisible; its glass disappears into the intense beauty of the landscape it frames. Tennent described this outlook as “one to assist the mind to quieten… The fall of the land, and the sky, encourages the capacity of the mind to be spacious.” The symmetry of the room’s footprint is enhanced by a white, soft ceiling that drapes down towards the view, letting the walls be the volume.

From the exterior, these two buildings are simple forms. As Tennent said: “mute boxes. They are timber and zinc-clad boxes, carved out to create eaves and entrances”. However, the main community building boasts a structure formed of triangular frames constituting the greenhouse to the north.

The accommodation buildings below move away from the box-like consistency of the two main buildings. Their serrated rooflines are more dynamic: representative of the dynamism of the landscape – the glaciers and clouds. The juxtaposition of the two styles on the site leaves a more sincere, lasting impression than does the mountain chalet vernacular which the Queenstown-Lakes area continues to embrace.

Three of the cranked accommodation buildings incorporate four double rooms with shared bathrooms; the others are single rooms. These, while offering shared accommodation, are private. It is clear these are the places to retreat to. Here, the focus is not so much on the lake, but on other aspects of the landscape. Carefully framed views are captured from each room – each window offering just a glimpse of the dramatic surrounds.

There is an enviable calmness about the site as a whole, which probably lies in its simplicity. Or, perhaps it is gained from the aim to align ancient wisdom with modern sustainability. While the obvious signs of this are the permaculture elements of food and energy production, the solar arrays that adorn the roofs, the in-ground food cellars insulated with green roofs, the seedling production, orchards, and countless trees and vegetable gardens, the architecture itself works to enhance these prosaic functional elements.

Overall, the muted palette of the campus and its juxtaposed forms blend in with the isolated environs. The campus rests into the topography, promoting a stillness; a subtle moment reflecting, yet taking part in, the expanse of beauty in which it sits. 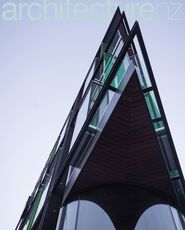 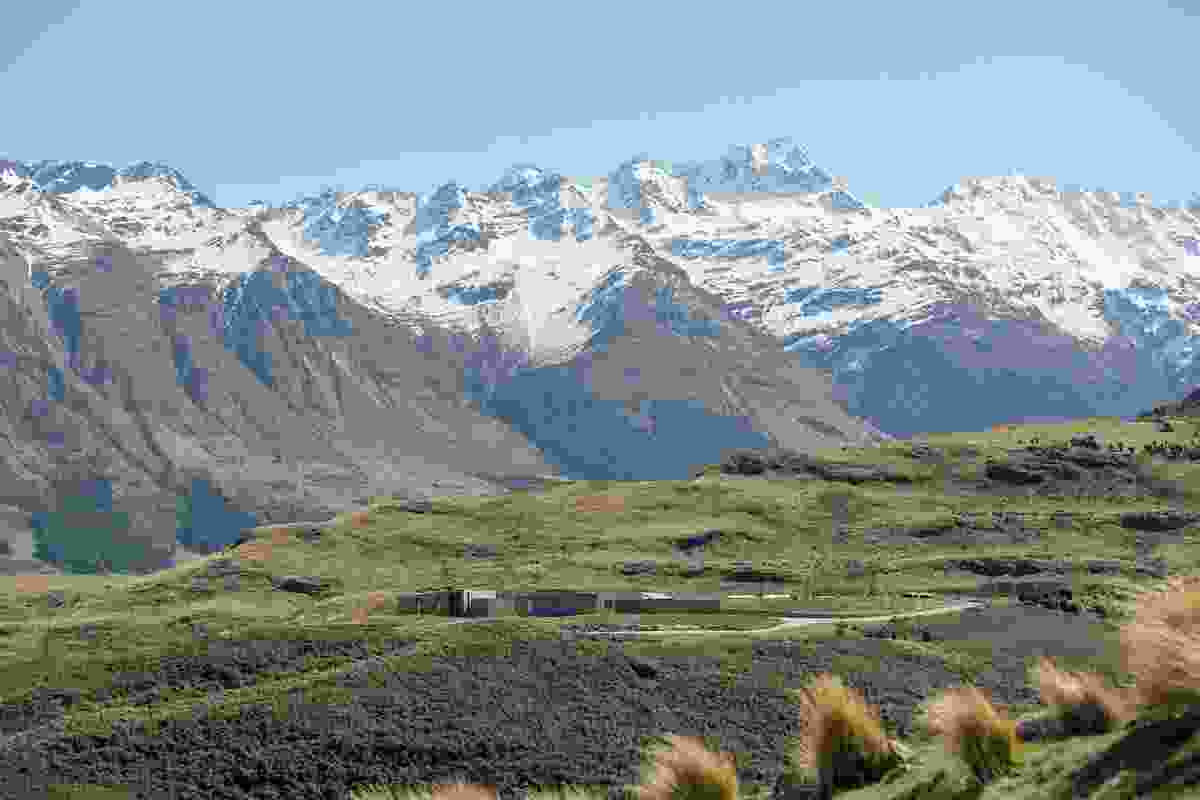 Dwarfed by the steep Richardson Range in an isolated patch of Central Otago, Aro Hã blends into the landscape with its serrated rooflines, timber exteriors and schist detailing. 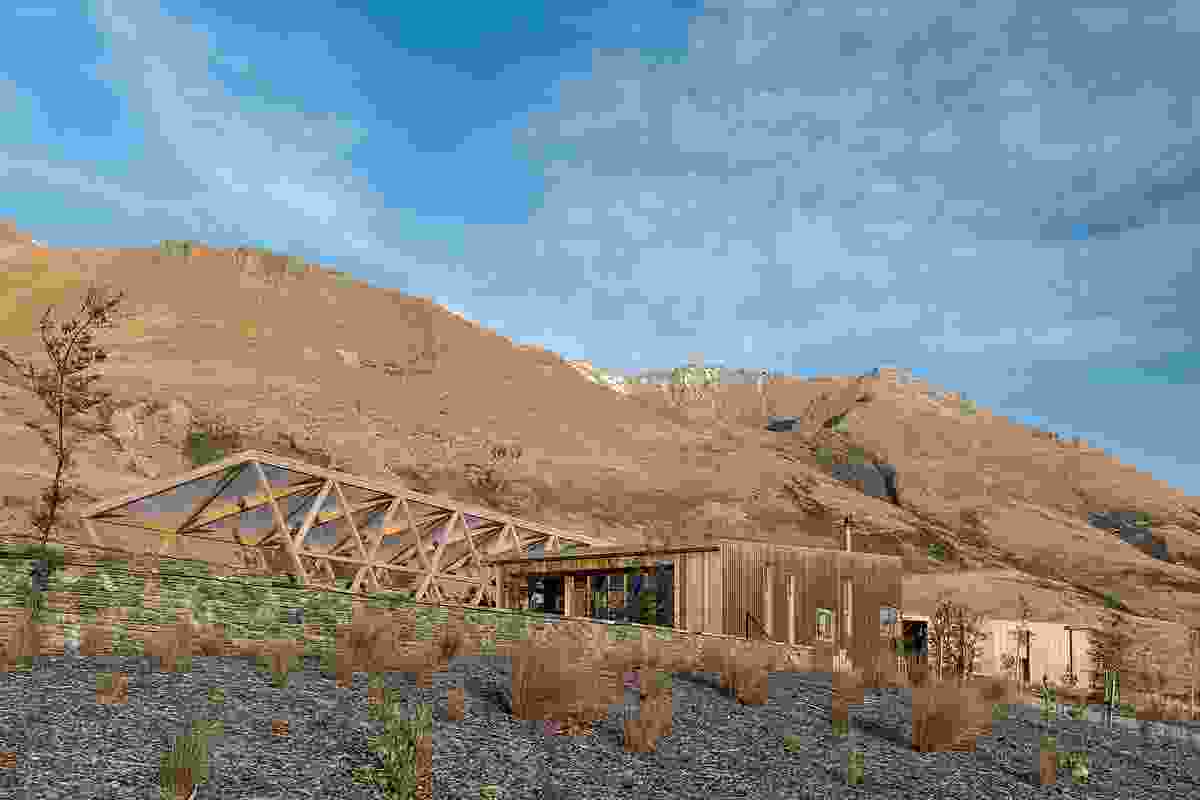 The main community building incorporates a teaching kitchen, which leads out to growing ares, a greenhouse and a covered citrus nook. 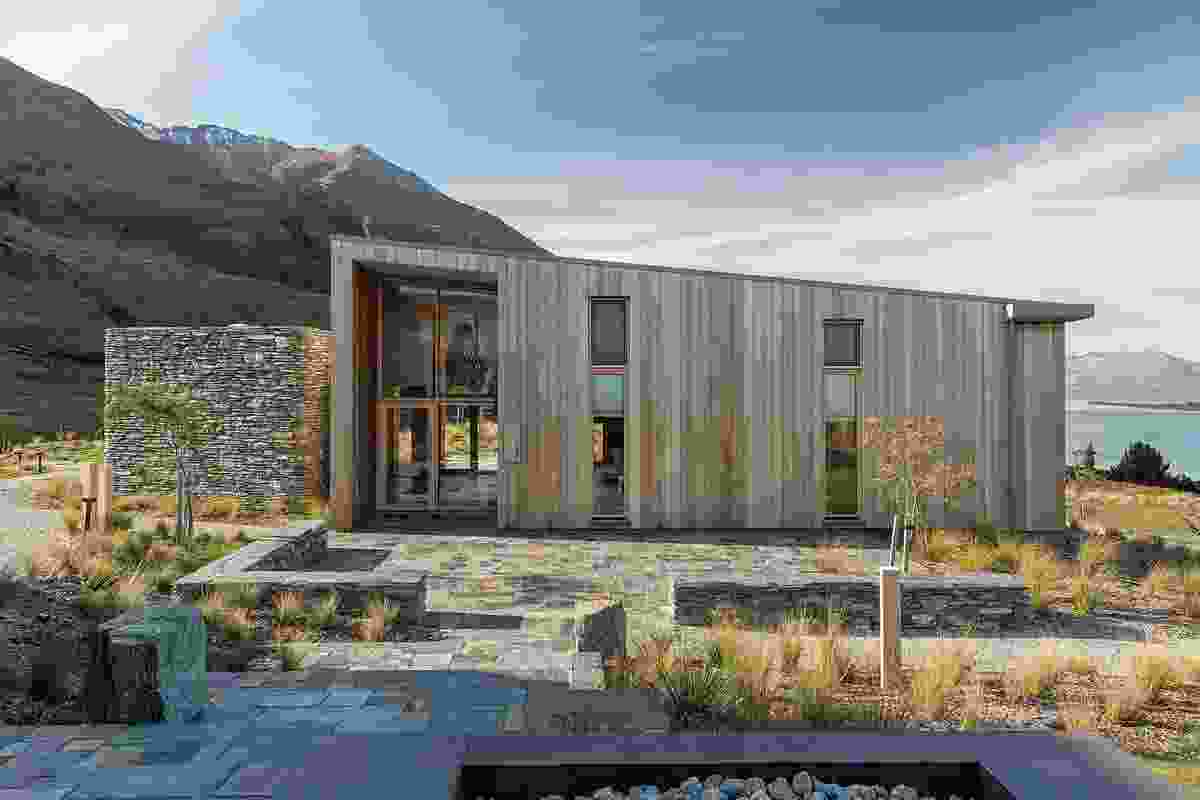 Set within a luster of 11 buildings on two sites, the Aro Hã Room is essentially a teaching room, used for yoga, meditation and strength training, oriented towards the lake. 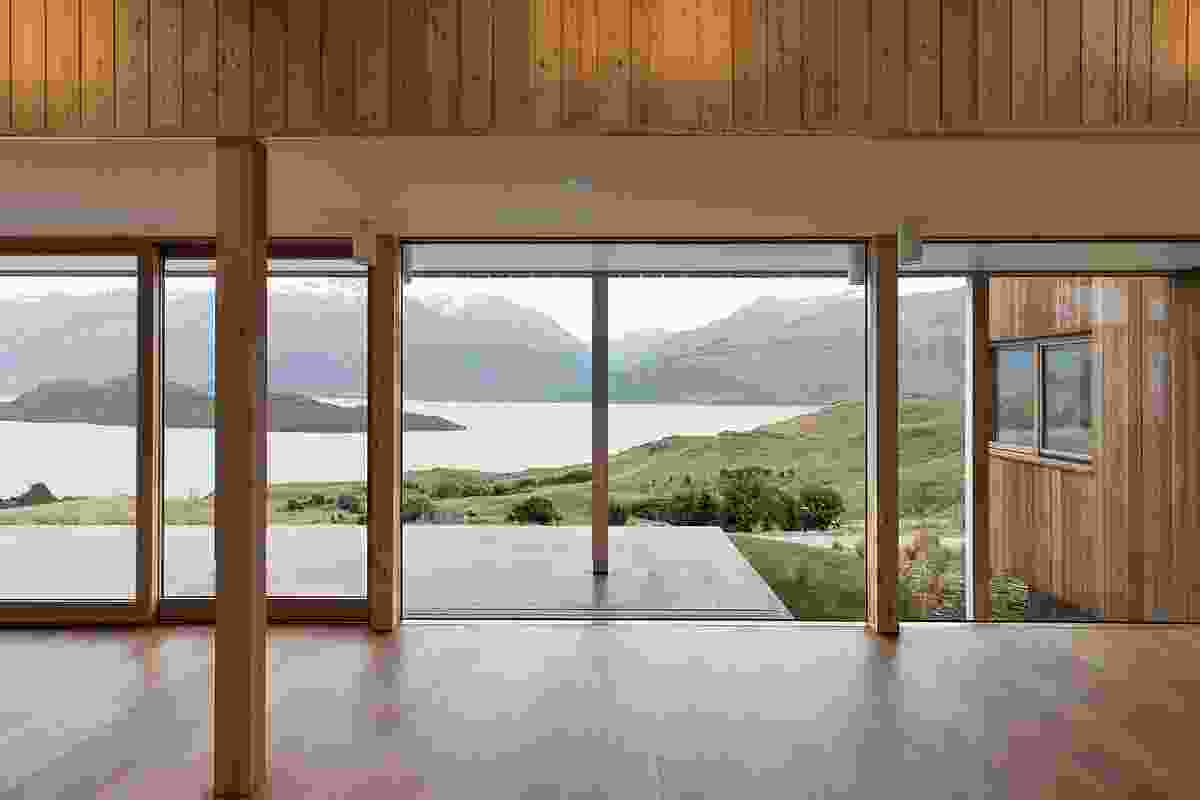 Expansive lake vistas are framed in the community building, centered on the body of the water at the end of Lake Wakatipu where Pig and Pigeon Island lie. 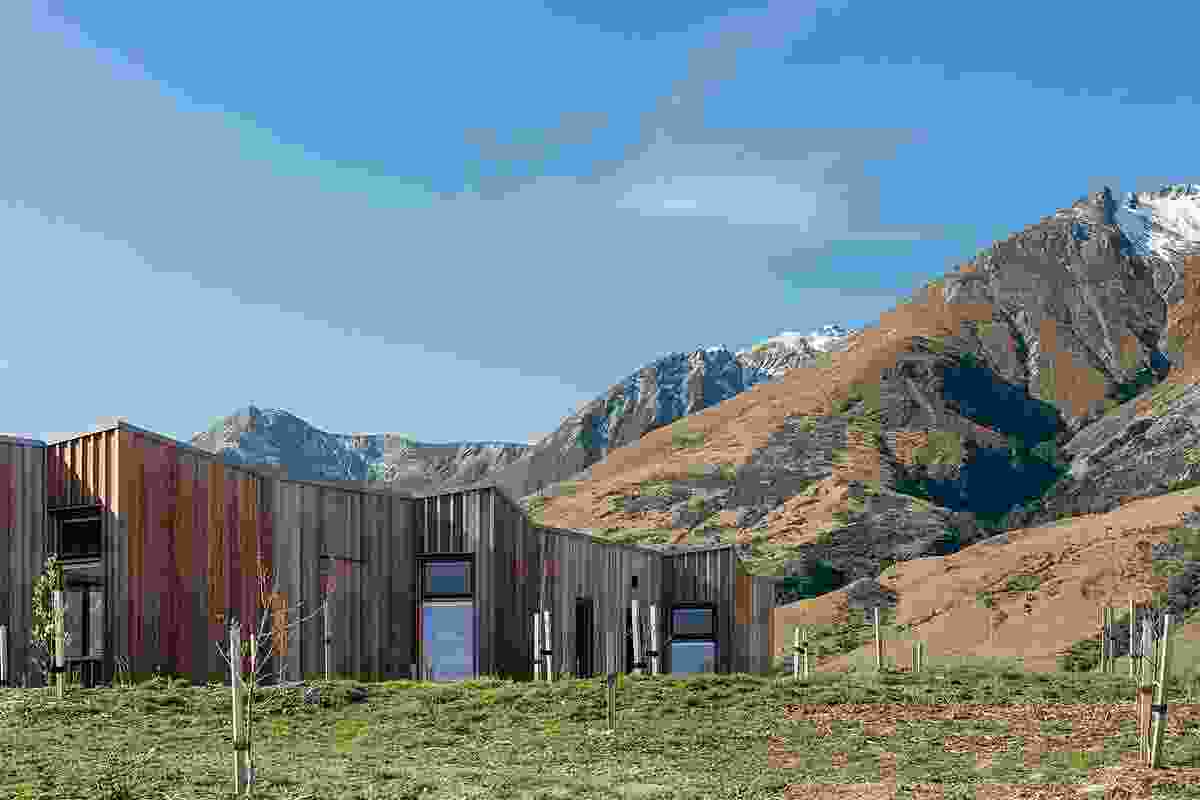 The serrated rooflines of the accommodation buildings are representative of the dynamism of the landscape. 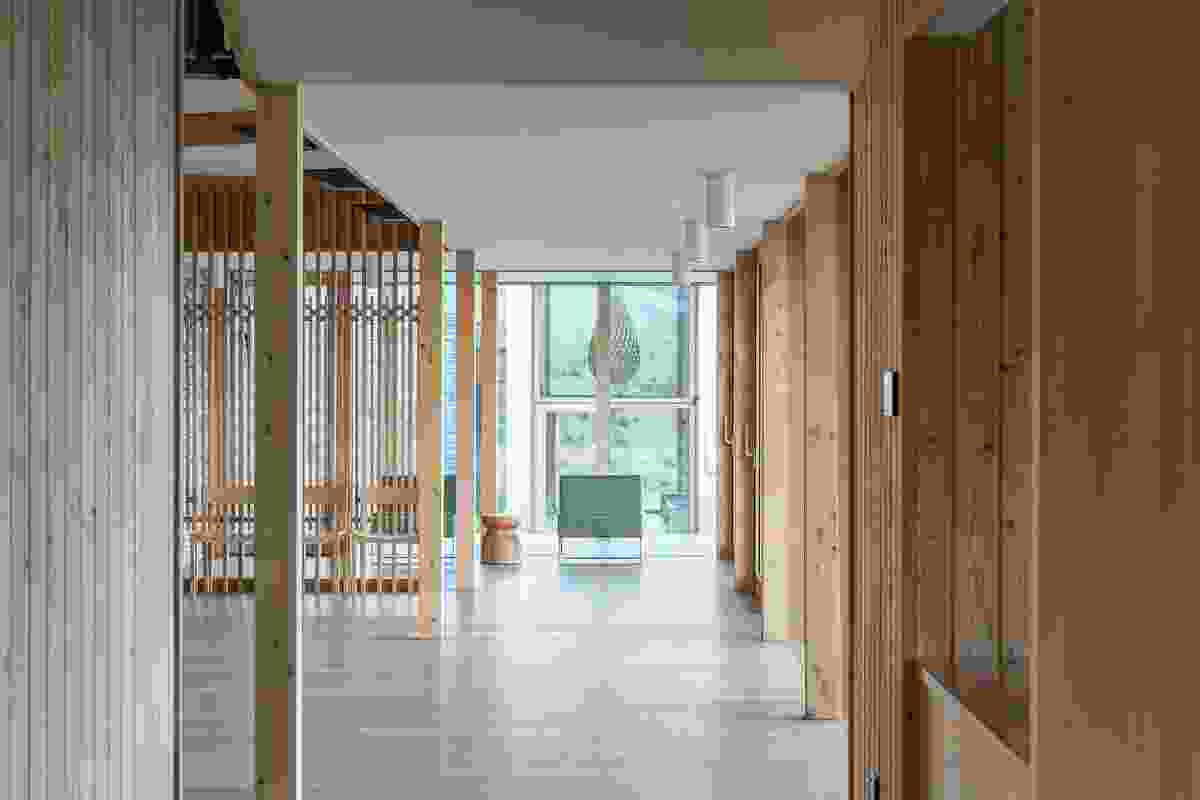 Vertical timber is a striking feature of the interiors of both the main community building and the Aro Hã building.