Bali is experiencing an exciting evolution from party island to international dining destination, buoyed by the likes of Bikini in Seminyak, a new fine dining restaurant designed by Travis Walton Architecture.

In the open-air cocktail bar, timber screens the overhead soffit and bar front, while marble counter- tops and brass-lined stools speak of influences from New York and Miami.

When it comes to Bali, there are generally two camps. Firstly, there’s Camp A – the Aussies that love Bali. They’re the ones boarding Jetstar flights in their Havaianas and kaftans, already doing the sums on how many $6 massages and $1.50 Bintangs they can fit into any given day. And then there’s Camp B, the ones that just don’t “do” Bali. They’re the ones who don’t do low-cost airlines, they don’t do street food and loud nightclubs, and they definitely don’t do cheap “Ray Bann” sunglasses. But with more than one million Australians visiting the Indonesian island of Bali each year and more than 10,000 Australians making it their main home, there’s something in the Bali waters right now, and it’s taken hold of the hospitality scene.

In the past year, there’s been a band of Australian chefs, restaurateurs and creatives staking their claim in Bali. Sydney’s Maurice Terzini of Icebergs and The Dolphin has opened an Italian osteria/pizzeria, Movida’s Frank Camorra launched a Balinese outpost, and former Ksubi fashion designer George Garrow has thrown open the doors to a twelve-suite boutique hotel and cafe in Canggu. These exciting venues quench the thirst and hunger of the culinary jetsetters, but also fattens out the to-do list of the zealous design travellers. One new addition that will gratify the foodies, the design dabblers and the PYTs is Bikini. The 120-seat bar and restaurant is the latest venue from restaurateurs 8 Degree Projects, headed by Australian expat Adam McAsey. Bikini marks the fourth Bali venue by McAsey, all of which have been designed by Melbourne-based Travis Walton Architecture with branding by 21-19. The four venues – Sisterfields cafe, BO$$ MAN burger shop, Expat coffee roasters and now Bikini – sit side by side, occupying one of the busiest corners of upmarket Seminyak. Of all the venues, Bikini shouts loudest to the street with a pink neon sign high above its forecourt declaring “U LOOK HOT IN (A) BIKINI.” The “A” flickers in and out of view, inviting two different readings – one of flattery and one of subtle instruction. The vivid display is a little reminiscent of the courtship behaviour you see by tropical male birds or young men in Kuta, but it is a purposeful tactic to capture the attentions of passers-by and encourage them inside.

Once through the front entry, visitors can pick a spot in the open-air cocktail lounge, with the “disco art-deco” service bar on the right and plush banquette seating on the left. The space has been designed as a place for people watching, and for many tourists this is exactly what they feel like doing on their first nights as they take in their surroundings. Timber screens the soffit of the overhead private dining room and the bar front, while marble countertops and brass-lined stools speak of influences from New York and Miami. McAsey says bar dining is hard to find in Bali because of the language barrier between staff and patrons, but McAsey and his team have spent time training the staff at Bikini so that “you can perch yourself up at the bar and the bartenders can hold their own and keep the conversation going all night.”

The bar runs around the corner and into the purpose- built double-height concrete structure that houses the main dining space. The western and northern walls are flanked with curvy leather dining booths. The booths have low backs, designed that way so diners can crane their necks and strike up a conversation with their booth neighbours. The swivel chairs at the bar encourage the same thing. Above the booths, custom-designed wall sconces – delicate and lovely orbs – run the length of the wall, illuminating the white marble dining tables that have been inlaid with fat stripes of grey marble. The western wall is almost completely cloaked in a mural by Melbourne artist Ash Keating, who filled up fire extinguishers with pink and white paint and sprayed the wall. The result is a dynamic curtain of colour that appears to drip down the wall.

If Bikini were located in Melbourne or Sydney, it’d make an impression. The fact that it’s in Bali, where logistical, labour and quality-control nightmares abound, makes it even more impressive. It’s time those haughty Camp B-ers checked out the next Jetstar sale.

Other
Mural on dining room wall by artist Ash Keating. 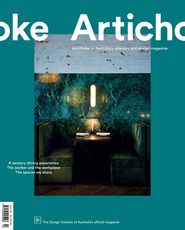 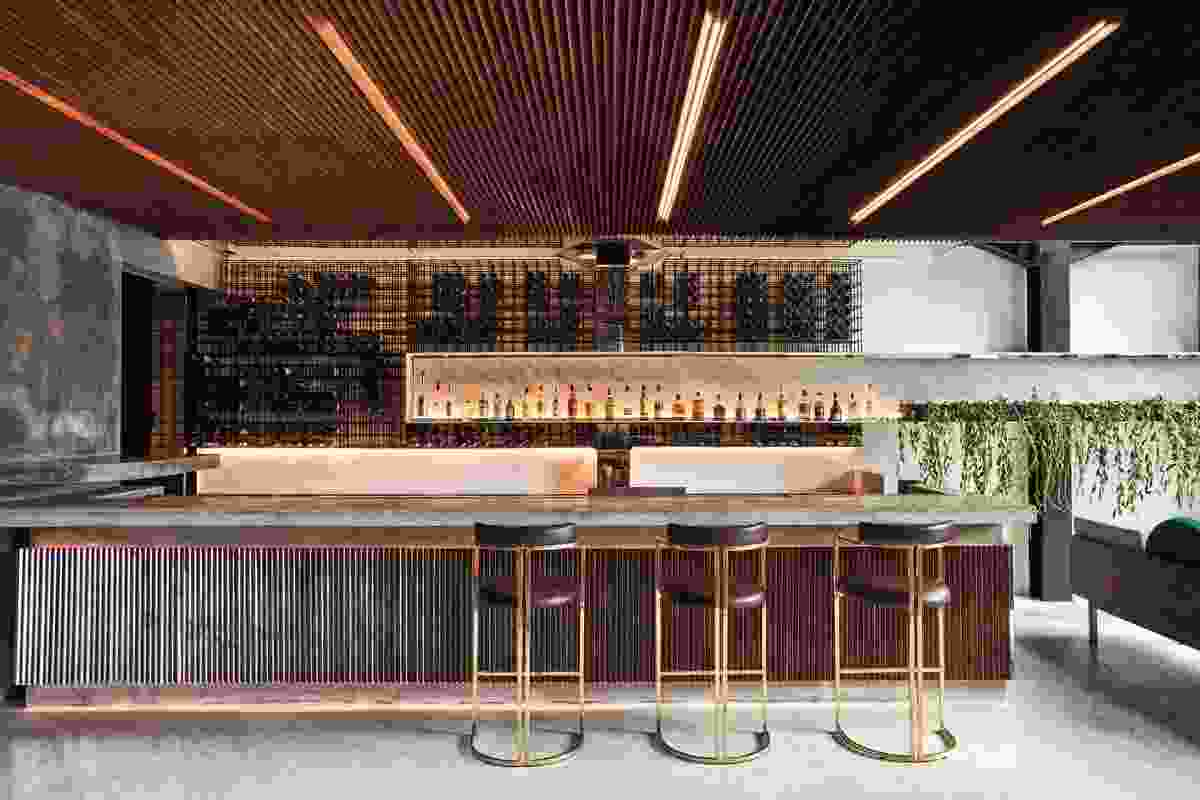 In the open-air cocktail bar, timber screens the overhead soffit and bar front, while marble counter- tops and brass-lined stools speak of influences from New York and Miami. 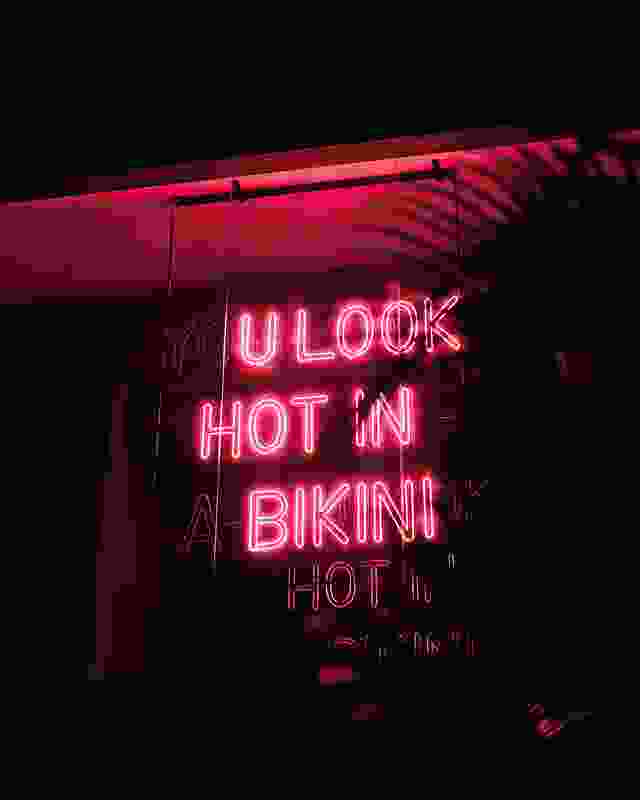 The “A” in Bikini’s pink neon sign flickers in out of view, inviting different readings. 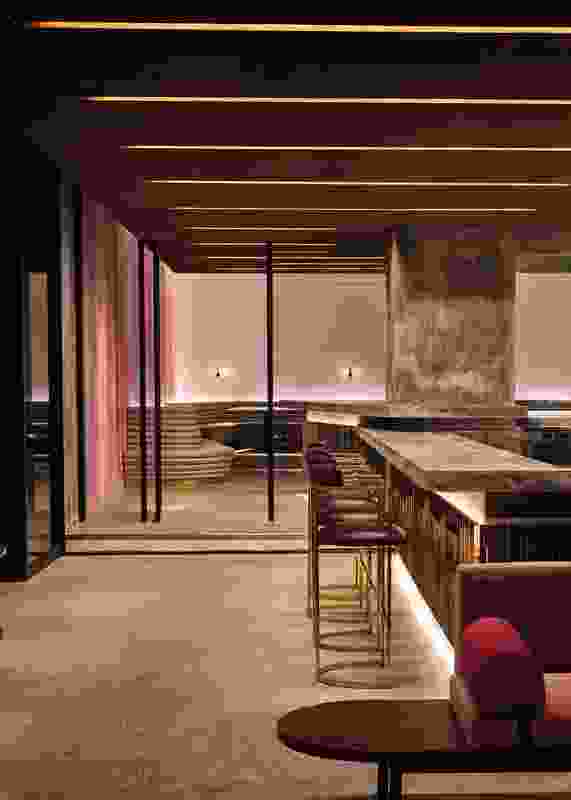 From the front cocktail bar, guests are lead into the main dining space. 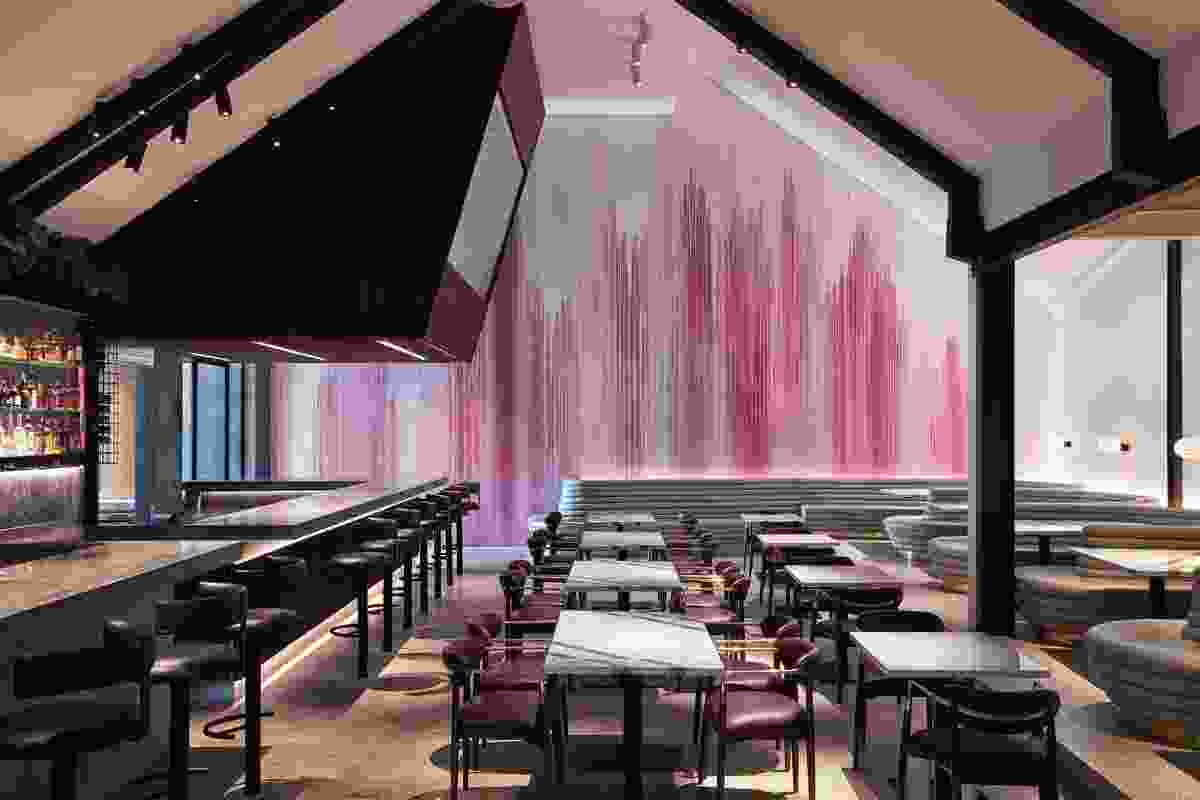 The western wall is cloaked in a pink-and-white mural created by Melbourne artist Ash Keating. 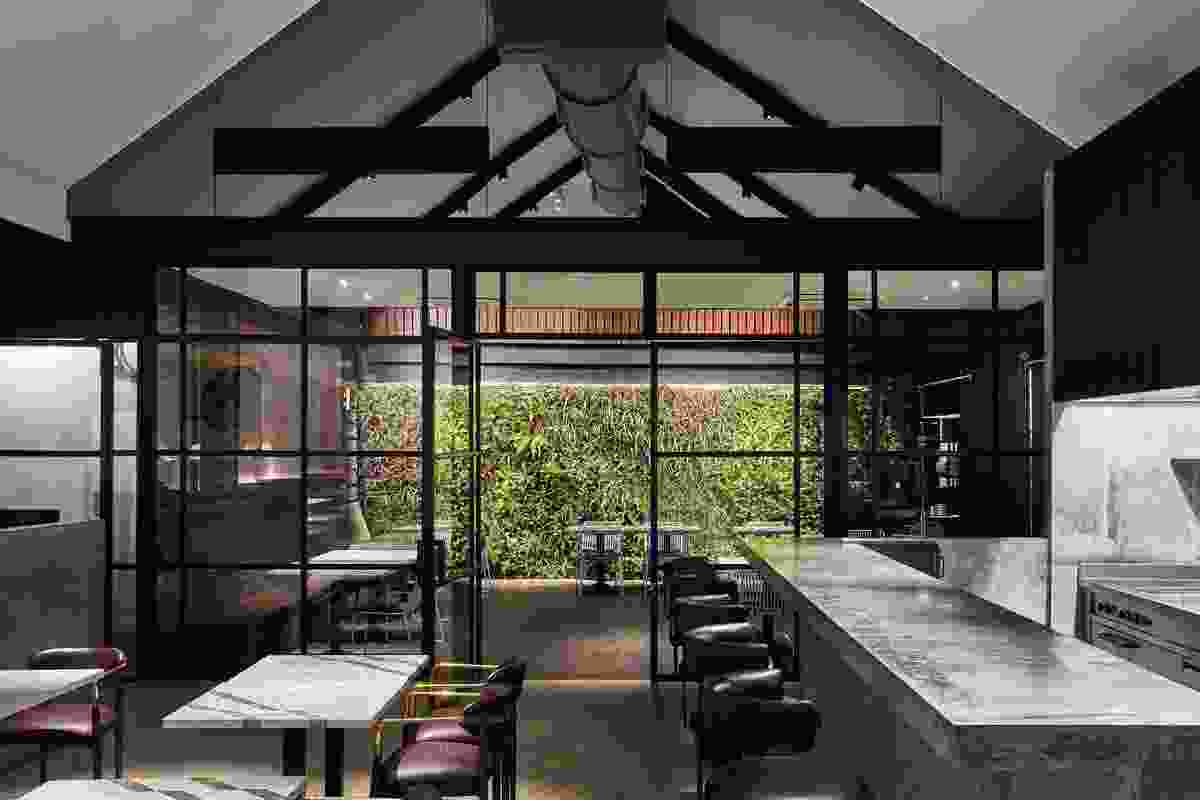 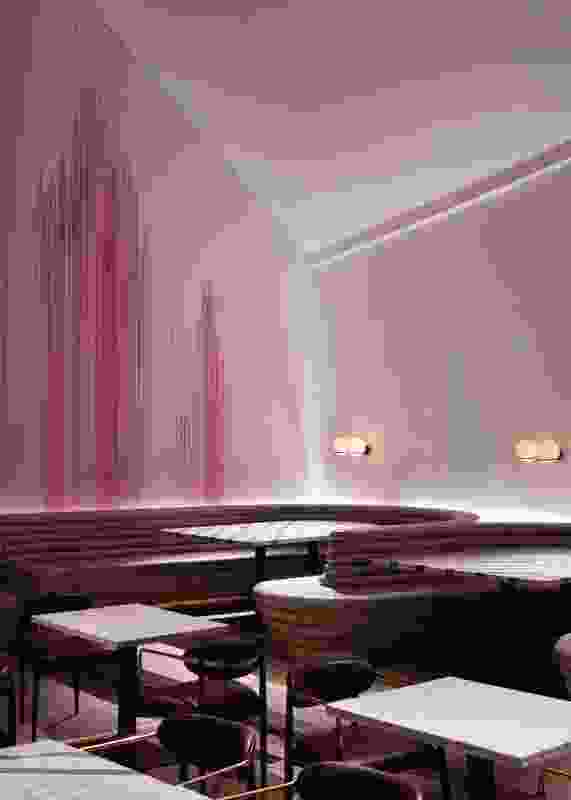 The restaurant’s booths have low backs so diners can crane their necks and strike up a conversation with their booth neighbours. 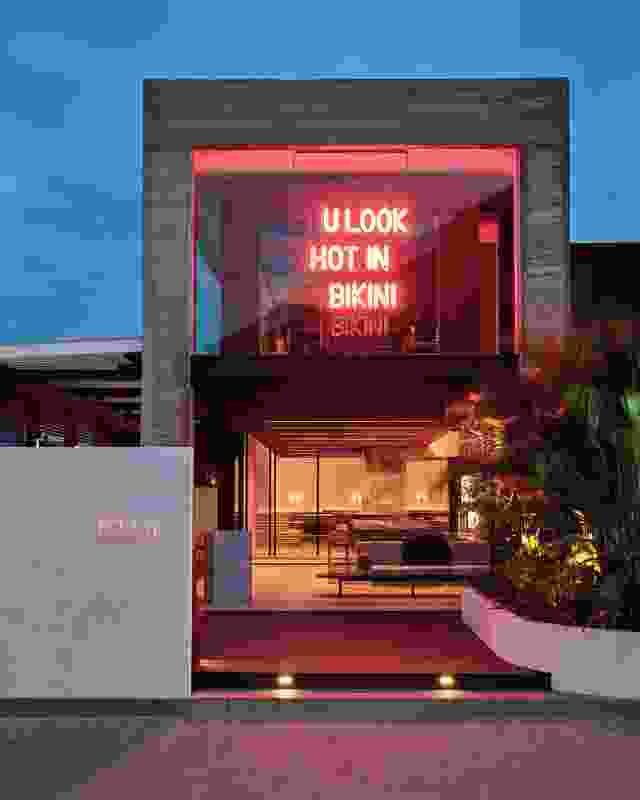 Bikini, occupying a busy corner of Seminyak, has a neon sign that captures the attentions of passers-by and encourages them into the venue. 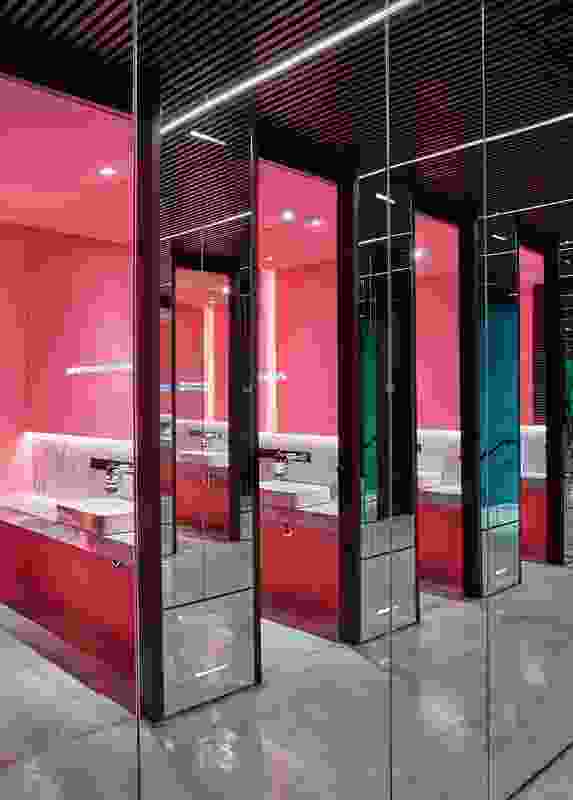