Circular windows, arched doorways and a spiral staircase contrast with the box-like form of the building.

Melbourne is famous for its laneways, but it’s more known for its central city alleyways than suburban back streets, which are often underutilized and neglected. However, like the revitalization of the city’s laneways, Melbourne homeowners are also beginning to see the value in their forgotten alleyways for the potential opportunities they can create on their property and for their contribution to the neighbourhood in general.

Brickface in Richmond, Melbourne, is one such development. Designed by Austin Maynard Architects, the two-storey building at the rear of a property contains a garage, studio and rooftop garden. Functionally, it provides flexible and adaptable spaces for the homeowners; visually, it offers a sculptural wall behind the swimming pool and a robust bookend at the corner of the laneway.

The clients – a family with a teenage daughter – purchased the property 15 years ago and knocked down the original house to build a new one. They never finished the backyard, however, and used the existing building, which had a garage and studio as a storage space. As their daughter grew up, they realized the untapped potential of the building – albeit a new one – and they engaged Austin Maynard Architects to create a comfortable and practical space that had the existing functions, but included a productive garden, swimming pool and outdoor space that flowed from the rear of the main house.

The new building would also provide a backdrop at the end of the garden, as viewed from the kitchen and dining room. Architect Mark Austin was therefore concerned about its height and materiality, wishing to create a sculptural and interesting form that was more efficient in size than its predecessor and that related to the visual language of the laneway.

Brickface appears almost like an object at the end of the garden. Its square and solid form is constructed with brick (a humble and understated material); it’s composed of basic geometric shapes (rectangle, square, circle and arch); and it has primary colours (red and blue) for accent. However, while Brickface may be made up of common materials, forms and colours, its final form is anything but as it presents a playful personality.

On all façades, the recycled red brick has nuanced texture and colour. Facing the house, red and blue glazed bricks project from the building introducing light, shadow, colour and pattern. Bordering the laneway, the building is robust and secure as if it were part of the neighbourhood already. Circular windows and arched doors punctuate the façade, and the spiral staircase adds further sculptural interest and shadows. A timber deck surrounding the white-tiled swimming pool stretches between the main house and Brickface, creating an outdoor living area.

The building accommodates a garage, studio and rooftop terrace with productive garden. The studio is painted blue to unify the room as a single space, while the plywood-enclosed bathroom separates it, like an inserted object.

The studio and garage have been designed for flexibility and versatility, and can be adapted to various uses. With access from the laneway and being independent from the main house, the studio is currently a leisure space for the clients’ teenage daughter. It may in the future become her separate living quarters, a studio for ageing parents, a workspace, or a rental apartment.

The garage is likewise adaptable and can be transformed into a generous living space should its current function become obsolete. “There’s been lots of ideas thrown at this little space, and it’s designed so it can accommodate any of those ideas,” Mark explains.

Brickface not only demonstrates how to revitalize a backyard to provide more functional and flexible space, but it shows how to better use Melbourne’s ubiquitous suburban laneways for more than garbage and graffiti. “If you can turn the building onto the laneway and have pedestrian access, it really cleans up the rest of the street. There’s such a large number of these spaces in Melbourne, which are being underutilized in that respect,” Mark says.

Indeed, like Brickface, these backyard buildings have the potential to provide secure and independent living and workspaces for a generation priced out of the current property market, as well as bringing more use and life to overlooked and undervalued spaces. 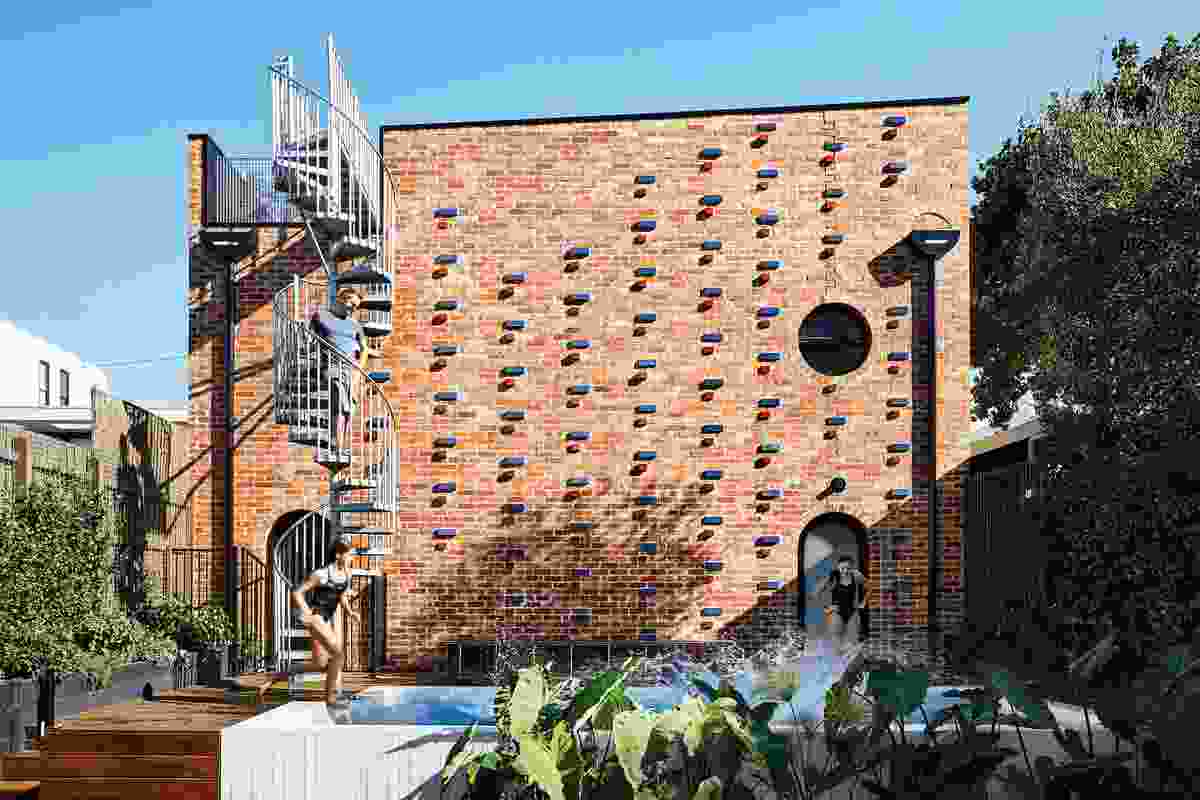 Circular windows, arched doorways and a spiral staircase contrast with the box-like form of the building. 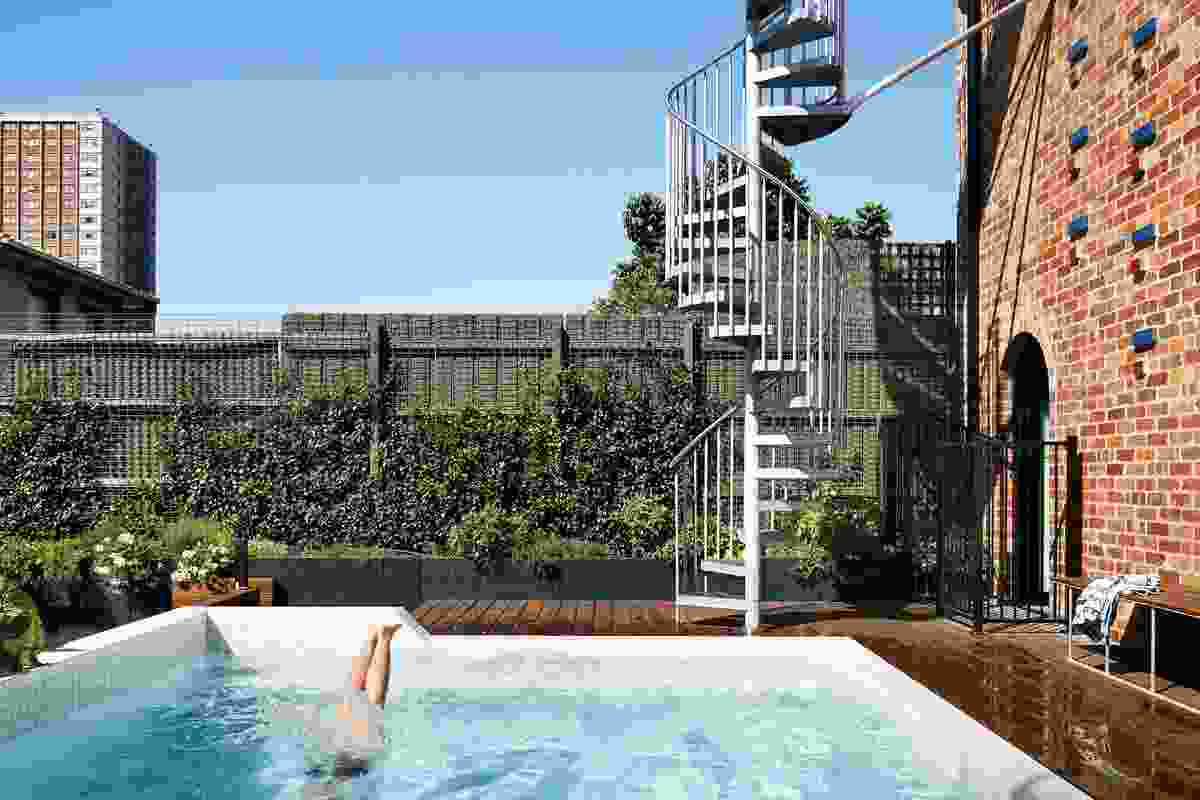 A timber deck surrounding the white-tiled swimming pool stretches between the main house and Brickface. 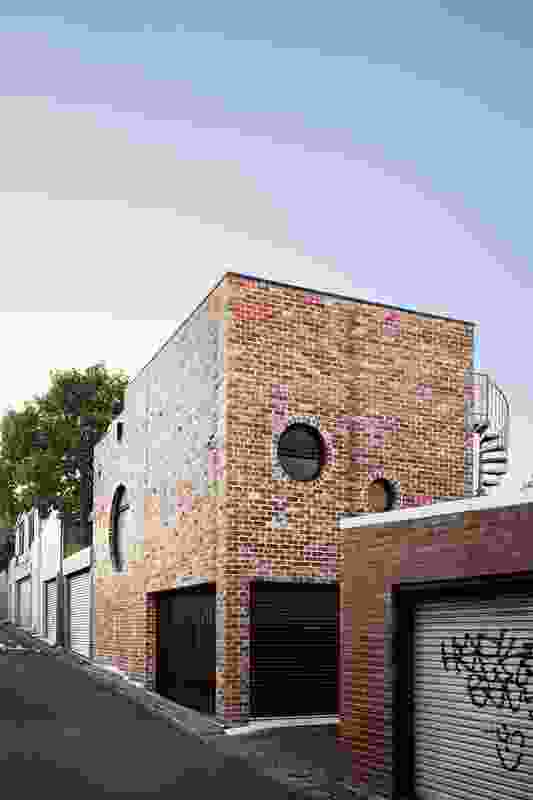 On all façades, the recycled red brick has nuanced texture and colour. 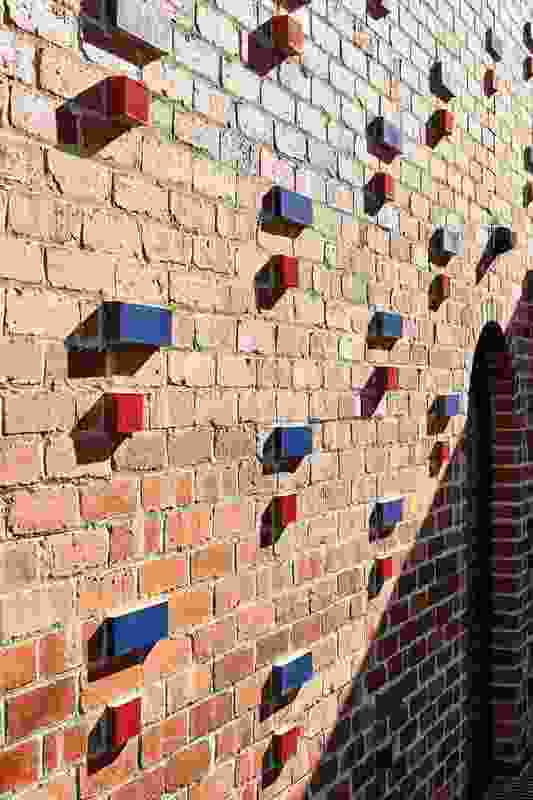 The red and blue brick accents provide a sense of playfulness and reduces the otherwise imposing nature of the brick wall. 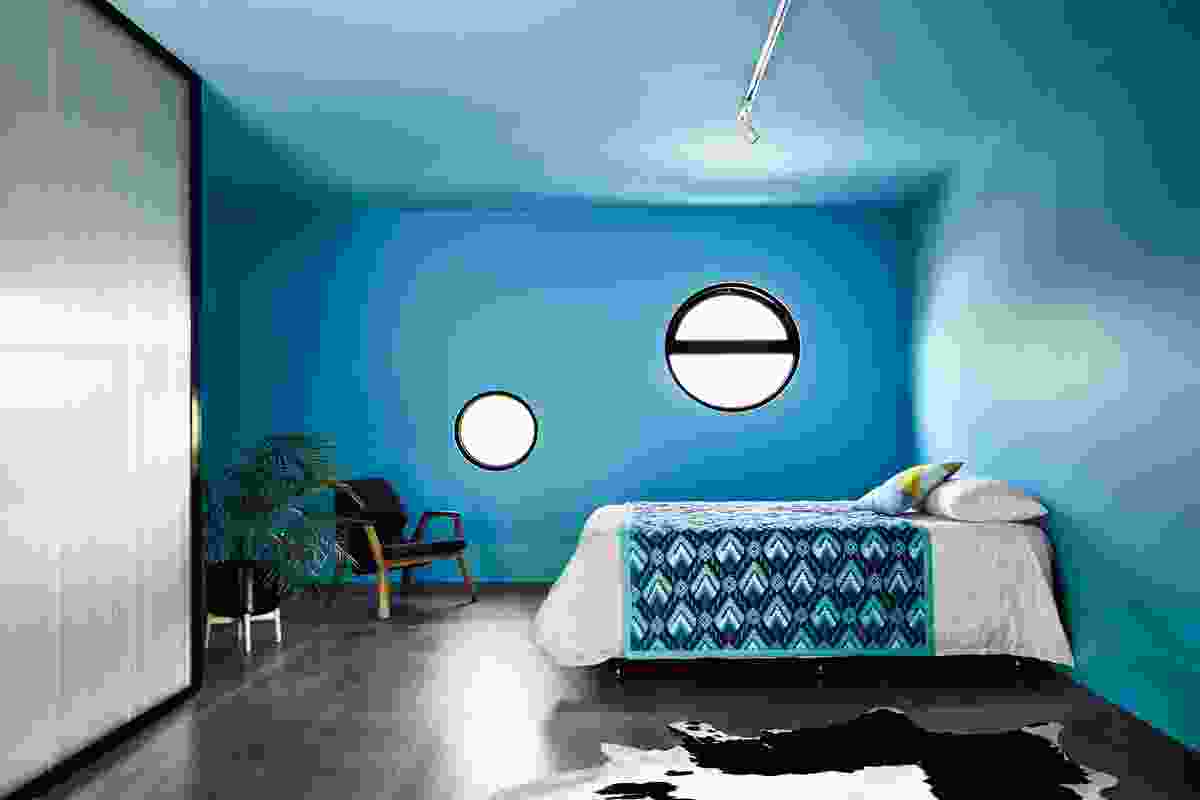 The studio is currently a leisure space for the clients’ teenage daughter. 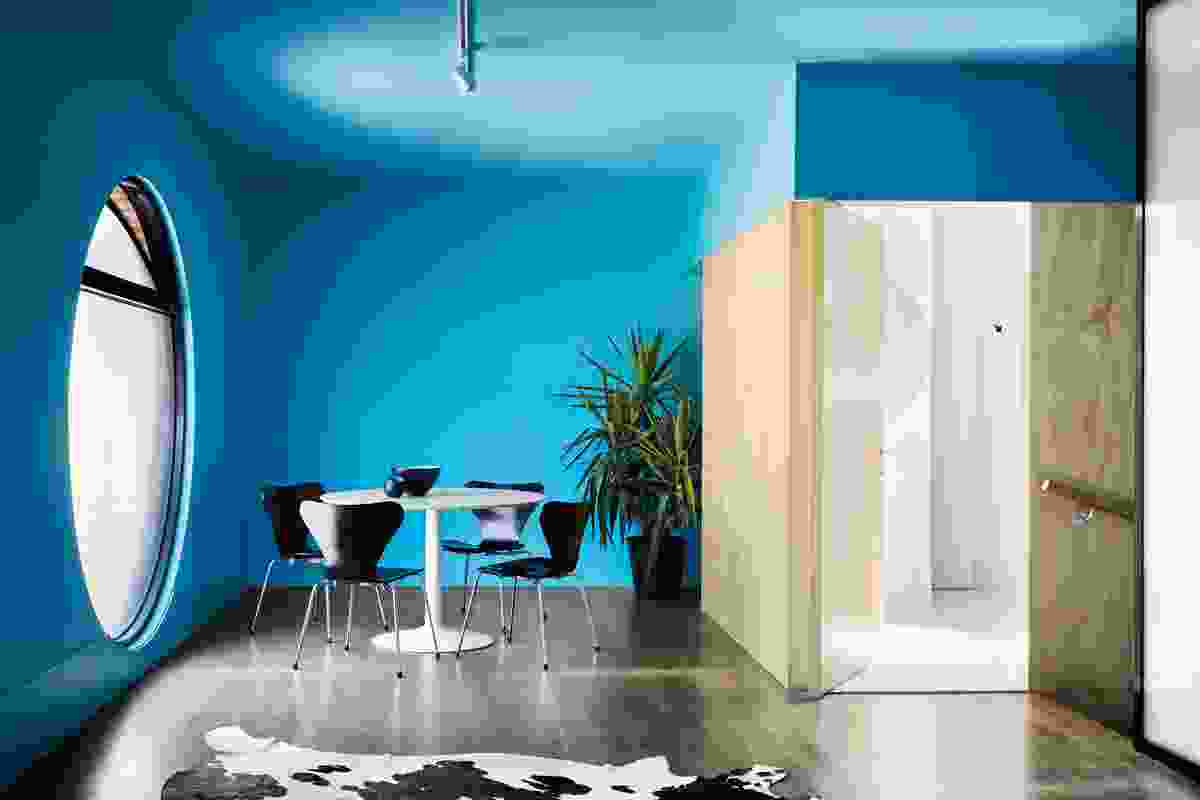 The interior of the building is painted blue and can be used in myriad ways.