Delivered under strict heritage controls, this sensitive addition to a Federation-style home creates a family abode that considers spatiality as thoughtfully as it does light and materiality.

Brimming with plants and a large pond, the courtyard is not designed as an active space but as an area to look out to. Artwork: Wanjidari.

Like neighbouring Leichhardt, Haberfield has a strong Italian community whose residents have lived in the area for many years. It’s also got some of the best Italian eateries in Sydney’s inner west and happens to boast a large percentage of Victorian and Federation homes. Most of the seemingly perpetually sunny suburb is under a strict heritage order and it shows; the houses are in pristine condition, each situated on a generously sized block and surrounded by immaculately landscaped gardens.

Certainly, for Sam Crawford Architects’ recent clients, part of the appeal in moving to Haberfield, after previously living in Balmain, was the abundance of space. “They wanted a home that would cater to their needs for a long period of time,” says the practice’s director Sam Crawford. “A place where their four kids could still live reasonably independently when they were older.” So he designed an unabashedly beautiful family abode that considers spatiality as thoughtfully as it does light and materiality by renovating the original four-bedroom 1914 Federation-style home, demolishing a problematic 1990s extension and introducing an open-plan rear addition.

The resulting scheme expresses the clients’ lives in physical form and understands how they might like to live now, as well as considering potential futures they might not yet be imagining. Sam and the project team’s main challenge was the restrictive nature of the area’s heritage provisions and as with all of the practice’s residential projects of this type, his response is sensitive, although his approach is anything but conservative. “Our view is that the new work respects the old by being visibly different,” he explains. “It doesn’t have to be all that radically different, just enough so that a casual reading of the building allows you to see what’s old and new, even with a smooth transition.”

Sam positioned the addition’s entry on the side of the home, tucked away at the end of the driveway and noticeable for its timber batten detailing and curved concrete form. It’s a hint of what’s to come and once inside, the architects’ exquisite control of off-form concrete is used to even greater effect. A curved concrete wall gives the entry a sense of drama and serves as a visual cue for the new living areas, without revealing too much too soon. Moreover, it hugs the north-facing courtyard, creating a quiet outdoor alcove.

This curved wall definitely relaxes both inside and outside spaces and complements the interior’s timber floorboards (which also finish the narrow stair leading up to the small converted attic space), the all-black media room on the other side of the entry passageway and the kitchen’s dark joinery. Pragmatically, the concrete adds much-needed thermal mass to counter the internal loss of temperature control introduced via the courtyard’s glazing and the addition’s full-height retractable glass doors.

While the courtyard was never designed to be an active space, rather an area for the family to look onto, the lounge, dining and kitchen are the new hub of the home. It’s in this zone that the play between inside and outside becomes interesting, with Sam treating the outdoor spaces – the courtyard and the considerable backyard, which connects the addition to the cabana and outdoor dining area at the very rear of the property – in the same way as he would internal rooms. “We’re not blurring the boundaries between inside and outside as much as we’re softening them and treating the indoors and outdoors as one. It just seems an appropriate solution for the site and also reflects the kind of spaces the clients want in terms of being able to enjoy each other’s company, as well as being able to have a sense of separation,” says Sam.

The plan borrows these outdoor spaces to expand the living areas beyond the home’s actual footprint. Lounge, dining and kitchen also visually extend in the other direction, toward the front of the original house, which is now the private zone that accommodates all the family’s bedrooms and bathrooms. The threshold between old and new is subtle yet defined and the existing corridor makes for a grand formal entry, with the first two bays featuring the original high ornate ceiling, while the next two have been renovated with a suspended vaulted skylight.

It’s a device that Sam also uses in the kitchen, not only to introduce natural light into potentially dark pockets, but also to heighten the celebratory feel of the architecture. The skylights’ angles incidentally balance the curved concrete surfaces and offer a sense of nuance by contributing to the compression and expansion of the home’s spatial volumes. This is a good-looking interior and the cathedral-like effect of these vaulted skylights reinforces that. However, for all its dramatic flourishes the overall scheme still remains relatively minimalist in aesthetic, embracing modern family life through a series of elegant interventions, progressive planning and a rich material palette.

Brimming with plants and a large pond, the courtyard is not designed as an active space but as an area to look out to. Artwork: Wanjidari. 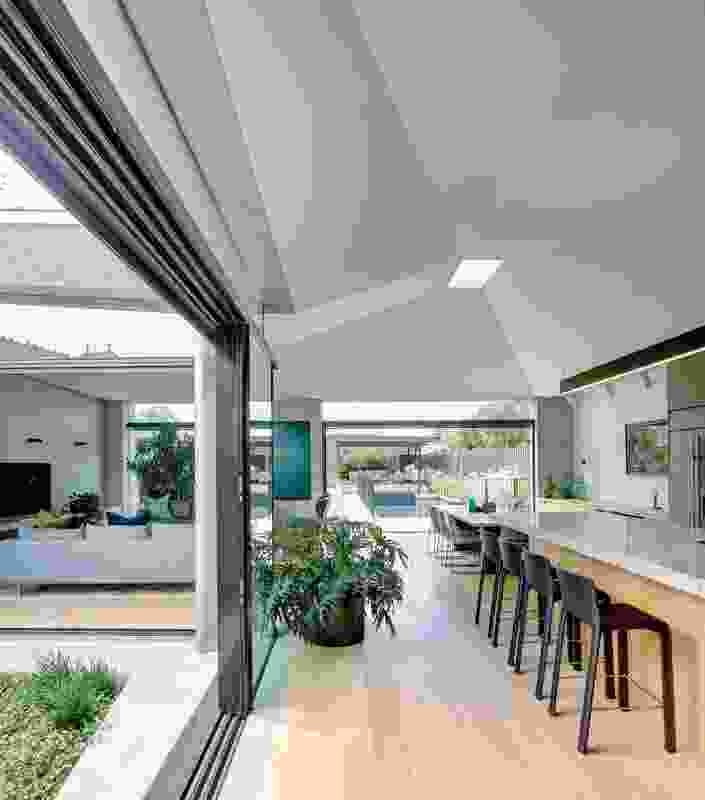 The subtle angles of the vaulted ceiling add nuance to the spatial experience of the living spaces.

The off-form concrete adds thermal mass to counter the loss of temperature via the extensive glazing. Artwork: Martine Emdur. 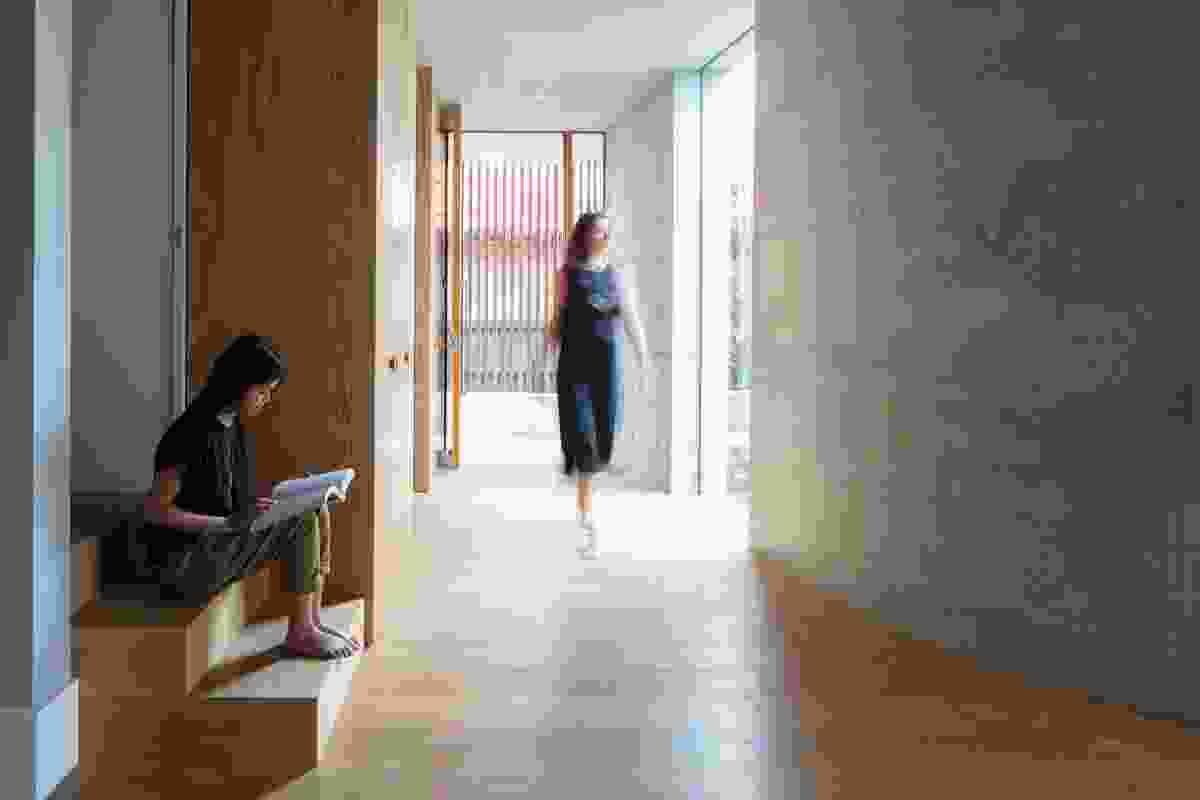 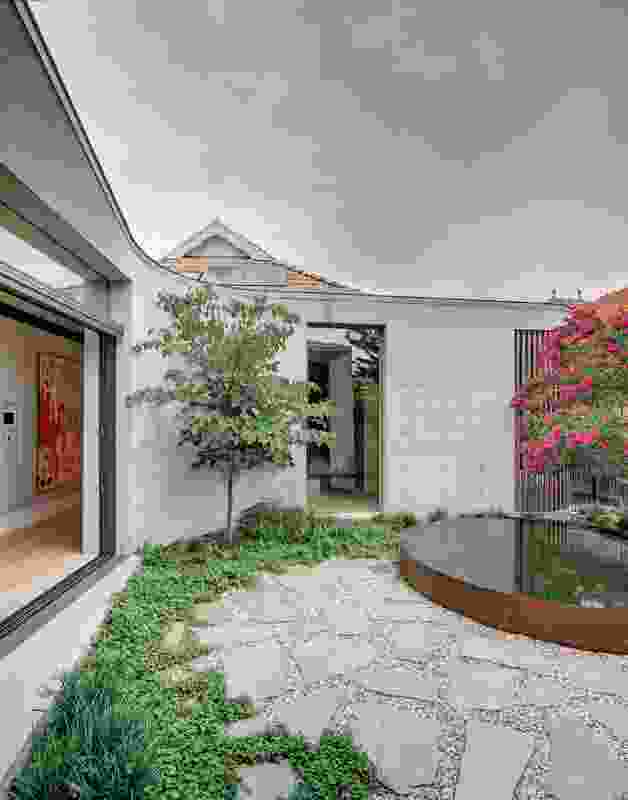 The architects have sought to respect the original house by ensuring the new work is visibly distinct. Artwork: Barbara Moore. 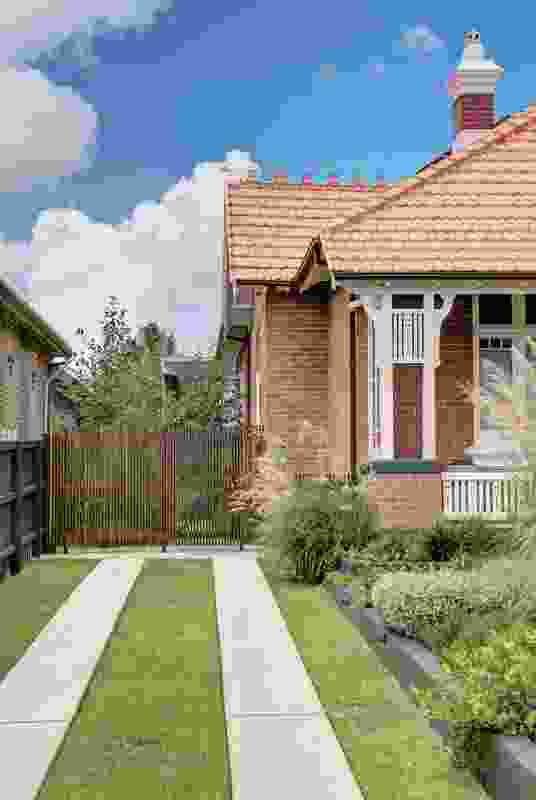 The new timber-batten-and-concrete entrance is tucked away at the end of the driveway. 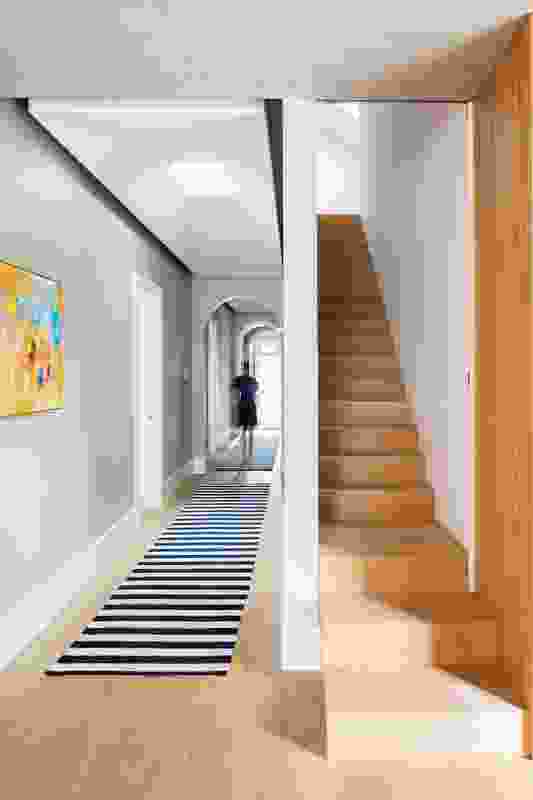 The long corridor of the original house has been retained, with two skylights bringing in new light. Artwork: Laelie Berzon.