For the residential community of Saltwater Coast in Melbourne’s south-west suburb of Point Cook, Tract Consultants has used the landscape as a starting point for the layout of the subdivision.

The Saltwater Coast development, masterplanned and designed by Tract Consultants, is an example of a particular approach to the design of integrated, holistically conceived subdivisions. The design is oriented around tracts of public, open space as a defining feature, and it has established a solid framework for the future evolution of this new suburban place.

The subdivision falls in an ecologically sensitive landscape at Point Cook, a suburb twenty-five kilometres south-west of the Melbourne CBD. The subdivision is bound by Cheetham Wetlands on the north and a local lake system on the south. The eastern extent leads to the edge of Port Phillip Bay, while the western extent leads into Point Cook proper. The designers of this subdivision have taken a different approach to that typically used in our suburban fringe, in that the landscape itself was taken as a starting point for the layout of the subdivision. Tract Consultants was involved in the earliest planning stages, and the subdivision geometry evident in the final development is consistent with the observations made in the earliest stages of site analysis. This contrasts with the approach that appoints landscape architects after the street geometry is laid out – a situation far more typical when designing standard residential subdivisions.

Saltwater Coast’s overall framework has been informed by a close reading of the lie of the land. Saltwater Promenade, a thoroughfare that forms the spine of the development, runs along a subtle ridge in the flat coastal landscape, and from this point drainage lines have been considered as important parameters for the layout of the suburb. The ecological sensitivity of the surrounding landscape means surface run-off must be contained within the development, and as such the design has been formed around a series of wetlands that seek to scrub collected stormwater prior to its discharge into the broader system.

While water management has informed all aspects of the design, the principal wetland area is contained within the central park that extends north and south of Saltwater Promenade. Within this significant landscape space a range of recreational activities are supported, weaving through the wetland and each having a distinctive design. Significantly, the park is oriented to have views of the city skyline across the flats in the distance; on a clear day the city seems to loom over the horizon, and in an optical trick, boats glide by on the bay as if across the surface of the land itself.

Extending out from the central park, Saltwater Coast is broken into thematically distinct precincts, each arranged around public, open spaces of differing kinds. The street layout has been designed so that nearly every street has a view of open landscape, and close access to public, open space. Again, different recreational activities are supported in different locations, from children’s play areas to active exercise spaces.

Within the landscape, native species have been used exclusively, and coastal species favoured to further extend the bay’s-edge thematic. Planting is layered and massed, with a hierarchy of elements from sedges and reeds in the wetlands up to the future feature plantings, the Norfolk Island pines, which are positioned throughout the landscape.

Built form elements in the landscape are largely consistent with references to maritime architecture and infrastructure, with oversized recycled timbers and robust detailing. There is a high degree of consistency across all public spaces in terms of hard and soft landscape elements, and this consistency is such that the marketing material for the development – the story told by developers FKP to sell the lots, as it concerns the landscape – is identical to that told by the designers, something not always the case in residential subdivisions.

It is pleasing to see a subdivision being planned and structured around sound landscape design principles, and the future residents of Saltwater Coast no doubt will be richer for it.

It is pleasing to see a subdivision being planned and structured around sound landscape design principles, and the future residents of Saltwater Coast no doubt will be richer for it. Nevertheless, the framework is somewhat compromised when realized as a place by the rather drab, conventional design of the housing product that marches across the landscape. While it no doubt serves its market admirably well in terms of amenity, there is a jarring discord between the aspirations of the landscape framework, and its realization as a place to live. The impression of discord is, if anything, exacerbated by the appearance of the rather good community hub building, designed by NH Architecture; it is overtly architectural and uncompromising and stands out amongst the architecture of the place.

Of course there is nothing new about this observation. Professional designers have been complaining about suburban architecture for as long as there have been suburbs to fill with architecture, and the designers of Saltwater Coast are not to be faulted for things outside their sphere of influence. Nevertheless, it seems as if this aspect of residential subdivision will continue to place a figurative ceiling on just how good our suburban places can become. In the meantime, we can hope that a maturing landscape will cover a great many sins. 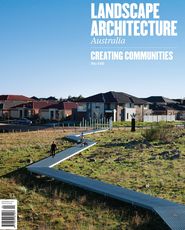 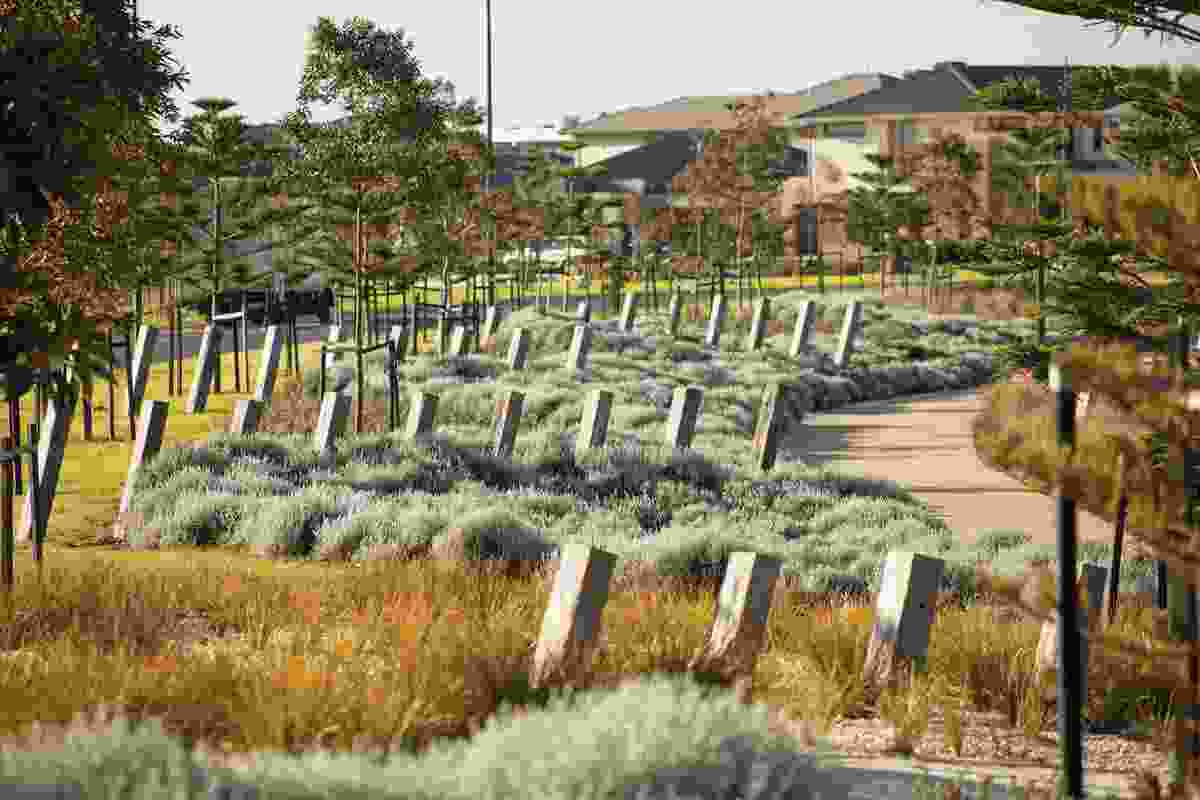 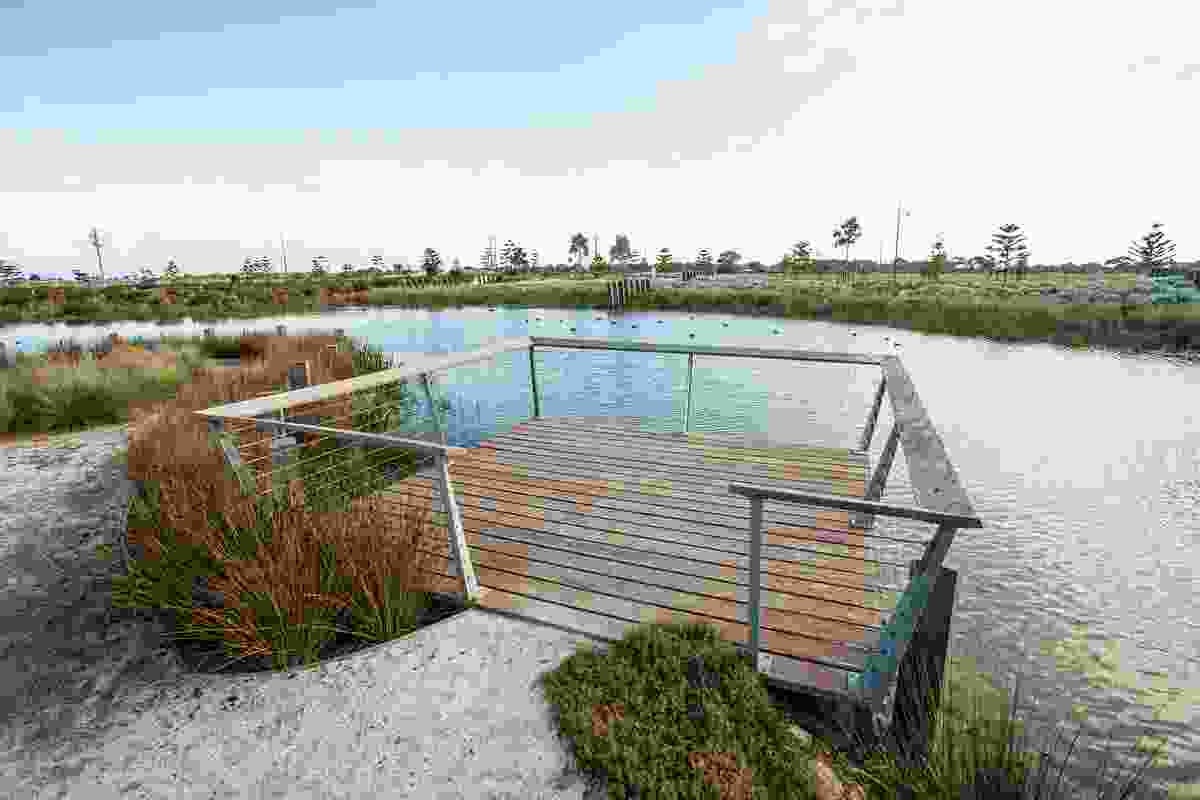 Twenty-five percent of the development is parkland, providing residents with fifty hectares of open space to enjoy. 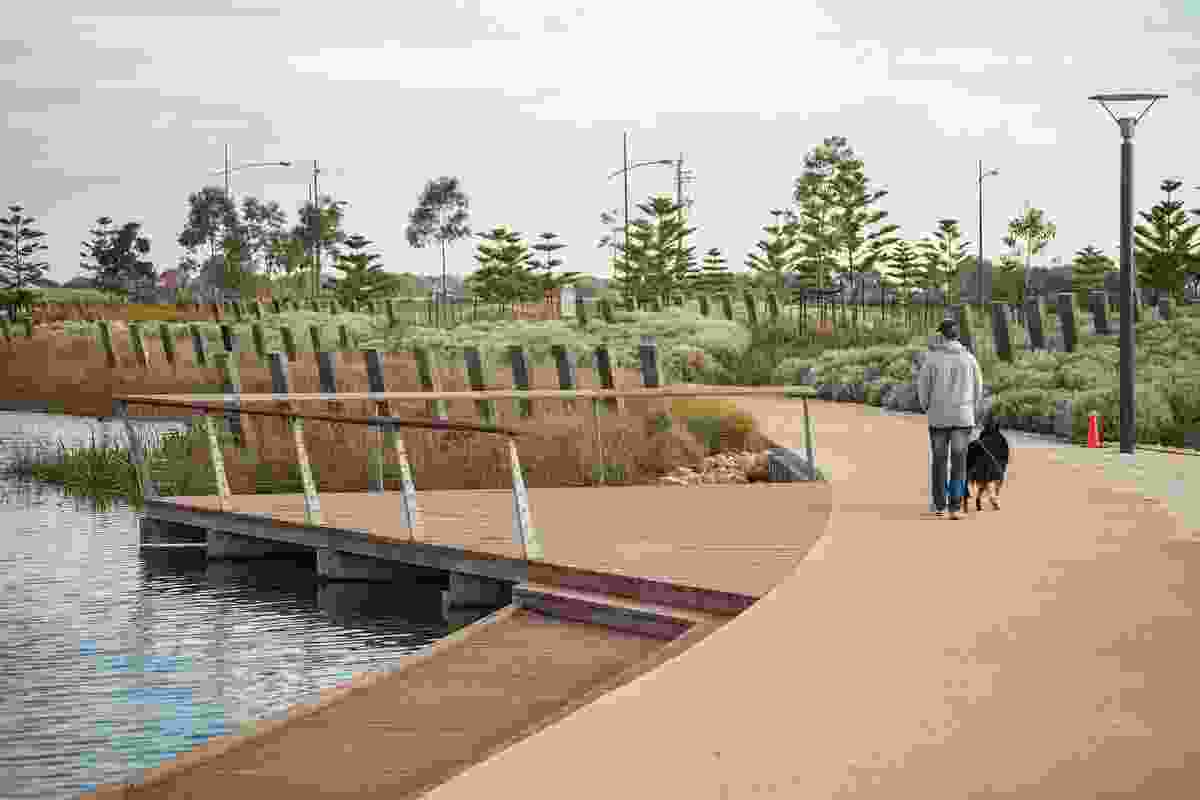 The wetland areas and parks feature walking paths and timber platforms leading to the water’s edge. 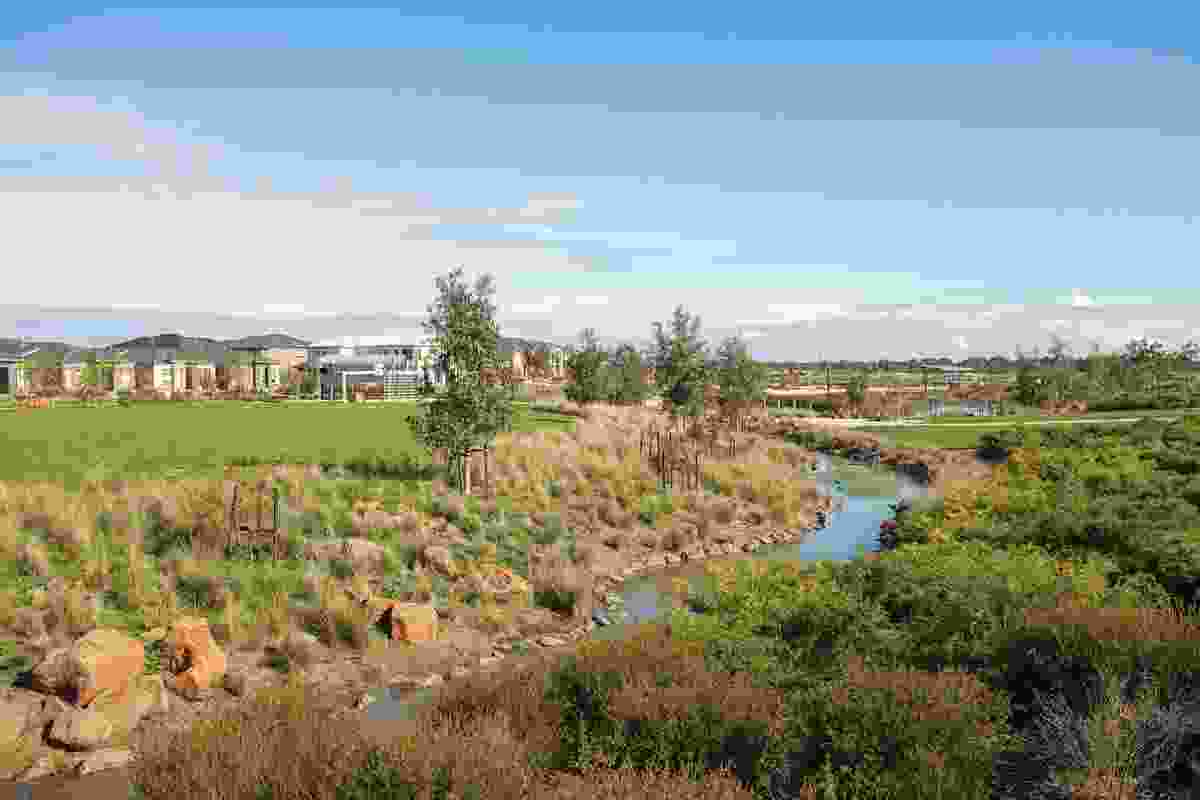 A series of wetlands aims to scrub collected stormwater prior to its discharge. 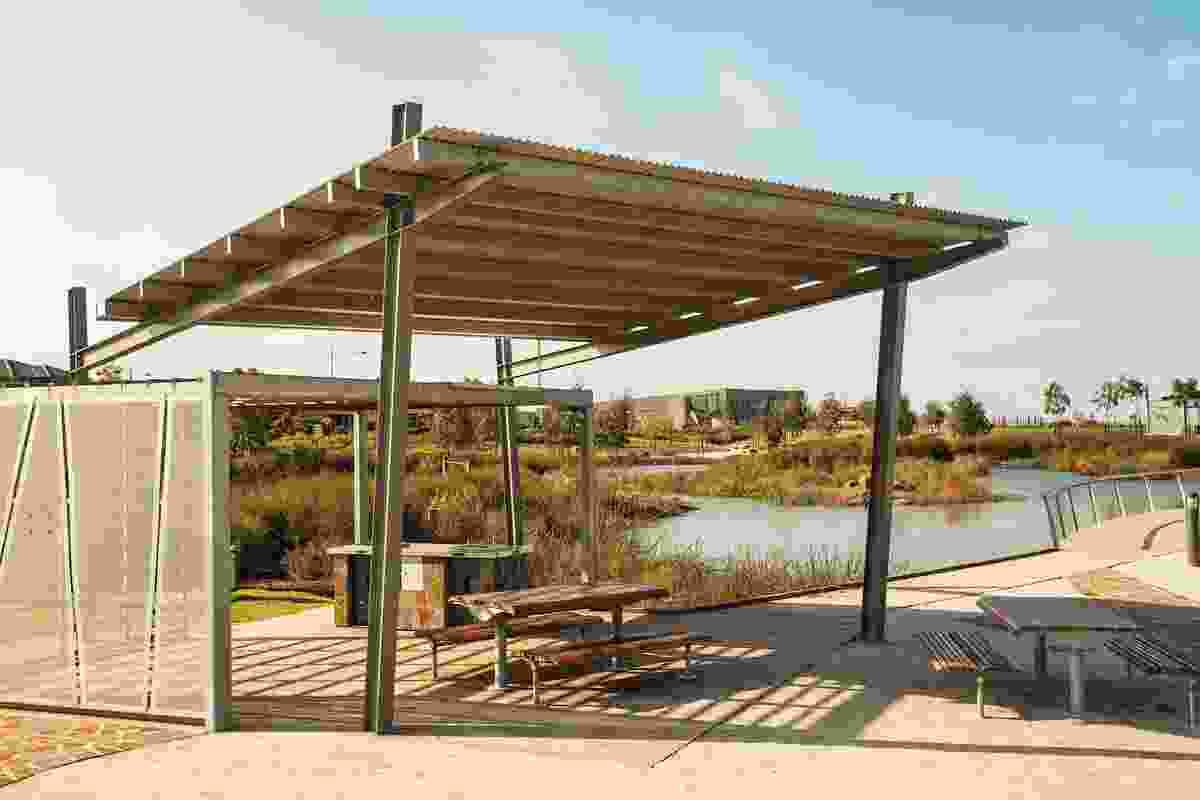 Picnic and barbecue areas are located next to water and scrub land. 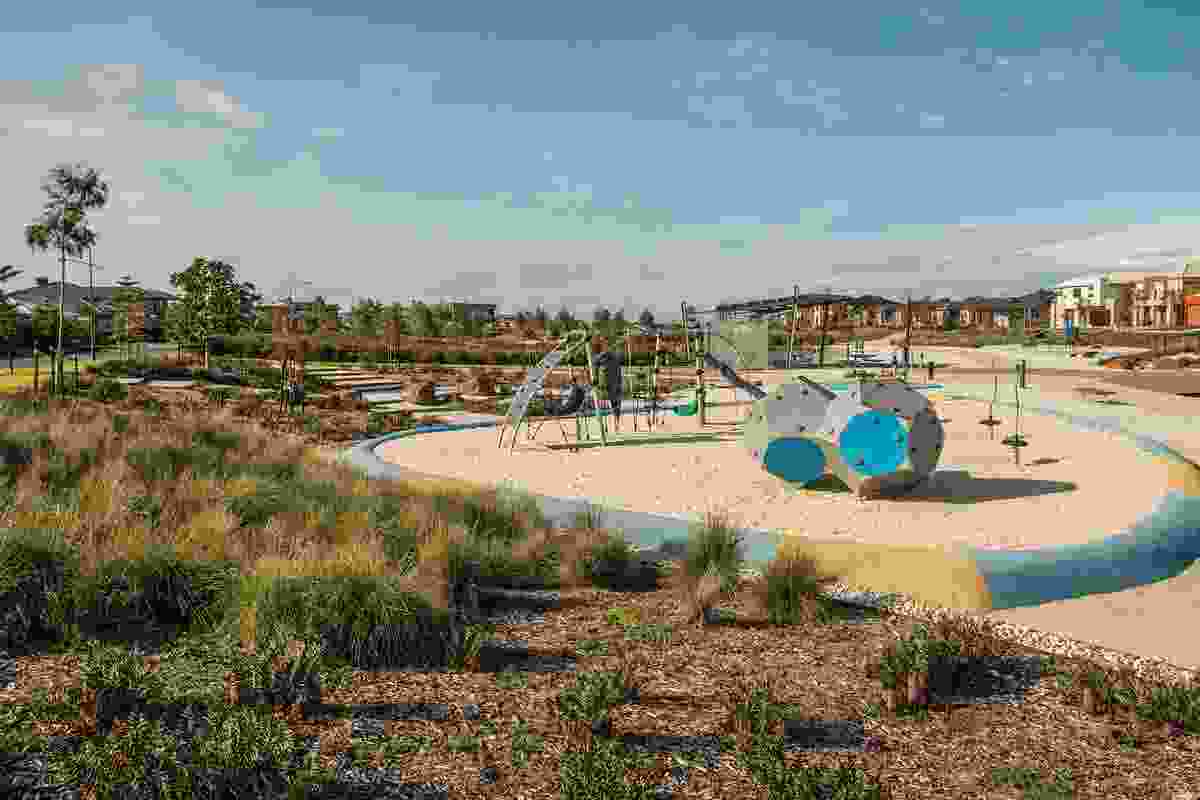 Play areas and active exercise spaces are provided for recreational use. 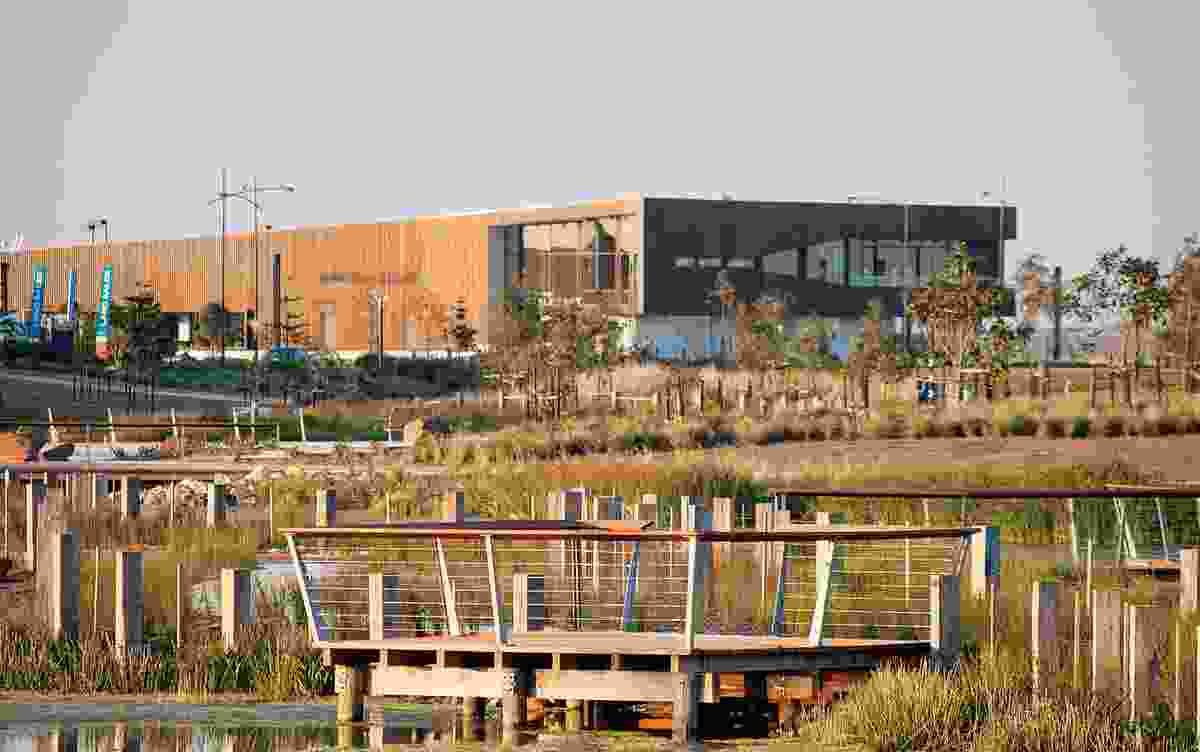 The community hub building was designed by NH Architecture. 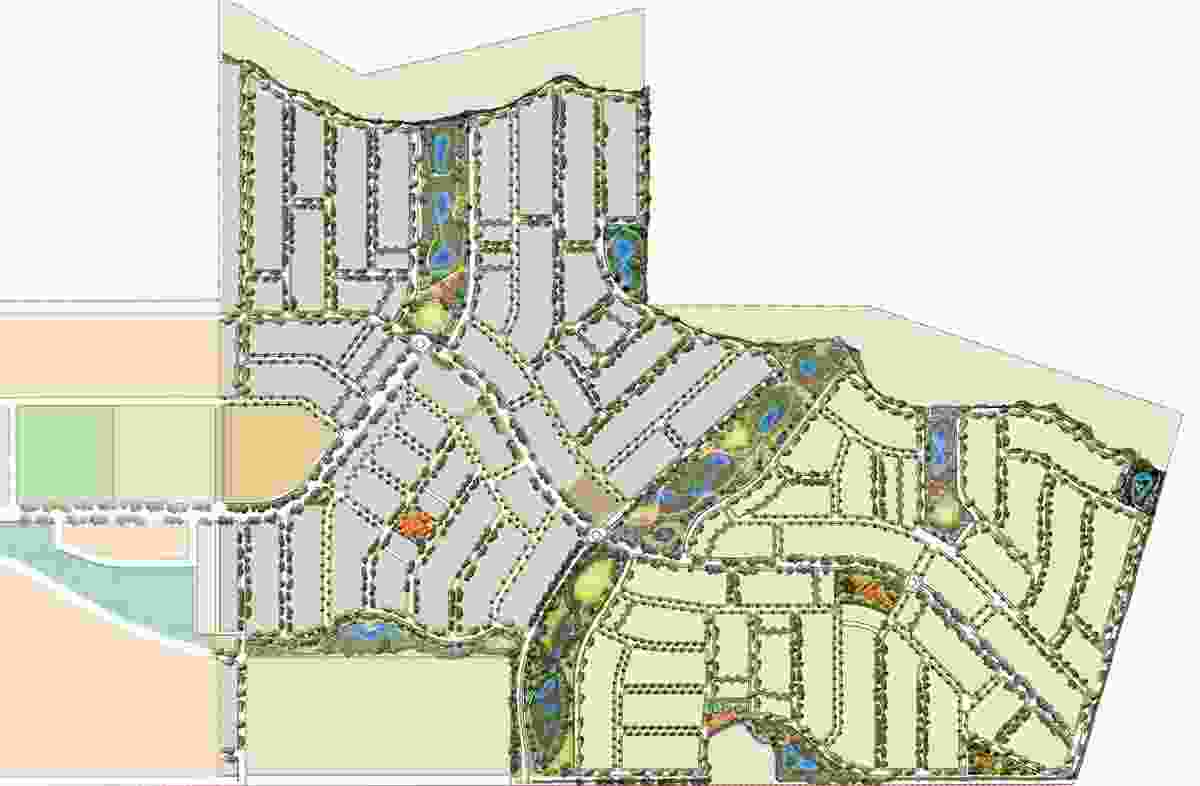