When a family friend bought a property in southern New South Wales, Penny Collins and Huw Turner, of Collins and Turner, jumped at the chance to design. Here, Penny and Huw reflect on their first house together, a pristine object in the landscape.

Imagined as a pure form in the landscape, the design for Bombala Farmhouse captures the minimalist aesthetic of modernist artworks.

We met in Frankfurt in 1993 working together on Foster and Partners’ Commerzbank tower – the tallest in Europe at the time and the first with a concerted environmental agenda.

In January 1994, we visited Australia (Huw’s first visit and for Penny a return home). While there, we had lunch with a family friend at Whale Beach in Sydney. His father and Penny’s father Ian had an architectural practice in the 70s and 80s – Rourke and Collins. He mentioned that he had purchased a grazing property on the Monaro in southern New South Wales (close to Penny’s grandparents’ property near Nimmitabel) and was looking to build a small house there. He’d contacted Glenn Murcutt and was baulking at the famous waiting list. Like a shot we offered to sketch up some ideas. We visited the site the following week before flying back home.

The site was six hours south of Sydney, our friend (and now client) was living in New York and we were heading back to Europe; luckily, we were accustomed to designing for distant sites and clients.

Living in Germany, we spent our free time visiting buildings and galleries. We were drawn to the work of artists such as Donald Judd and Erwin Heerich, which crossed the threshold between art and architecture. We wondered if our little project on the other side of the world could capture a similar spirit, “a specific object” to use Judd’s term.

The brief described the building as a retreat, a secular contemplative space to look at art, listen to music and switch off. The client found the perfect location in a clearing in the bush with a gun-barrel view down to the dam and hills beyond. We positioned the house so that cars approaching by a new access road would disappear – a simple shed in a paddock.

The client has a heightened design sensibility, and had visited Phillip Johnson’s iconic Glass House in the USA, which he admired. We planned the house as a single room. A services pod would divide the living and sleeping areas – the house that Penny’s parents had built in the 70s had a similar plan. We went all the way and hid everything we could. Fridges, ovens and storage were all behind panels with discreet finger pulls. The kitchen became two simple stainless steel benches floating off the walls. We even hid the toilet, like an old-fashioned thunder box.

Some of the client’s decisions surprised us – no verandah and no fireplace. This allowed us to imagine the house as a pure form, almost indistinguishable from other rural structures viewed from a distance, but revealing other qualities on closer inspection.

Thermal comfort was debated at length during the design process. Initially the large north facing facade was conceived as a ventilated double-skin glass wall. In one of the coldest regions of Australia solar gains are generally welcome, and the client dictated that internal blinds would have to suffice.

We persuaded Penny’s father Ian to be our architect-on-the-ground. Back in London we were both running jobs at Foster’s during the day. We would work into the night on the drawings, and wait forever for drawings and photos to transfer via dial-up internet.

We researched builders in the area and found John Fielding of Bellevarde in the ACT. John had built Murcutt’s Bingie Point house, and we thought that if he could build that house in such a remote location then he could build this project. It turned out his workforce was occupied on projects in the Snowy Mountains and they would have a short window of availability during the upcoming ski season. The house was built in sixteen weeks, the majority of it prefabricated off-site and transported in.

The house is still a pristine object in the landscape. The art collection within has grown and evolved, and been a backdrop to many memorable dinners for locals and visitors from all over the world. Since signing off on Bombala Farmhouse we have completed three more projects for the same client in the UK and Australia. We always enjoy the process of designing with the client, and now with his wife and family; it’s been a cornerstone of our friendship.

The house is still a pristine object in the landscape. The art collection within has grown and evolved, and been a backdrop to many memorable dinners. 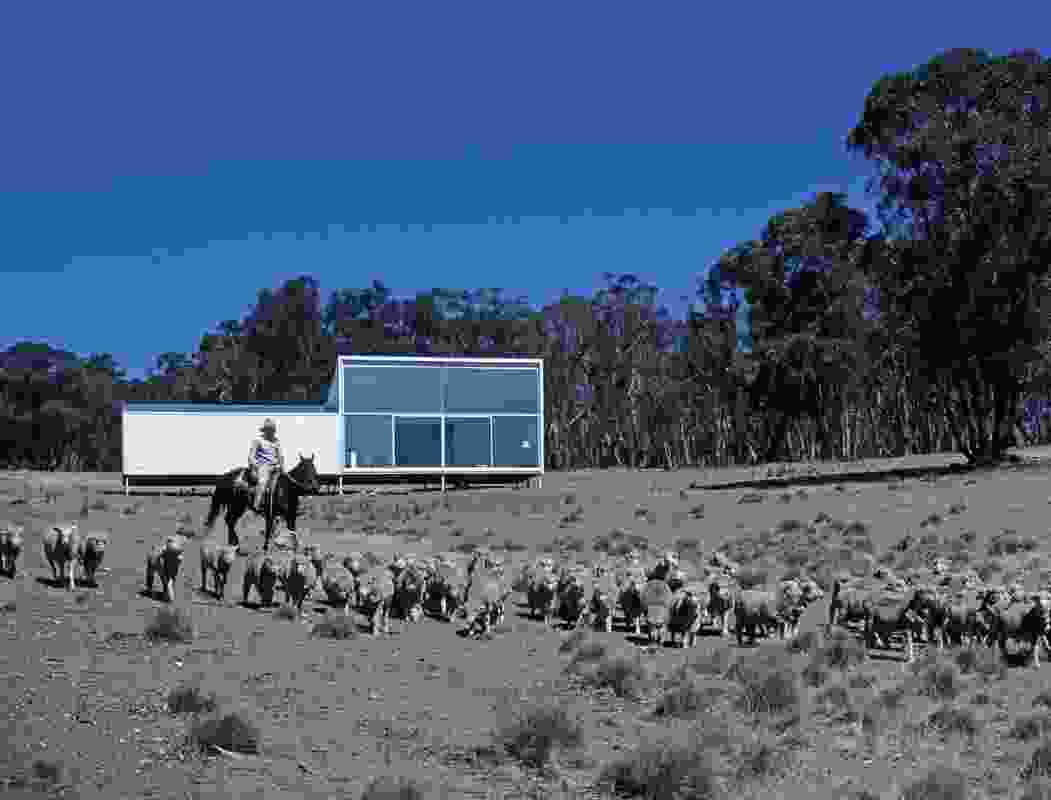 Imagined as a pure form in the landscape, the design for Bombala Farmhouse captures the minimalist aesthetic of modernist artworks. 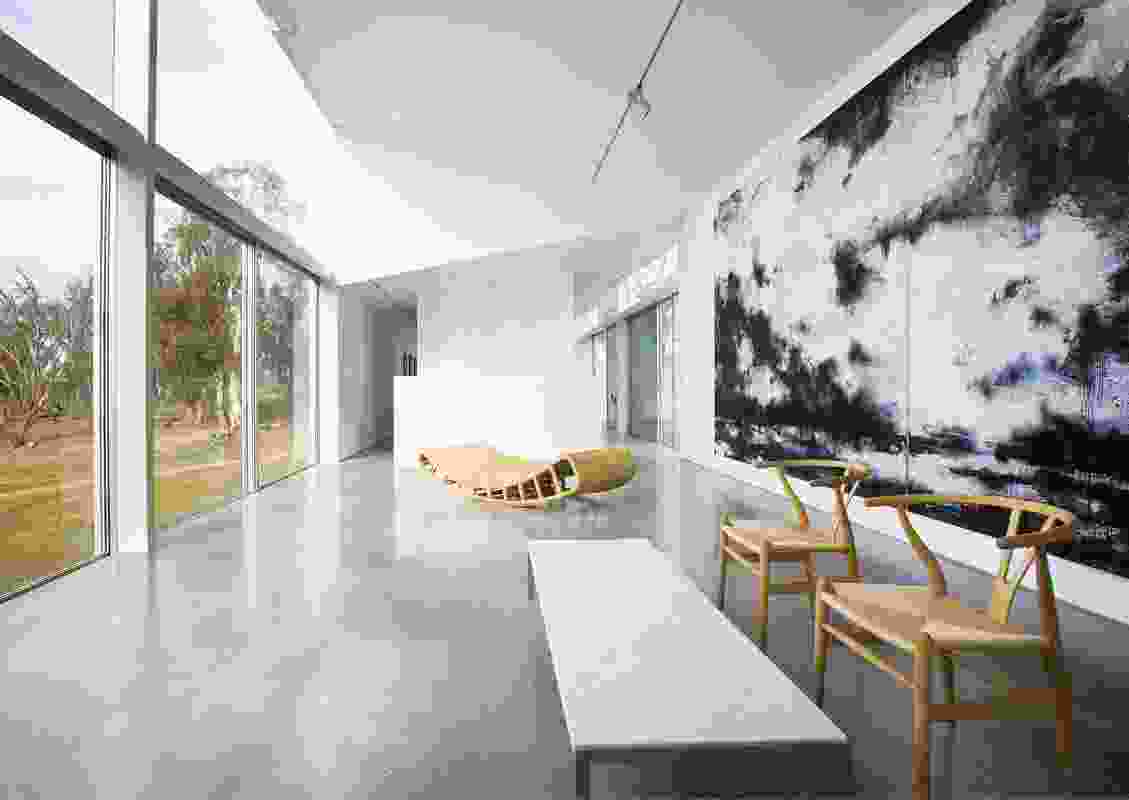 The home is a retreat for the owners – an uncluttered space for “switching off.” Artwork: John Virtue. Two cantilevered stainless steel cabinets comprise the kitchen, while larger appliances and the pantry are neatly concealed in a sleek, white joinery wall. 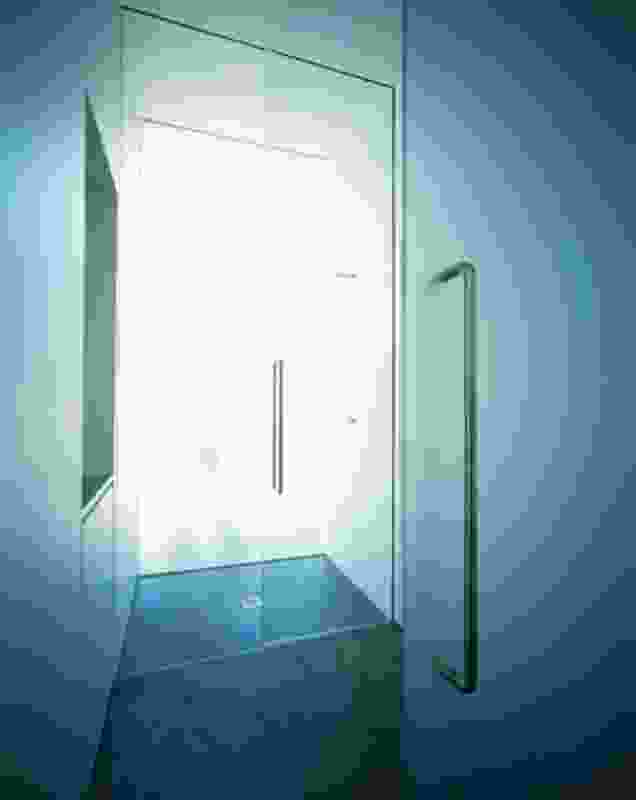 The bathroom borrows light from the large picture windows and forms part of a services pod that separates the living room from the bedroom. 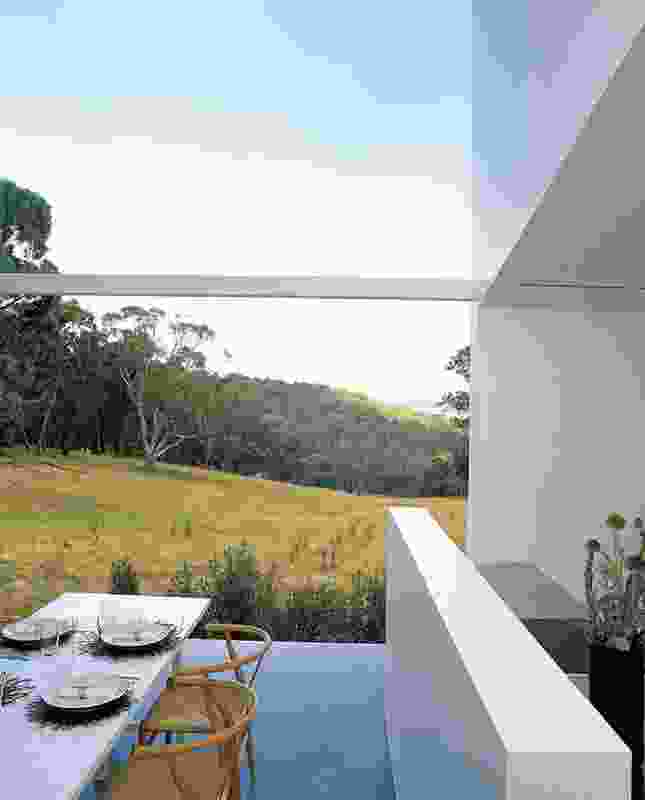 The house is sited in a clearing in the bush, capturing a gun-barrel view to the dam and landscape.